One would think this a major news story, a story with, as they say, legs. A madman drives through a Christmas parade, wantonly killing young and old alike. It’s horror on main street, a horrific attack on middle America, on American values. But no. It didn’t fit any social justice narrative. In fact, it obliterated them and threatened to call attention to D/S/C’s deadly pro-criminal policies.

The killer, you see gentle readers, was not a white supremacist, not a racist, not a transphobe or homophobe, not a hater of minor attracted persons. He was not at all sympathetic—to sane people. The killer wasn’t even gay or trans. He was a violent black felon, and the people he murdered were white. The media doesn’t care about them. There were no political points to be made, no one to cancel, no one to hate, no money to be made, no lying to be done in Congress, no blaming guns, none of the essential elements of the preferred narratives. Oh, they could have blamed SUVs—that’s what the killer used to murder—but for some reason, they couldn’t, surprisingly, stoop quite that low.

So most of the media made an initial, tiny, report, and then, apart from a few stories about the killer’s bizarre courtroom antics, dropped it. They couldn’t even bring themselves to trot out their most reliable tactic: blaming Donald Trump, at least not in a way anyone would notice. Brietbart reported on the killer’s arrest and background:

According to Wisconsin court records, a 39-year-old Darrell E. Brooks of Milwaukee has one pending charge of felony bail jumping and one charge of felony 2nd degree recklessly endangering safety with domestic abuse assessments. He also has one misdemeanor charge of resisting a police officer, disorderly conduct, and battery. The alleged offenses occurred on November 2, 2021; this same Brooks was released on a $1000 bond on November 19 – just two days before the attack. AP has linked these court records to the person identified by their law enforcement sources.

Police reportedly discovered Brooks’ ID in the red Ford Escape they recovered after the incident. 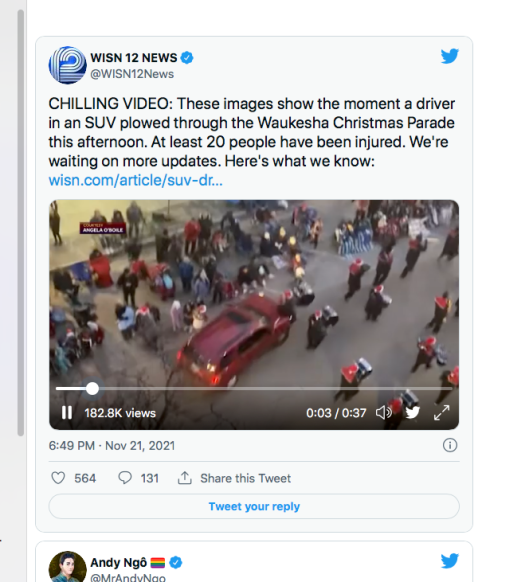 One witness told WISN that the driver hit the ‘Dancing Grannies,’ where at least ‘one person flipped over the hood of the SUV.’ The driver kept plowing and did not stop. One witness estimated that the vehicle was traveling at 40 miles per hour.

‘There were moms and dads yelling for their kids, people running around,’ one witness told Fox News Digital. ‘When I rewatched the video, I could hear people talking, and they were like, ‘There’s eight people injured down there. We need an Ambulance over here.’ There’s one lady kneeling on the ground crying.’

‘He’s just blowing through people, kind of just dinging a lot of people, bodies flying everywhere,’ Kowalski said. ‘These people didn’t get run over, they got f***ing thrown through the air. Like a lot of people got tossed up into the air.’

‘You could see the fragments of brains,’ he added. ‘There were quite a few people with broken limbs, like a lot of broken legs, a lot of people shouting with broken legs. It was horrifying.’

As one would, sadly, expect, D/S/Cs tried to blame the attack on Kyle Rittenhouse–he had been acquitted days earlier–and Americans who recognize the unalienable right to self-defense:

Lemanski was far from the only D/S/C making similar comments. Surprisingly, the Wisconsin Democrat Party quickly distanced itself from that kind of “hate.”  The media’s ignoring of the reality of the attack was necessary, in part, to cover prosecutorial misconduct:

Once the suspect, Darrell Brooks, Jr. was identified, the story became clear. Brooks was a career criminal (or a repeat offender, however you’d like to classify him), most recently accused of ‘running over the mother of his child with a vehicle in a gas station parking lot’ on November 2. On November 5, he was charged with ‘second-degree recklessly endangering safety with domestic abuse assessments, disorderly conduct with domestic abuse assessments and felony bail jumping.’ At the time of these offenses, he was already ‘on bail after being accused of shooting at his nephew in July 2020.’

In other words, Brooks had already attempted to kill his nephew and his baby’s mother. He was a flight risk and a danger to the community. On November 19, the Milwaukee County District Attorney’s Office let him go on $1,000 bail.

Days later the firefighters were hosing down the blood off the streets.

The release of a violent felon on $1,000 bail was the culmination of years of ‘reform’ by Milwaukee County District Attorney John Chisholm, who was touted in 2015 as a ‘national leader in law enforcement’ – at least according to progressive values. As promoted by the liberal Vera Institute:

‘Prosecutors have to redefine their proper role in a new era. Chisholm stuck his neck out there and started saying that prosecutors should also be judged by their success in reducing mass incarceration and achieving racial equality.’

The wholly preventable murderous rampage in Waukesha wasn’t the first time Chisholm’s policies caused lives to end. And Chisholm predicted this back in 2007, where he stated:

‘Is there going to be an individual I divert, or I put into treatment program, who’s going to go out and kill somebody?’ Chisholm said in a 2007 interview with the Journal Sentinel. ‘You bet. Guaranteed. It’s guaranteed to happen. It does not invalidate the overall approach.’

A Milwaukee Black Lives Matter activist said the Christmas parade attack in Waukesha, Wisconsin, appears to signal ‘the revolution’ may have begun.

‘I don’t know. Now we’ll have to wait and see because they do have somebody in custody. We may have to wait and see what they say about why this happened,’ Vaun Mayes said on Facebook Live on Monday. ‘But it sounds possible that the revolution has started in Wisconsin. It started with this Christmas parade.’

As The Washington Free Beacon reported, the media continued to ignore the attack:

Wednesday’s edition of the Washington Post included a brief mention of the mass-death event in the bottom left-hand corner of the front page. The New York Times similarly downplayed the significance of the ‘6th Death in Wisconsin Crash.’ 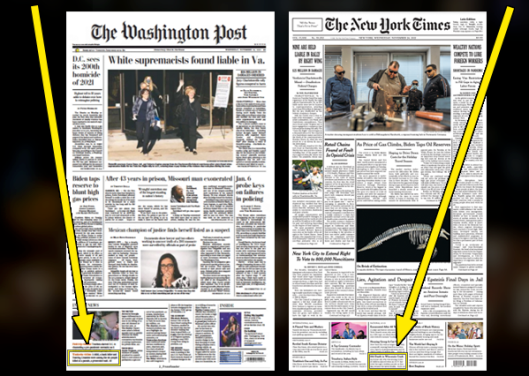 CNN, meanwhile, was not featuring a single story about the Waukesha tragedy on its homepage as of Wednesday afternoon. The news network, however, did prominently feature an ‘analysis’ piece headlined ‘Biden spins a message of hope as an anxious nation readies for Thanksgiving,’ as well as a report that former president Donald Trump ‘now has a ninth-degree black belt in taekwondo.’

Brooks initially plead not guilty, but later changed his plea to not guilty because of mental illness. He was soon found competent to stand trial, and represented himself.

The trial frequently degenerated to farce as Brooks harassed and abused victims and witnesses, and even threatened the judge. He had to be removed from the courtroom on several occasions.  Finally, Brooks was convicted:

Darrell Brooks, 40, received six consecutive life sentences without the possibility of parole on Wednesday for driving an SUV through a crowd at the Waukesha, Wisconsin, Christmas parade last year, killing six victims and injuring 61 others.

The aspiring rap artist was convicted on October 26 on six counts of first-degree intentional homicide and 61 counts of reckless endangerment, bond jumping, and battery for a total of 76 charges.

When Waukesha County Judge Jennifer R. Dorow handed down each life sentence, reading the names of each victim, the courtroom applauded. He was also sentenced to 17.5 years in prison on each endangerment count.

Before being sentenced, Brooks was removed to another courtroom to participate via video because he had become disruptive during the hearing, the Associated Press (AP) reported. 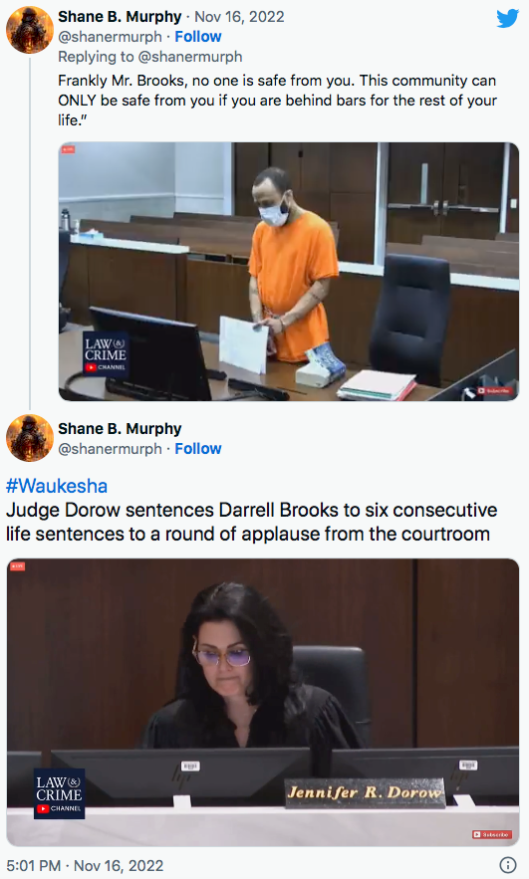 ‘Frankly, Mr. Brooks, no one is safe from you,’ she told him directly. ‘This community can only be safe if you are behind bars for the rest of your life. … You left a path of destruction, chaos, death, injury, and panic as you drove seven or so blocks through the Christmas parade.’

Brooks, who chose to represent himself in the trial, claimed that he had a history of mental health issues and experienced a difficult childhood while growing up. He then later apologized to the victims’ families.

Dorow dismissed Brooks’ claims that he was mentally ill, noting that four psychologists who had evaluated him earlier diagnosed him with an anti-social personality disorder but no mental illness.

‘It is my opinion that mental health issues did not cause him to do what he did on Nov. 21, 2021, and frankly didn’t play a role,’ Dorow said on Wednesday ‘It is very clear to me that he understands the difference between right and wrong and he simply chooses to ignore his conscience. He is fueled by anger and rage.’

On Tuesday, prosecutors asked the judge to give Brooks the maximum sentence for all the convictions he received last month.

‘You saw the videos. This wasn’t him plowing into one large group of fifty people at one time and hitting them. It was linear. He hit one, kept going. Hit two, kept going. Hit three, kept going. All the way down the street. That’s consecutive sentences, your honor. That’s intentional, willful, volitional conduct that warrants consecutive sentences stacked one on top of the other just as he stacked victims up as he drove down the road in complete disregard for any other person whatsoever.’

He never explained his motive for his homicidal actions during the trial.

Brooks’ trial was full of disruptions due to his frequent outbursts, which forced Dorow to remove him from the courtroom multiple times, where he would participate via video.

During a pre-trial hearing in August, Brooks was removed from the court after launching a verbal tirade toward Dorow, Breitbart News reported.

Then in October, before the prosecution team was about to read Brooks’ lengthy criminal history, he slammed his hands on the table in front of him and started to stare down Dorow in a menacing manner. The judge paused the trial due to his behavior.

‘I need to take a break. This man right now is having a stare-down with me. It’s very disrespectful. He pounded his fist. Frankly, it makes me scared,’ Dorow told the court at the time.

Can you imagine, gentle readers, the media outcry had this happened during Trump’s Administration, should he have failed to immediately visit Waukesha? The citizens of Wisconsin will spend hundreds of thousands, perhaps millions, of dollars to keep Brooks alive for decades. Surely, he will eventually take his place in the pantheon of holy social justice martyrs. 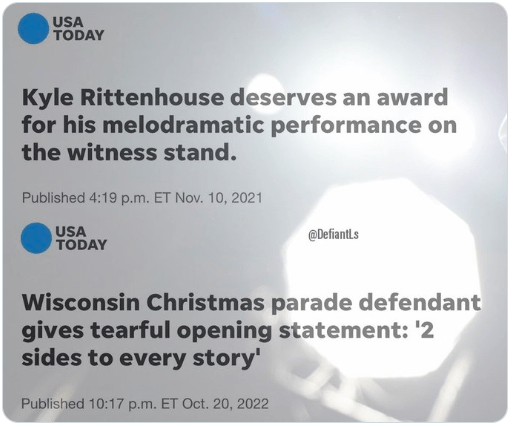 Instances of D/S/Cs denying justice and coddling criminals are now so common as to be unremarkable. But what this case demonstrates is it is not possible to think too lowly of our corrupt, stupid and in many cases actually evil media. Brooks will continue to be pursued by innumerable demons. Tragically, so will the citizens of Waukesha, forever reminded by merely treading the sidewalks and driving the asphalt of their Main Street. No Christmas parade will ever be quite the same.

This is almost surely not the end of this immorality tale. There will be appeals, and since this is Wisconsin, it’s possible Brooks may be given a new trial, or his convictions overturned. Would that be surprising, circa 2022? It is cases like this, and the response of so many D/S/Cs, that makes sane Americans wonder if it is any longer possible for America to endure. With something approaching half of the country possessed of such hatred and insanity, is a national, messy divorce inevitable?

And American life in the Biden Meat Puppet Administration and the age of woke lurches on.

11 thoughts on “The Waukesha Massacre: Harbinger Of A National Divorce?”