During my police years, I learned a great many things about human nature, which is why I generally expect the worst of people, but am open to being pleasantly surprised.  Among the most important of those lessons is what addiction does to people, actually, what their choice to become addicts does to them.  Without personal responsibility, we’re lost. Addicts, particularly cocaine and/or heroin/opioid addicts are absolutely untrustworthy and unreliable.  They will betray anyone and everyone.  They may hold a job for a time, but they are incapable of doing any useful, productive work.  Their minds—what’s left of them—are so muddled and impaired, they lose everything, including things of great value.  They harm everyone around them on their way to the bottom.

That’s why this article by Christian Alexander is so pertinent in these opening days of the temporary Biden Administration, which may be the beginning of the middle of the end of our Republic.  Christian Alexander transmogrified from a Never Trumper to a Never Biden voter, because like Hunter Biden, he was a cocaine addict.  Why is this significant?  Primarily because it is nearly as hard as overcoming an addiction to rise from the depths of Wokeness to reality, but also because it actually takes one to know one, and not only does Alexander know Hunter Biden, he knows the corrupt relatives—that’s Gropin’ Joe—who enable, and even use a coke addict for their own purposes.  Ironically, it was his addiction that allowed him to see the truth, and to act on it.  Let’s begin with some excerpts:

Note: this, and all following graphics are from Alexander’s article

Hunter served on the Burisma board from April 2014 until April 2019.

Here is what was going on in his life at that time:
Feb 2014 — discharged from Navy for cocaine use
Jun 2015 — Beau Biden’s funeral
Jul 2015 — checks in to Caron Treatment Centers
Aug 2015 — his name is among those leaked in Ashley Madison data breach
Oct 2015 — Kathleen Biden files divorce
Feb 2016 — checks in to Kolmac Outpatient Recovery Center
Aug 2016 — begins dating his dead brother’s widow
Oct 2016 — checks in to Grace Grove
Jan 2018 — gets stripper pregnant

I have no doubt, in my own heart, that Hunter couldn’t function in any way amid circumstance like these, and I think this timeline establishes that pretty clearly.

Alexander’s complete article—you must read it—notes Joe Biden pulled multiple strings to get Hunter a naval direct commission, which he blew by failing a drug test one month later.  Hunter was making some $80,000 a month working for Burisma, which is nearly a million dollars a year for five years.  Not bad for someone who doesn’t speak the language, has no connection to Ukraine, and has no experience whatever in the energy sector.  Like Alexander, it’s clear to me Hunter was non-functional during those years, but pulling in money hand over fist for no work at all.  This is interesting:

Hunter has a divorce and a drug habit, and then some…

A quick question… where is all this money coming from?

That’s a very good question.  Alexander does not go into Hunter’s and “the Big Guy’s” Chinese money making ventures, but the rest of the pay for play schemes in other countries are bad enough.  Gropin’ Joe Biden is, without question, compromised.  In a functioning country, someone like him would never be allowed to be in the lowest position of power and access, to say nothing of the presidency.  And of course, the D/S/C propaganda arm media has covered for Hunter, because it’s necessary to protect Joe, which is necessary to get Kamala Harris into the White House: 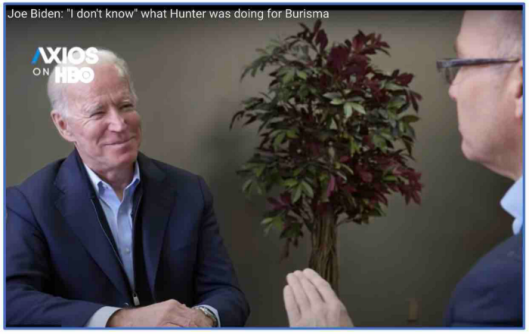 Lying Through His Dentures

The media have gone so easy on Biden, dancing around Burisma. George Stephanopoulos, who ran Bill Clinton’s presidential campaign in 1992 and subsequently became White House communications director, didn’t come near this one at that ‘Wag the Dog’ debate the other night. My mom asks me tougher questions these days, ‘Christian, what did you have for dinner?’ The entire press corps have given Biden a 6 month ‘get out of jail free card’ on this obvious hot spot, and that’s precisely because they know it is a hot spot.

This is the one, and only, time Biden has been pressed on this subject. Give it the 2:17 it deserves. The answers are horrible. And absurd. And dishonest.

This is what flipped me to Trump:

Question: Hunter Biden, your son, was getting paid a lot of money to serve on the board of a Ukrainian energy company facing serious corruption charges. You were the Vice President, running point on the Ukraine. The Average Joe hears that and says ‘that sounds fishy.’ What’s your understanding of what your son was doing?

Re-direct Question:Well you’ve had a lot of time, isn’t this something you want to get to the bottom of?

Answer:No, because I trust my son.
[This is where he lost me forever. There is a joke told in rehab: what’s the difference between a drug addict and an alcoholic? The drug addict will help you look for your wallet. I pawned my ex-wife’s jewelry and told her I was having it cleaned. You shouldn’t have trusted me any further than you could have thrown me back then. He doesn’t trust his son — that’s total BS. And if he does trust his son, after 30 years of drug addiction, then he’s the dumbest man on the planet. But the American public absolutely should not be asked to trust a drug addict. Period. This answer is manipulative, evasive and totally dishonest.]

Re-direct Question: That doesn’t pass the smell test, like when you’re Vice President, isn’t there a higher standard? Don’t you need to know?

Answer:No! Unless there was something that is on its face wrong. There’s nothing that was on its face wrong.
[Another barefaced lie.Everything is wrong on its face here. As Vice President, he was assigned to the Ukraine. His son, meanwhile, has a huge conflict of interest in a job with a Ukrainian oil company that pays him way too much, and that he is unqualified for, and that he absolutely cannot perform due to the disability of his drug addiction. Everything is wrong with that.]

Answer-continued: Look, if you wanna talk about problems, let’s talk about Trump’s family. I’m mean come on! This is, you guys are amazing… [sneer]
[His here deflection implies this: ‘ok, yes, fine, we are corrupt, but so are they!’ His anger betrays his guilt. The reason there is no answer, is that there can be no answer. Joe Biden has been bought and sold.]

Is Alexander right?  Is Joe Lying when he says he trusts Hunter?  Joe pulled every string in the book to get Hunter a naval commission, which if he served honestly and honorably, would provide him a lifetime pension and considerable prestige.  He blew it within a month, and would have blown it sooner if he had been drug tested sooner.  Joe is far from a bright guy, but he can’t possibly be so stupid as to think Hunter is trustworthy, not after years of addiction.  He did, however, recognize Hunter’s value as a meal ticket.

Remember the narrative about Hunter’s laptop being a Russian plant?  Alexander explains: 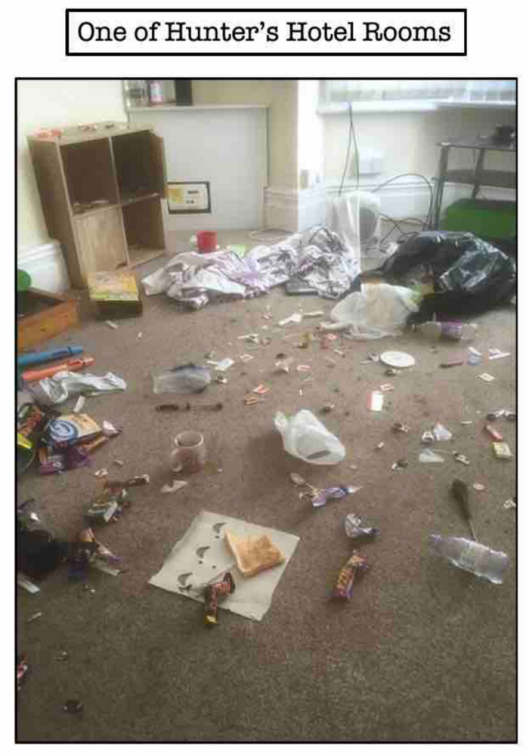 The decision whether to report this story, if it was being made on reporting standards rather than political judgments, would hinge on, was it legally obtained and is it authentic.

Where did this laptop come from? This is when my heart fell to my feet. He left it at the repair shop. When Giuliani said it, I got the chills. I did the exact same thing during my addiction. Drug addicts do things like that all the time. You’re always looking for the immediate solution. The laptop is soaked? Give it to the repair place across the street from hotel. Then check out of the hotel a week later and forget all about it. Go buy a new one at the nearest store and abandon the old one. Have you ever stayed awake for 5 days on 10gr/day of cocaine? That how you act, every single day. See below one on the images found on Hunter’s laptop, of a room, after he was done with it.

Hunter is a drug addict. Remember, Hunter wrecked a car, got a new one and returned it with drugs, a crack pipe, and Beau AG badge on the dash before he ran off to spend time with his brother’s widow? You think he was making good decisions?

There are probably 10 to 20 more lost laptops floating around out there in various hotels and airports and taxis… this is just the first one to surface in the ‘wrong’ hands.

Alexander is absolutely right.  Addicts are infamous for being unable to remember anything—this helps make them easy to arrest and convict—and for making a complete shambles of all of the little things we all must do every day to live a reasonably orderly, functional life.  Drug using crooks often leave all manner of incriminating things lying about.  Also telling is buying a computer is a substantial expense for most Americans.  Simply losing one and buying another again raises the question of where Hunter was getting all that money. But what about Joe?

Drug addicts are not fit for work, and if Joe Biden putting his son to work while he was in downward spiral is what gets him busted, well then, it would be just desserts. If Biden was any kind of father, he should have cut his son off a long time ago and said, ‘Call me back when you get sober kiddo.’

Trump might be a jerk, but he doesn’t treat his kids like that. Trump may be a jerk but he never sold American influence for a price.

Apparently the media prefers a soulless fraud with a nice pair of dentures and a pressed suit who says oh so often ‘I care about you.’ In the last election, a bombastic showman played the media like a fiddle to steal the show, and in this election the media is stealing America back, so they can return it to the hands of its rightful owner, a hollow hooker with a good smile who will sell it to which ever foreign interest is willing to pay the highest price for the night.

What kind of father?  A father who was benefiting financially from the influence-pedaling scheme that used Hunter as a cut out, a deniable patsy.  We know Hunter has been under investigation for several years.  Will he ever be charged with or convicted of anything?  With Joe Biden in the presidency, that’s highly unlikely, because to convict Hunter, a very great deal of information about just how compromised Joe Biden is, to say nothing of the criminal complicity of the rest of the Biden family, would have to be revealed.  Even our almost entirely compromised media couldn’t suppress that kind of scandal.

But wouldn’t the self-imagined elite be happy to be rid of Joe, the quicker to ooze Kamala into the Oval Office, which has been their intention all along?  Not necessarily, particularly if a great many other members of that self-imagined elite are also implicated in a wide variety of anti-American crimes.  Of course, if D/S/Cs are successful in completely corrupting our Republic, none of that will matter.  They’ll be immune to arrest, untouchables.

Unfortunately, about half of America remains unable, unlike Alexander, to see reality, and to act on it to their benefit, and the benefit of all Americans.

Take the link, gentle readers, and see what we’ve wrought.  As you do, contemplate the assertion we get exactly the government we deserve.

11 thoughts on “The Bidens: The Government We Deserve”