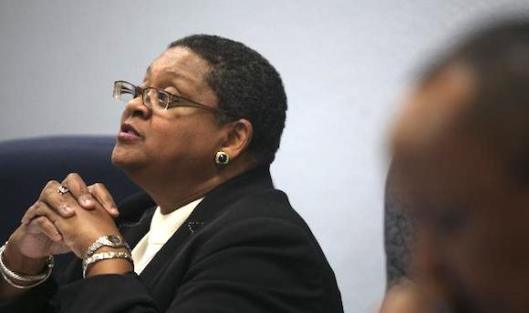 This is the second in a series I’m currently writing on race-based school discipline policies.  This article was originally posted in November of 2014.  In the third, and original, article, which I’ll post a week from today, you’ll see that there be method in my madness.  In the meantime, I think you’ll find this article interesting.

I have, since 2012, been writing on the Obamite determination to control education–and the minds of the young–by forcing schools to implement race-based discipline procedures. This is only one facet of a multi-level attack on education by the most corrupt President and Administration in history, just another attempt to “fundamentally transform” America.

The primary “logic” behind this movement is entirely statistics based. If Anytown High School has an 18% black student population, but black students represent 23% of those suspended for any reason, obviously, racism and injustice are involved, and Anytown High School must be forced to suspend no more black students than are represented by their numbers in the general school population. This is, of course, actually racist nonsense. Applied to the real world, it ignores culture, the realities of misbehavior and crime in individual communities and schools, and the reality that blacks, for example, commit crimes in numbers far out of proportion to their numbers in the American population. On the opposite side of the equation, Asians commit far fewer crimes than their numbers in the population would require by a statistics-only analysis. Ultimately, race-based disciplinary policies remove individual responsibility entirely from school discipline in favor of predetermined social justice outcomes.

This is aligned with the fundamental beliefs of Conservatives and Progressives. Conservatives believe in equality of opportunity and individual responsibility. Government should ensure that everyone has the same opportunity to succeed—or in this case—to avoid misbehavior/crime and expulsion from school. They believe that everyone, regardless of their race, must be responsible for their actions, and must face the same disciplinary processes and penalties for similar offenses.

Progressives, on the other hand, believe in equality of outcome and exalt the victim culture. Blacks, because some of their ancestors many generations removed may have been slaves, and because some of their ancestors, several generations removed, might have been discriminated against because of their race, must, to atone for these past wrongs, be immune to the consequences of their individual misbehavior or crimes. That they are subject to discipline for their misbehaviors and expelled when that misbehavior or criminality becomes so great it infringes on the educations of others, can be nothing other than evidence of pervasive, institutional racism.

On 08-30-12, I wrote an article for PJ Media titled “Next Up For Team Obama: Racial Quotas For School Discipline.” An excerpt that has proved to be prophetic:

Imagine the paperwork, data production, and the legal processes federal involvement in school discipline will cause. School principals requiring permission from federal lawyers and bureaucrats to discipline children is not outside the realm of possibility for an administration that sees government as the solution to every problem (and every non-problem).

No rational legislator would enact such foolishness, but Mr. Obama has made it plain that when Congress won’t act, he will. Expect just that, coming to our schools in 2013.

On August 19, 2013, I wrote an article at SMM titled “On Race and Statistics Based School Discipline.” That article linked to a an article at Powerline on that topic. An excerpt:

Yesterday (08-18-13) Paul Mirengoff of Powerline–a site you should have in your favorites if you don’t already–posted an article on the civil rights movement’s attempts to establish race and statistics based school discipline.

The basic idea is that schools should not be allowed to discipline students of color at any rate larger than their distribution in the school population.  So if a school has an 18% black population, but 37% of disciplinary infractions are committed by black kids, too bad; 19% of those infractions will just have to be ignored.

I wrote to Mr. Mirengoff, letting him know about my August 30, 2012 PJ Media article on the same topic, focusing, however, on the Obama Administration’s efforts on the same lines, including the ability of the Holder DOJ–and others–to sue schools for alleged violations.  Mr. Mirengoff was kind enough to link to my article in an update to his original post.

Finally, on March 24, 2014 I posted a SMM article titled “Race-Based School Discipline: The Movement Continues.”  That article linked to several excellent articles, including several by the invaluable Heather McDonald regarding the realities of race, particularly blacks, and the crimes they commit vs what a surface examination of statistics might suggest. An excerpt:

This, gentle readers, is just one more facet of hope and change promised by Mr. Obama and delivered by his racialist and racist minions in the Departments of Justice, Labor, Education and elsewhere. If a Republican wins the White House, they’ll need eight years merely to neutralize the most destructive detritus left behind by Barack Obama.  If a Democrat wins…the destruction may become so complete there is nothing to save.

If you’re interested in this topic—and for the sake of America’s future, I hope you are—by all means, take the links and read those earlier articles.

The bad: The district has pledged to do this by implementing a special review system for cases where a black or Latino student is disciplined. Only minority students will enjoy this special privilege.

That seems purposefully unconstitutional—and is likely illegal, according to certain legal minds.

Why would any major metropolitan school district do that? Beside the fact that Minnesota is a hopelessly Progressive dominated state?

The new policy is the result of negotiations between MPS and the Department of Education’s Office for Civil Rights. Minority students are disciplined at much higher rates than white students, and for two years the federal government has investigated whether that statistic was the result of institutional racism.

Superintendent Bernadeia Johnson has been working to decrease suspensions district-wide. She has encouraged other forms of mediation to take precedence in cases where a student’s behavior is merely inappropriate, rather than violent. That’s all well and good; public schools have gone discipline-crazy over the years, punishing students all-too-harshly for silly reasons every day. Any respite from overcriminalization is welcome.

Soave engages in a bit of hypebole here. While we do indeed hear of the occasional disciplinary outrage—I often report and comment upon them on this scruffy little blog—most disciplinary matters, including suspensions, are the routine, unremarkable consequences of obvious and easily quantified student misbehavior. Any racial component has to do with the fact that some cultures are more likely to misbehave and commit crimes than others, not with any discrimination against those cultures. Soave continues:

Any respite, except this one:

‘Moving forward, every suspension of a black or brown student will be reviewed by the superintendent’s leadership team. The school district aims to more deeply understand the circumstances of suspensions with the goal of providing greater supports to the school, student or family in need. This team could choose to bring in additional resources for the student, family and school.’

That comes directly from Johnson’s desk. I suppose it’s well-intentioned—but don’t all students, regardless of skin color, deserve to have their disciplinary issues adjudicated under the same standards? And yet Johnson is committed to reducing suspensions for minority students by a specific percentage, irrespective of the facts of the individual cases:

Quite so. But this is a problem for progressives because it would tend to ensure equality of opportunity rather than equality of outcome.

So the MPS have established arbitrary goals, goals based on unicorns and fairy flatulence. And what if student (mis)behavior fails to conform with these arbitrary goals? That’s the point, gentle readers: reality will be warped to conform to these fantasy goals, consequences, student and student safety, and learning, and the law be damned.

And what about the law? Isn’t applying different standards and procedures to the misbehavior of students based on their skin color prima facie unequal? Doesn’t it deny students equal protection under the law? Why, so it does:

Hans Bader, a senior attorney at the Competitive Enterprise Institute and former Office for Civil Rights lawyer, tells me that this disciplinary quota system violates 7th Circuit Court precedent established in a 1997 case, People Who Care v. Rockford Board of Education. In that decision, the court determined that it was unconstitutional for a school to mandate that black students be disciplined at identical rates as white students. That policy was discriminatory on its face, since it would result in children receiving different punishments depending on their race.

Contemporary school discipline policies are the result of a centuries-old process and clear and unambiguous law. Circa 2014, America is a remarkably classless, color-blind nation, a veritable light to the nations. Actual racists—not those accused by race-card playing twerps—are, justly, social pariahs.

A common school discipline policy works very simply. At the lowest level, teachers hand out extra work, or perhaps a brief after school detention. After students have exhausted the effectiveness of these minor disciplinary consequences, they are normally referred to a principal who imposes more or longer detentions. If they continue to get into trouble, they may be assigned a day in on-campus suspension (OCS). Further misbehavior will lead to multiple days in OCS. If misbehavior continues, they will commonly be assigned to a short term in off-campus suspension. Should a student misbehave there, or after returning, continue to misbehave, a longer term in off-campus suspension is normally assigned. Should they continue to misbehave, suspension is the only additional punishment.

Of course, if an offense is suitably serious, such as an assault, drug use or dealing, violating a significant criminal law, or assaulting a teacher, a student will normally be immediately suspended, and in many cases, criminally prosecuted.  In every case, expulsions are afforded full due process protections, and students may appeal their suspensions to the school board.

The reality is that any misbehaving student normally has multiple opportunities over many weeks, even months, to correct their behavior. The process always involves many direct contacts between parents and teachers and principals, and usually, a variety of parent/school staff, face-to-face meetings. Students actually suspended have been afforded all the due process required by law, and many opportunities to avoid further discipline. Race is simply not a component.

Oh, but some principals and teachers are racist. Uncommon, but possible. Should that be the case, it would be easy to detect and easier to correct. That’s not the issue.

Are the Minneapolis Public Schools admitting their disciplinary policies are inherently racist? It would seem so. But if they are not, how will the MPS reduce this supposed “disproportionality” by 100%? Unless the MPS staff are irredeemable racists, discipline has been administered only to students who manifestly earned it. How, exactly, will the MPS cause problem students to reduce their misbehavior and criminality thereby reducing the disproportion? There seems to be no mention of this factor.

What will be reduced instead are numbers, numbers on paper. The data will be whipped into submission until it crouches and cringes appropriately. Misbehavior and criminality will continue to occur, and will almost certainly increase because Black and Hispanic students will learn, long before 2018, that because the people running the schools are fools, they are invulnerable. As for the rest of the kids unfortunate enough to live and attend school in Minneapolis, and their teeachers, good luck. You’re going to need it.

Yet another example of hope and change, brought to Minneapolis–and coming to a school district near you in the next two years–in the name of the fundamental transformation of America.