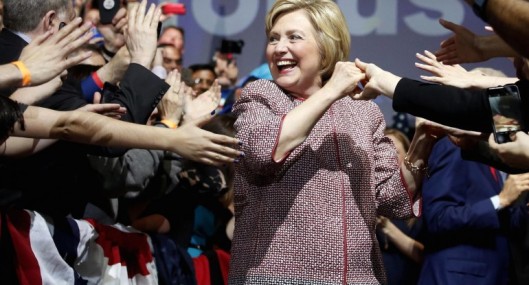 During his white-suited standup days, Steve Martin did a bit about buying a $300 dollar pair of socks. It was funny–absurd really–because who in their right mind would pay that much for a pair of socks? Martin played it masterfully, acting like a dim-witted, self-important twit. Who would really do something like that? Hillary Clinton would; Hillary Clinton who campaigned in a $12,000 dollar jacket. Hillary Clinton, the women who was so poor when she left the White House she had to steal the furnishings. Hillary Clinton, the woman that is just like us and is going to fight, fight, fight for us, the middle class!

In composing this brief article about Hillary Clinton, I immediately realized I could easily write ten thousand words and not come close to touching on her major scandals, lies and violations of the law, to say nothing of her innumerable minor outrages. Never in my living memory has any political party put forward a more dishonest, dishonorable, corrupt and criminal candidate for national office. I’ll have much more to say in the near future, but for now…

With the release of the Benghazi report we know Hillary lied about the attack. She lied to the public even as she was telling her daughter and Egyptian authorities the truth: it was a planned terrorist attack. When the caskets of our honored dead returned to America, Clinton, over the bodies of the dead, lied to the survivors, and later called them liars for daring to tell the truth about her lies. 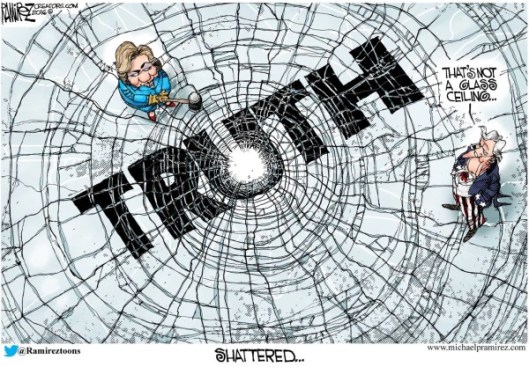 But we learned a number of new and equally dishonorable things, things that alone should convince any rational American that Hillary Clinton should never again be allowed to hold any position of authority or responsibility in our government. I’ll mention only one.

We now know the night of the Benghazi attack, she presided over a teleconference of several hours. Apparently by that time, President Obama and the Defense Secretary Leon Panetta had given the authorization for mobilizing our military rescue forces. Remember, please, gentle readers, that Clinton ignored hundreds of actual requests–pleas, really–from Ambassador Chris Stevens and others for enhanced security assets in Benghazi.

Our military assets weren’t sent. A Marine FAST team in Rota, Spain was forced to sit and wait. At one point, Clinton and her dithering nitwits were trying to decide whether the Marines would be sent unarmed. The Secretary of State of the United States of America, the woman who claimed Americans wanted her answering that 3:00 AM phone call, was actually intending to send Marines on a rescue mission, into a failed state–a state she caused to be a failed state— a war zone where we knew hostiles were trying to kill Americans, unarmed. No less than four times, the Marines had to change in and out of civilian clothing and uniforms because Clinton couldn’t decide what they should wear as she worried about offending the virtually non-existent Libyan government, a government she destroyed.

Ultimately, it was an ad-hoc convoy of former Libyan military that rescued our remaining personnel and allowed them to evacuate, but not before Hillary Clinton’s carelessness, inattention and dithering caused the loss of four American lives.

Marines changing back and forth–four times–from civvies to uniforms. That’s insane. That’s criminal. Americans are dying, and Hillary Clinton is obsessed with appearances. Surely this is unprecedented.

Consider this from Dereliction of Duty, by Lt. Col. (USAF ret.) Robert “Buzz” Patterson (Regnery, Washington. 2003). Patterson was the Air Force officer that carried the nuclear “football” in the Clinton White House. He carried the means by which the president could launch a nuclear strike. Bill Clinton once lost the card with his nuclear launch codes and didn’t tell anyone. It was never found, but that’s another story.

Early in the administration the ‘buzz” was that Chelsea had refused to ride to school with her military driver and that Hillary had banned military uniforms in the White House. The president eventually called the uniform ban ‘an abject lie,’ once it because apparent that this story didn’t play well politically. I can’t speak on whether Chelsea refused military drivers, but I do know the uniform issue with Mrs. Clinton was real. Soon after I arrived in the White House, my predecessor briefed me that Mrs. Clinton didn’t want the military aides in uniform. The White House Military Office argued that, for the safety of the president, it was critical that the Secret Service and staff be able immediately to identify the military aide. Common sense and security finally prevailed–at least at official functions with the president. At all other times, however, we were expected to be in business suites or civilian clothes in order to downplay the military presence at the White House.

Patterson’s book is full of examples of Mrs. Clinton’s hatred for and abusively vile behavior toward White House military staff. It would appear her disrespect for those that serve our nation has very deep roots indeed.

And now we come to Hillary’s absolution. There was, of course, no way that the Obama Administration would allow the Democrat’s presumptive nominee to be indicted. It would be difficult to imagine any crime that could possibly have provoked an indictment. Bill Clinton’s in-your-face meeting with Attorney General Loretta Lynch was nothing more than a last minute sneer, a spit in the face of the collective American public. I’m sure Ms. Lynch will be happy to accept the recommendation of FBI Director Comey, the supposed straight shooter, who twisted himself into a legalistic pretzel explaining in detail how Hillary Clinton–and her minions–violated federal law hundreds, if not thousands, of times. He explained that she exposed national security secrets to our enemies. And then he bizarrely claimed that no prosecutor would file charges.

There is no way of getting around this: According to Director James Comey (disclosure: a former colleague and longtime friend of mine), Hillary Clinton checked every box required for a felony violation of Section 793(f) of the federal penal code (Title 18): With lawful access to highly classified information she acted with gross negligence in removing and causing it to be removed it from its proper place of custody, and she transmitted it and caused it to be transmitted to others not authorized to have it, in patent violation of her trust. Director Comey even conceded that former Secretary Clinton was ‘extremely careless’ and strongly suggested that her recklessness very likely led to communications (her own and those she corresponded with) being intercepted by foreign intelligence services.

The statute McCarthy cites requires no intent. It was written to deter anyone, for any reason, from carelessly handling our nation’s secrets. It is the exposure of our vital secrets, secrets that can and do cost lives, that is illegal, not whether anyone intended to do bad things. Countless people have been prosecuted for doing far, far less than Clinton.

In essence, in order to give Mrs. Clinton a pass, the FBI rewrote the statute, inserting an intent element that Congress did not require. The added intent element, moreover, makes no sense: The point of having a statute that criminalizes gross negligence is to underscore that government officials have a special obligation to safeguard national defense secrets; when they fail to carry out that obligation due to gross negligence, they are guilty of serious wrongdoing. The lack of intent to harm our country is irrelevant. People never intend the bad things that happen due to gross negligence.

I would point out, moreover, that there are other statutes that criminalize unlawfully removing and transmitting highly classified information with intent to harm the United States. Being not guilty (and, indeed, not even accused) of Offense B does not absolve a person of guilt on Offense A, which she has committed.

To make it as plain as possible, Hillary Clinton broke the law. She did it hundreds of times. FBI Director Comey revealed that even as Clinton lied, claiming nothing she sent was ever marked classified, more than 100 separate e-mails were, in fact, marked classified when she sent them, or caused them to be sent over unsecured channels. She committed hundreds, even thousands of felonies in the process of opening up our national security secrets to our worst enemies. She is, at best, a dangerous fool, and at worst, a traitorous criminal.

Hillary Clinton has not been absolved of guilt. God only knows what material our enemies have with which to blackmail her. All Director Comey did, apart from throwing away any pretense of honor and honesty, was give Loretta Lynch an out on prosecution.

But FBI agents will leak the truth! There will be outrage! Oh, some people will be outraged, but not Democrats. They expect their politicians to be corrupt, criminal and traitorous. For them, it’s a feature, not a bug. It’s a job qualification, not a disqualification. Unless their politicians are crooked, they’re not going to get in on the graft. It is no coincidence Comey’s false and clumsy absolution occurred on the very day on which Barack Obama began using Air Force One as a campaign plane for Hillary.

Every semi-honest federal employee knows the score. If they want to keep paying the mortgage, if they want to one day have a pension, they’ll shut up and let the rule of law be ignored and battered. After all, they’ve had so much practice doing that during the Age of Obama, they’re numb. They barely recognize the difference between law and lawlessness anymore. They know just how corrupt and vindictive is the federal bureaucracy under Barack Obama.

And even if, miracle of miracles, Hillary were prosecuted, Obama would have pardoned her. As I’ve been predicting for years now, the blizzard of pardons we’re going to see on his way out the door will make Bill Clinton’s lawless pardons look like jaywalking violations.

Some will say that the rule of law died on July 5, 2016. No. It’s not quite dead. Until individual Americans no longer see any reason to obey the law, any law, it’s only mostly dead. We’re not there yet.

But if we elect Hillary Clinton, we’ll be able to see it from there.

20 thoughts on “Hillary Clinton: You’ll Be Able To See It From There”