How many illegal aliens have Biden’s handlers allowed into the country since January? About a million:

The inflow of roughly 1 million job-seeking, wage-cutting migrants was hidden under a record-breaking total of 1.7 million official ‘encounters’ with migrants at the border, according to the Post‘s article, ‘Historic data shows fiscal year 2021’s figure was the highest total ever recorded.’

Golly.  Could that be mere incompetence, or is it—I dunno—on purpose?  And if that’s not bad enough:

The inflow is in addition to the Biden administration’s choice to revive legal immigration — roughly 1 million per year — and the inflow of foreign temporary workers holding H-1B and other work permits. All told, Biden’s deputies likely imported 2 million foreigners into the United States, even as tens of millions of Americans are struggling to find good jobs, pay for homes or rent, and to persuade politicians to vote in their pocketbook interests.

Normal Americans embrace a number of sad misconceptions.  Among them is the laughable idea it is the job of the President of the United States, and the entire government, to protect the American people and to look out for their interests—“America First” as Donald Trump used to say.  Amazingly, they believe Presidents, and all government officials, ought to obey the law!  They also think, and this is particularly funny, Presidents shouldn’t lie to them!  And so Gropin’ Joe Biden promised, as expressed by his spokesliar, Red Jen Psaki on 01-20-21:

‘But we have a common goal, which is sharing accurate information with the American people.’

Biden plans to ‘bring transparency and truth back to the government to share the truth, even when it’s hard to hear,’ she said.

Uh-huh.  Here’s some of that transparency, courtesy of the invaluable Miranda Devine at The New York Post:

Planeloads of underage migrants are being flown secretly into suburban New York in an effort by President Biden’s administration to quietly resettle them across the region, The Post has learned.

The charter flights originate in Texas, where the ongoing border crisis has overwhelmed local immigration officials, and have been underway since at least August, according to sources familiar with the matter.

Last week, The Post saw two planes land at the Westchester County Airport, where most of the passengers who got off appeared to be children and teens, with a small portion appearing to be men in their 20s. 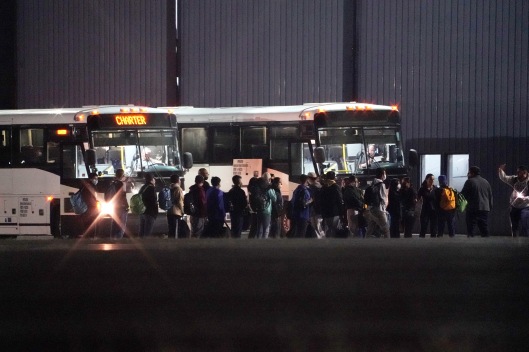 Westchester County cops stood by as the passengers — whose flights arrived at 10:49 p.m. Wednesday and 9:52 p.m. Friday — got off and piled into buses.

Some of them were later seen meeting up with relatives or sponsors in New Jersey, or being dropped off at a residential facility on Long Island.

A Post analysis of online flight-tracking data suggests that around 2,000 migrants nabbed after sneaking into the US from Mexico have arrived at the airport outside White Plains on 21 flights since Aug. 8.

Notice the late arrival times, and some early times, all of which have the advantage of being in the dark:

The clandestine nature of the operation raises questions about how the White House is dealing with a recent surge in unaccompanied minors.

The most recent figures from US Customs and Border Protection show that just during July and August, 37,805 unaccompanied minors were caught entering the US from Mexico — sometimes after being abandoned  by professional  smugglers known as ‘coyotes.’

Video shows some children dropped over the border wall or abandoned in remote areas.

And where do these children—illegal immigrants one and all—go when they get off their clandestine, chartered, taxpayer-funded flights?

A source familiar with the operation at the Westchester airport said the underage migrants typically arrive carrying backpacks and are bused to locations including the Bronx, Brooklyn, Queens, upstate Newburgh, and Bridgeport and Danbury in Connecticut.

Around 12:30 a.m. Saturday, it stopped in Syosset, Long Island, at the campus of MercyFirst, a nonprofit sponsored by the Catholic Sisters of Mercy that provides housing and services for ‘children and adolescents who are the victims of societal problems,’ according to its website.

How precious.  The Catholic Church is helping the Harris/Biden/Whoever Administration—Joe Biden, Temporary President—break multiple federal laws, which is probably a “societal problem.”  As usual, Ron DeSantis is asking pertinent questions:

Republican Florida Gov. Ron DeSantis expressed outrage at The Post’s findings, with a spokeswoman saying: ‘If the Biden Administration is so confident that their open-border policy is good for our country, why the secrecy?’

Good question.  So is this:

‘Why is the Biden Administration refusing to share even the most basic information about illegal alien resettlement in communities throughout our state and the entire country?’ spokeswoman Christina Pushaw said.

‘Washington, DC, sets immigration policies that do not affect them, and states — that lack information about migrant resettlement and do not have the authority to change federal immigration policy — are expected to bear the brunt of Biden’s reckless open-borders agenda.’ 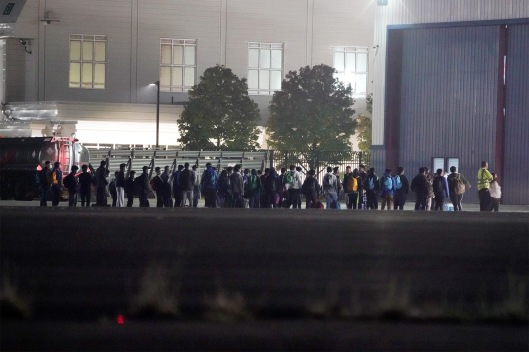 Take the link to read the rest of the article, where you’ll find local residents near the airports reporting very low flying jets, mostly landing very early in the morning, frequently arriving.  They also report most of the lights that are normally on throughout the night at such airports—for some reason airports tend to be very well lit–are mostly extinguished when the jets arrive.  Of course, this is standard operating procedure for airports interested in maximum transparency.

The White House insisted Monday that the flights only carry children and teens, and the US Department of Health and Human Services said, ‘It is our legal responsibility to safely care for unaccompanied children until they can be swiftly unified with a parent or a vetted sponsor.’

No, it is your legal responsibility not to allow people to enter or remain illegally in America. Consider this from a NY Post editorial:

There’s a reason the Biden administration is using secret flights to small airports to move unaccompanied minors who illegally crossed the border.

They don’t want voters to know just how many people are being waved right into the country, because President Biden understands that open borders might be the policy of progressives, but it’s not popular among the majority of Americans.

But you know who does realize these flights are happening? The people of Central and South America. Word travels fast that no one is getting deported, and that’s why they are paying money to smugglers to take their children on a perilous journey north.

That’s why there are so many heartbreaking images of toddlers literally being dropped over the wall, abandoned in the wilderness.

There were a staggering 18,958 encounters between the Border Patrol and unaccompanied children in July. In August, the figure was 18,847.

That’s up 655.6 percent from the previous year.

Nothing to see here, particularly since you don’t know anything about it.  Move along.  Move along.  Fortunately, just as Red Jen Psaki—and I’m not referring to the color of her badly dyed hair—was just as transparent on this issue as she was about Biden’s transparency: 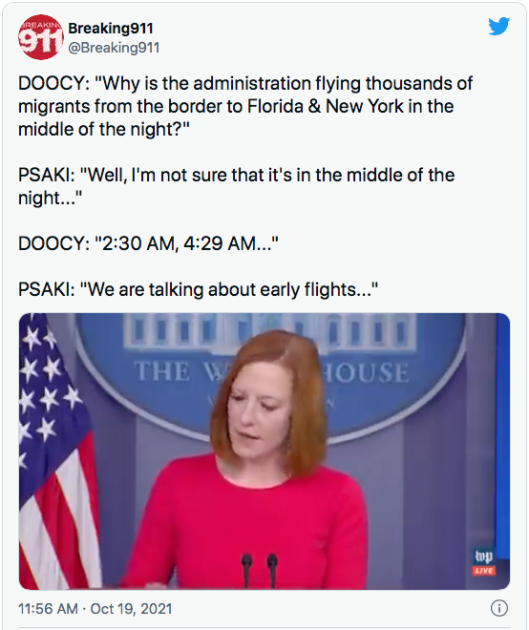 White House press secretary Jen Psaki claimed that unaccompanied illegal immigrant children being flown from the southern border to suburban New York at 2:30 a.m. were not being flown ‘in the middle of the night.’

‘Why is the administration flying thousands of migrants from the border to Florida & New York in the middle of the night?’ Fox News’ Peter Doocy asked Psaki on Tuesday.

‘Well, I’m not sure that it’s in the middle of the night,’ Psaki responded, before being cut off by Doocy who read the flight times aloud.

‘2:30 a.m., 4:29 a.m.,’ Doocy said before Psaki interrupted him saying, ‘Here we are talking about early flights, earlier than you might like to take a flight.’

Final Thoughts:  These numbers, gentle readers, are not official numbers, they’re only what actual journalists, and honest Americans leaking what they can, have been able to discover.  Even those represent only the kids we’ve actually caught and detained.  They do not represent those sex trafficked, those raped and murdered on the long trip to our southern border, those who managed to simply walk across the border in the hundreds of miles where our Border Patrol is not allowed to be, or those pressed into service as mules for drug cartels, who, with Joe Biden’s help, are actually in charge of our southern border.

Why are the Bidenites flying them across the country and why the secrecy?  There are many reasons, but among them are avoiding very bad optics, not only from the grotesquely overcrowded border holding facilities they have taken such pains to hide, but from the public seeing them being flown and bussed all over the country.  These are also—D/S/Cs expect—future D/S/C voters, and it’s better to get them while they’re young, give them free college indoctrination, the better to ensure they grow up to be proper Marxists.  Actually, they’ll be voting immediately.  But they’re not old enough!  That doesn’t stop the dead from voting, why should it stop children who can’t speak, read or write English?

Keep in mind Bidenites have grudgingly admitted the Covid positivity rate among illegals in their holding facilities is around 25%, which means it’s many times higher.  None of these people are being vaccinated—if they were, we would be seeing video of that happy fact many times a day—yet they’re being flown all around the nation.  China couldn’t have spread a contagion more effectively.  Actually, perhaps they are.  But hey, this is all about public health, you know, as Joe said, we’re protecting the vaccinated from the unvaccinated—by secretly distributing them throughout the nation without the knowledge of the vaccinated, who though vaccinated, are somehow in danger from people who aren’t.  I’m sure Biden would explain: 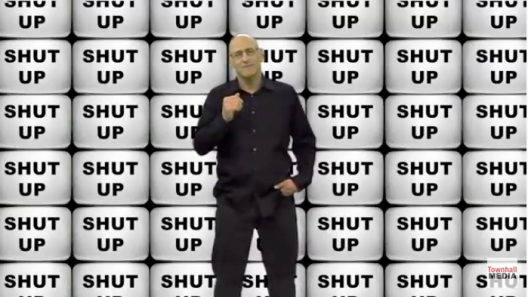 And who are these parents or vetted sponsors?  It’s a sure bet these “parents” are largely Covid positive and themselves illegal, if they’re actually the children’s parents at all.  We’ve certainly seen enough of adults using kids in that way, and Bidenites more than happy to allow them to be used.  The “vetted sponsors,” are surely at least as well vetted as the Afghans we continue to import—not at all–and the NGOs involved are just as surely Leftist D/S/C allies, more than happy to help Bidenites violate federal law for political gain.  Even if a child were actually reunited with its parent, they’ll all vanish somewhere in America, which is just what the Government wants.

This, gentle readers, is transparency.  Oh, and it’s also unity.