Sin.  It is our lot in life.  Unless we are sociopathic, hopelessly narcissistic, both or worse, it bedevils us.  We cannot escape it because we are fallen.  It is our nature.  We can never entirely eliminate it.  Fortunately, that’s not necessary for salvation, which awaits us because we can be forgiven.  By accepting God, by humbling ourselves before our maker and savior, and by doing what he asks–love him with all our minds and hearts and souls, and love our neighbors as ourselves–we may have eternal life after this all too brief period of trial and testing.

But that isn’t easy.  Many sins are satisfying, immensely pleasurable.  They feed our egos, harm our enemies and provide mortal, material comforts.  Yet, if we have a conscience, and thank God, most do, they leave us anxious, hurting and empty in a way no human relationship can fill. We need the strength of One greater than ourselves, greater than anything, to help us avoid them, to help us love more fully, to get our minds off ourselves and this world, and looking toward the next.  The harder we work against sin, against the worst angels of our nature, the better for us, and for everyone.

Certainly, there is more to faith.  The fellowship of believers strengthens us and helps us live as God would have us live. It makes life more joyous and satisfying.  It gives us opportunities to broaden our faith with deeds, to help those in need, and to the extent of our limited abilities, to serve as examples for others. And then there is Joshua Harris, as Fox News reports:

Author Joshua Harris, after announcing the end of his marriage, is now kissing his faithgoodbye.

Harris, the author of the best-seller ‘I Kissed Dating Goodbye,’ a book he authored in 1997 that he later renounced after shaping purity culture for many millennial believers, revealed that he is stepping back from his faith. In an Instagram post, he also apologized for his previously held views, including “bigotry” to the LGBTQ community.

‘The information that was left out of our announcement is that I have undergone a massive shift in regard to my faith in Jesus,’ Harris wrote.

‘By all the measurements that I have for defining a Christian,’ he added, ‘I am not a Christian.’

Prior to reading this Fox article, I had never heard of Harris.  While ministers hold a necessary place in the furtherance of faith, I’ve never thought any of them saints.  Many fall, and some, like Billy Graham, live exemplary lives, but why would their personal travails be of interest?  Why would Harris make such a public pronouncement?  Why would he disown what appears to be the very substance of his ministry and belief?

The former mega-church pastor apologized for:

my self-righteousness, my fear-based approach to life, the teaching of my books, my views of women in the church, and my approach to parenting to name a few.’

He particularly apologized to the LGBQTWERTY “community”:

‘I want to say that I am sorry for the views that I taught in my books and as a pastor regarding sexuality. I regret standing against marriage equality, for not affirming you and your place in the church, and for any ways that my writing and speaking contributed to a culture of exclusion and bigotry,’ Harris wrote. ‘I hope you can forgive me.⁣’

His divorce is sad, perhaps a tragedy, yet his glaringly public announcement of that, and his renunciation of his faith, are more so.  Is he unaware his public self-flogging is harmful to the faith of others, particularly those who thought he spoke God’s words?  All those years, was he knowingly a false prophet, leading the faithful astray?

The church he led for some 11 years has also responded to Harris:

Harris served as senior pastor at Covenant Life Church in Gaithersburg, Maryland, from 2004 to 2015. And in a letter to the Covenant Church family, Interim Senior Pastor Kevin Rogers wrote about Harris’ announcement: ‘These updates are hard to hear. We love Josh and Shannon. For most of us, Josh isn’t just some distant public figure. He’s a beloved former pastor and friend. So this news isn’t just a lot to process theoretically. It hits home personally.’ 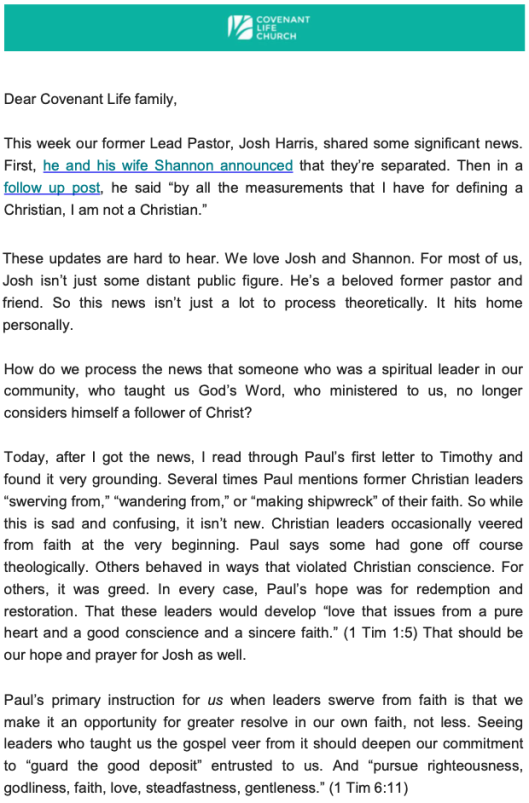 We judge not the faith of others, yet Harris has opened himself to judgment by going public.  He has opened the door, a door silence protecting his family and others would have kept closed.  His statements raise obvious questions: Is he divorcing because he is Gay?  For how long? If so, one might think him at least a little honorable, but only if he is turning his back on God because he recognizes homosexuality as sin and thinks himself a hypocrite.  If so, what a choice: the pleasures of the world taking precedence over eternal life, over his relationship with Christ.  Did he, like Jimmy Swaggart, preach most fiercely against his own secret sins?

Obviously, this is speculation, but perhaps not unwarranted speculation.  Is Harris truly concerned for the believers he led and influenced, or more interested in solidifying his position in a different body of believers?  Does he seek the acclaim of fallen men, or God?  How much better to keep one’s personal tragedy private, particularly when one has three children?  Whose welfare does Harris seek?

One irony in this is that “Joshua” means “the Lord saves”  (alternately “He saves”).   But the greatest irony is Harris seems to be most concerned with the forgiveness of the LGBTQWERTY community.  He–we all–must seek it elsewhere, from the One capable of giving it, from the One whose forgiveness truly matters.