In November of 2013, I wrote: The Company Of Enemies: Dick Metcalf and Guns & Ammo.   Metcalf, a long time writer for Guns & Ammo took a strident position that AR-15s and similar firearms were not protected by the Second Amendment.  His position was that fine wood and blued metal hunting guns were protected, but not those nasty, black semiautomatics and the non-elite who like them.  Public reaction was, to put it mildly, swift and equally strident, and he–and the editor that approved his article–was fired.  He eventually, grudgingly, apologized to no effect, and for some time thereafter, embraced the enemies of liberty, who joined him in crying CENSORSHIP!

In one of two follow up articles, I explained why Metcalf (enter “Dick Metcalf” in the SMM home page search bar to find everything I wrote on the topic), and his anti-liberty supporters, were wrong:

Let’s keep in mind that this is not a First Amendment issue.  No one has a right to write for any publication, and censorship is not involved.  Metcalf was not fired to prevent him from expressing his opinion; he has done that in a variety of publications, including the NYT, since leaving Guns & Ammo.  His problem was stepping outside the boundaries of content his employer–and his readers–expected, and doing it in a way that called into question the gains in liberty decades of hard work have secured.

I explained in more detail the issue was fundamentally economic:

Guns & Ammo’s business model has been successful for decades precisely because it well understands and serves its audience.  This is how free enterprise in the publishing industry works.  There are many publications that feature debate on consequential social and cultural issues.  Guns & Ammo is not one of them.  No one reads the magazine hoping to find persuasive argument for gun bans or watering down or repealing the Second Amendment.

This is not an issue of a ‘nervous’ editorial board unable to brook dissenting opinions.  They have no obligation to publish such opinions—it is generally counter to their editorial stance, the expectations of their audience, and profitability—and when they apparently forgot that there are consequences to betraying the expectations of their audience, an audience that cares very much about these issues and is extraordinarily well informed about them, that audience quickly reminded them.

Regular readers, among the most astute consumers of news and commentary extant, know well what “get woke, go broke,” means.  It happened to ESPN, the sports network, as this article from June of 2018 suggests:

On March 14, incoming ESPN president Jimmy Pitaro — then still Los Angeles-based — made a trip to the network’s Bristol, Connecticut, headquarters for a town hall with employees.

Pitaro, 48, is a digital-native executive with strong ties to Disney CEO Bob Iger. He assumed stewardship over a company rocked months earlier by the head- spinning departure of John Skipper, the victim of a blackmail scheme by a cocaine dealer. At the same time, the 8,000-employee sports behemoth was being buffeted by political controversies (including widespread NFL anthem protests) that exacerbated its relationship with arguably the most powerful league in sports.

So Pitaro’s mandate was to calm the waters. When he was asked by staff about charges of a liberal bias at ESPN, he pushed back. The company, he told employees, is not ‘a political organization. Of course there will be an intersection between sports and politics. We will cover that fairly. But we are focused on serving the sports fan.

That’s precisely what put Pitaro in charge of ESPN.  The adults in charge of profit, after several years of increasingly insane leftist commentary replacing sports coverage, could no longer ignore the fact ESPN was going broke.  Even self-righteous Leftistm, it seems, has limits where money is involved.  Pitaro still has his work cut out for him as Fox News reports: 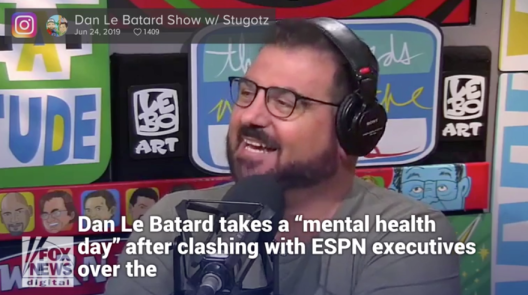 Dan Le Batard skipped his radio program on Monday following a weekend of trying to persuade ESPN President Jimmy Pitaro to soften his rule that politics should be avoided on the sports network following last week’s anti-Trump outburst by the outspoken host.

ESPN honchos reminded staffers last week that on-air talent should avoid stories considered ‘pure politics’ after Le Batard slammed President Trump along with his ‘cowardly’ ESPN for not allowing employees to speak out. 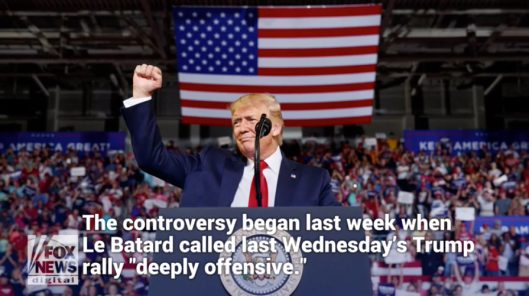 In his monologue during the broadcast of the ‘Dan Le Batard Show’ on Thursday, Le Batard derided the company’s policy and openly acknowledged the network’s resistance from talking about controversial topics tied to politics, noting ESPN ‘doesn’t have the stomach’ to address Trump or ‘dangerous rhetoric.’

‘We don’t talk about what is happening unless there is some sort of weak, cowardly sports angle that we can run it through,’ Le Batard said. ‘This isn’t about politics; it’s about race.

Pitaro stood his ground despite Le Batard’s efforts to get permission to talk politics going forward. Once Le Batard was told to knock off the political rhetoric, he told ESPN that he wasn’t mentally prepared to host his radio program, ‘The Dan Le Batard Show with Stugotz,’ on Monday, according to a source close to the situation. [skip]

The controversy began last week when Le Batard, whose parents are exiles from Cuba, called last Wednesday’s Trump rally ‘deeply offensive’ because the crowd targeted Rep. Ilhan Omar, D-Minn, with chants of ‘send her back.’ He also blasted ESPN for not allowing its broadcasters to criticize the situation.

ESPN allows its personalities to discuss politics when they cross with sports, such as players skipping White House visits and athletes kneeling during the national anthem.

Employees, including Le Batard, were notified that the policy hasn’t changed and strictly political stories don’t have a place at the iconic sports network under current leadership. 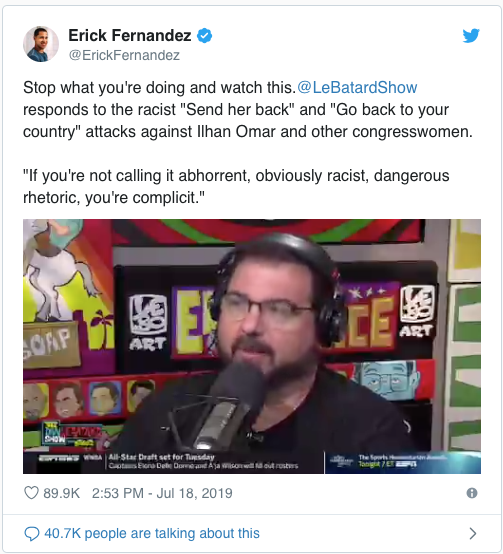 As one can see from the Erick Fernandez tweet, Le Batard has substantial support from the Left , because TRUMP! and RACIIIIIIIST!  but this is not a First Amendment issue.

Le Batard is working for a sports network, a network whose turn to the left under a Leftist boss who was fired, because his emphasis on Leftist propaganda sent ESPN into a downward spiral of unprofitability.  That his cocaine dealer was reportedly trying to publicly extort him probably made the decision to fire him a bit easier.  Simply put, people watch ESPN for sports, not Leftist political commentary and spittle flinging racist outrage. There are plenty of outlets for that, video, print and otherwise.  USA Today continues:

When Pitaro became ESPN’s president in May of 2018, he said publicly: ‘Without question our data tells us our fans do not want us to cover politics. My job is to provide clarity. I really believe that some of our talent was confused on what was expected of them. If you fast-forward to today, I don’t believe they are confused.’

Former ‘SportsCenter anchor and ESPN writer Jemele Hill left the company in September 2018 after she helped spark a redefined no-politics policy a year earlier by calling Trump a ‘white supremacist’ and suffering backlash and the Trump administration calling for her firing.

Anyone unfamiliar with Ms. Hill can read between the lines and realize she’s Black, and a goodly portion of ESPN’s Leftism was tinged with hatred for their white audience and for normal Americans, who ESPN personalities like Hill did not hesitate to call racist.  Insulting and driving away much of one’s audience is not a winning business practice, hence Pitaro.

As with Dick Metcalf, Le Batard may find himself seeking other employment.  He, and all ESPN on-air “talent” were told, quite clearly they were working for a sports network, not MSNBC.  Le Batard apparently decided because he is of Cuban extraction, and because TRUMP! he does not have to listen to his employer.  He can do as he pleases because he, and his message, are far more important than the profits of the company that employs him for a very specific, and obviously well defined, purpose.

Le Batard does not have a First Amendment right to a job at ESPN or any other media outlet.  By demanding he remain within the parameters of his job, ESPN is not in any way censoring him.  If he likes, he can expound on his political opinions in any number of ways.  Perhaps he can get a job with MSNBC?  Like Metcalf, he’ll be lauded as a hero of the left, and for a time at least, Leftist media outlets will shower him with airtime, column inches, and praise for his bravery.  As all Americans know, there is no bravery quite like that of people attacking normal Americans.  If he’s fired, he’ll become an instant social justice martyr.

ESPN has every right to tell Le Batard, and anyone they hire what is expected of them, because they’re in business to make money.  If an employee not only refuses to do that, but knowingly acts against the company’s interests, they can’t expect a friendly attaboy.  It should also be noted that an on-air personality who purposely fails to be on-air, has committed a cardinal sin, a genuine and well known firing offense.

The Walt Disney Company owns some 80% of ESPN, and Disney and Pitaro have an obligation to Disney stockholders to maximize their investment.  Political posturing instead of sports coverage isn’t doing that.  For the time being, Disney management and Pitaro appear to be the adults in the room.  Le Batard, not so much.

What’s happening is particularly ironic.  Just as Mr. Trump spoke a watered down version of a very common American sentiment about people who not only fail to recognize their blessings, but spit on them–“if you don’t like it, leave and don’t let the screen door whack you on the ass on your way out”–Pitaro will surely be telling Le Batard precisely the same thing.  I suspect he’ll be more specific than President Trump.

Le Batard, who is no doubt very well paid, will surely cry racism.  That’s what Leftists do when they don’t get their way and can’t support their positions.  But he has no one to blame but himself.  ESPN wants a sports commentator.  Le Batard has decided he’s a racialist propagandist and demands ESPN provide him a platform because TRUMP! and RACISM!

I’ve never seen or heard Le Batard. I never heard his name until he exposed his Leftist behind to America. But even that is not the issue. I’d be making the same points if Le Batard were spouting Conservative philosophy.  But should he lose his ESPN job, I’ll not shed a tear, and the Constitution will remain uninvolved.

3 thoughts on “ESPN And Dan Le Batard: Constitution Not Involved”