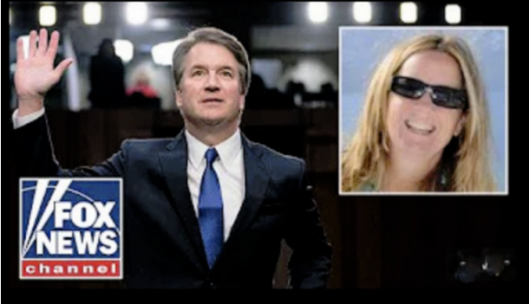 The Brett Kavanaugh story seems to be almost zombie-like.  It will be some time before it’s mostly over, but it seems likely to never die.  As I’m sure regular readers will recall, during Justice Kavanaugh’s Judiciary Committee hearing, more and more ostensibly noble and psychologically devastated victims who must be believed complained that a younger–30 years younger–Kavanaugh raped them—repeatedly–pretty much any and everywhere.  Being raped by Brett Kavanaugh was turning into a burgeoning cottage industry—except for one small detail: a complete lack of corroborating evidence, and most of the accusations were false.  One such story is told by Twitchy.com:

Someone tried a he-raped-me-in-a-boat story, but that one sank to the bottom almost immediately.

This referral stems from an anonymous ‘Jane Doe’ letter that the committee received in September that, in graphic detail, said Justice Kavanaugh had raped the letter writer and her friend ‘several times each’ in the back of a car:

On September 25, 2018, staffers for Senator Harris, a Committee member, referred an undated handwritten letter to Committee investigators that her California office had received signed under the alias ‘Jane Doe’ from Oceanside, California.1 The letter contained highly graphic sexual-assault accusations against Judge Kavanaugh. The anonymous accuser alleged that Justice Kavanaugh and a friend had raped her “several times each” in the backseat of a car. In addition to being from an anonymous accuser, the letter listed no return address, failed to provide any timeframe, and failed to provide any location — beyond an automobile — in which these alleged incidents took place.

But the Committee took the letter seriously and even questioned Justice Kavanaugh under oath about the allegation:

They read him the letter in full as part of the questioning. In response
to the anonymous allegations, Judge Kavanaugh unequivocally stated: ‘[T]he whole thing is ridiculous. Nothing ever — anything like that, nothing . . . . [T]he whole thing is just a crock, farce,wrong, didn’t happen, not anything close.’ Later that day, September 26th, the Committeepublicly released the transcript of that interview with Judge Kavanaugh, which included the full text of the Jane Doe letter.

But Jane Doe must be believed because she’s a woman! We can’t even be sure of that, but she/he/it/zir must be believed!  The damage to Kavanaugh’s reputation, the presumption of innocence and due process, doesn’t matter!

On October 3, the Committee’s staff received a letter from Judy Munro-Leighton, who identified herself as Jane Doe.

Investigators were finally able to speak with her, only to learn she lied about everything:

She further confessed to Committee investigators that (1) she ‘just wanted to get attention’; (2) ‘it was a tactic’; and (3) ‘that was just a ploy.’ She told Committee investigators that she had called Congress multiple times during the Kavanaugh hearing process – including prior to the time Dr. Ford’s allegations surfaced – to oppose his nomination. Regarding the false sexual-assault allegation she made via her email to the Committee, she said: ‘I was angry, and I sent it out.”

When asked by Committee investigators whether she had ever met Judge Kavanaugh, she said:  ‘Oh Lord, no.

I’m sure he did it anyway, maybe this time on the back of a moped while dressed like Elvis–“hunka hunka burnin’ love, whoo!”  Women must be believed!  So might this from Fox News:

An investigation into sexual misconduct allegations against Supreme Court Justice Brett Kavanaugh by multiple women found that no witnesses could provide evidence to substantiate their claims, a letter to Senate Republicans from the Senate Judiciary Committee chairman said Friday.

According to the 414-page report released by Sen. Chuck Grassley, R-Iowa, investigators interviewed more than 40 people, monitored social media and news reports and reviewed evidence provided by the judge and his accusers.

‘Following the separate and extensive investigations by both the Committee and the FBI, there was no evidence to substantiate any of the claims of sexual assault made against Justice Kavanaugh,’ the report states.

Investigators found no evidence to support either woman’s claims. Swetnick also made several contradictory statements about her claims during television interviews and refused to speak with committee investigators, the letter said.

‘Indeed, the evidence appears to support the position that Julie Swetnick and Mr. Avenatti criminally conspired to make materially false statements to the Committee and obstruct the Committee’s investigation.

Prof. Jacobson at Legal Insurrection summed it up well:

I think Prof. Margot Cleveland summed it up best:

‘Final Point: On Tuesday, remember what Dems did to Kavanaugh.

On election day, Normal Americans remembered that reasonably well, but we will probably never know the complete extent of the Democrat’s conspiring with various women to try to bury Justice Kavanaugh in a mountain of false accusations ,but we know with certainty some members of the Judiciary Committee knew about and sat on allegations. Any rational human being would have to know the allegations were groundless, even if they didn’t have a hand in making them.

In the Kavanaugh affair Democrats proved they are people completely devoid of honor and integrity, unlike their target, Justice Kavanaugh.  “Justice Kavanaugh.”  That has a nice ring, doesn’t it?  Now that they have the House, they promise to make their vile cruelty toward Brett Kavanaugh seem like a church social by comparison.

Truly, we live in interesting times.