All too often, much of the news and commentary on SMM, and virtually everywhere else, is distressing. We tend to forget the goodness, kindness, generosity, altruism and decency that are the hallmarks of America and Americans. We allow the enemies of Americans–Americans In Name Only (AINOs) and their allies–to dominate the news, and to malign all that is good and true and indispensable about America. Sometimes it takes the death of one of us to remind us what is not usually news is more newsworthy than anything. Fox News Reports:

The emotional sight of a fallen soldier being returned to her family brought almost an entire plane of people to tears.

The moment was captured by one of the passengers on Sept. 13 and posted on Facebook the following day.

When a Delta flight landed at Will Rogers World Airport in Oklahoma with the body of a fallen sailor, passenger Mike Helms, who posted a picture online, said the captain made an announcement to explain the situation.

‘The pilot announced that he would like to inform us that we were flying one of our fallen soldiers home to her family,’ Mike Helms said in his Facebook post. ‘He asked that we remain on the plane until our soldier was removed from the plane first. He also asked that we give a moment of silence.’

The soldier was Brooke Newton, of the U.S. Navy, who died in San Diego, Calif. on Aug. 30, according to her obituary in the Edmund Sun. While they waited, Helms said he looked out the window at the heartbreaking scene below. 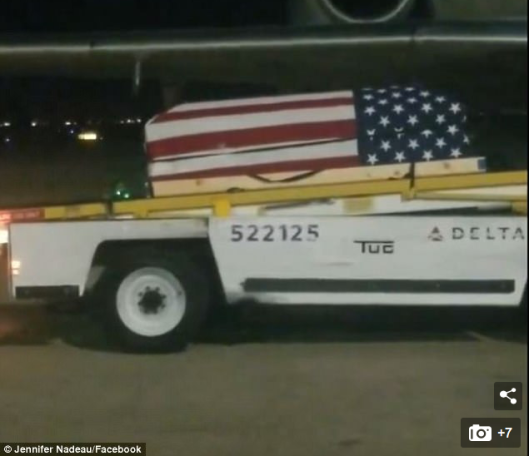 He described Newton’s mother and father crying at the casket and fellow soldiers off to the side saluting her. [skip]

Helms’ post on Facebook has gone viral and even made its way to the family, who reached out and thanked him.

Brooke Newton was 25-years-old when she died. She joined the Air National Guard after graduating from high school in 2010, according to her obituary in the Edmund Sun. She later joined the Navy while attending college at the University of Central Oklahoma.

I  never knew Brooke Newton, but as with all veterans, she was my sister in arms. As I type this, tears flow for her, for her family, and for the country she loved and served. And a little of me–a little of all patriotic Americans of good will–accompanies and protects her–forever.

10 thoughts on “Brooke Newton; The Unity Of America”