In August of 2012, I began a three part series titled “NYC: Bad Tactics and Socialism,” based on the police shooting of a murderer on NYC streets.  Unfortunately, two officers not only shot the killer, they also shot nine bystanders.  Fortunately, all were wounded, not killed, but the problem is obvious: How can two supposedly trained officers put as many bullets into innocent bystanders as an armed gunman?  Answer: Bad and rare training, as I noted in the article. 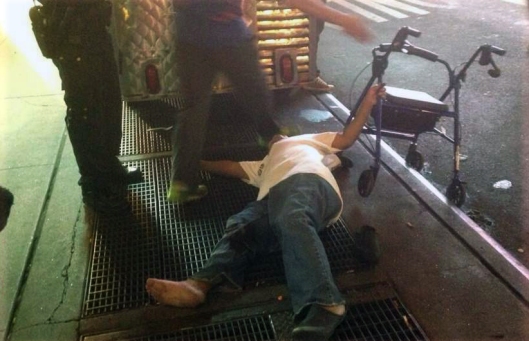 The second article in the series dealt with the fact that the NYPD mandates trigger pulls of at least 12 pounds, and two of the three semi-automatic pistols they authorize have double-action only triggers.  This conscious and continuing decision makes handgun accuracy difficult at best, even if officers were competently and regularly trained.  With handgun trigger choices like this, it’s surprising the officers hit the killer at all and unsurprising they shot many bystanders.

The third article in the series dealt with the use of force, and explored the serious drawbacks of potential alternatives–such as tasers–to handguns.

The lessons learned from that series are stark and simple:

(1) Most police officers are not gun guys and girls.  They own few, if any firearms, and seldom, if ever, practice.

(3) Most qualification courses have generous passing scores, involve only stationary targets at known ranges, and officers are allowed to shoot as many times as necessary to pass.  Many have to shoot many times.

(4) Many law enforcement agencies use only cheaper practice ammunition for qualifications.  It produces much less muzzle flash, recoil and report than duty ammunition.  As a result, many officers have fired their duty guns with duty ammunition only once or twice.

(5) New York City political forces are generally virulently anti-gun, with all of the destructive baggage that crippling viewpoint carries.

(6) Mandating 12-pound double action only triggers, means that handguns have long, very heavy trigger pulls that make accuracy difficult at best, even for experts.  Glocks available to the public have standard 5.5-pound triggers.

(7) Mandatory 12-pound triggers prove that the NYPD does not trust its officers with handguns, and is determined not to adequately train them.  A very heavy trigger is a foolish measure intended to prevent accidental discharges, but has the unintended consequence of ensuring bad marksmanship, which inevitably produces accidental shootings of innocents.  The weapons allows NYC officers are listed in the aforementioned second article.

The NYPD has apparently learned nothing, because it has happened again. The New York Post reports:

Theodora Ray, 54, was struck in her leg — breaking two bones in her calf — as she stood leaning on her four-wheeled walker across from the terminal; Sahara Khoshakhlagh, 35, was grazed in her buttocks.

Two cops pulled off a total of three shots in the mistaken belief that the deranged Glen Broadnax, 35, was armed after he reached into his pocket as they approached him, officials said.

Broadnax took his hand out of his pocket and ‘simulated shooting the officers,’ Police Commissioner Ray Kelly told reporters.

‘He’s got a gun!’ witnesses said someone in the crowd shouted just before shots rang out.

She was rushed to Bellevue Hospital where Kelly visited her before speaking to reporters waiting outside.

Oddly, the NY Post article does not mention whether Broadnax was actually hit by police bullets.  ABC News corrects that oversight:

A cell phone video shot at the scene shows officers chasing the 35-year-old suspect Saturday night in the midst of one of New York City’s busiest intersections, weaving in and out of traffic in what police said looked like an attempt to get hit by a car.

‘One officer saw him out in the middle of the street, he obviously was causing a disturbance,’ NYPD Commissioner Ray Kelly said in a news conference. ‘Cars were trying to avoid him… It appeared that he wanted to be struck by the cars.’

When officers approached the suspect, he appeared to reach into his pocket to draw a gun. Two officers then fired a total of three shots, ABC station WABC-TV in New York reported. While they missed the man, they accidentally hit two women instead.

It’s hard to imagine a worse public relations debacle.  Two officers fire three rounds, completely missing their target, and shoot two innocent women, one of whom is already crippled and in need of a walker, and they shoot her–where else?–in the leg.

Let’s get this issue out of the way first: if media reports are accurate, the officers were probably justified in shooting, but let me qualify that.  Unless one adopts the belief that the police may shoot whenever a citizen does something that even the least trained and competent police officer perceives to be threatening, the situation becomes much more complex.  Could the officers have waited the extra fractions of a second necessary to be sure that the man actually had a gun in his hand before shooting?  Of course they could.  Could these particular officers have waited?  Perhaps not.

The standard for such things is what a “reasonable police officer” would think and do.  Several times in my career, I was confronted by people who reached into coat or pocket in a manner that could have produced a gun.  In one case, the man produced a billfold.  In another, he pulled out a cell phone.  In both cases, the men were suicidal and simulated motions that could easily have been mistaken for gun-drawing motions.  They wanted to commit suicide by cop, but I didn’t play along.

In both cases, I drew my handgun and went to ready.  In both cases I was able to wait the extra few fractions of a second to be certain about what they had in their hands. In both cases, I quickly holstered my handgun, handcuffed and searched  them, and we were off to the mental health lockup for an involuntary commitment.

In both cases, I might have been justified in shooting.  I had police and other witnesses, and probably, I would have been cleared, but I absolutely wouldn’t have slept well for a very long time, if ever, because I would not have missed.  How do I know?  I was a gun guy.

I regularly practiced with my duty weapon, and I practiced for just that sort of scenario, a split-second, panic-inducing situation requiring absolute focus, calm and accuracy.  I came in every day and spent fifteen minutes on our indoor range drying firing, drawing, and practicing presentation from the front, sides, and rear.  As a result, I knew exactly how quickly I could draw and put a round on target from any range.  I knew precisely how much time I had and how much I could afford to wait.  I was the only officer in a hundred+ man force that did that.

I trust, gentle readers, you see what I mean.  Those New York officers probably couldn’t afford to wait.  They didn’t have the skills.  Many, if not most, officers couldn’t afford to wait.  They were, in essence, the “reasonable police officer” about which I write.  Their training and individual initiative gave them no better skills.  Therefore, by the standards of the NYPD, they were reasonable police officers and acted reasonably.

The question is whether the residents of New York City, and the politicians and police administrators they’ve hired, care, and if they care, whether they are willing to do the right things about it so that NYPD officers have a much higher standard of what is reasonable, so that 54 year-old crippled women requiring walkers are not further crippled or killed by their own police force.

Here’s what would make a difference:

(1) Issue only Glocks with the standard, 5.5 pound trigger available to the general public.

(2) Put every officer though Glock transition training to ensure they are comfortable and proficient with their handguns.

(3) Require training in high-stress shooting situations at least once a year, and twice a year qualification with duty ammunition.  Such training must not be the same course of fire every time.

These simple steps would greatly reduce the probability that officers would shoot innocents because they would be more confident with their handguns, more accurate, and have a higher hit probability.  Accurate handgun shooting is difficult.  It requires not only regular, realistic and correct practice, it requires the ability to isolate the trigger finger from the rest of the hand so that its movement does not cause sympathetic muscle reaction in the hand.  This involuntary “squeezing” causes the muzzle to fly off target as the trigger is pulled, causing misses even at very close range.  The longer and heavier the trigger–and 12 pounds is a very heavy trigger pull–the more difficult it is for the shooter to achieve this isolation.  A 12 pound trigger is sufficient to cause fatigue very rapidly, further degrading accuracy.

Of course, these changes would require that the political and police leadership of NYC put aside their common hatred of guns and related issues and actually accord their officers a minimal level of trust.  It would also be relatively costly.  However, I suspect the settlements the city will end up paying these innocent victims of bad policy would more than make up for it, particularly over the course of several years.

Until then, I’ll continue to report whenever NYC officers shoot up the innocent with handguns that make such shootings an easily foreseeable conclusion.