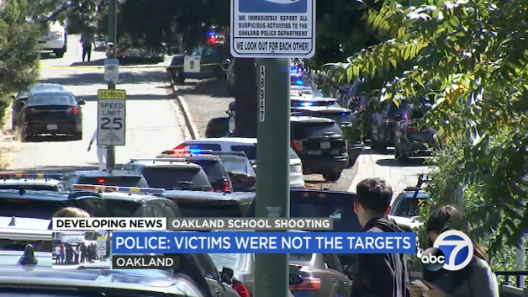 Today, gentle readers, we return to the front lines in the battle for the future.  We begin in Oakland, California, where school officials are accused of implementing their own version of opposing the police:

Another disturbing headline about the shooting in Oakland comes from the ABC7 I-Team, law enforcement sources tell us school officials have sent text messages to shooting victims, instructing them not to cooperate with police.

We’re hearing it’s a pattern, and some parents at the school are worried that a lack of action by school officials after previous incidents may have led to this escalation in violence.

Oh, but that’s only what the police say, and all right—left–thinking people know they always lie.  Where’s the proof?

Law enforcement sources tell the I-Team, Oakland police investigators have obtained text messages from the shooting victims’ phones in which Rudsdale school officials tell them not to cooperate with police.

During a virtual news conference, the I-Team’s Dan Noyes asked Oakland Police Chief LeRonne Armstrong about that information. He answered, ‘Our investigation will be thorough, it will be complete and we will exhaust all options to figure out what happened on this campus. But at this time, I will not speak to any evidence that we’ve recovered at this time.’

He would not deny it, but Oakland Unified School District spokesman John Sasaki did say, ‘If you’re asking me if our school told students not to talk to police, that is not correct.’

Could there be a more lawyerly non-response?  It will be interesting to see their response when the police produce the text messages—if they’re allowed to do that.

Former Oakland City Council President Ignacio De La Fuente says, his connections inside the police department tell him, Rudsdale school officials have a history of failing to protect students, and that Oakland Unified has not done enough either.

Why would school officials refuse to protect students?

‘If you remember, the school district used to have their own police, then OPD was serving some of the schools with campuses, they actually threw him out because they didn’t want uniformed police officers on their campuses, these things happen because we allow them to happen,’ said De La Fuente.

The I-Team’s law enforcement sources tell us this is part of a disturbing pattern by officials at that school – a lack of cooperation with police, especially after one troubling incident just weeks ago.

‘A kid was stabbed. He was bleeding. He was pistol-whipped. A gun was discovered at school. And yet the school district did nothing about it,’ said BayTech parent Mario Juarez.

Police confirmed in August, a student was stabbed and pistol-whipped at the school. And my police sources tell me that Rudsdale obstructed the investigation:

*School officials recovered the gun used in the attack.

*Kept it from police for hours, until finally turning it over in a zip lock bag.

*School officials said, ‘They had it under control.’

What’s happening here is as simple as it is common in blue states and cities.  School authorities are interested only in social justice, not actual justice, which means their interest in educating children runs a poor second, or perhaps third or fourth.  They are D/S/Cs concerned about political and social/sexual indoctrination.  These are the people who refuse to discipline students—they call it “restorative practices,” or “restorative justice”–particularly non-white students, and who try to deny parents any role in the education of their children.  As I’m currently writing in the annual school attacks series (enter “school attacks 2022” in the SMM home page search bar to find the series) they also hate guns and the police to the point they equate police officers with guns and don’t want either anywhere near schools.

Such people don’t want to admit crime occurs in the socialist utopias they’ve established in their school buildings.  How could crime exist under their enlightened, equitable and utopian rule?  Teachers and students are routinely attacked, seriously injured, even killed.  Extortion, theft, destruction of property and drug dealing are rampant, and because there is no order, there is little or no learning.  Were the full extent of the actual criminality widely known–most of it is committed by non-white kids–their world view would be exposed as not only fraudulent, but deadly destructive.

Does it make sense now, gentle readers?  We move to Vermont: 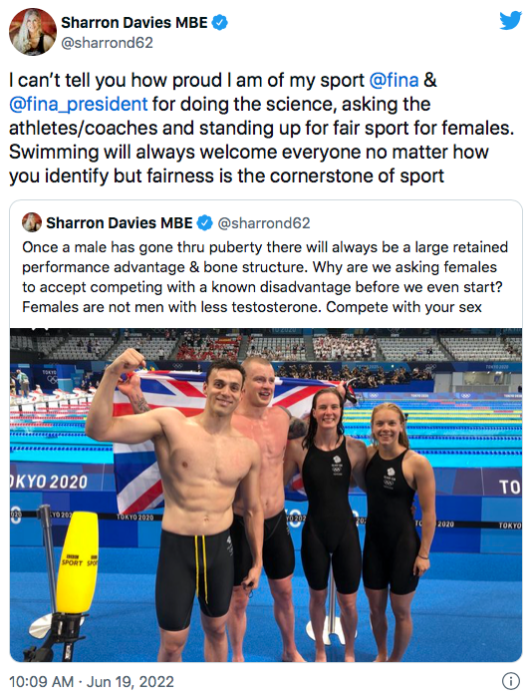 A high school in Vermont banned girls on its volleyball team from their own locker room after they expressed discomfort with changing in front of a male who pretends to be a female.

Teen girls on the Randolph Union High School volleyball team said a male student claiming to be transgender reportedly ‘made an inappropriate comment while members of the volleyball team were getting changed.’

But of course.  High school boys, particularly mentally ill boys, or those pretending to be female for advantage in sports, can absolutely be trusted to be gentlemanly and discreet when surrounded by naked girls in a locker room.

When players and their parents raised concerns about teen girls sharing intimate spaces with someone of the opposite sex, the school told them state law allows for students claiming to be transgender to use whichever bathrooms and locker rooms they desire. The school is also investigating whether the team violated the school’s harassment, hazing, and bullying policy.

‘My mom wants me to do this interview to try to make a change,’ one of the volleyball girls, Blake Allen, told local news outlet WCAX3. ‘I feel like for stating my opinion — that I don’t want a biological man changing with me — that I should not have harassment charges or bullying charges. They should all be dropped.’

In addition to threatening punishment for students for speaking up about their discomfort, school administrators claimed that girls who do not want to share their protected space with the opposite sex should go out of their way to ‘change in privacy.’

‘They want all the girls who feel uncomfortable — so pretty much 10 girls — to get changed in a single stall bathroom, which would take over 30 minutes. Where if one person got changed separately, it would take a minute, like no extra time,’ Allen said.

Here’s the best part: the complaining girls have been banned from their own locker room.

In that same email to parents, high school officials said their investigation will primarily focus on allegations that the girls harassed the transgender student even though the school’s harassment policy specifically bars the kind of inappropriate comments the male student allegedly made.

‘A hostile environment exists where the harassing conduct is severe, persistent or pervasive so as to deny or limit the student’s ability to participate in or benefit from the educational program on the basis of sex,’ the sexual harassment section of the school handbook states.

Were I the father of one of these girls, I would be sore tempted to prove Mencken right.  Where social justice is imposed on an unwilling, sane populace and the “authorities” embrace lunacy and harm, Normal Americans, when driven past the point of all endurance, will inevitably impose actual justice.  You will not be surprised, I’m sure, to hear the school district has not responded to requests for comment.

Finally, we travel to Rhode Island for a continuing story of woke destruction: 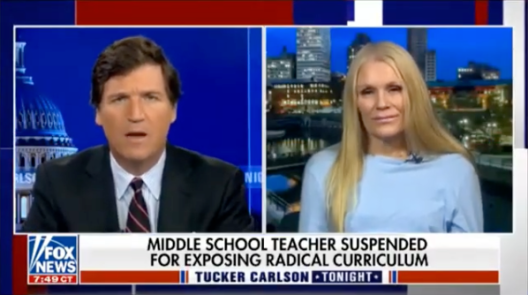 As previously mentioned, Providence (RI) whistleblower teacher Ramona Bessinger has been subjected to increasing attacks at Classical High School in Providence, including a protest against her today which Bessinger asserts was assisted by other teachers. This is the culmination of over a year of retaliation and harassment after Bessinger blew the whistle in July 2021, I’m A Middle School Teacher And See How Critical Race Curriculum Is Creating Racial Hostility In School.

We covered the latest development of an organized protest against her in Whistleblower Providence (RI) Teacher Ramona Bessinger Under Attack Again, Teachers Helping Organize Student Protest Against Her: 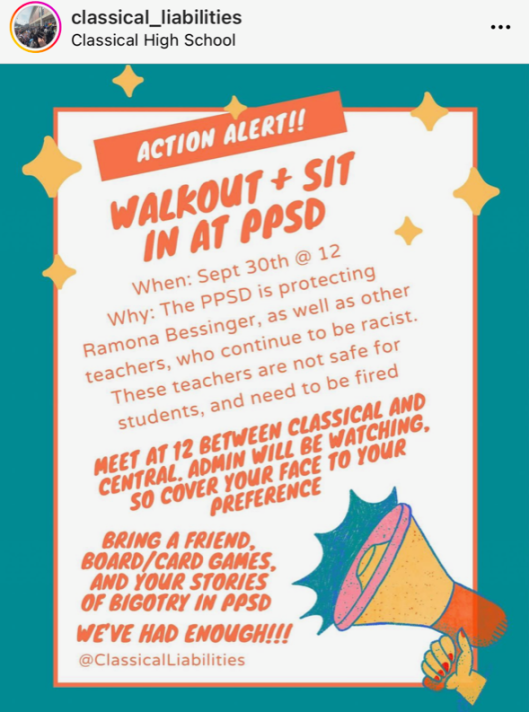 Some students at Classical are organizing a walk-out and protest against her, aided she has learned by teachers at Classical and her former middle school. Bessinger has provided the names of those teachers to her principal and other administrators and teachers union officials, asking whether it was appropriate for teachers to be organizing students against another teacher. 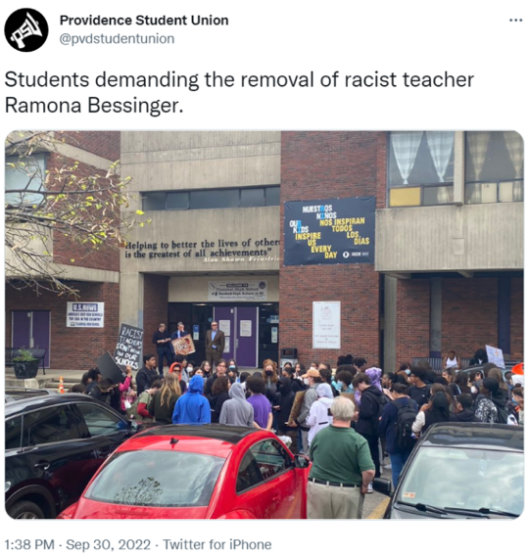 The protest did occur, but only about 40 kids showed up.  The adult organizers of the protest urged students to cover their faces ala Antifa and BLM, so they couldn’t be identified or punished, but they apparently didn’t care, probably believing since they were virtue signaling, they’d be invulnerable.  I suspect they were right.  To date, the school district has not in any way supported or defended Bessinger, who by all accounts is an exemplary, professional teacher.  There is also no evidence Bessinger is remotely racist, quite the opposite.  That’s no doubt why her woke colleagues want to destroy her: her existence makes them look like the fools, frauds and losers they are.

Bessenger is represented by Judicial Watch (which she wrote about in a prior post at Legal Insurrection), which sent a Letter this morning to the Superintendent of Providence Schools, demanding an end to the school-sanctions harassment of Bessinger (emphasis added):

We represent Ramona Bessinger, a 24-year veteran teacher at Classical High School. As you may be aware, Ms. Bessinger has spoken out publicly regarding her concerns about the current curriculum in Providence Public Schools. As a result, Ms. Bessinger has been subjected to a continuing campaign of retaliation and harassment related to her protected First Amendment expression. Among these actions against Ms. Bessinger was her being involuntarily transferred last year and left to sit in a school basement without any duties for nine months. After Ms. Bessinger grieved this wholly inappropriate action and an arbitration was scheduled, PPSD reversed its position without explanation, and finally restored Ms. Bessinger to the classroom.

The harassment and retaliation against Ms. Bessinger, however, has not ceased. As you may be aware, it has now culminated with a planned teacher/student protest of Ms. Bessinger scheduled for today at noon. The principal and other administrators at Classical High School apparently have endorsed this action against one of their own teachers. As a result, because of this school endorsement of the retaliation/harassment campaign against Ms. Bessinger, the threats and vitriol against her have only escalated, including at least one death threat.

Thus, gentle readers, do we see teacher’s unions, and some school districts, are among the most regressive, destructive forces in contemporary America.  I taught only in right to work states where unions had no political power, and I was fortunate to work for school districts that did not allow the kinds of lunacy I’ve chronicled here.  However, it is now more than clear in some states, cities and school districts, sending one’s children to public schools could reasonably be considered child abuse.  I’ll be keeping an eye on Bessinnger’s continuing story.