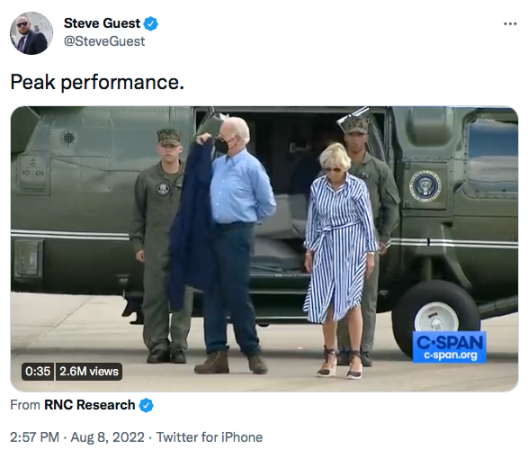 The next time Joe Biden challenges you to a pushup contest, counter with a “putting-on-your-coat” contest. 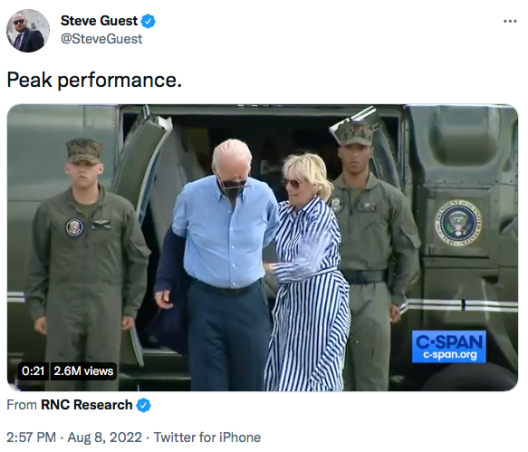 Imagine what those Marines were thinking, but it’s that kind of show of strength that leads to this: 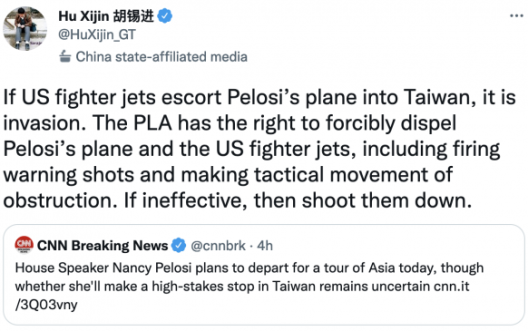 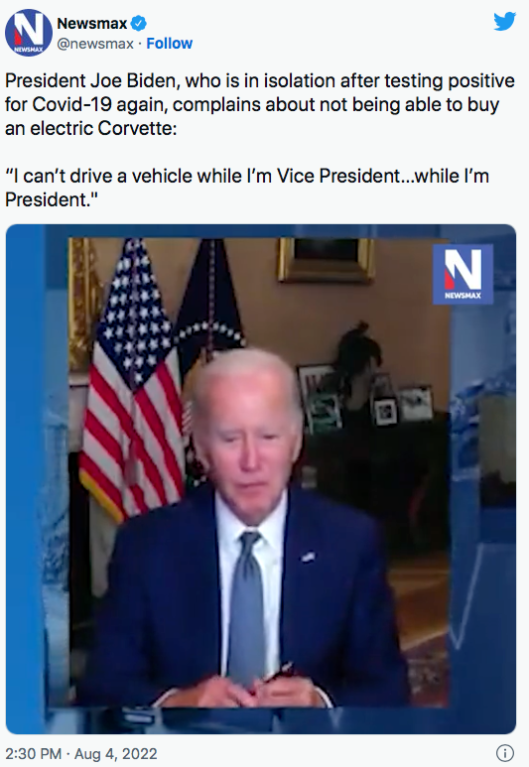 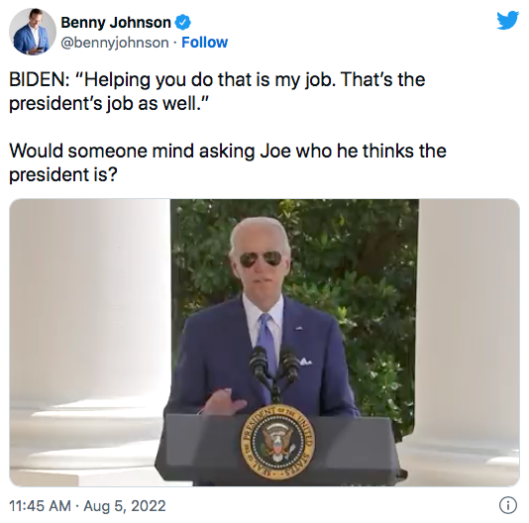 Do you really think he’d be able to answer?  And this is why we need to bankrupt the country to “fight climate change.” 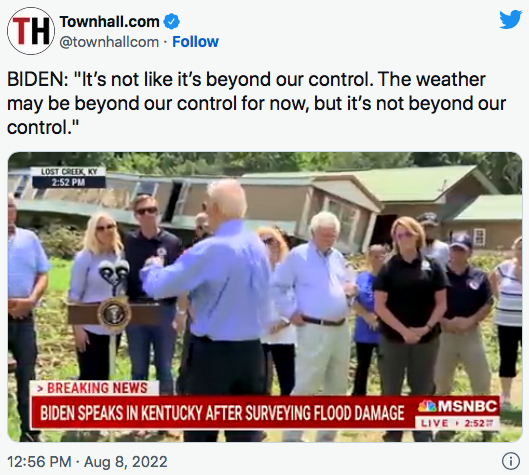 Thanks for explaining that to us, Joe.  Apparently Biden’s handlers told him “if it’s moving, shake its hand.” 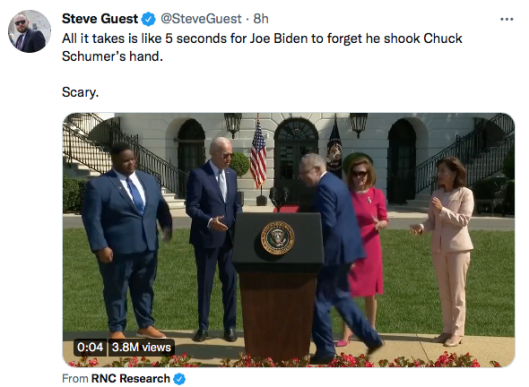 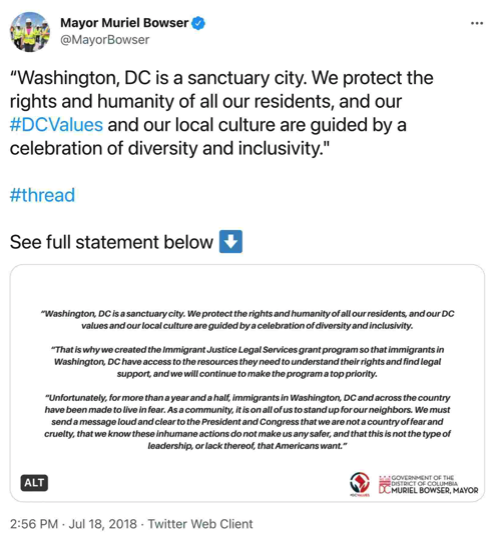 DC Mayor Muriel Bowser has reportedly requested that the district’s National Guard be activated to assist with illegal immigrants that are being bused to the nation’s capital. 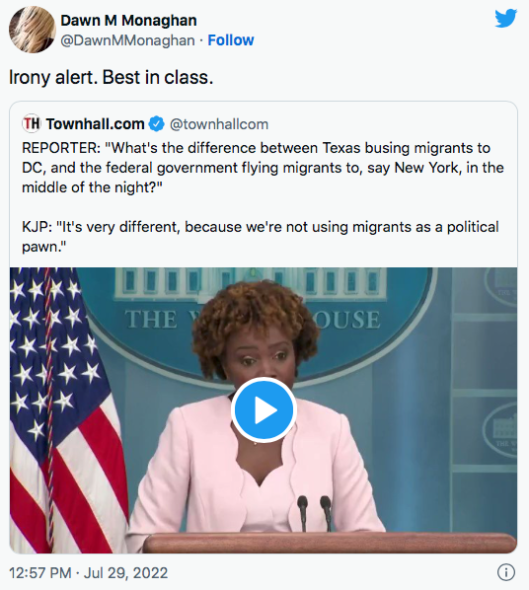 Well of course not.   D/S/Cs would never do a thing like that!  Unless, of course, they’re immigrating to New York City: 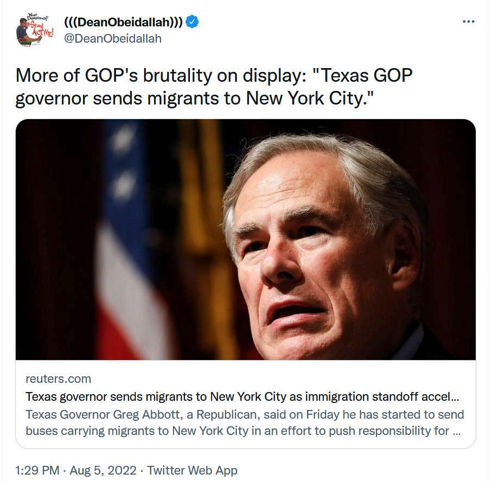 Those brutal Texans!  I have a question: why don’t these events happen anywhere near me, and… 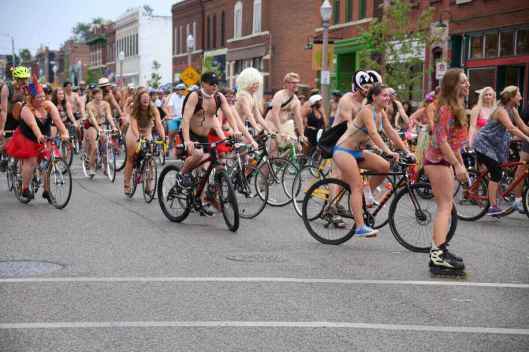 —why aren’t any of the naked bicycling women anyone I’d want to see riding a bike naked?  Hmmm.  I think I’m seeing a pattern here… 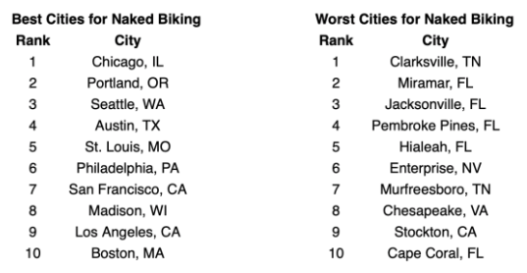 Wait, it couldn’t be the naked cities are all ruled by D/S/Cs, could it?  Naaaaah.  Gee, what could have caused this? 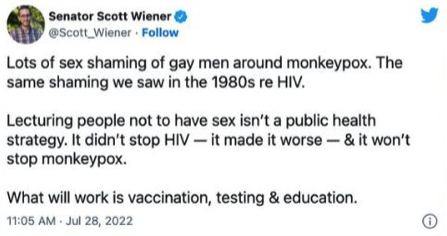 All 197 participants in this study were men (average age 38 years), of whom 196 identified as gay, bisexual, or other men who have sex with men.

A total of 71 patients reported rectal pain, 33 sore throat, and 31 penile edema, while 27 had oral lesions, 22 had a solitary lesion, and 9 had swollen tonsils.

Sore throat, penile edema, oral lesions, swollen tonsils?  Now what could possibly have caused that? Thank heavens the World Health Organization is on the job: 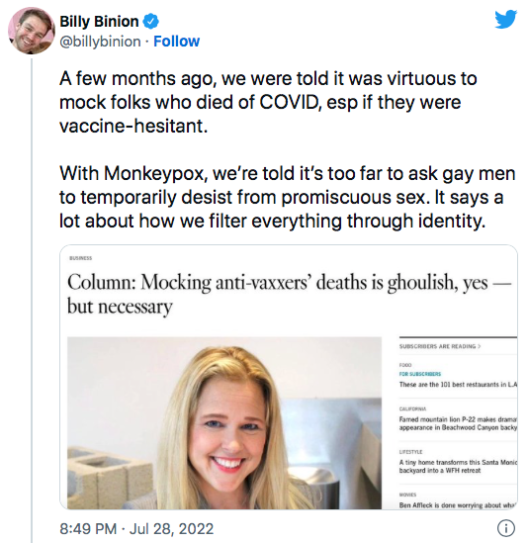 The World Health Organization announced that to mitigate the spread of monkeypox gay and bisexual men should “limit their number of sexual partners.”

‘For men who have sex with men, this includes for the moment, reducing your number of sexual partners, reconsidering sex with new partners, and exchanging contact details with any new partners to enable follow up if needed,’ Tedros Adhanom Ghebreyesus, the director general of WHO, advised on Wednesday.

According to Dr. Rosamund Lewis, WHO’s monkeypox expert, at least 95% of patients are men who have sex with men. 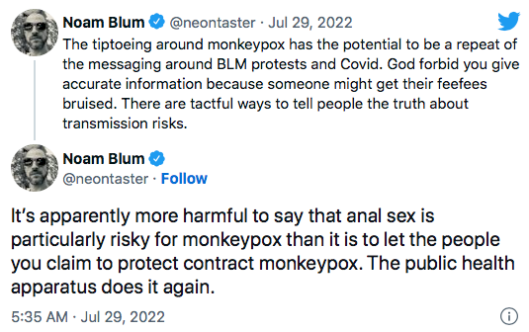 Wait a minute.  We can destroy entire economies, destroy children’s educations, force everybody to wear face diapers and arrest them if they try to go to church, but we can’t ask gay guys to stop having sex for awhile?  We can only ask them to maybe not spread the virus quite so much and with so many other gay guys they don’t know?  He’s a fiery but mostly peaceful journalist: 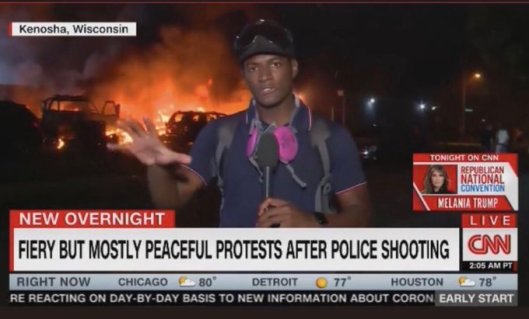 The CNN journalist best known for reporting from the burning scene of ‘fiery but mostly peaceful protests’ following the justified non-fatal police shooting of armed sexual-assault suspect Jacob Blake in Kenosha, Wis., has been nominated for an Emmy award.

CNN correspondent Omar Jimenez was one of five nominees in the ‘Outstanding Emerging Journalist’ category. A Washington Free Beacon analysis determined that the word ‘emerging’ is a euphemism for ‘non-white.’ Other nominees included Anna Kook of Al Jazeera Plus, the controversial media outlet funded by Qatari oligarchs, and Vice correspondent Paola Ramos, a ‘Latinx Communications Strategist’ who worked on Hillary Clinton’s failed presidential campaign in 2016.

President Joe Biden’s administration has confirmed a plan that would give identification cards to illegal immigrants.

The pilot program from Immigration and Customs Enforcement (ICE) is aimed at modernizing ‘documentation provided to some noncitizens,’ an ICE spokesperson told The Epoch Times in an email on July 29.

There is no condition, or lack of one, that is not CLIMATE CHANGE: 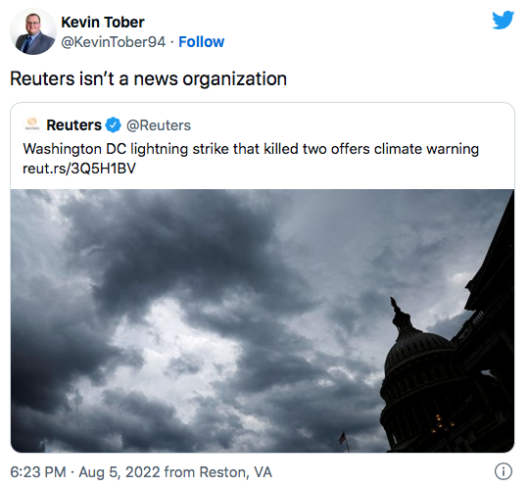 Reuters is being criticized by social media users for an article stating the lightning strike in Washington, D.C., that killed three people offers a ‘climate warning.’

‘Scientists say that climate change is increasing the likelihood of lightning strikes across the United States, after lightning struck at a square near the White House, leaving three people dead and one other in critical condition,’ the Reuters article states.

Officials in Washington, D.C., responded to reports of a lightning strike in the center of Lafayette Park, near the White House, on Thursday.

Julie Jaman, 80,was banned from Port Townsend’s Mountain View Pool after complaining about a biological male ogling young girls in the changing room. Jaman had been swimming at the pool for 35 years without incident, yet it was she who was banned and insulted by the employees and management.

After more than 35 years of swimming at Port Townsend’s Mountain View Pool, Julie Jaman, 80, says she is ‘distressed’ after being banned from the facility for calling out a biological man she says was watching semi-naked young girls in the women’s locker room.

Jaman told Friday’s Dori Monson show listeners that the incident started July 26 after she ‘heard a man’s voice’ while she was naked and showering in the women’s locker room at the facility, which is operated by the Olympic Peninsula YMCA and the City of Port Townsend.

‘I saw a man in a woman’s bathing suit watching maybe four or five little girls pulling down their suits in order to use the toilet,’ Jaman recalled. ‘I asked if he had a penis and he said it was none of my business. I told that man to ‘get out right now.’

After alerting a pool staff member to the situation, Jaman said she was ‘stunned’ when the staffer told her that she was ‘being discriminatory,’ ‘was banned from the pool forever,’ and that they were calling the police.

Just who does Jaman think she is?!  She’s not a genuine trans woman, that’s for sure.  Like this one: A 25-year-old biologically male cheerleader has been given an ‘assault by physical contact’ citation after getting into a verbal — and allegedly physical — altercation with a teammate at a cheerleading camp recently hosted at Ranger College in Texas.

The trans cheerleader, Averie Chanel Satchell Medlock, allegedly choked a 17-year-old female teammate who called Medlock ‘a man with a penis’ in the July 21 incident. A copy of the citation was published by KTAB Texas.

How dare that 17-year-old actual female engage in definition of character?! Science! 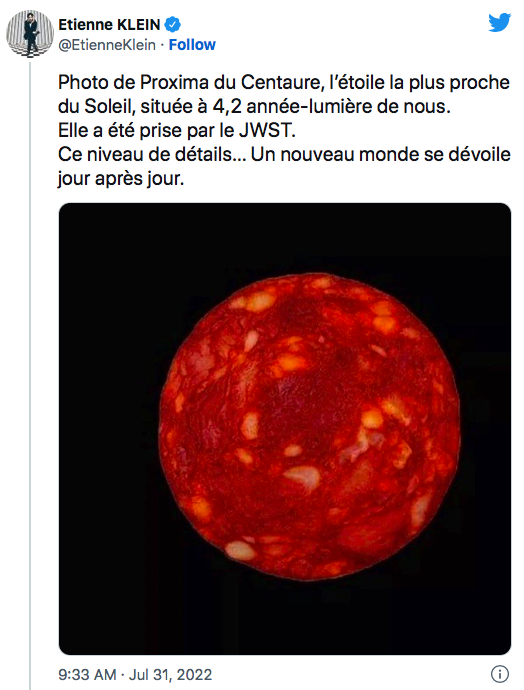 A French scientist has apologized after tweeting a photo of a slice of chorizo, claiming it was an image of a distant star taken by the James Webb Space Telescope.

Étienne Klein, a celebrated physicist and director at France’s Alternative Energies and Atomic Energy Commission, shared the image of the spicy Spanish sausage on Twitter last week, praising the ‘level of detail’ it provided.

‘Picture of Proxima Centauri, the nearest star to the Sun, located 4.2 light years away from us. It was taken by the James Webb Space Telescope. This level of detail… A new world is unveiled everyday,’ he told his more than 91,000 followers on Sunday.

What was that you were saying about the unassailable integrity of science again?  Oh noes:

Professors at top American universities are criticizing the merit system in academia, arguing the concept is a ‘barrier’ to realizing DEI outcomes.

‘Campus Reform’ spoke with one professor who criticized merit pay for its effect on the ‘gender gap in bonus pay.’

I’m retiring to my fainting couch…Ah, the nobility of congressional D/S/Cs… 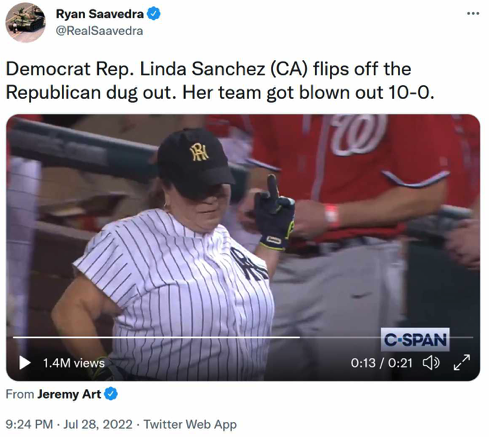 What would any edition of TSTS be without Kamala? 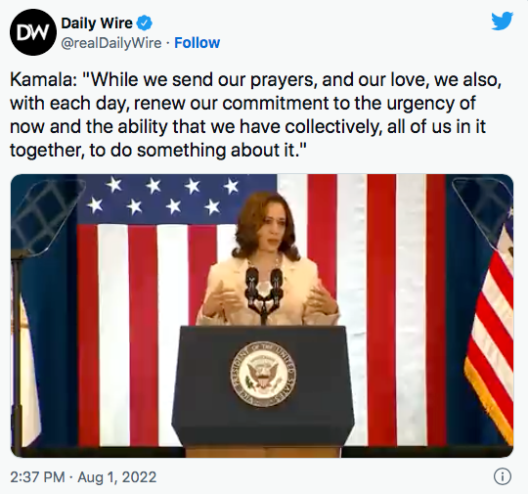 Who do these people think they are? 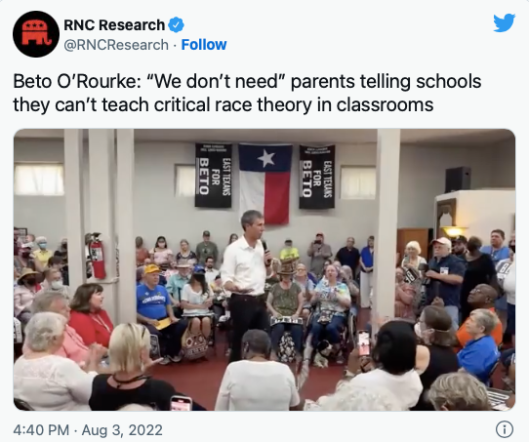 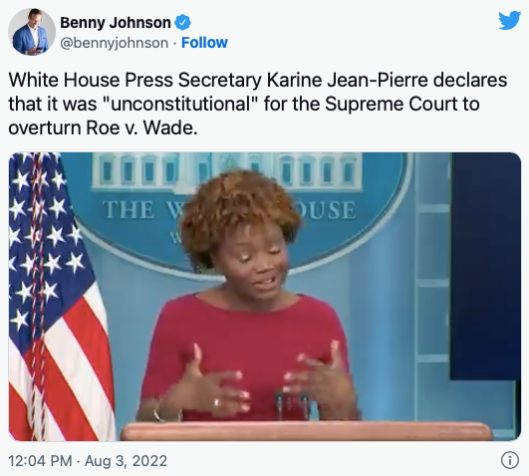 What does that Supreme Court think it’s doing interpreting the Constitution? 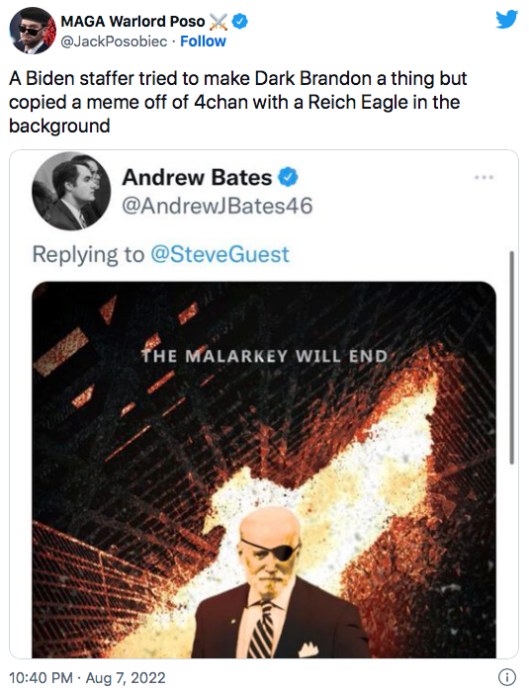 Yep, those White House whiz kids really are the best and brightest. 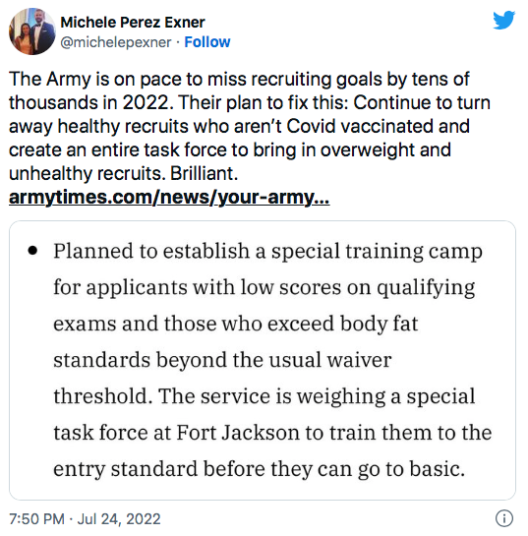 Because what scares Iran, Russia and China more than dimwitted, fat, trans, soldiers who announce their pronouns before shooting? 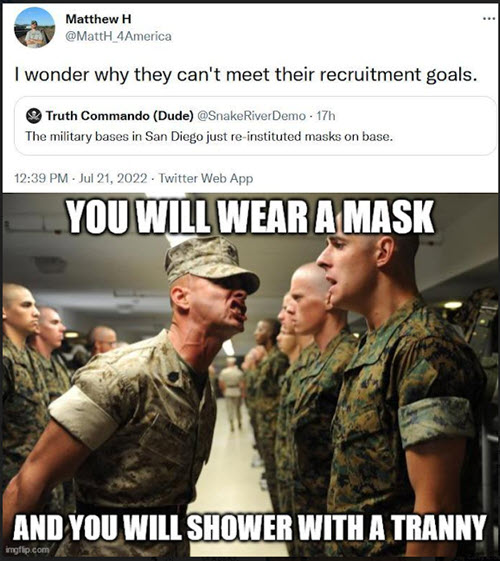 That would encourage me to join… 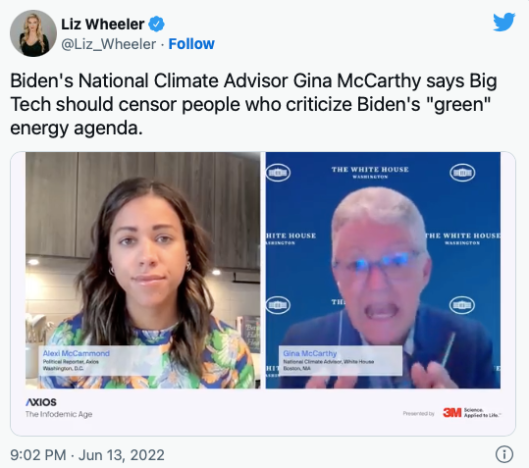 Of course, because f**k the Constitution. 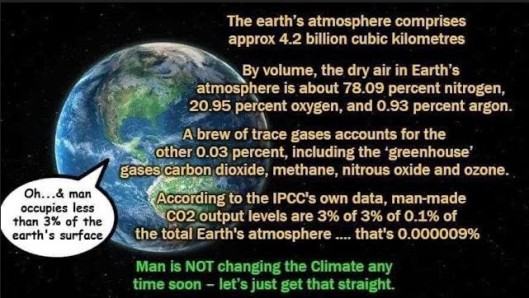 Oh, that’s why she wants critics shut up… 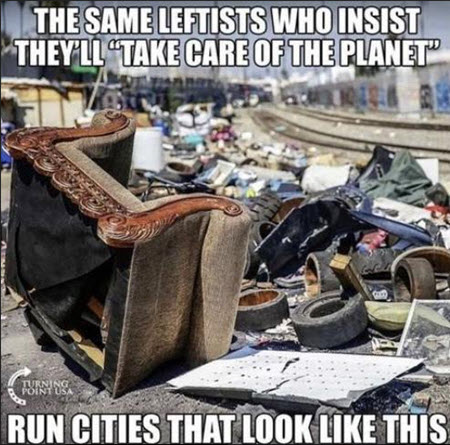 That too.  Perhaps if Marvel/Disney quit making woke superhero movies that suck?

While studios continue to make spin-off, sequels, prequels, reboots, and remakes of superhero movies no one asked for — each seemingly more woke than the last, see here, here, and here— Americans’ enthusiasm for men and women in capes is waning, a Morning Consult survey found.

The poll data shows that ‘enjoyment of the seemingly never-ending stream of superhero content continues to drop among U.S. adults — and among even self-identified Marvel fans,’ the report states. Between November 2021 and July 2022 the share of adults who say they enjoy superhero movies plunged five percentage points, from 64 percent to 59 percent. 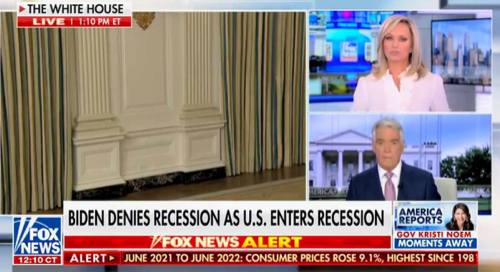 And finally, President Biden, after someone helped him into his coat, bragged July’s inflation rate was “0%.”