What are we to make of Democrats/Socialists/Communists, more particularly, those currently in charge of America’s government?  They appear to believe the unbelievable, to support and legislate for the perverse and destructive, to harm our allies and support our enemies, to believe and spread lies and to punish the truth, to cry about “our democracy” while doing all they can to destroy our Republic, to profess to defend the Constitution while conducting kangaroo courts that ignore its protections, and to love America while hating most of the people residing therein, except illegal immigrants and criminals.  They love them some of those.

Can they possibly believe in their Green New Deal lunacy?  It takes little research, and less intelligence to discover converting to a “green economy” is actually impossible.  Not only can wind and solar never provide our future energy needs, our current grid is proving inadequate for our current needs.  There aren’t enough rare earth and other minerals necessary to produce the solar panels and windmills, nor are there enough to produce electric vehicle batteries.  Better still, China owns around 80% of those minerals and the processing facilities necessary to render them useful.  Going green will turn over control of our energy to China, and thus, control of America to our most deadly and malicious enemy.

Where EVs are concerned, they’re far too expensive to be practical.  The top 7% of Americans in income drive EVs, because they’re expensive toys, impractical for most Americans, and there is no technology on the horizon that will change that.  Physics, even if one chooses to ignore it as D/S/Cs do, is always a limiting factor.  Particularly with a green non-power grid, we won’t have anything close to enough energy to charge a mostly EV American fleet, or to provide heat in the winter and air conditioning in the summer, or even to keep the lights on.

How can they persist in trying to resurrect the Iran deal, when Iran insults and ignores them at every turn and has never done anything but cheat?  How is it possible they ignore Iran’s constantly stated intention to destroy Israel and America as soon as they get nuclear weapons? 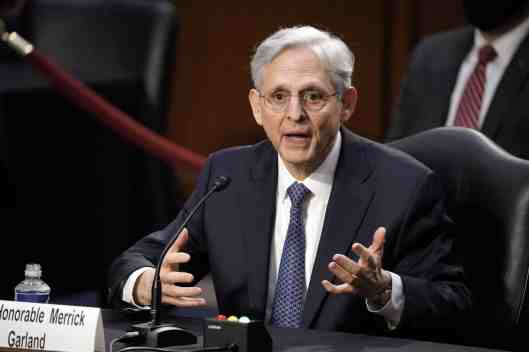 How can the Attorney General, the corrupt, cruel Merrick Garland, possibly believe white supremacy is the greatest threat facing America?  White supremacists are nearly nonexistent, and are justly thought social pariahs by virtually all Americans.  Most Americans had a personal connection to every American lost in the Vietnam War, either through family or by knowing someone who knew them.  Virtually none know, or have met, an actual white supremacist. 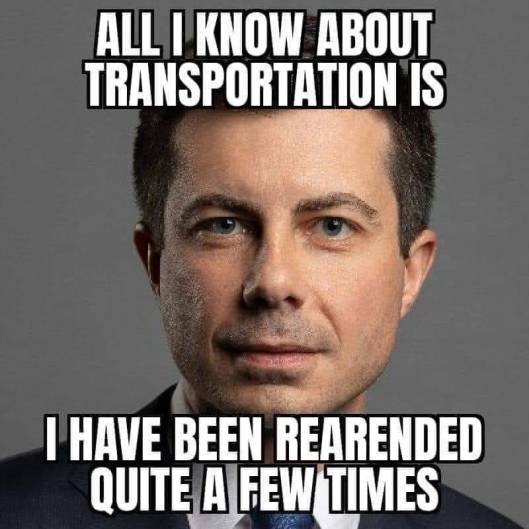 How can our dimwitted Transportation Secretary, Gay Pete Buttigieg, declare, with a straight face, highways racist?  I call him “gay” Pete because he—or whatever pronoun–is one of those public figures not who happens to be gay, but whose gayness defines him and much, if not all, of what he does and says.  How can he suggest the poor, even middle class Americans who can’t afford gas, save money by buying $60,000 dollar plus electric vehicles we don’t have the electric generation capacity to charge?

What are we to make of people like Energy Secretary Jennifer Granholm, who, when asked what she would do to make energy prices more affordable, laughed uproariously, declaring the very idea “hilarious?” 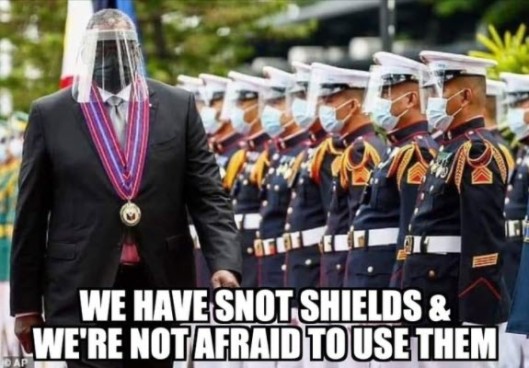 What of Secretary of Defense Lloyd Austin, who resembles no one so much as Idi Amin?  He has turned our military into a woke disaster, and has all but destroyed recruitment.  He, among other idiots, has declared Climate Change and exalting trans this or that among our military’s primary goals.  Our service academies now turn out not leaders, but diversity consultants fluent in the language of wokeness.

The FBI is focused on entrapping innocent Americans, and arresting elderly innocents in the early morning hours with accompanying CNN news crews who just happened to be in the neighborhood.  They’re illegally spying on Americans  and harassing journalists for not publishing information from the abandoned diary of Biden’s daughter, who muses her daddy took inappropriate showers with her when she was young.  They’re threatening parents who protest the arrogant and corrupt actions of local school boards, and in general, treating Americans like the enemies of America. 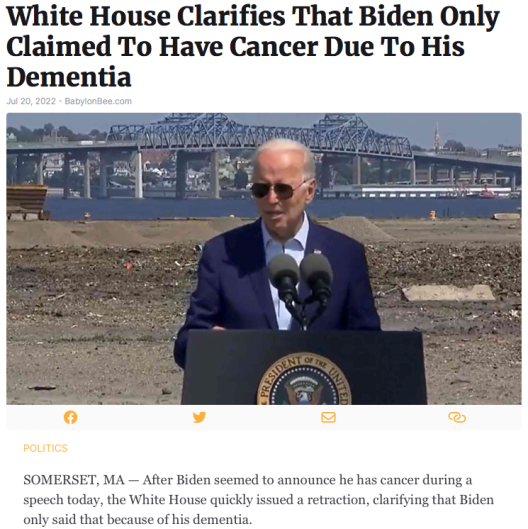 Our President is suffering from dementia, and was during the campaign.  Our Vice President is the textbook example of the Peter Principle, and is dimwitted and inarticulate to boot.  Both of them have convinced our enemies they can do pretty much anything they please, if for no reason other than that they certainly don’t defend America’s interests, and why should they?  They’re constantly telling the world America is a horrible country, chock full of racists.  Never has America been less respected and more reviled by countries with a fraction of our accomplishments and potential.  But one thing the rulers of those countries can do is smell weakness, and take advantage of it.

Seemingly, nothing is more important to our government than the elevation of trans whatever’s, drag queens, groomers, and pedophiles.  No one is more deserving of praise and legislation establishing special rights than these perverse and destructive defectives.  So valuable and essential to America are they, the Administration is threatening to deprive poor children of food if schools don’t roll over and let men pee in girl’s restrooms, beat women in athletics and display their dicks in girl’s locker rooms and showers.  This, to them, is what America is all about.

D/S/Cs believe we make America safer by defunding and harassing the police and by allowing criminals to do as they please.  Chicago, and other cities, won’t allow the police to chase felons.  Minneapolis allowed the D/S/C’s racist, anarchist, paramilitary wing to burn down a police precinct.  Portland and Seattle continue to allow them to do whatever they want.  As a result, our blue cities are third world war zones, no one is safe, and businesses and citizens are fleeing in record numbers.  Bail is eliminated, jails are emptied, and felons prey on the innocent, many of them black, are sometimes arrested, put right back out on the street, prey on others, and the cycle repeats. If they ever stand before a court, they get probation, or ridiculously short sentences.

Supreme Court justices are harassed in their homes in violation of very clear and simple federal law and the DOJ and federal law enforcement agencies don’t arrest a single criminal “protestor.”  Even an actual assassination attempt of a justice can’t prod Garland to actually do his duty.

Our border is wide open, and the moronic Alejandro Mayorkas proclaims it secure.  Never has a president so blatantly ignored his sworn duty to uphold the law—is there a more clearly impeachable offense?–and never has a DHS Secretary so blatantly assisted him.

I could go on and on and on, but what’s happening?  Do these people really believe these things?  Can they be that stupid?  That evil?

Certainly, some of them are.  Most, if not all, are true believers.  They really do believe what they say.  Others are cynical politicians and bureaucrats.  In exchange for political power, wealth, the acclaim of those like them and the media, and invitations to all the right parties, they’re willing to lie, cheat, steal, hurt anyone, and destroy America.  But all share D/S/C ideology to one degree or another.

Understanding D/S/C ideology is actually rather simple.  They are the self-imagined elite.  By virtue of the schools they attended, and by virtue of their titles, they are prima facie intellectually and morally superior, fit, even destined, to rule lesser beings.  You know, the Deplorables, the insurrectionists, the racists, the domestic terrorists, the white supremacists—Normal Americans, people who just want to be left alone to raise their families and live under the Constitution and the rule of law.  Normal Americans, to them, are worse than Hitler, the lowest of the low, and that being the case, there are few, if any, restraints on what they will do to them.

They also have one additional liberating advantage: they are unconstrained by reality. They use it when it’s to their advantage, but are free to ignore it when it’s not.   Their superior intellect and morality allows them to create their own reality unconstrained by the laws of physics, logic or God, and their political power, to varying degrees, allows them to force everyone else to live in it.  AG Garland is only too happy to supply the federal agents and guns, and CNN is only too happy to record it for posterity.

Because they are perfect, their policies are perfect.  They’re non-falsifiable, which is why the “science” to which they claim sole ownership, is not science at all.  It’s consensus.  Their “science is settled,” which is nonsense, because science is a process.  It is never entirely settled.  Throughout history, what was once established scientific fact has given way to new discoveries that more perfectly worked, that were replicable, that could be falsified.  That’s not true of D/S/C policies.  There is no evidence that can ever prove them wrong.  They are, by their very nature, non-falsifiable.

When one of their policies fails—as they always do—it cannot possibly be because they were wrong.  It must be because not nearly enough time has passed for the policy to reveal its wonders.  That’s why they want a new “assault weapon” ban.  Ten years wasn’t nearly enough the first time.  It’s also because not nearly enough money was spent for the policy to succeed.  It’s always also because their messaging wasn’t quite right.  They haven‘t yet hit on just the right acronyms, the right buzz words, the right memes to fool the Deplorables.  And of course, the media, which they control, was mean to them and didn’t appropriately praise their policy or tout its wonders.  Worse, they’ve magnanimously allowed Deplorables to continue to exist to resist their policies.

To be sure, at least some of what they do is out of hate.  They want to hurt their enemies in any way they can.  Some of their beliefs are mere spite.  Whatever Normal Americans hold dear, they reflexively oppose and denigrate.

They are, godlike beings that they are, eternally laboring to perfect mankind, which can be done only if the right policies are in place and the ungrateful normals are forced to think, act and speak correctly.  Sadly, they can never be satisfied.  Regardless of how much power they steal, even if they steal every individual liberty, it will never be enough, for the process of perfection is never ending.

Finally, they persist in believing socialism/communism are viable economic, ruling systems.  It’s just that no one has ever done them properly, and they, unlike all before them, despite the historical record of the inevitable failure of those evil ideologies that have murdered more than 100 million of their own people in the last century alone, are alone sufficiently morally, intellectually and scientifically advanced to make them work.  Top down systems, five-year plans producing bumper crops without fertilizer (pay no attention to Sri Lanka behind the curtain), shortages of every good including food, depriving people of property, possessions and liberty, forcing them to eat bugs for their own good, will succeed brilliantly if done right by the right people, people who think sexual deviants, drag queens and pedophiles the vanguards of culture and the pinnacle of moral rectitude.  And all will be happy, or government will show them what happens to people unappreciative of the glories of D/S/C government.  They have ways of making us be happy.

What’s that you say?  I’m exaggerating?  I’m not accurately describing the people and things I profess to explain?  Kindly provide then, any explanation that better describes what they’re doing and why.