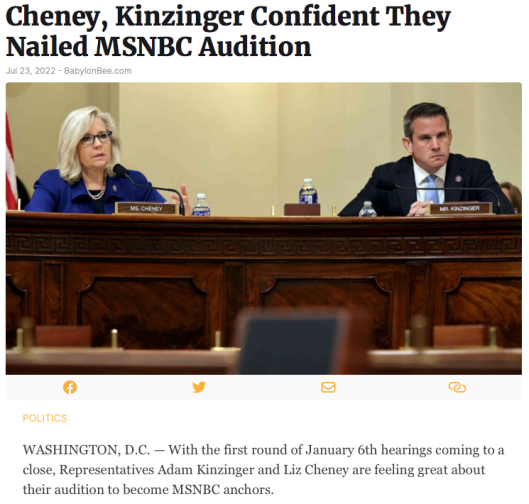 When your enemies are praising you, it’s never a good thing: 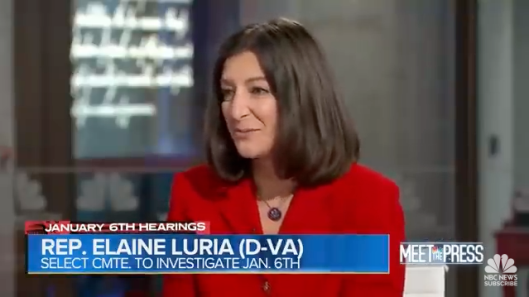 Sunday, during this week’s broadcast of NBC’s ‘Meet the Press,’ Rep. Elaine Luria (D-VA) argued for her January 6 House Select Committee colleague Rep. Liz Cheney (R-WY) to be the face of the Republican Party going forward.

Luria said her voice was ‘needed’ when asked about the prospects of Luria running for president as a Republican in 2024.

‘I admire Liz Cheney,’ she said. ‘I’ve been friendly with her ever since I came to Congress, even before we served on this committee together. And I think, you know, if she doesn’t come through this primary and come back to Congress, there are so many things that she can do in the future for our country.’

‘Her voice is absolutely needed,’ Luria added. ‘And I think she’s one of, unfortunately, a very small number of people who need to be the face of the Republican Party in the future.’ 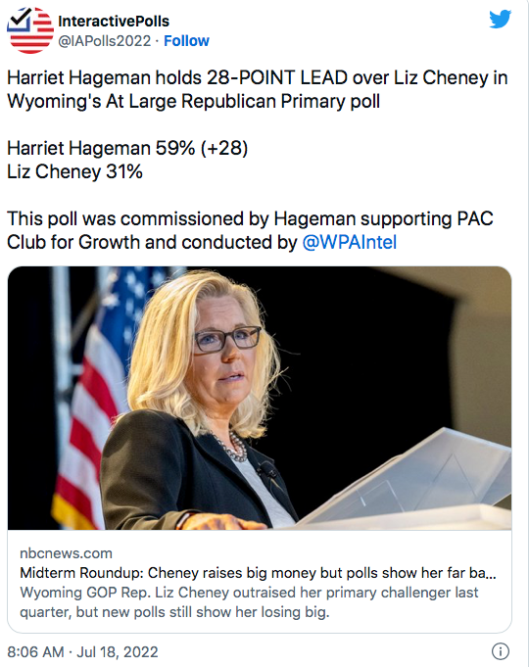 Fortunately, Wyomingites have a differing view. I’m posting this article today because the sheer volume of Cheney news is becoming overpowering.  Now D/S/Cs want Cheney to run for president in 2024:

The establishment media are hyping Rep. Liz Cheney (R-WY) for a 2024 presidential run, as it appears unlikely she will prevail in the 2022 Republican primary.

With Cheney down 30 points to Donald Trump-endorsed Harriet Hageman, many in the media suspect Cheney will lose the August 16 primary and are, as a result, already repositioning her for a political comeback as a career politician in 2024.

I wouldn’t bet on that one.

The Associated Press also hyped a potential Cheney 2024 bid on Friday with the title, ‘Liz Cheney braces for primary loss as focus shifts to 2024.’

The media’s idea of Cheney running for president in 2024 would likely fail in the GOP primary. Trump has maintained a commanding lead over potential 2024 primary contenders, according to a Wednesday Morning Consult/Politico poll. The poll found Cheney is only polling with 2 percent of the vote while Trump garners 53 percent.

That didn’t stop Kamala Harris from becoming Vice President, but Cheney is ultra white and was born in Wisconsin. Let’s look in on Harriett Hageman:

Rep. Liz Cheney (R-WY) is preparing for a busy August in Washington, DC, away from the Wyoming campaign trail where she lags Trump-endorsed Harriet Hageman by 30 points.

Cheney’s participation with the January 6 committee is sure to distract her focus on the Republican primary. With the Wyoming primary election on August 16, most members will be focused on winning reelection in their home districts. But for Cheney and her partisan January 6 Committee, ‘August is expected to be a busy month,’ CNN reported. ‘Committee members feel they have just scratched the surface.’

Instead of visiting Wyoming to knock on doors, hold local rallies, and attend campaign events, Cheney will be fixated on former President Donald Trump in Washington, DC, where the committee ‘is still gathering evidence and has reengaged in negotiations with some witnesses who had previously resisted sitting for a deposition.’

D/S/Cs continue, in a panic, to try to save Cheney:

Noting that Cheney is well behind in the polls, by 30 points, Dionne Jr. wrote in the Daily Star that the endangered Democrat ally “needs” all the help she can get from the Democrat party in the open GOP primary.

‘Vote for Cheney. Now there is a sentence I never expected to write,’ Dionne Jr. wrote before observing that Cheney’s participation in the partisan January 6 Committee has hurt her chances of remaining in Congress.

‘She has long known what the Star-Tribune poll found: that her eloquent leading role in the hearings investigating the Jan. 6, 2021, insurrection — poised to reach a climactic point last Thursday — hurt her with the party faithful back home,’ Dionne Jr. said.

The polling revealed Cheney may have politically miscalculated by obsessing over Trump, a political figure who is popular in Wyoming. In 2020, Trump won the Cowboy State, receiving nearly 70 percent of the vote. Fifty-four percent of voters are less likely to support Cheney after her tangling with Trump on the committee.

‘Whether or not their efforts sustain Cheney,’ Dionne Jr. said of Democrats, ‘they would send a message for November: that the threat to democracy is the most important issue on the ballot.’

Ah yes, the old “threat to democracy ploy.”  More on that shortly.

In the meantime, things are looking up for Harriett Hageman:

Trump-endorsed Harriet Hageman has broken her campaign fundraising record in the second quarter heading into the August 16 primary against Rep. Liz Cheney (R-WY).

Hageman raised $1.8 million in campaign donations in 2022, surpassing her previous fundraising record of $1.3 million in the first quarter, the Casper Star Tribune reported.

With $1.4 million cash on hand, Hageman has raised a total of $4 million since she launched her campaign in September.

It seems it helps if one actually lives and campaigns in the state they claim to want to represent.

Local voters have taken notice of Cheney’s absence. ‘She doesn’t live here, for starters. She doesn’t really represent us,’ Sally O’Brien told Yahoo News of Cheney. ‘She says she’s a constitutionalist, but she doesn’t believe in justice for all, only for the Jan. 6 people.’

By that she means only those persecuting Normal Americans arrested for being present at the Capital on January 6.  How bad are things looking for Cheney?  This bad:

‘The big story is Liz Cheney is going to get beat,’ Coker reflected on a primary poll released Friday. ‘That’s a foregone conclusion.’

Friday’s Casper Star-Tribune/Mason-Dixon poll revealed Hageman leads Cheney by 22 points (52 to 30 percent). Eleven percent are undecided. According to previous polling, Hageman is leading in the polls by 28 and 30 points.

I keep telling them that, but they won’t listen.  Not everything in the world or politics is about Donald Trump, even in Wyoming. 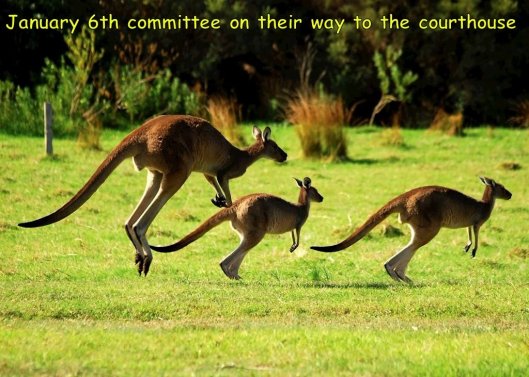 Cheney, whose approval rating was found to be 27 percent among Wyoming voters, has participated in Rep. Nancy Pelosi’s (D-CA) partisan January 6 Committee. ‘[T]he poll found 54% of voters were less likely to support her because she’s part of the panel investigating the attack on the Capitol.’

‘Once a politician gets to a certain point, there’s a point of no return,’ Coker added.

Voters have been unhappy with Cheney’s involvement in the partisan committee. Former Cheney donor, Nancy Donovan, who has given more than $35,000 to Cheney’s past campaigns, is now questioning Cheney’s mental state.

‘I sit there watching the January 6 hearings and I think: ‘Have you lost your mind?’ she told the Financial Times. ‘This man [Trump] has every major institution going after him, from the media to the swamp in Washington, DC, and now to have one of his own party do the same thing?’

In an interview with the New York Times, Cheney alleged her alliance with Democrats on the partisan January 6 commission to attack Trump is not political but rather educational.

‘Educational.’  Of course it is.

Dean Finnerty, a rancher from Wheatland competing in the steer wrestling competition, was not moved.

‘I tell you what: I voted for Cheney when she ran last time and I won’t vote for her ever again,’ Finnerty said. ‘I don’t know if she’s representing the conservative Americans that voted her in.’

Even her supporters damn her with faint praise, but try to think positively:

‘She knew that she was shooting herself in the foot politically (in Wyoming) and she was going to walk around with a limp for the rest of her life,’ Landon Brown, a Wyoming state representative and Cheney ally, said of Cheney’s unwavering Trump criticism. ‘But I could see this blossoming into something larger.’

Brown is referring to President Cheney, 2024.  And finally, finally at long last, we learn why Cheney is avoiding Wyoming like the plague:

And while her allies may be optimistic about her long-term future, Cheney would certainly like to avoid a blowout loss next month in her home state.

Facing consistent and credible death threats, she has been forced to abandon traditional retail campaigning, trading public rallies and town halls for private events where her presence is often revealed to the public only after their conclusion, if at all.

So that’s why she’s only been to places like Jackson Hole, where she charged admission to be in her presence.

‘We need more principled leaders like Liz to ensure that those who want our democracy to fail don’t succeed,’ Kinzinger told AP. ‘There has never been more urgency for pro-democracy voters to participate in primary elections.’

There is no one more principled than her pseudo-Republican companion on the J6 Committee, Adam Kinzinger, a man so principled he’s “retiring” from Congress rather than face the kind of defeat soon to be doled out to Cheney.

‘I do know that Liz absolutely wants to be out across the state meeting with all our residents,’ said Paul Ulrich, a former chairman of the Petroleum Association of Wyoming and a Cheney supporter. ‘It’s painful for her to have these security concerns. It’s disgusting that it’s come to this.’

Uh-huh, and we’re hearing about this only a few weeks before the Wyoming primary because? In any case, Cheney seems to be bearing up well under the pain of her absence from Wyoming.

Liz Cheney was born in Wisconsin, and lives in Virginia.  Politicians campaign in person every day, death threats or not. Cheney has been running a TV commercial featuring a very elderly former Senator Alan Simpson asking people to vote for Cheney.  Simpson was much appreciated during his senate days.  I doubt that ad is going to make him appreciated these days.

I also suspect few in Wyoming buy that nonsense any more than they buy her pretense of nobly upholding the Constitution.  You’ll notice, gentle readers, she, Kinzinger and the rest of the D/S/C establishment never talk about our Republic, but about “our democracy.”  They do this on purpose.

A democracy allows the tyranny of the majority, where 50.000001 % get to do whatever they want, including depriving the minority of fundamental liberties, and ensuring they are never voted out of office.  Our Constitutional republic doesn’t allow that.  Go here for a more detailed explanation of exactly why Cheney and the D/S/Cs that surely think her a useful idiot use this specific terminology.

On August 16, Mrs. Manor and I will be voting a bit more against Cheney than we’ll be voting for Hageman, but not because Hageman isn’t a worthy and far superior candidate.  Cheney has worked hard to convince me, and most of Wyoming, she’s all for “our democracy.”  The problem for her is, Wyoming is for our constitutional republic.

To find every article in this series, enter “liz cheney” into the SMM home page search bar.