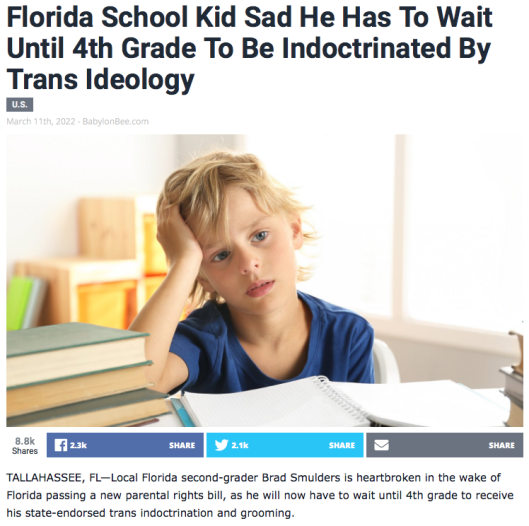 The Biden administration is requiring schools to comply with its LGBT policies or lose billions in federal funding for school lunches.

The U.S. Department of Agriculture’s Food and Nutrition Service announced in May it will prevent low-income students from participating in its National School Lunch Program if their public school does not adopt the administration’s interpretation of Title IX, which holds that the federal civil rights law’s provision against discrimination based on sex includes designations of sexual orientation and gender identity. The move was originally reported by The Center Square.

My God.  What sort of monster even thinks of such a thing, let alone makes it government policy?

Gov. Ron DeSantis of Florida is also fighting back:

‘In Florida, we are fighting against Biden’s intentionally destructive policies like denying school lunches for states that refuse to implement woke gender ideology in the schools,’ DeSantis said, referencing a portion of a speech he delivered last week, walking Floridians through the state’s ‘Freedom First Budget’:

‘We’re prepared for what Biden throws our way,’ he said during the speech.

‘And you know, yes, part of it’s the inflation and the gas, part of it are intentionally destructive policies, like trying to deny school lunch programs for states that don’t do transgender ideology in the schools,’ he continued.

‘I mean, give me a break. Totally off his rocker to be doing that. We’re fighting on that. Don’t worry. So we’re just prepared to be able to defend the taxpayers and the hardworking people in the state of Florida, and I couldn’t be prouder for doing that,’ DeSantis added.

The Department of Agriculture published this on May 5, 2022: 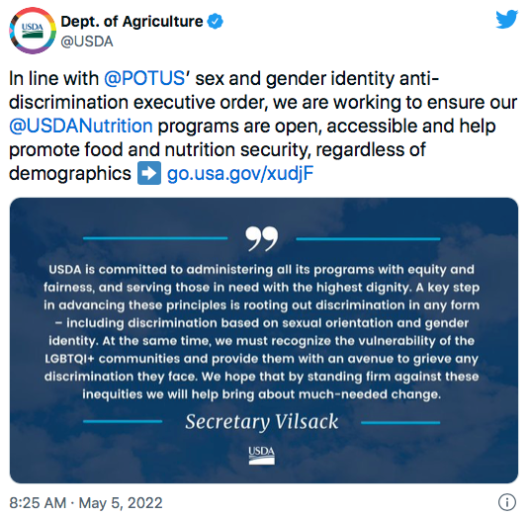 The U.S. Department of Agriculture’s (USDA) Food and Nutrition Service (FNS) announced today that it will interpret the prohibition on discrimination based on sex found in Title IX of the Education Amendments of 1972, and in the Food and Nutrition Act of 2008, as amended, Supplemental Nutrition Assistance Program (SNAP), formerly the Food Stamp Program (7 USC § 2011 et seq.), to include discrimination based on sexual orientation and gender identity. Under the leadership of the Biden-Harris Administration, USDA and FNS are issuing this interpretation to help ensure its programs are open, accessible and help promote food and nutrition security, regardless of demographics.

None of these acts in any way denied food to children based on gender, race, religious affiliation or anything else.  They were enacted to feed children, regardless of their ability to pay.  They were race and gender neutral.  They were American.  The Biden Meat Puppet Marxists are making this up, “interpreting” those acts to mean things they don’t say and were never intended to say.  For example:

Secretary of Agriculture Tom Vilsack was pleased by the decision to threaten to tie acceptance of the radical left’s gender ideology to funding school lunches.

‘USDA is committed to administering all its programs with equity and fairness, and serving those in need with the highest dignity,’ Vilsack said. ‘A key step in advancing these principles is rooting out discrimination in any form – including discrimination based on sexual orientation and gender identity.’

So, accept their woke definition of “equity and fairness,” or we’ll starve your children, you racists, homophobes, transphobes and sexists!  Wyoming isn’t amused either.  This is an e-mail statement:

CHEYENNE – ‘As Wyoming’s Superintendent of Public Instruction, I wish to denounce in the strongest terms possible, the Biden Administration’s recent reinterpretation of the USDA’s Title IX funding to update its nondiscrimination policies and signage ‘to include prohibitions against discriminations based on gender identity and sexual orientation.’

‘Though unsurprising, it is nonetheless both disheartening and astounding that our federal government could become so cynical as to tie the school lunches of little kids to its ever-relentless agenda of social engineering.’

‘Arrogance and disrespect are usually two sides of the same coin – and here you have a generous supply of both. This is not about discrimination, it is about control and manipulation, it is about forcing post-modernist thinking on people who refuse to embrace the same, and it is about imposing a value system on the majority of Wyomingites who’s faith or common sense inform them differently. It is, on its face, an egregious, albeit subtle, form of discrimination in it’s own right.’

‘Federal overreach knows no bounds, and to hold our kids hostage in this manner is not only morally repugnant, but another breathtaking display of political ideology run amok.’

‘In any other world, this would be sized up for exactly what it is: extortion. I only hope that ‘We the People’ have the stomach to stand up to it, because it won’t stop until the people say ‘enough.’ If we don’t, we will be guilty of enabling an overbearing and oppressive federal government that is completely out of control.’

Never before in America has our government threatened to starve children to obtain political goals so unpopular they cannot be obtained legitimately through the legislative process.  Being accused of being un-American is nearly as common as being accused of being a racist, but if there is anything more deserving of the title than this, it’s hard to imagine what it might be.  Americans feed the world, alleviate starvation, they don’t threaten to cause it.  But then again, Americans don’t abandon our allies to their enemies, strand Americans behind enemy lines, and turn over tens of billions in the most advanced weapons to medieval Islamists.  There are many things Americans don’t do the Meat Puppet Administration has done and is doing.  After all, what’s starving millions of children when you’re already creating food shortages and runaway inflation that takes food of American’s tables?

This is nothing short of Stalinist.  The D/S/C media propaganda arm has had little or nothing to say about it.  One would think The New York Times learned from Walter Duranty who won a Pulitzer Prize for hiding Stalin’s murder through starvation of millions of Ukrainians, but being Marxist apparently means never having to say you’re sorry, or even pretending to be decent or human. 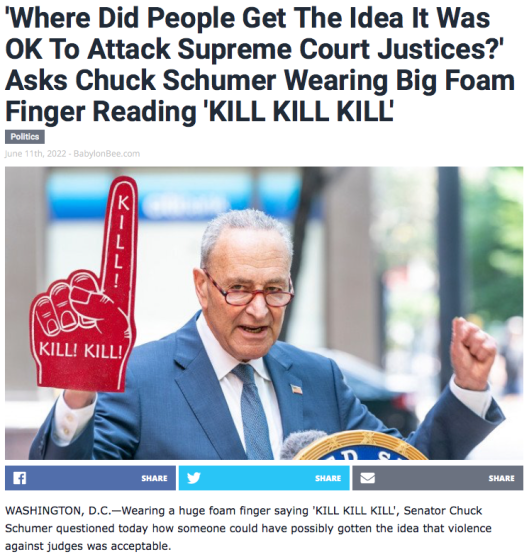 What more should we expect of Marxist monsters who publish the names, addresses, the churches and patterns of life of Supreme Court justices, encouraging their assassination that they may be replaced by Joe Biden?  What lines would such people draw, what would people without a conscience not do to get their way, to destroy individual liberty and gain absolute power over Americans?

Once the line of encouraging assassination of political enemies has been crossed, do they imagine that Genie can be put back in the bottle?  Are they so stupid, so arrogant, as to imagine their political enemies, the people whose children they would so happily starve, will play by the rules, the laws they have trampled?

I’ve often noted there are some lines sane people dare not cross.  When anyone threatens the families of Americans—as opposed to woke America haters—they are asking to become seriously dead.  Our self-imagined elite seem to think themselves invulnerable.  They know there is a two-tiered system of justice—they established it—which they think will protect them.  They think they can enact any political outrage, ignore and destroy the rule of law and the Constitution piece by piece and only find themselves more privileged and powerful.  They believe the Deplorables, the Ultra MAGA will meekly and quietly cower in the presence of their majesty and power, shrug their shoulders and say: “It’s the government; what can you do?”

If they continue to push, to demonstrate their hate for Americans, Americans will, at some point, no longer take it.  They will no longer resort to polite politics and ask for “conversations.”  They know policies like this are dreamed up by individuals and enforced by individuals.  They will directly visit those that hate them and would see them dead, the individuals responsible, not some nebulous, untouchable “government,” and ensure they can no longer harm them or their families.

It will not be, at least at first, an organized rebellion.  It will begin with individual Americans, people who know how to fight, how to preserve liberty, non-verbally explaining to the self-imagined elite they’ve crossed the line too many times, and they are no longer safe.  They never were, but Americans are polite people who believe in the rule of law, until the rule of law no longer exists, then, as they did on the frontier before the rule of law, they provide it themselves.

None of this has to happen.  Americans would prefer it never becomes necessary, but you don’t threaten to starve their children so mentally ill men can pee in women’s bathrooms, display their erect penises in women’s showers, deny female athletes the fruits of their labors, groom their children and rape girls in school bathrooms.

The Meat Puppet Administration refuses to arrest those breaking federal law in intimidating and threatening to murder Supreme Court Justices, while they surround themselves with armed security at taxpayer expense.  I do not advocate violence of any kind, but when these Stalinists, these monsters, these demons, threaten to starve children, they forget they’re threatening Americans.  If they keep pushing, they’ll discover their armed security will not be enough.