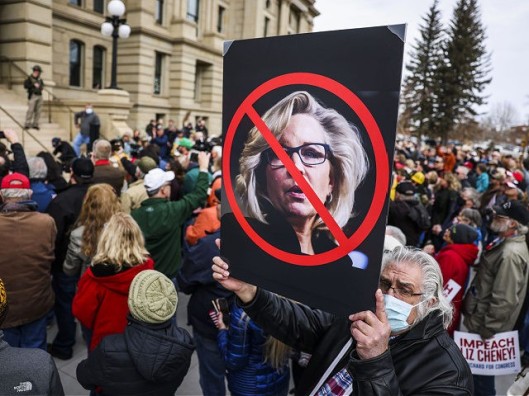 Were Liz Cheney actively trying to get herself thrown out of office in November, what would she be doing differently?

How, exactly, does Cheney differ from the most rabid congressional leftist?  Having lived in Wyoming most of my adult life, I can affirm I’ve never met, or even heard of, anyone espousing “white nationalism,” “white supremacy,” nor have I seen or heard the slightest bit of “anti-semitism.”  The demand, among D/S/Cs for the first two continues to far outstrip supply to the point the demand must be satisfied by rhetoric rather than evidence.  It is a matter of record anti-semitism’s home is on the D/S/C side, as the Biden meat puppet administration works tirelessly against Israel, fully supporting Israel’s, and our, most determined and deranged enemies.  I do agree with Cheney on one thing: we must renounce and reject D/S/Cs, and I suspect we’re going to in November.

If there were any further proof needed that Liz Cheney has lost her ability to effectively represent Wyoming, this should close the case. How in the world can she work with her colleagues in the Republican conference when she’s targeting its members, including the Republican leader? The media is reporting that even some of her Democrat colleagues realized how radical this idea would be. It is a true tragedy that Wyoming’s lone congresswoman is so deeply mired in the D.C. Swamp that she is now more extreme than some Democrats.

It’s clear that Cheney will go to any lengths to continue her personal war against President Trump, doing the political dirty work of Nancy Pelosi and the Democrats all the while. Republicans don’t want anything to do with her, and Democrats think she’s just a useful, temporary tool. She will never be able to be effective for Wyoming again.

Cheney is living proof of the accuracy of “the stupid party” brand for Republicans. D/S/Cs surely see Cheney as a useful idiot, and as soon as her usefulness ends, hopefully in August, none of them are going to be praising her in the D/S/C media, nor will they be returning her phone calls.  Marjorie Taylor Greene agrees:

…[Rep. Marjorie Taylor] Greene responded by saying: ‘Now the Dems make you tweet their divisive and dangerous lies, all so you can raise money from Democrat donors as you try to cling to your seat. And you actually comply. How pathetic.’

Adam Schiff, for the moment, is continuing to use useful idiot Cheney:

He added, ‘Liz Cheney is not the kind of person who leaks tapes and denies it. That is just not who she is. One thing this chapter of our history has revealed, and it’s something the historian Robert Carroll said, power doesn’t corrupt as much as it reveals. It doesn’t reveal us for our best but says who we are. Well, power revealed Liz Cheney to be a person of great courage and conviction.

No. She leaks tapes and gladly admits it.  That’s who she is.  Her “courage and conviction,” however, are focused entirely on attacking Donald Trump rather than serving the interests of Wyoming.  Until Merrick Garland, America’s most partisan, corrupt Attorney General, Barack Obama’s “wingman,” was Eric Holder.  He loves him some Liz Cheney:

Former Attorney General Eric Holder said Wednesday on MSNBC’s ‘Deadline’ that Rep. Liz Cheney (R-WY) has ‘guts’ and was doing the nation a service with her work on House Select Committee investigating the January 6, 2021 riot at the U.S. Capitol.

Holder said, ‘I think it’s extremely important to the extent that we are going to keep the amount of division that a potential indictment would actually generate. Having leaders of the party do the responsible thing, what they know in their heart to be the right thing, would go a long way to keeping the nation together.’

He added, ‘And boy, I tell you, the words of Liz Cheney and I don’t share a world view and agree on many issues, but she’s got guts. She’s got guts. She is doing a service to this nation the likes of which I’ve not seen for some time. Adam Kinzinger, who is right there with her, these are people who need to be. Again, I don’t share political views with them, but I have to give them their due, and there need to be more people like them.’

Uh-huh, and you’re welcome to them.  Cheney and Kinzinger will never again serve without running and being elected as Democrats. Signs of the times in Wyoming: 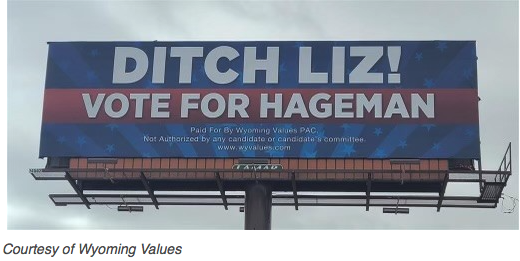 The billboards urge voters to ‘Ditch Liz! Vote for Hageman’ and appear in Casper, Rawlins, Cheyenne, and Laramie. The group, led by Republican strategists Andy Surabian and James Blair, plans to leave the billboards up until the state’s primary election day, or Tuesday, August 16.

Notably, far-left Rep. Adam Schiff (D-CA) has spoken highly of the so-called Republican,calling her a ‘person of great courage and conviction.’

Trump has spoken out sharply against ‘RINO’ Cheney time and time again, ultimately endorsing her challenger in September.

‘Unlike RINO Liz Cheney, Harriet is all in for America First. Harriet has my Complete and Total Endorsement in replacing the Democrats’ number one provider of sound bites, Liz Cheney,’ he wrote. ‘Make America Great Again!’

This week, Trump announced an upcoming rally with Hageman, taking place in Casper, Wyoming, on May 28.

To date, Trump endorsed candidates have a near perfect record of winning. Cheney is getting direct support from D/S/C media/donor organizations:

The agency’s name is People First but was previously known as ‘Main Street One,’ according to the agency CEO’s LinkedIn page. The agency’s website indicates it is affiliated with far-left Democrat organizations, such as President Biden’s campaign arm, Planned Parenthood, and Black Lives Matter.

Under the agency’s former name, the pro-leftist group has received disbursements of hundreds of thousands of dollars from radical organizations, Federal Election Commission records show. Among those organizations are ‘Biden for President’ and the Democratic Senatorial Campaign Committee. 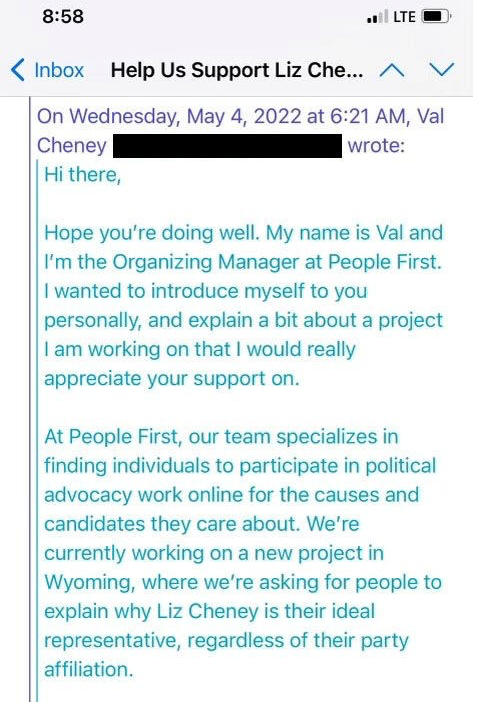 Cheney continues to get most of her campaign funding from out of state D/S/C sources.  This is why:

Donald Trump, as one might expect, isn’t fond of Cheney:

Former President Donald Trump has called Republican Rep. Liz Cheney of Wyoming ‘worse than any Democrat’ for her work as vice chair on the House select committee investigating the January 6, 2021, attack on the U.S. Capitol, The Washington Post reported on Tuesday.

Trump told the Post that congressmen and others with knowledge of the committee have told him that Cheney was the most aggressive member of the panel toward the former president.

The Federalist explains why Trump is right:

In a ‘WARNING from Liz Cheney’ sent out on Wednesday, the Congressional Black Caucus Political Action Committee solicited donations with an email highlighting Cheney’s persistent antagonism of former President Donald Trump and his supporters.

Cheney continues to do the dirty work of folks like the Congressional Black Caucus:

The committee investigating the Jan. 6, 2021, attack on the Capitol by a pro-Trump mob has subpoenaed five Republican members of Congress, including House Minority Leader Kevin McCarthy (Calif.), after they refused to cooperate with the panel’s inquiry.

Notice this line? The subpoenas were issued ‘after they refused to cooperate with the panel’s inquiry.’

Every single member of this committee, both Democrats and the two Trump-hating Republicans, Wyoming’s Liz Cheney and Adam Kinzinger of Illinois, are participating in a corrupt process designed to produce a Stalin-style show trial with the outcome already arranged.

That outcome is to charge former President Donald Trump with ‘inciting’ an ‘insurrection’ on January 6. And to prosecute him if possible. (skip)

As my colleague Melissa Mackenzie has correctly noted of the January 6 committee:

D/S/Cs are getting desperate.  I suspect they’ll try to have Trump indicted as an October surprise to try to distract voters from the horrors of their policies. The execrable Merrick Garland would surely oblige, and Liz Cheney is doing more than her part to help.

As I’ve previously reported—enter “liz cheney” in the SMM home page search bar to find all previous articles—Cheney is avoiding Wyoming like the plague.  One of her exceedingly rare Wyoming appearances occurred in mid-March in Jackson Hole, which is much like Austin in Texas: an island of loony leftism surrounded by a sea of Normal Americans.  At that event, she actually charged Wyomingites admission!  We pay her salary, and she charged for the rare privilege of standing in her shining presence.  But that’s OK because she showed that “great courage and conviction by meeting with reporters and refusing to meet with Wyomingites, calling them “crazies.” 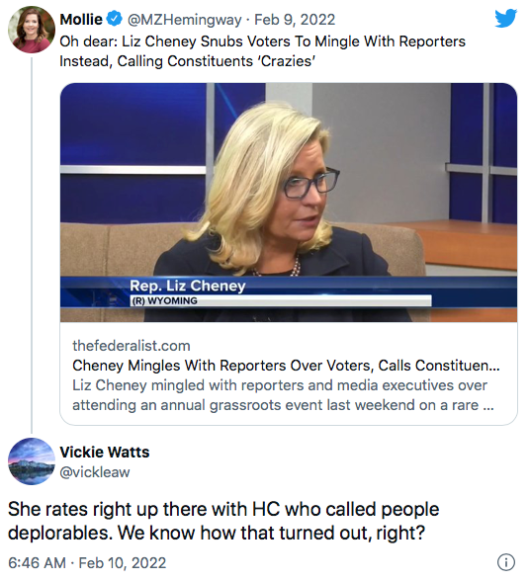 Cheney has, for years, refused to respond to questions and invitations from the Wyoming Republican Party, and more recently, refused to attend the early May GOP Convention, claiming the head of the Party is an Oath Keeper, who attended the events of January 6th, but was apparently never arrested.  Cheney has fully aligned herself with D/S/Cs who seek to criminalize free speech, free association and actual peaceful protest.

In the meantime, Hageman makes repeat appearances at pretty much every city and town across Wyoming, she actually appears to like people from Wyoming—she lives there–and she doesn’t charge admission. 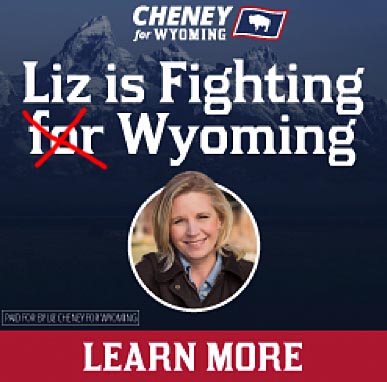 Cheney is certainly fighting Wyoming, and at the primary election on August 16, Wyomingites appear more than ready to fight back.