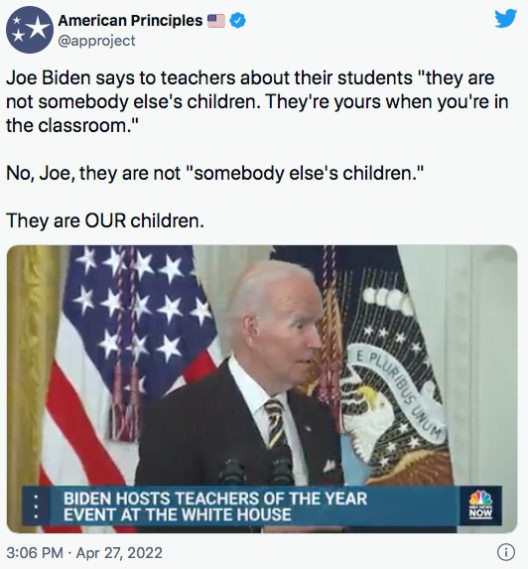 Let’s keep in mind, gentle readers, one thing as we embark on this article: Joe Biden has the title, but not the power.  He’s a nearly mummified meat puppet, and is not remotely running this country.  Who is?  Some cabal of Obamite socialists/communists running sort of under the radar under cover of the Democrat Party, which is why I refer to them with the acronym “D/S/Cs.”  For convenience, I’ll continue to refer to Joe Biden as POTUS, but you understand he’s only an increasingly mentally deficient figurehead.

Remember how well it worked for Terry McAuliffe when he said, and doubled down on, the idea parents had no business having any say in what happens in classrooms, and any business knowing?  He lost Virginia.  Virginia, the next door bedroom of DC.  Things aren’t going so well in Virginia these days for D/S/C educrats who harbor that misconception, nor are they going well elsewhere in the country, even San Francisco(?!), where three crazed D/S/Cs were booted from the school board in a recall election.

So it only makes sense Joe Biden would double down on stupid, as Mary Margaret Olohan reports at The Daily Wire:

President Joe Biden repeatedly told teachers gathered at the White House that school children are ‘like yours when they’re in the classroom.’

The president spoke at a Teacher of the Year event held Wednesday where he urged teachers to help students ‘gain confidence enough to know what they can do.’

‘They’re not someone else’s children, they’re our children,’ he said. ‘And they are the kite strings that literally lift our national ambitions aloft. … Think about it. If you got to do one thing to make sure the nation succeeded in the next two generations, what would you do? I would say, literally, have the best-educated public in the world.’

One might read that paragraph as an admonition to Americans to consider it their business to ensure we have the best-educated public in the world.  One might, if Biden didn’t say this:

‘You have heard me say it many times about our children, but it is true, they’re all our children. And the reason you are the teachers of the year is because you recognize that,’ he said. ‘They’re not somebody else’s children. They’re like yours when they’re in the classroom[emphasis mine].’

Don’t get me started on “teacher of the year” awards.  It’s been my experience many, if not most, of the people chosen for such things are not the best teachers, but the people best at currying favor and slavishly following and cheerleading for whatever faux-“transformative” fad administrators and politicians are pushing at the moment.  That’s a topic for another article.  Back to Biden:

‘Teaching is one of the hardest jobs in this country,’ Biden said. ‘Today, there are too many politicians trying to score political points trying to ban books — even math books. I mean, did you ever think … that when you’d be teaching you’d be worrying about book burnings and banning books? All because it doesn’t fit somebody’s political agenda.’ 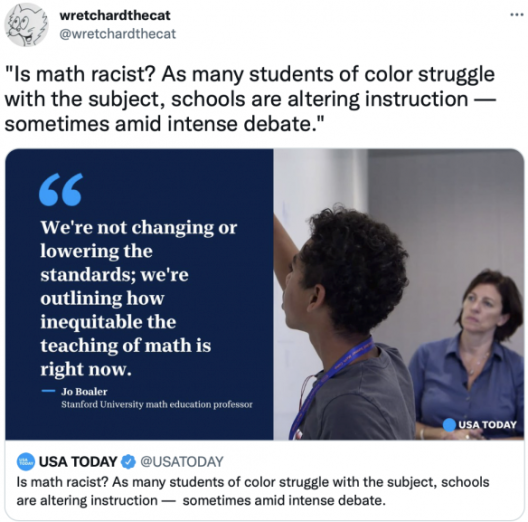 And who among Normal Americans—that includes people of all political persuasions, by the way—is symbolically or actually burning books?  Joe seems to have difficulty with definitions as well as pretty much everything else.  Refusing to choose a math book based on the premise America, and math, is racist is not at all banning it.  Refusing to choose woke and perverse indoctrination screeds over educational texts isn’t instituting bans, nor is it combustible.  It’s free enterprise and the exercise of free speech and professional judgment.  It’s choosing professional curriculum over sexual/political/racist propaganda.

‘American teachers have dedicated their lives to teaching our children and lifting them up,’ he continued. ‘We ought to stop making them a target of the culture wars. That’s where this is going.’ 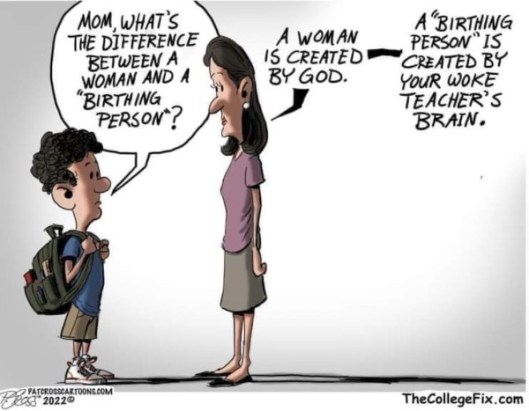 Normal Americans entirely agree.  They want teachers to professionally teach their disciplines, and fully support them when they do.  “Culture wars” occur when “teachers” prefer to engage in political, racial and sexual indoctrination rather than teaching.  They worsen when teachers and administrators buy Biden’s Marxist agitprop asserting children have no connection to their parents and parents have no rights to assert against that indoctrination.

Schools operate under the doctrine of in loco parentis—in the place of the parents.  The Legal dictionary notes:

Taking root in colonial American schools, in local parentis was an idea derived from English Common Law.  The colonists borrowed it from the English ideal of schools having not only educational but also moral responsibility for students.  The idea especially suited the puritanical values of the colonists, and after the American Revolution, it persisted in elementary and high schools, colleges, and universities.  The judiciary respected it: like their English counterparts, U.S. courts in the nineteenth century were unwilling to interfere when students brought grievances, particularly in the area of rules, discipline and expulsion.

No, you so unprofessional and evil

There has been substantial jurisprudence on this issue in recent years, but in brief, when parents send their kids to school, they have a legal, to say nothing of moral, obligation to keep them safe and to professionally educate them.  In that process, schools are expected to maintain a safe educational environment, uphold community standards in inculcating the qualities and values necessary for individual success and the maintenance of our constitutional republic, and for discipline and guidance not in excess of what reasonable parents would impose.

This is a temporary grant of parental authority, extending only when kids are in school or at school sponsored events.  It does not supercede parental authority at any time.  In most American states and cities the law is clear: parental rights may be removed only with due process of law, and the burden is heavily on the states to prove it should be removed.  The assumption is absent gross misconduct and provable danger, children belong with their parents.  Children do not belong to teachers or other school authorities—ever.  Of course I am not speaking of the legal obligation of teachers and other school staff to report child abuse or neglect.

Ian Prior, the executive director of political action committee Fight for Schools and a senior adviser at America First Legal , called the president’s comments ‘appalling’ and compared them to an infamous 2021 comment by former Virginia gubernatorial candidate Terry McAuliffe in which the candidate said he didn’t ‘think parents should be telling schools what they should teach.’

‘It is absolutely appalling that the President of the United States would effectively claim that the constitutional rights of parents to raise their children end at the schoolhouse door,’ Prior said in a statement to the Washington Examiner. ‘It’s frightening that Joe Biden is taking his talking points from failed gubernatorial candidate Terry McAuliffe and [American Federation of Teachers] President Randi Weingarten, but at least parents now know exactly where he stands — against them and their fundamental liberty right to make decisions on the education and upbringing of their children.’

Is this were Joe Biden stands?  Who knows? He probably doesn’t, but it’s absolutely in line with the Marxist, totalitarian policies of his Administration/handlers.  Schools—teachers—have strictly limited roles.  It’s a topic I most recently addressed in Woke Education: Crossing Dangerous Lines, and Sex In School: Boundary Violations.  By all means, take the links and read those articles.

By American tradition and law, all arms of government exist only with the consent of the people.  This includes public schools.  Local communities vote for school boards, who hire superintendents and similar administrators, who hire principals, who hire teachers and other staff, public employees all, who work in buildings provided by public tax money and whose salaries and benefits come from the same source.  As the Marxists of the San Francisco School Board recently discovered to their horror, the public has the power to take back every watt of the power they loan to school board members, and every other public school employee. What compassion; what tolerance…

Parents have every right—citizens have rights; government has powers—to know exactly what is being taught every day in the classrooms they build and maintain.  Schools have no power to deny them that knowledge, and when they obfuscate, refuse FOIA requests, refuse to respond and insult, even try to sue parents, they are completely illegitimate and demonstrate their unfitness for positions of public trust.

What kind of person should be teaching?  In January, I wrote Teaching: A Model? which asked you, gentle readers, to judge whether the teacher I was is the kind of teacher we need in our schools.  I began that article thus:

Who, exactly, do we want in the classroom?  Who should be teaching our kids, and who shouldn’t?  If we’re not asking that question as 2022 begins, we’re either asleep or tremendously apathetic.  The answer matters, not only to people with school-age children, but to our ultimate survival as a free nation, because public education was always intended to produce citizens believing in the principles of the Founders, people who could and would live together, produce and prosper.

It’s not too late to save public education, but in much of America, we’re not even fighting the battle.

It’s a battle—a war—into which Biden and his handlers have inexorably drawn us.  Normal Americans expect their schools to be professional, and would be more than happy to live their lives secure in that knowledge, but D/S/Cs-wokesters have made that impossible.  They awakened a sleeping giant and filled him with a terrible resolve, and they’re telling those who think all your children are belong to us just how grievously wrong they are.

Some D/S/Cs are mentally ill.  They’re focused on sexualizing children because they’re pedophiles, or gay or trans, know they’re a tiny portion of the population and want to convert as many children as they can.  But the rest, those with power and wealth, are following the Marxist model.  They’re doing it on purpose.  They know the harm they’ll cause and they’re more than willing for you to experience it.  Their wealth and power insulates them from the laws and cultural damage they intend to cause.  They know if they can capture children as young as possible, confuse them, alienate them from the families, from faith, from country, they likely have them for life.  Anyone who has studied history knows this to be true.

The only question remaining is how much they’re going to force Normal Americans to hurt them.

6 thoughts on “Biden: All Your Children Are Belong To Us”