On April 5, 2022, Barack Obama visited the White House.  In so doing, he exposed, in tragic terms, the utter fecklessness of Joe Biden.  The header photo shows Biden–the President of the United States in the White House–being completely ignored by everyone present, including Kamala Harris, as they drooled all over Obama.

This photo shows Biden helplessly trying to get the attention of his best buddy Barack.  Despite Biden putting his hand on Obama’s shoulder, repeatedly calling out to him, and leaving his hand there for an excruciatingly long time, Obama, and everyone else, including the hapless Kamala Harris, ignored him. Go here to see the brief videos from which each of these photos was taken.  One would need a heart of stone not to feel pity—and horror.

My feelings about Joe Biden go beyond a lack of respect, yet are tinged with great sadness and disgust. Sadness, because he is so obviously suffering from some sort of dementia, which is so obviously rapidly worsening.  Disgust, because his handlers, and his family, knew that, yet they allowed him to run for president, rigged the election to get him into the White House, and have run him as a mummified meat puppet since.  This is cruelty on an international scale, elder abuse. 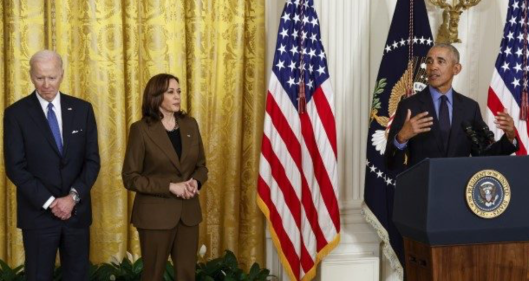 Supposedly, Obama was invited to brag about the wonders of Obamacare–dishonestly passed in 2010 and kept alive by the contemptible John McCain–so desperate is Biden to have anything positive to say about his term thus far.  During his patting-himself-on-the-back speech, Obama referred to himself no fewer than 33 times.  He also called Biden “vice-president,” provoking laughter, and then pretended it was a joke everybody was in on.  Sure, because he’s just that kind of self-effacing, humble guy.  Here’s the later, approved narrative version of best buddies forever:

Did we, however, see the real President of the United States on April 5, the real POTUS asserting himself for the public to see, rubbing their deplorable noses in it?  Not Joe Biden, but Barack Obama, the man behind the curtain about who were are supposed to pay no attention?  Biden’s staff and cabinet are, for the most part, Obama retread loyalists.  The videos clearly reveal who the White House staff and other self-imagined elite think is POTUS, and it’s not Joe Biden.

I’ve often referred to Biden’s election as the greatest bait and switch scam every perpetrated.  I initially thought Biden would stay in office only long enough for appearance sake, to be replaced by Kamala, I-can’t-pronounce-my-own-first-name, Harris.  Perhaps that was the plan, until it became horrifyingly obvious Kamala was a 5 year-old trying to play in the major leagues.  In less than a year she earned the dubious title of the worst VP in history with approval ratings even lower—by a considerable margin—than Biden’s, and that’s some feat.

I’ve always thought Biden’s handlers would somehow shoehorn Michelle Obama into the White House, but given the Constitution—which they see as a mere annoyance—and its specific order of succession, how to do that?  As I’m sure you know, gentle readers, all the cool kids have turned on Biden, and have suddenly discovered The New York Post was right: Hunter Biden’s laptop is the real deal, and so are its contents.  To be sure, they have not yet begun to report the real meat of the story, but they’re, to extend another sports metaphor, in the starting blocks waiting for the gun.  There is now considerable talk/leaks about Biden being removed via the 25th Amendment, or stepping down to spend more time with his family, perhaps even an admission of his lack of mental fortitude.

That would leave Kamala Harris in charge—shudder.  But why not?  She’s just another meat puppet, though not nearly as desiccated as Biden.  She can butcher a teleprompter reading as badly as Joe, and is even worse when she goes off-script, which according to her own constantly fleeing staff, she refuses to read or study, so she’s more than qualified, and she has only a bit more than two years to run.  That, you see, is how they get Michelle Obama in: Vice President Obama.

What’s that you say?  There has to be someone else!  Yeah, who exactly?  Pete Buttigieg?  Jennifer Granholm?  Elizabeth Warren?  Chuck Schumer?  Nancy Pelosi, who is every bit as senile as Joe Biden?  D/S/Cs don’t exactly have a deep bench, and every one of the “pick me!” cardboard cutouts that ran against Biden are no better or more acceptable to the public.  Any one of them would ensure an electoral rout in 2024, a rout so big no amount of cheating could overcome it.  Maybe.  I expect the cheating in 2022 and 2024 to surpass even 2020.

But Michelle, ah, there’s the solution, at least to the way of thinking of D/S/Cs.  She’d be a shoe-in, why, she’d be—dare I say it?—historic!  The first pseudo-female, black president.  Yes, I know they can’t define what a woman is, but they’d continue to ignore that while touting the historic nature of their latest meat puppet, and they’d have the fourth Obama term, perhaps even the fifth!

Contemplate that, gentle readers, but not unless your blood pressure medication prescription is filled.

The immediate horror of it all is the utter disaster D/S/Cs have foisted on America and the world in Joe Biden.  In just over a year, everything he has touched has, as Donald Trump would put it, turned to shit.  If our enemies, and our “allies” who do not wish us well were not convinced America is no longer to be respected, feared, or even consulted, after seeing the video of Joe Biden wandering, ignored and confused in the White House while Obama ostentatiously works the crowd, they surely are now.  If they weren’t ready to drop the dollar as the world’s reserve currency before, they are now, and if you think our current inflation is bad, wait until that happens.  Obama Energy Secretary Chu wanted American gas prices to be as high as European prices–$10 bucks a gallon or more—and if that happens, we’ll see that, and much worse.

The worst part is the economic and other horrors D/S/Cs have caused aren’t by accident or sheer incompetence.  They’re doing it on purpose.

One can only hope Americans see beyond Joe Biden’s low and dropping approval ratings.  One can hope they see why they disapprove of Joe Biden, which is to say, it’s not Joe Biden, it’s the entire D/S/C Party and pretty much everyone in it.  They’re the party of pedophilia, of grooming children, of exalting trans mental illness, of crime, drugs, unchecked illegal immigration, of anti-Semitism, of runaway inflation, of ruinous taxation, of ignoring and destroying the Constitution, of eliminating parent’s rights, of disarming the law-abiding, of censorship, of destroying our major cities, of racism, and so much more.  It’s necessary, if America is to survive, and if the world is to have a chance for peace, none of them hold high office, ever again.

Am I exaggerating?  They’ve had their chance at absolute power, and they’ve more than proved the axiom: power corrupts; absolutely power corrupts absolutely.  They’ve dropped any pretense at concealing their ultimate, totalitarian goals, and they’ve been giving it to us, good and hard.  We know exactly what they are and what they do when they have power; no one has to speculate any longer.

Now we have to decide, in 2022 and 2024, is America still a constitutional republic, or are we “transitioning” to a socialist/communist utopia?  Are we still so stupid as to fall for the bait and switch—they’re counting on that—or have we wised up?  Will we preserve America, only to forget and make the same mistakes after a single generation and lose it all, or will we see a new birth of government of the people, by the people and for the people?