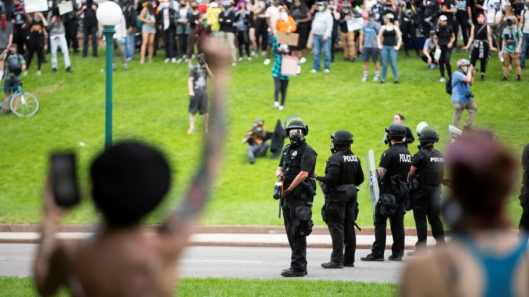 I’m taking another week off from education writing to deal with this:

A Colorado jury on Friday awarded a $14 million judgment to 12 protesters after finding Denver police officers violated their constitutional rights amid chaotic demonstrations in 2020 over police brutality and racial injustice.

Jurors found Denver violated the First and Fourth Amendment rights of protesters, who claimed police officers injured them during the gatherings that were sparked by the death of George Floyd, the Denver Post reported. They heard testimony about the alleged failure of police to coordinate during the law enforcement response during the three-week civil trial.

The 12 plaintiffs were injured with bean bags and pepper-sprayed during several days of gatherings in downtown Denver. At the end of the trial, attorneys asked the jury to award $17.5 million in damages.

‘I think we established that when there are people committing acts of violence, what the police should do is take action against those people.  What you can’t do is take it out on the peaceful protesters,’ Tim Macdonald, attorney for seven plaintiffs, told Fox News. “The acts of violence against peaceful protesters by the police were so extensive, I think that’s what persuaded the jury.’

He added that the city never presented evidence or argued that the plaintiffs had acted violently.

If this is accurate, this is a major problem, not only for the Denver Police Department, but for police officers everywhere.

‘The Denver protests in the aftermath of George Floyd’s murder were unprecedented – the city had never seen that level of sustained violence and destruction before,’ the Denver Department of Public Safety said in a statement to Fox News. ‘We were prepared for a worst-case scenario, but we weren’t fully prepared for what transpired.’

The agency said it recognizes ‘some mistakes were made’ and that all officers have received additional training on crowd control response and rapid deployment tactics.

The Fox article provided no specific information about exactly what the police were alleged to have done.  The Greely Tribune did a bit better: 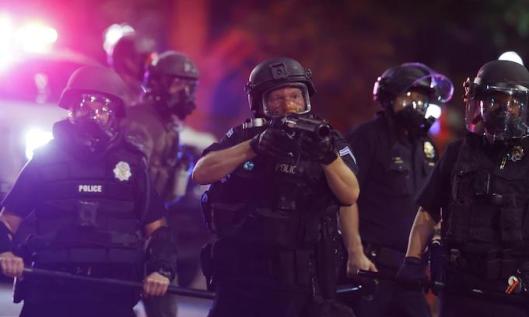 Attorneys for the protesters argued during trial that police officers violated the plaintiffs’ constitutional rights by shooting them with pepper balls and sponge rounds, and subjecting them to chemical munitions, even though the plaintiffs were protesting peacefully.

The city failed to properly train and supervise the officers, which led to the plaintiffs’ injuries, the attorneys said. The injuries included a skull fractured by a less-lethal projectile, pepper spray used on a protesters’ eyes at close range and bruises and cuts from other projectiles.

These were, I’m sure, “mostly peaceful” protesters.

‘You have the ability to send a message to the Denver Police Department and to departments across the country,’ Macdonald [rioter’s attorney] told the jury in his closing argument.

Attorneys for the city, however, argued that officers were responding to massive, unexpected and unprecedented demonstrations and used the less-lethal weapons to protect property and to deal with people in the crowd who were throwing projectiles at police. They urged the jury to consider the totality of the chaos.

Officers made mistakes during the chaotic protests, Lindsay Jordan, of the Denver City Attorney’s Office, said during her closing arguments Friday.

‘But mistakes do not equal constitutional violations,’ she said.

No, they don’t, and in terms of defending a civil suit, making that kind of admission is—oh, what’s the word?—stupid.  It convinces police officers, actually any sane person, the people defending the police agency are only going through the motions.  I’ve not been able to find any information in any article on this case about precisely what happened.  Why did any individual officer use any degree of force against any of the rioters?  What were the rioters doing when a given police officer used any specific force?  Was there video to back up the rioter’s claims?  We’ll likely never know, and that is dangerous.

The Denver riots were just that: riots, all of which are to this day called “mostly peaceful protests,” where dimwitted reporters stand before burning buildings and vacuously speak of the nobility and righteousness of “peaceful” protestors.  While it’s likely true many, perhaps even most, of the people there did not break the law, other than participating in a riot by their mere presence, which becomes a crime when they refuse to disperse, what this verdict—absent the specific information I’ve mentioned—does is further restrain the Denver Police, and police officers everywhere, from using any physical force, ever.

The verdict removes the benefit of the doubt.  Particularly in a riot, we must give police officers, who are often fighting for their lives, the benefit of the doubt when they use force.  When a screaming, raging mob rushes police officers, expecting them to carefully and particularly apply usual standards of probable cause before they’re overwhelmed and killed is a bridge too far.  Obviously, if a given officer uses unreasonable force against an innocent, ever, they should be held accountable, but riots make such determinations problematic at best.

People in a mob, anonymous in numbers, and particularly when they are masked to make identifying them impossible—thanks Covid warriors!—will do things, commit violent crimes, they would never do otherwise.  Police officers are taught this essential element of mob psychology.

When facing such “protests,” the police are always outnumbered, often a hundred to one or more.  Even two or more to one can easily be fatal.  The only advantage they have is training and the ability to use force to disperse mobs and keep the mob from committing all manner of crimes and injuring or killing them.  The police will make arrests, use force, only if they can be reasonably certain they won’t end up being arrested, prosecuted and fired for doing the jobs the public hires them to do.

I guarantee in every riot, every officer witnesses many felonies–some directed against them–but dares not make arrests.

For any police officer, mobs are extraordinarily dangerous.  Any attempt to make an arrest will commonly be met by the mob attacking the officers involved.  Officers are lawfully allowed to use whatever force is necessary in making an arrest, but unless they are allowed to use that force, they’re not going to try.  Why not?  Because often, their bosses order them to do nothing, and because if a criminal wants to push things to the point where officers have to use deadly force, officers have to be willing and able to go there too.  What American police officer these days can be secure in the knowledge if they lawfully use deadly force, they’ll be given the protection they deserve?

Were I a police officer trying to deal with any of the riots that have become common, I’d be an idiot to try to prevent looting, arson, carjackings and a variety of other crimes.  If a thug pushed it to deadly force, particularly if they were a member of a politically favored victim group, I would know I’d be toast.  So cities burn, after they’re appropriately looted, of course.

To read a compelling account of the dramatic decline of Seattle, as told by several former and current Seattle PD Officers, go here.  Seattle is one of the most obvious examples, but it’s happening around the country.

Lawsuits like this are only marginally about justice.  They’re mostly about money, and about disarming the police.  Not of firearms, although some social justice cracktivists have actually suggested that, but of the ability of the police to use force at all.  Reuters explains they’ve had great success:

The lawsuit, filed in June 2020, led a federal judge to issue a temporary injunction barring police in Denver from using tear gas, plastic bullets, flash-bang grenades and other ‘less-than-lethal’ force unless approved by a senior officer in response to specific acts of violence.

This is insane.  An officer in the middle of a riot has to call a higher-ranking officer by radio to ask him if he can use force against a thug who just threw a Molotov Cocktail at him as the thug disappears into the crowd. Violence occurs within seconds; we pay the police to make split second decisions.  Now, in Denver, every officer has to take minutes, even hours, to respond.  The judge removed virtually every alternative means of force officers have between struggling by hand and using deadly force.  There can be no reasonable conclusion other than this is exactly what D/S/C cracktivists want.

Why would officers in the thick of a mob have to call for permission after the fact of a crime?  High-ranking police officers drive desks, not patrol vehicles.  They are not going to subject themselves to the danger in which they place line officers, and fearing being included in lawsuits, they’re not going to give officers permission to use force.

The city has already implemented policy changes in the aftermath of the protests, the department said, including enhanced officer training for crowd management, eliminating the use of some ‘less-than-lethal’ weapons and new guidelines for the use of pepper spray.

This kind of lunacy all but totally disarms the police.  During a riot, they’re not going to go hands on trying to make an arrest because they’re going to get monkey piled by unidentifiable thugs who, even if they’re arrested, are never going to be prosecuted.  They dare not shoot anyone, because if they do, regardless of the facts, they’re going to be crucified, particularly if they shoot someone of the wrong race/gender/identification.

People sleep peaceably in their beds at night only because rough men stand ready to do violence on their behalf.

This verdict will have repercussions across the nation.  Thankfully, in much of Flyover Country, there have been no riots, or they’ve been efficiently stopped.  They’ve been primarily confined to larger cities in blue states, though some have worked their way into smaller cities in blue states.  In most red states, the police are allowed to do their jobs and given the benefit of the doubt, because the residents of those states live in and recognize reality, though that could change if D/S/Cs get their way.

Temporary President Biden has told us we’re going to have food shortages–too bad suckers!–and various D/S/Cs have told us it’s time to start eating lentils instead of meat, and to lower our expectations in general.  Inflation-caused gas prices, and soon to be shortages are bad enough.  When people can’t get enough—or anything–to eat, and the police aren’t allowed to uphold the rule of law, things are going to get very, very ugly, very very fast.

As I’ve so often written, we hire the police to do the nasty things we can’t or don’t want to do.  They wallow in the filth and cruelty with which we’d rather not deal.  They see the savagery and evil of which human beings are capable, and want to protect the public as much as possible, but unlike the Woke, they are rational people who deal with gritty reality every moment of every day. Convince them protecting the public will as likely as not to result in their dismissal, arrest, even prosecution, convince them they’ll be sued for lawfully, reasonably doing violence on behalf of the public, and they’ll do one of three things: (1) do as little as possible, and absolutely avoid any contact with the most prolific and violent criminals, particularly the “mostly peaceful protest” kind; (2) move to a free, sane state to serve and protect where it’s appreciated; (3) find another line of work.  If you haven’t taken the link to the Seattle article, no would be a good time.  You’ll see sane officers doing exactly as I’ve described.

In either case, crime will dramatically increase, and people will quickly discover unless they are willing to use violence against criminals, no one is going to sleep peaceably—ever again.  Trust me, gentle readers, though criminals would be dealt with quickly and finally, this is a state of affairs no sane person wants if our representative republic is to survive.