What passes for news these days…

I have often, in writing about firearms and general personal and family security issues told you, gentle readers, you’re on your own; you always have been.  This is so for these general, unchanging, reasons:

2) Most people would be shocked to learn how few police officers are on patrol in their community on a minute-by-minute basis.  Police agencies are always understaffed because personnel costs are around 90% of police budgets.  To put one officer on the street 24/7/365 requires the hiring of at least four officers.  Three for three 8-hour shifts and one to cover for vacations, illness, court, training, and other daily issues.  Those officers will not be independent patrolmen for about a year from their date of hire, and D/S/C ruled cities are having a hell of a time hiring anyone without a criminal record and an IQ larger than their belt size.

3) Major cities—most of which have been Democrat ruled for decades—are akin to third world war zones, and that was before Communist prosecutors took over and refused to prosecute criminals.  Police response time to 911 calls is like that of Detroit’s and Seattle’s: about an hour, if they can respond at all.  When someone is breaking into your home intent on mayhem and murder, the police may be able to get around to it in an hour or so.

4) Across the nation, homicides have increased 30% in 2020, the greatest increase in 60 years.  Let’s Go Brandon! Other violent crimes are up by similarly high rates.

5) In rural areas served by county Sheriff’s Departments, response time can be even longer, but only because of the very few deputies available and the very long distances they have to travel.  In bad weather, they may not be able to respond at all.

6) Most police officers are not gun-smart. Many citizens are superior to them in knowledge, ability, accuracy and tactical proficiency.  The officer responding to your call is likely barely able to qualify with their handgun, given generous passing scores, an easy course of fire, and as many attempts as they need to pass.

Sadly, circa October, 2021, in many places, police officers can no longer take any of this, and more, for granted.  They’re responding by doing as little as possible, retiring, transferring to police agencies in sane parts of the country—mostly red states—or simply leaving the profession entirely.

I have also, from time to time, written about police executives, normally county sheriffs, telling their citizens to arm themselves because they can’t, due to budget cuts and political interference, protect anyone, though to date, only a tiny number of police executives in America’s largest, most crime-ridden cities has admitted any such thing regardless of reality.  As regular readers know, the police have no legal obligation to protect any individual citizen, nor can they be successfully sued for failing to protect anyone.  Their only legal obligation is to deter crime by their presence and investigate crime after it has occurred.  In this, they are at least somewhat successful.  Criminals try very hard to avoid committing crimes in the presence of the police—or at least they used to.  And the police, depending on the place, may or may not have much success in solving various types of crime.  If they have little manpower because they’ve been defunded, so most remaining detectives are filling in on the street, or the most experienced officers are fleeing as from a pestilence, and there are no remotely qualified candidates to replace them, there will be little or no deterrence, and little or no case clearance.

It’s a new day in law enforcement, and a dark day indeed, as Fuzzy Slippers at Legal Insurrection reports the Seattle Police Chief has admitted the police can’t even protect themselves: 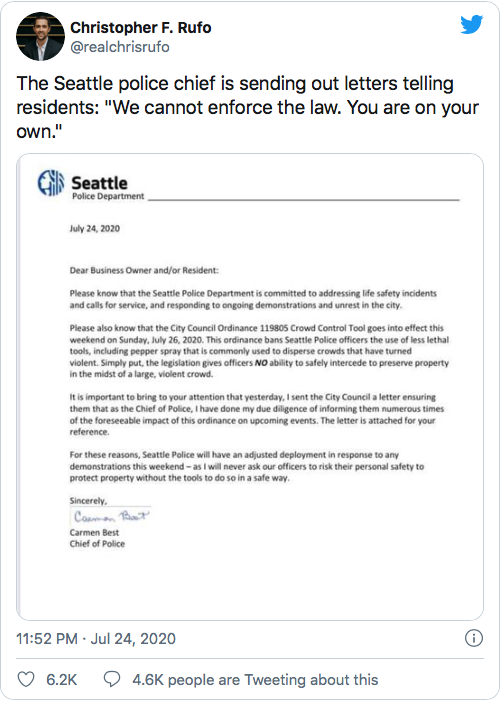 This letter is in response to the City Council’s banning of less lethal methods of crowd control and arrest, leaving officers essentially two options: (1) ask criminals pretty please to allow themselves to be arrested, (2) when they refuse, shoot them. Obviously, in places like Seattle, officers using any kind of lawful force are more likely to find themselves in jail than criminals, so the police have, reasonably and sanely, withdrawn and turned the streets over to actual anarchy.  A local judge, very temporarily in 2020, enjoined the enforcement of the then new law, but the point is clear, and the police have been emasculated.  It will be a very long time—if ever—before they are allowed to enforce the law again. 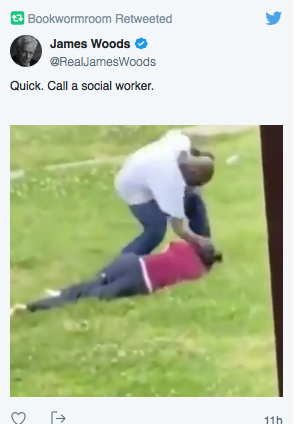 Consider this from the “summer of love” in 2020 in Portland from independent reporter Andy Ngo at The New York Post:

The daily riots function to drain the city of resources and to weaken the morale of law enforcement and public officials. It’s working.

Last month, [Police Chief] Wheeler disbanded the Gun Violence Reduction Unit, claiming it unfairly targeted blacks. In the weeks since, there has been a 380 percent increase in shootings compared with the same time frame last year.

City Councilwoman Jo Ann Hardesty has taken police hatred further. She told Marie Claire magazine this week: ‘I believe Portland Police [Bureau] is lying about the damage — or starting the fires themselves — so that they have justification for attacking community members.’ She partially walked back her accusation after Portland Police Chief Chuck Lovell, who is black, asked for evidence of her claim.

“Even before the protests started, we were dealing with a catastrophically short-staffed police bureau,’ says Daryl Turner, president of the Portland Police Association. Going back to 2016, city leaders and Antifa-sympathetic activists have worked to denounce police at every opportunity. The anti-police sentiment in the city has led to early retirements and a policing philosophy of ‘de-escalation’ where cops mostly stay away from riots. Just this year, the bureau has had three different police chiefs.

‘We’re at a point where none of us knows what to do,’ says a Portland police officer who asked to be unidentified. ‘Some are thinking we just need to give the vocal minority and the politicians what they want: We go away and let the city burn.’

The situation is no better in Portland in 2021.  “De-escalation” in D/S/C ruled cities means allowing D/S/C enforcers—and pretty much all other criminals-–to do whatever they want without consequences.  Things have not improved in Portland and Seattle.  Thus are citizens, including many black Americans, women, even D/S/Cs–many that have never owned a gun–buying guns and ammunition.  It’s a reasonable response to malicious stupidity on the part of D/S/C politicians.

That this lunacy is occurring across the nation is no coincidence.  It’s all part of American Marxism, as Mark Levin accurately characterizes it.  More specifically, it’s the Cloward-Piven strategy, named for two Marxist academics.  Politicians purposely destroy elements of society, making things so bad, citizens so desperate, they’re willing to accept whatever socialist/communist “solutions” Marxist politicians demand. 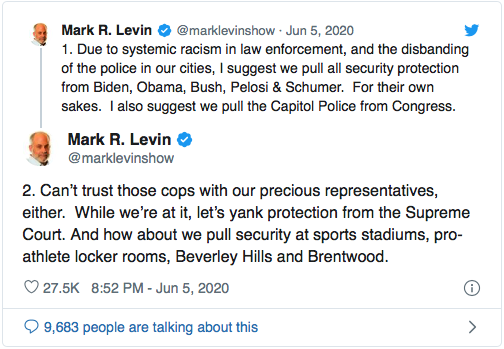 Police officers not allowed to enforce the law are little better than no police officers.  In some ways, they’re worse, because they will inevitably be turned into political police, punishing the political enemies of those in power.  If you think, gentle readers, we have a two-tiered system of justice now, you ain’t seen nothin’ yet.  The foundation for a communist system is being previewed and forged across the nation in blue cities and states.  Officers that will refuse to oppress fellow citizens will find other employment.  Those that remain have, to at least some degree, demonstrated their willingness to obey by being forced to take the Covid vaccine.  Some portion of them will be only too glad to abuse the unprecedented power they will be given, and due process will be a thing of the distant past.

Will there be vigilantism?  In some places it will become a necessity, just as it was before there was widespread, legitimate law enforcement.  What other choice will the honest have?  Neighbors will band together—they already are in many places—to protect their neighborhoods with force—that means guns, lots and lots of guns–and as things continue to deteriorate, due process will become a seldom-considered option. 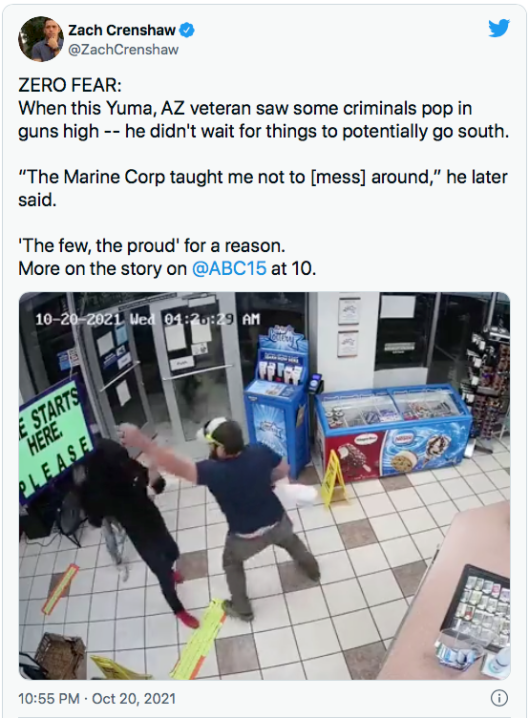 A former Marine stopping an armed robbery. It was in Yuma, AZ so he’s probably not going to be prosecuted…

During the transition period between the rule of law and total anarchy–residents of some blue cities and states are well into that period–particularly in blue states and cities with Soros prosecutors, or those who ascribe to the same Socialist/Communist ethic, lawfully protecting oneself and others will be as dangerous, if not more, than submitting to violent criminals.  In such places, the former Marine who thwarted an armed robbery would be far more likely to find himself jailed than the three criminals.

D/S/Cs tremble in horror at rural law enforcement officers who, investigating a homicide, laconically ask: “well, did he need killin’?”  They see such comments as evidence of witless rubes endorsing murder.  Actually, it’s just a direct way of asking whether a killing was lawfully justified.  Any competent police officer knows when a citizen lawfully shoots a criminal, they did, indeed, “need killin.”  In a society where the police are politically prevented from doing their jobs, where they are so financially crippled they barely exist, or where they are entirely abolished, a great many more criminals are going to “need killin’,” and tragically, far, far more mistakes in the use of force are going to be the rule rather than the exception.

It’s always wise to be careful about what you ask for—you might get it–but particularly in blue cites and states, where wisdom is in short supply.

If current trends continue or worsen—they’ve been worsening for more than a year now–this may be the future for all of America.  Having taken the White House, the House—by a very small majority—and functionally taken the Senate, they are trying to impose this future on the Blue states.  If they do, if they are able to once again rig the 2022 mid-term elections as they did the 2020 elections, the current insanity will seem tame by comparison.  For an interesting take on that possibility, see this 2018 article by Larry Correia.

Are Normal Americans going to give up their guns to people that actively hate them, that call them “insurrectionist,” “domestic terrorist,” seek to deny parents the right to monitor and determine the education their children receive, threaten them with the FBI, and ascribe the worst motives and behaviors to them?  They’re going to trust these people, who won’t protect their businesses, homes and lives against D/S/C Antifa/BLM shock troops and other criminals, not to turn even more totalitarian?  They’re supposed to believe people who have used a virus to rig elections, destroy the economy, deprive children of education, and who are now demanding people submit to vaccination or lose their jobs aren’t willing to go full Communist?

I’ve a little secret for the self-imagined elite: you’re not, and Normal Americans are smart indeed, much smarter about the kinds of issues necessary to individual and societal survival than you.

But, gentle readers, until this is all sorted out, and we find out whether we’re going to live under the rule of law or the tender mercies of the self-imagined elite, you’re on your own; You always have been.