The first book of the series

I reviewed the first three Kelly Turnbull novels by Kurt Schlichter in The Second Civil War 4: Kurt Schlichter Fiction.  As regular readers know, and I hope because they’ve read Schlichter’s first three books, the series is set in an America split into red and blue countries.  The Capitol of the red/free states is Dallas, TX.  The red states have not only retained the Constitution, but strengthened the individual liberties it acknowledges, as well as strengthened its limitations on government.  One notable addition is in order to vote, one must serve in the military, no exceptions.  The red states are known as the United States, and they are productive and prosperous, perhaps even more so than the old United States at its best.

The blue states are exactly what one would expect from the American version of Marxism: fiendishly woke, brutally politically correct, corrupt, falling apart, full of hunger, poverty, sickness and despair, apart from a small elite atop the socialist pyramid and the internal security forces that keep them in power by ruthlessly suppressing the peasants.  Every bit of woke insanity one can imagine has not only taken hold, but run amok, and the only law is the law of the gun in the hands of the ruler’s security forces.  The non-productive and non-prosperous People’s Republic of North America has been forced to ally with China.

To set the scene for this review of books 4-6, Schlichter provides this preface in Collapse, published in 2019:

People’s Republic takes place in the early 2030s, a decade after America splits apart in to red and blue.

Indian Country goes back to the mid 2020s a few years after the Split.

Wildfire takes place within a year after People’s Republic.

Collapse, other than the cold open, takes place after Wildfire.  The first chapter takes place in about 2030. 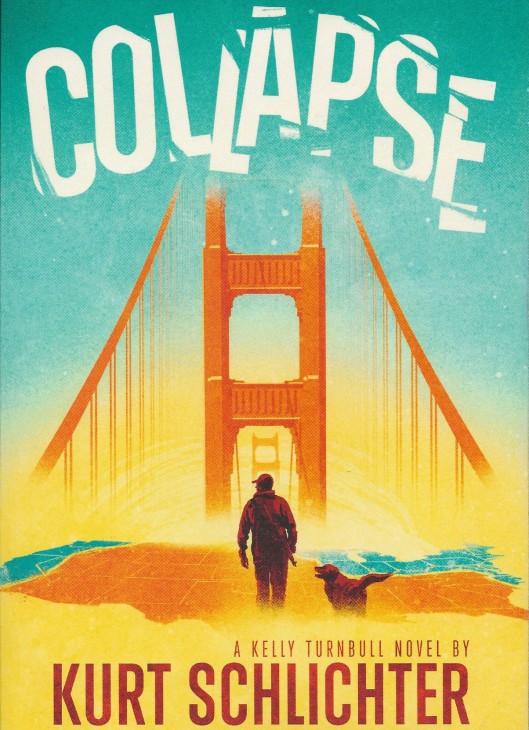 “Collapse” opens in Hawaii with protagonist Kelly Turnbull, Special Forces Captain transferred to blacker than black missions under the mysterious Clay Deeds.  Turnbull is a reluctant hero.  A master of soldier’s arts, he would rather just be left alone, but duty calls and he always answers.  In this, he is a classic American hero, not an everyman, but an exceptional man, a man able to do what most can’t or won’t, willing to subordinate his own immediate desires and welfare for the greater good.  A man unsure of dogs, he can’t help but rescue them too.  He’s no James Bond; he doesn’t bed every woman he meets.

Hawaii is under Chinese control, but they very much want tourist dollars as they plot to exert total control over the Pacific and the People’s Republic.  Turnbull is tasked with extracting the flaky son of a high ranking Chinese military defector whose information the United States very much needs.  Why do they need it?  Because The People’s Republic has allied with the Chinese, who are in the process of invading the west coast, beginning with San Francisco, which is the only harbor that will allow them to offload their men and equipment.

Turnbull succeeds, but is soon sent back to California—he’s from there and knows the territory—first to prevent an aircraft carrier The People’s Republic sold the Chinese from going into service, and then, unexpectedly, to stop the Chinese invasion. 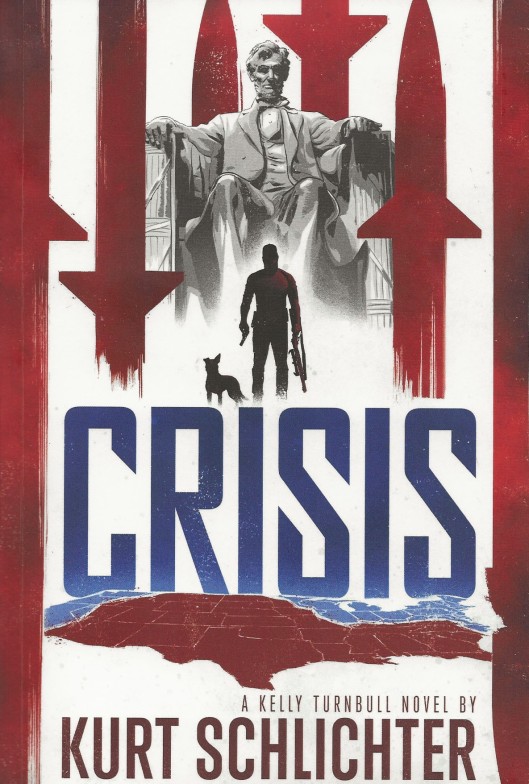 “Crisis,” published in 2020, is set in late 2022.  A hot Civil War has not yet broken out, but it seems inevitable.  Just as today, characters involved in trying to hold things together debate its morality and inevitability even as they struggle to stop evil forces from dismantling the Republic.

As Crisis opens, Clay Deeds tells Turnbull, who is still fighting in Iraq, he’s been killed in a tragic helicopter accident, and is returning to America in a last-ditch effort to hold things together.  He has a team of former Special Forces operators to help.

Schlichter uses contemporary reality and projects logical near future events.  Minnesota, which abolished the police, has become a haven for Marxist revolutionaries, whose militia is the defacto government.  The Marxist leader, a charismatic rich kid who likes to kill people to make examples, arranges the theft of an Air Force B-52 with a nuclear weapon aboard.  His goal? Blow up the conference that will amicably split the country, avoiding war, which he very much wants.  Turnbull, of course, saves the day—barely—but the bad guy gets away—until the next book?

Stealing a nuclear-armed B-52?  Does that sound impossible?  Schlichter, a retired infantry officer, uses advisors who know about such things.  In the world of a nation coming apart, it would be possible indeed, and Schlichter tells a compelling story.

Consider this from the Preface of The Split, published in 2021:

This series skips around mostly because my mind does.  The chronological sequence is:

Collapse told the story of how America might come back together, and Book No. 7 may well follow that one.  But I can’t think that far ahead.

“The Split” begins with Turnbull infiltrating Cuba to rescue notable Americans, among them Senator Ted Cruz and Donald Trump, Jr., who have been kidnapped and held in a secret Gitmo prison to stave off the American liberation of Cuba that is following on Turnbull’s heels.  The Turnbull series is full of action, with the kind of subplots Tom Clancy pioneered, but with far less digression, technobabble and page count.

In the main plot line, Turnbull must rescue a professor in Boston, because he has developed a computer program that allows its user to stealth manipulate the outcome of any election.  Along the way, he has to engage the services of Irish gang bank robbers and one of the only honest FBI agents left in the blue states.  He also gets the opportunity to kill his most vicious and dangerous opponent from Crisis in a most satisfying and appropriate way as he sends him straight to Hell.

Never Trumper and floundering publisher Bill Kristol calls the Turnbull series “appalling,” which is perhaps the best recommendation Schlichter could get. The series builds on the logical progression of contemporary woke culture, unrestrained by sanity or law.  The People’s Republic—PR–is a stereotypical socialist/communist hellhole.  Everything the people of places like California once had is, for most people, gone.  No food, no electricity, no fuel, no medicine, no toilet paper, no consumer goods.  There is, of course, an elite class who live more or less as Americans always have, but even they are not immune to the state, which rules with an iron hand.

As the Split became inevitable, honest police officers—almost all of them—fled the blue states for the red, and the PR established a People’s Security Force, a national police force–sound familiar?  They’re stupid thugs, not professional police officers, mostly criminals given old military handguns and AKs provided by China.  They steal, beat, kill, rape and harass people at will.  The People’s Bureau of Investigation—PBI—is a professional force with all the best—actually second best—equipment, but that’s because they are a domestic spy agency, tasked with keeping the people in line and reds—Americans—out.

Just as in contemporary China, people have privilege cards, and everyone below a 6 on a 10-point privilege scale, is free game for the PSF.  As the novels make clear, the people living in the PR have, mostly, come to accept the “struggle” against the racism, classism, sexism and every other “ism” of the United States.  Just as it was in the Soviet Union, and as it is in socialist/communist countries today, the state portrays free nations as cesspools of racism, hatred, starvation and oppression of all kinds, and people accept it, even as they are starving and oppressed themselves.  It’s all they’ve ever known.  Characters in the books are surprised at how fast previously free people can be brainwashed to forget all about freedom.  Even the few who know it’s all a lie have to speak the public line whenever anyone else might hear—informers are everywhere, and thought crime is punished more severely than actual crime, unless it’s against the State or one of the elite.

I’m sure a large part of what makes D/S/Cs hate Schlichter and these novels so much is their accuracy, and his exposure of exactly what they want America to become, and the methods they intend to use.  They surely don’t want people to oppose them, and Kelly Turnbull embodies the Americans they hate above all: independent, secure in the knowledge of their unalienable rights, willing to fight to preserve them, and very, very good at doing just that.  Schlichter comes far too close to the truth, contemporary and future, for the comfort of D/S/Cs.

Oh yes; in the red, the United States, no one dares try to take anyone’s guns, and there is nowhere off limits to a citizen carrying a firearm.  D/S/Cs absolutely hate that.

As a retired infantry Colonel, Schlichter writes about military issues with clarity and authority.  Not all retired officers do.  He gets firearms, and tactics, generally right—the needs of fiction sometimes surpass the need of absolute accuracy–which is something those schooled in such matters appreciate.

As Schlichter makes clear, these books are not a wish, but a warning, a warning he—and I—hope will be taken to heart so innumerable Kelly Turnbulls don’t have to leave their isolated homes and go forth to restore liberty.  If you haven’t read the series, begin with People’s Republic and read them in order.  They’re not a history.  Not only are they entertaining with vibrant, interesting characters, they’re eerily prophetic.  One can start with any of the novels and while it will be obvious some bits of information necessary for full understanding are in other books, each book is coherent in and of itself.

It’s a prophecy that does not have to come to pass, and perhaps reading, and taking to heart the lessons of, these books will help us to avoid the hellish future Schlichter so plausibly forecasts.  At the very least, Normal Americans will have a good time reading the series.  Reading doesn’t always have to be about gaining profound and world-shaking insights, but there’s a bit of that here too.