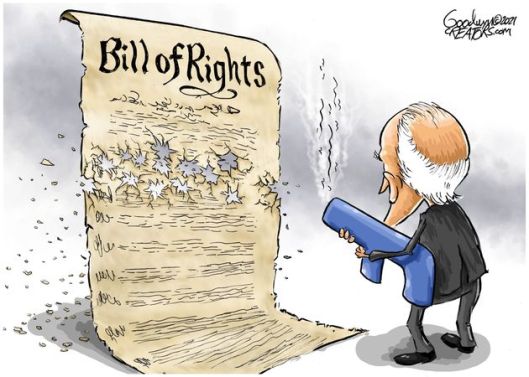 Consider this from Sarah Hoyt:

No country has ever been taken over and stayed communist that is as varied, as rich, as huge and as populous as ours. Or, btw, as well armed [emphasis mine].

If you’re going to make noises about Russia or China, go teach your grandma to suck eggs. Russia was never as populous, and China is not diverse. Besides having a culture of collective guilt/responsibility that led them directly into communism.

We don’t have that. And our base culture is ‘you and whose army?’

Regular readers, and anyone paying attention in general, know there are few more devoted anti-liberty/gun fanatics, and few dispensing more dangerous and illegal firearm advice–than Gropin’ Joe Biden.  Hoyt is right: D/S/Cs know they can never establish their socialist/communist utopia as long as Americans are armed.  As I noted in February of 2020 in Joe Biden And D/S/Cs Really Do Want You Disarmed:

During his years as Vice President, Biden provided advice on guns that would be likely to get anyone practicing it arrested and jailed.  He repeatedly claimed the best self-defense weapon was a double-barreled shotgun, and urged people to fire blindly through doors and into the air.

But what about compromise?  Anti-liberty/gun cracktivists constantly talk about “common sense gun safety” measures, and castigate normal Americans honoring the Constitution for refusing to ‘compromise.’

‘Biden, who made the remarks while talking to reporters, later said that there should be no compromise with the Republicans when it came to his extreme anti-Second Amendment proposals.

So much for Biden’s sincerely stated Inauguration Speech desire to “unify” the nation.  But what of skyrocketing crime rates, particularly in D/S/C ruled cities and states where the jails have been emptied, BLM and Antifa thugs allowed to run wild with no danger of arrest, bail abolished, crime made legal, Soros prosecutors refusing to prosecute criminals and the police defunded or otherwise prevented from doing their jobs?  Biden knows what to do: disarm the law abiding and do everything possible to deny them their Second Amendment rights.  Dr. John R. Lott comments:

With violent crime increasing over the last year, Americans want a solution. Over and over, President Joe Biden frames violent crime as a gun problem. His presentation this month was no different. But the problem is much more far-reaching. Violent crime is rising across the board, and in 2019, 92% of it didn’t involve guns. Even just 2% of gun crimes end in murder. That has been virtually the same percentage for decades, and even if gun crime surged relative to all other violent crime it would still be a relatively small percentage.

It’s not hard to find explanations for the increased violence. In many urban areas, more than half of prison inmates have been released on account of the pandemic and the releases are continuing. In some places, police have been ordered to stand down and their budgets cut. Prosecutors in many major urban areas have refused to prosecute violent criminals.

Take the link and read the whole thing.  In an update to President Dementia: Good And Hard, I linked to an article about President Biden’s much hyped CNN Town Hall on 07-21-21.  Mr. Biden’s dementia was on full and distressing display, but he did remember to attack the law abiding, as The Truth About Guns reports: 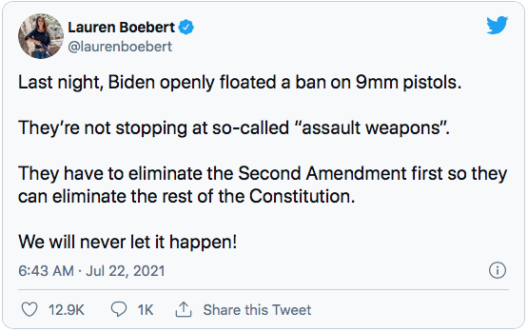 On Wednesday night, during a CNN televised town hall event, President Joe Biden confirmed — for all to clearly see — that full civilian disarmament really is the Democrats’ end game. And he did it by once again lying through his false teeth.

‘Crime is down,’ Biden claimed during a CNN town hall.

FALSE. Crime is up nationwide. Homicides are up all across the country in major cities like Chicago, New York City, Boston, Philadelphia, Atlanta, Phoenix, Austin, and Pittsburg.

‘Gun violence and murder rates are up,’ he continued. Last time I checked, assault with a deadly weapon and murder are crimes.

And Dr. Lott has already honestly and accurately fact checked Biden on that one.

Then Biden bragged again about the 1994 Assault Weapons Ban that he says he passed.

‘I’m the only guy that passed legislation, when I was a senator, to make sure we eliminated assault weapons. The idea you need a weapon that can have the ability to fire 20, 30, 40, 50, 120 shots from that weapon, whether it’s a 9mm pistol or whether it’s a rifle, is ridiculous. I’m continuing to push to eliminate the sale of those things.’

There it is. It’s no longer just scary black rifles he’s targeting. Now it’s 9mm pistols, too. Then it will be revolvers, lever guns, bolt-action rifles and shotguns. Biden’s admission is the culmination of decades of incrementalism by those whose only goal is full civilian disarmament.

We’ve warned for years they were going to move toward a ban and full-on confiscation and, guess what? The Biden administration has repeatedly proven that prediction to be 100% accurate.

Case in point…Biden’s ATF nominee, David Chipman, and his history as an ATF agent and gun control lobbyist. Look at Chipman’s calls for an assault weapons ban, regulating them under the NFA and universal background checks. 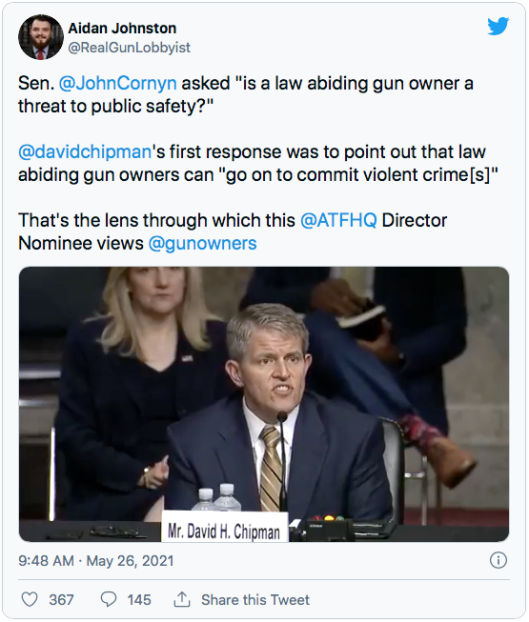 Then there are Biden’s calls to serialize almost every part of a gun and outlaw home made firearms. But as long as the Democrats and the gun control lobby never came out and fully admitted they wanted to eliminate civilian gun ownership entirely, they were safe.

They got lots of cover for this deception from their compliant friends in the media. And we were told we were hysterical, paranoid, delusional. No one wants to take your guns.

But last night President Biden said the quiet part out loud. They do have a plan. They do have an end goal and that’s to completely decimate our God-given right to keep and bear arms. He’s coming after handguns too.

‘I’ve gotten ATF, Alcohol, Tobacco, and Firearms, I have them increase their budget and increase their capacity along with the Justice Department to go after the gun shops that are not abiding by the law of doing background checks. For real, that’s number one.

Number two, number two, we are in a position where you, most of the cities, and I don’t know enough, I think you’ve had a lot of gun violence here in Cincinnati, I think it was up to what, how many, how many dead? 500 over a period? Don’t hold me to the number, whatever it was.

But my point is all across the country. And it’s not because the gun shops in the cities are selling these guns. They are either shadow gun dealers and or gun shops that are not abiding by the law. So we’re going to do major investigations and shut those guys down and put some of them in jail and for what they’re doing, selling these weapons.’

Yes, Biden’s thought processes are chaotic and he often makes little or no sense, but he’s—actually his handlers are—absolutely sure about his intentions where disarming Americans is concerned.  Still not convinced of Biden’s handler’s intentions?  Consider this from The Truth About Guns:

‘Easy access to firearms — especially certain types of firearms — can make acts of domestic terrorism more feasible to undertake and more lethal once they happen,” JOSHUA GELTZER, the deputy homeland security adviser at the NSC, told NatSec Daily in his first on-the-record interview since assuming that position this month. “As this administration works … to address some of the challenges associated with the widespread availability of firearms in this country, we are doing so with the knowledge that that is a priority in and of itself — as well as one that relates to the stepped-up efforts that we’re undertaking to address domestic terrorists.’

Who would these “Domestic terrorists” be, gentle readers?  You.  And of course, “fact checkers” covered for Biden:

Supposedly nonpartisan fact-checking org Politifact ran interference for the Biden administration this week, falsely claiming that Biden did not say he wants to ban handguns during a recent town hall.

During a Wednesday town hall event with far-left television network CNN, Biden was asked a question from a member of the audience about guns. The questioner asked, ‘So, how will you address gun violence, from a federal point of view, to actually bring about change and make our local cities safer?’

Biden responded, according to the White House transcript of the event, with a clear indication that he wants to ban at least some handguns:

‘Now, I’m not being a wise guy. There’s no reason you should — have you seen my gun violence legislation I’ve introduced? As you know — because you’re so involved — actually, crime is down; gun violence and murder rates are up. Guns. I’m the only guy that ever got passed legislation, when I was a senator, that made sure we eliminated assault weapons. The idea you need a weapon that can have the ability to fire 20, 30, 40, 50, 120 shots from that weapon — whether it’s a — whether it’s a 9-millimeter pistol or whether it’s a rifle — is ridiculous. I’m continuing to push to eliminate the sale of those things, but I’m not likely to get that done in the near term.’

The official Twitter account of the House Republican Caucus pulled a clip of these remarks and posted it with the claim that “President Biden says he wants to ban handguns.”

In spite of the fact that Biden, in his own words, clearly indicated a desire to ban at least some handguns, Politifact decided to rate this claim as ‘false.’

Why false?  Because Biden didn’t explicitly say he was planning to ban all handguns.  He merely implied he’d ban everything in addition to 9mm chamberings.

When D/S/Cs tell us they intend to revoke any part of the Bill of Rights, we’d be wise to take them at their word, regardless of what “fact checkers” have to say.

11 thoughts on “Biden & Gun Control: Take Him At His Word”