There is evidence Democrats/Socialists/Communists are worried.    The chaos they inspired, supported and continue to allow to run rampant is backfiring.  They’re worried Normal Americans, and a not inconsequential portion of their own D/S/C faithful, don’t like out of control crime and absolute social chaos.  It seems virtue signaling is not quite so attractive when one’s car is burglarized for the 5th time in a month and one risks death just leaving home.  Who coulda thunk it?

Take San Francisco, for example–please.  There are few places in America more overflowing with D/S/C faithful.  Nancy Pelosi represents it in Congress.  But it’s run by D/S/C lunatics, and its prosecutor was elected on a platform of not enforcing the law.  He is one of the few politicians who has kept his promises.  The results aren’t pretty:

*70% say the overall quality of life is plummeting.

*Residential burglaries and shoplifting are out of control, and many drug stores and big box stores have permanently closed their doors or are planning to.

*40% admit they are planning to flee San Francisco as soon as possible.

This, gentle readers, is in San Francisco, a city as blue as it gets.  It’s a city whose residents are—or were–sure of their moral and intellectual superiority.  Even so, it would seem there are limits when one can’t keep glass in the windows of their vehicles and there are no more local drug or grocery stores.  Even the nationwide D/S/C “defund the police” narrative is being disavowed: they’re trying to blame it on Republicans!  One thing, however, remains constant: the D/S/C hunger for disarming the law-abiding.  Dan Zimmerman at The Truth About Guns reports:

The gaslighting has been flowing fast and furious. The Civilian Disarmament Industrial Complex, eagerly assisted by their supporters in the media, have been claiming that the reason for the nationwide spike in violent crime is…wait for it….guns!

Literally everyone with an IQ above room temperature knows that Americans have been buying guns at a never-before-seen pace in direct response to more than a year of increased street violence, defunded police departments, and disinterested criminal justice systems.

When the increasingly pervasive crime problem began to be perceived as a political problem for the local Democrats who control America’s major cities, as well as those in Washington who cheered on many of the policies that lead to the jump in violence, the media stepped in.

Clearly, the simplest way for them to help was to place the finger of blame not on the failed policies, but on the millions of guns that had been sold and all the nuts who’ve been buying them. 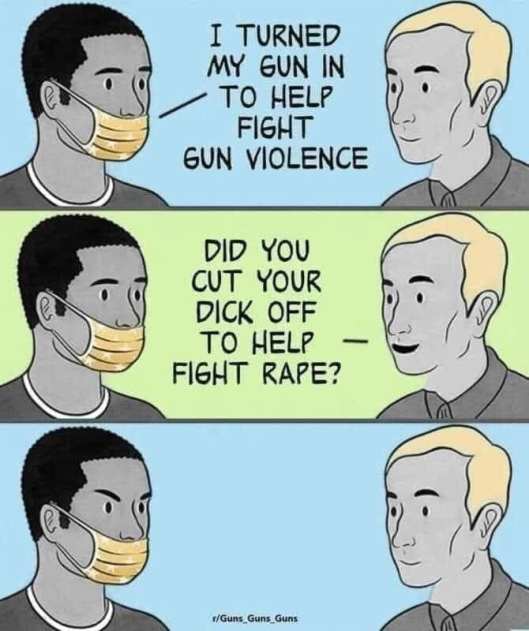 Could there be a clearer cause-effect relationship?  Does the proliferation of motor vehicles cause traffic accidents and deaths?  Most people die in bed; are mattresses–there are two in every home, and they’re unregistered!–lethal?  Most rapes are committed by men, though apparently even women can have penises these days; do penises cause rape?

“Last year, Americans bought 23 million guns. Sixty-four percent increase over 2019 sales, according to Washington Post analysis of federal data on gun background checks. That’s part of a larger trend which is an acceleration of gun sales in the U.S. in the last ten years.” Hayes said “America is a violent place. America has a lot of guns. And last year, American’s got a lot more guns and got more violent. Is it crazy to see a relationship between these two simple stark facts?”

Crazy, no.  Dishonest, yes.  Take the link and see fake statistics and enormous leaps of logic from the usual suspects.   Suffice it to say they’re claiming the enormous increase in gun sales, which is clearly in response to the lawlessness and out of control crime they’ve created, must be the cause of crime.  More guns in the hands of the law abiding, even if they’re usual preferred D/S/C victim groups like women, blacks, and various shades of LGBTQWERTY, must be the cause of an increase in crime!

Maybe that’s part of why this afternoon [07-09-21], the BidenHarris White House hastily announced a meeting scheduled for Monday to emphasize the bumbling administration’s efforts to combat the ‘gun violence’ surge.

As always, they try to define the terms of the debate.  “Gun violence” is no more real than “knife violence,” “hand and foot violence,”  “motor vehicle violence,” or the violence of words they don’t like.  Inanimate objects are incapable of committing violence, but they and their owners must be punished for the crimes they don’t commit.

The White House says Biden will highlight his administration’s push to increase funding for local law enforcement to improve community policing practices through the $1.9 trillion COVID-19 relief bill he signed into law earlier this year. Some states and local governments are also using funding from that so-called American Rescue Plan to fund youth employment programs and other measures that could help curtail crime.

Translation: the ‘defund the police’ push that state and local Democrats across the country pushed and cheered on has been an unmitigated disaster in terms of increased crime, lives lost, and blame directed at the Democrats who pushed it.

Biden’s budget request to Congress also calls for more funding for federal and state law enforcement, including the Bureau of Alcohol, Tobacco, Firearms and Explosives to improve that agency’s ability to track and disrupt gun trafficking.

Biden will no doubt make the case Monday [he did] that a critical part of doing something about the violent crime spike and all of that alleged gun trafficking is having his man leading the ATF. That means confirming [anti-liberty/gun fanatic David] Chipman with all deliberate speed.

Will any of this make a difference in crimes committed? Please.

Still, he’ll be able to say he tossed lots of taxpayer dollars at putting more cops on the street, while continuing to lie about the scourge of guns and gun makers. In the end, about the only thing that might make Monday’s dog and pony show a success is if his handlers give him an ice cream cone to hold while he talks.

Let us, gentle readers, examine a bit of reality.  I’m speaking of real reality, not a narrative/alternate reality/way things ought to be if only D/S/Cs had total control reality. 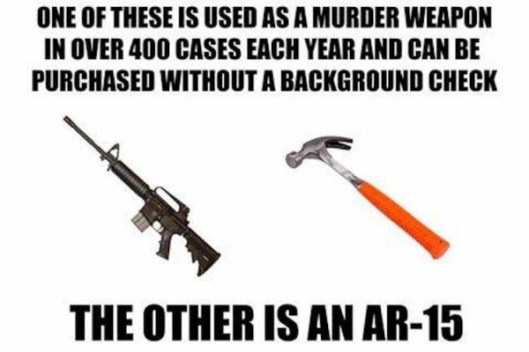 A semblance of civilization is possible because most Americans are willing to obey most laws most of the time.  It’s a part of the social contract.  They surrender a little absolute autonomy in exchange for law and order.  Virtually no one approaching a stop sign, thinks: “by voluntarily coming to a complete stop at this stop sign, I am upholding the social contract and enabling civilization,” yet each individual, voluntary act of compliance with the law, in letter and more importantly, in spirit, makes civilization possible.

It is these Americans, of both genders and all races, who are not only trustworthy with firearms, but who have an unalienable, fundamental right to keep and bear arms.  They will no more violate the law with guns than they would run that stop sign.  The principle is the same: some things are morally wrong.  Moral wrongs harm not only the individual, but society.  The guns they own, no matter their number or type, will not commit “gun violence.”

Unfortunately, some portion of the population is not so willing to voluntarily obey the law.  Some, thankfully a relatively small portion, are actual sociopaths.  They have no feelings for others and will do whatever they wish regardless of the damage they do others.  A larger portion will commit a variety of crimes if they think there is a reasonable chance they’ll get away with it; theirs is a situational morality.  Some are simply criminals.  There is very much something wrong with the mental/emotional governors such people have.  They are going to commit crimes because they want to and they like it.  They are like D/S/C politicians in that they have a near sexual—and in some cases overtly sexual—thrill in committing crimes and hurting others.  It’s ultimately a matter of power.  Nothing else makes them feel so strong, smart and important.

Thankfully, most will not commit crimes that encourage them to use weapons of any kind.  When states like California decriminalize theft under $1000 dollars, they inspire thousands of criminals that would not otherwise commit theft, or not nearly as many thefts, because when theft was a crime, there were consequences.  Make crime pay, and more and more of those with faulty governors will become criminals and commit more crimes.

For many criminals, crime is like addiction.  They begin with lower level highs, and finding success and thrills, escalate.  And why not, if there is little or no chance of being arrested, if arrested, they’ll be immediately released, and once released, the prosecutor will drop the charges? 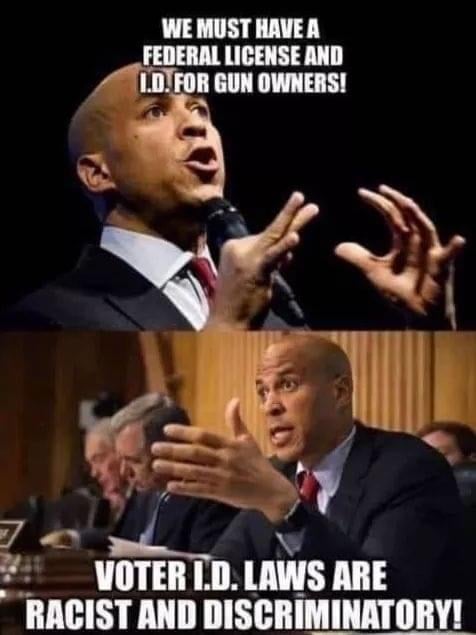 Who, then, is responsible for skyrocketing crime rates—mostly in D/S/C ruled cities and states?  Honest, law-abiding citizens whose guns will never be fired in anger no matter how many or what type they own?  People who will not commit crimes, unarmed or armed?  Or is it more likely those responsible are the D/S/C politicians, race hustlers, anarchists, BLM, Antifa and their supporters who have hamstrung the police, filled prosecutor’s offices with Marxist tools, abolished bail, emptied the prisons of violent felons, and encouraged and financially supported riot, arson, murder and all manner of other crimes?  Could it be the same people who, having made our cities unsafe, made it impossible for the police to do their jobs, want to disarm the law-abiding? Even the Leftist Guardian reports on a recent study that proves increased gun sales are not driving the increase in crime. 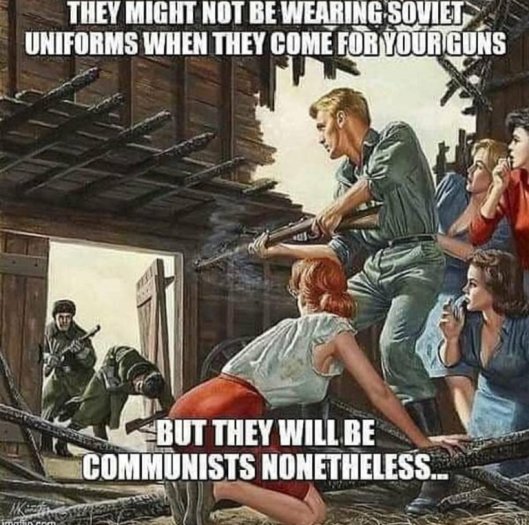 What’s the difference, by the way, between criminals and anyone that would disarm the honest, making them easy pickings for criminals and tyrants?