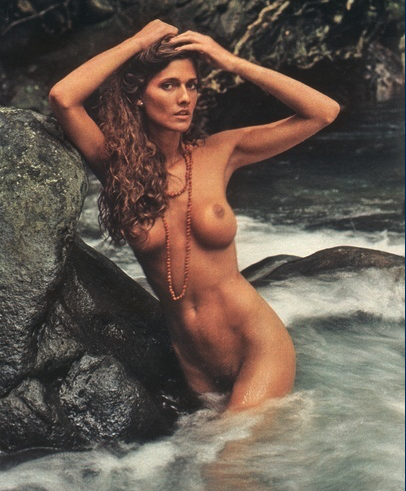 Long ago when I was playing cops and robbers—I was a detective then–I happened to visit a burglar in his mobile home.  We were chatting away amiably about his many crimes, when I happened to notice, among the several Playboy centerfolds taped to the peeling wall, one of Tula Cossey.  Cossey has the distinction of being the first trans whatever to pose for Playboy (June, 1981).  Even back then, the doctors doing Cossey’s cosmetic work were artists.  Many men pretending to be women don’t carry it off very well, particularly not physically, but Cossey, stark naked—as you can see–was convincing.

I suppressed a grin as I pointed out the foldout and told the burglar Cossey was a guy.  A look of absolute horror came over his pimply, unshaved face, and he leapt to his feet, bounced across the room, pulled it off the wall, and tore it into bits while making a variety of disgusted sounds.  It was all I could do not to break out laughing.  In the classic “Sleeper,” Woody Allen’s character said he was good at sex because he practiced all the time when he was alone.  I suspect the pinup of Cossey was the burglar’s favorite practice material.  What else would provoke such an emphatic betrayal response?

I wonder what that burglar would think of this?  From Matt Margolis at PJ Media: …27-year-old Kataluna Enriquez was crowned Miss Nevada USA, and thus will compete for the Miss USA title later this year. Enriquez is a man who identifies as a woman. He competed against 21 women to win the title.

‘Huge thank you to everyone who supported me from day one,’ Enriquez posted to Instagram ‘My community, you are always in my heart. My win is our win. We just made history. Happy pride.’

Enriquez will be the first transgender person to compete for the title of Miss USA.

In the classic play “Oklahoma,” Ado Annie sings: “Anything you can do I can do better.”  She’s saying she can best men at anything.  Anything, apparently, but winning beauty contests.  Ooops.  I didn’t mean to say “men.”  I really meant “child bearing persons.”  Sorry.