Those of us paying attention understand a college degree is no longer imbued with the prestige it once enjoyed.  To be sure, some jobs, such as teaching, require a Bachelor’s degree as an entrance requirement.  The same is true for medicine, law and other career paths.  But Academia has so devalued its brand as to make a mockery of “higher education.  The invaluable Victor Davis Hanson comments:

Professional athletes are now reminders of why no one ever wants to be ‘enlightened’ by multimillionaire quarter-educated narcissists. The public a half-century ago lost faith in academia. It wasn’t just that most new bad ideas could be traced to the campus or that hothouse professors increasingly seemed both ignorant and arrogant, but rather their product—educating students—was defective. No one believes anymore a BA is synonymous with knowledge. More likely, it is a euphemism for incurring $100,000 in debt.

As a life-long musician, I’ve long understood the stratification of “professional” music.  The higher levels of the game are scarcely understood by the public.  During my undergraduate years studying music, I was offered, on the strength of my voice, a scholarship for a well-respected master’s program, which would have inevitably led to a doctorate, and to the kinds of opportunities that likely would have led to a career as a professional musician.

I turned it down, which as it turned out, was smart on many levels.  Not only did I, shortly thereafter, develop a propensity to sinus infections—death to a professional singer—I wanted to remain married, which has been my greatest success.  That kind of life is mostly living out of suitcases, constantly traveling to wherever the performances are, wherever one can get paid.  Relatively few soloists make the kind of living the best-known singers make.  Most, with a combination of teaching and doing whatever else is necessary to hold body and soul together, scrape out a meager living with no insurance and no retirement fund.  This is great sacrifice for occasional time in the spotlight, constant, ruthless self-promotion and a limited acclaim in the world of art music.

In other parts of the music world, musical illiterates, people who have no formal schooling, and cannot read or write music, make–and usually squander–millions as rock/pop performers.  In recent decades, the same is true of Rap “musicians,” people who in many cases are not so much as mediocre singers and worse poets, for Rap is best categorized as accompanied poetry of a sort.

I do not denigrate anything other than “art”–what most would call “classical”–music.  I’ve performed, with the exception of Rap, pretty much every kind of music, and found enjoyment in all genres.  I do not look down on those with less schooling or performance ability.  We all have different talents and make different choices in life.  One of the great, universal joys of music is it is accessible to all in myriad ways, and is one of life’s great joys and comforts.

One truth, until recently, has shown through: the highest levels of art music are reached only through merit.  How could it be otherwise?  There are very few positions in top tier orchestras, the pay is, for the most part, mediocre, and competition is fierce.  Merit has been–must be–a necessity.  Why should an orchestra, or any top tier ensemble, accept anything other than the best?  Who will pay to see and hear less?

In the rarified atmosphere of art music, destruction lurks, as I noted in Symphony Orchestras: The Diversity of Poverty.  The article speaks to a movement to end “blind” auditions, a practice very, very old.  Those auditioning for a symphony orchestra slot perform behind a curtain or screen, so the director cannot see them, only hear them.  This, to the way of contemporary woke-think, is racist, because not enough Black musicians are being chosen.  As we all now know, nothing is more important than skin color, self-identified gender, etc., so goodbye merit, hello equity.  An excerpt from that article:

Tommasini would not have us believe there are innumerable black, Hispanic, female, LGBTQWERTY, and other categories of outstanding symphonic musicians that would be hired were it not for blind auditions.  He knows if such people were out there, they would be hired through blind auditions because their brilliance would be evident.

No.  What Tommasini wants, and he says it specifically, is to hire second-rate musicians because of the way they’ll look–“diverse”– onstage.  This, gentle readers, is where the business of music enters into the picture.

People come to symphony performances expecting to see and hear perfection.  They don’t care how many black people are in the strings or how many women are in the woodwinds, they care about the quality of the performance.  They are a discerning audience.  When that quality suffers, and that’s exactly what Tommasini is urging in the name of “diversity,” audiences will dwindle, and symphonies will die.

Poverty is diverse too.  Get woke, go broke.

From where do the musicians at the highest levels come?  Talent is born, but without education and constant development and correct practice, it is only potential.  Among the most famous schools of music, drama and dance in the world is Julliard, in New York City.  Until recently, a Julliard degree actually meant something.  Directors auditioning Julliard trained musicians could be confident they’d be among the best in the world, blind auditions or not. As the invaluable Heather Mac Donald reports, no longer.

In September 2020, the Juilliard School’s Drama Division announced a series of ‘community meetings’ to address ‘Equity, Diversity, Inclusion, and Belonging (EDIB) issues.” The school’s growing cadre of diversity bureaucrats would discuss Juilliard’s’ ‘anti-racism work.’ The head of the Center for Racial Healing would give a presentation. Workshops would address such topics as “race in rehearsal” and ‘voice and speech and race.’ NYU theater professor Michael McElroy, one of the school’s two external diversity consultants, would offer a three-day seminar in black musical culture.

You can see where this is going, can’t you gentle readers?

Those efforts picked up steam after the death of George Floyd in Minneapolis on May 25, 2020. Within a week, Woetzel and the EDIB taskforce had sent out three schoolwide emails on the ‘work’ Juilliard still needed to do to become an ‘anti-racist community.’ The school sponsored a blacks-only ‘healing’ space. It recommended that students and faculty read the books of Ta-Nehisi Coates, Robin DiAngelo, Ibram X. Kendi, and Michelle Alexander to understand systemic racism.

While the focus of MacDonald’s article is on the Julliard School Of Drama, the music school—every aspect of Julliard–is equally crippled.  It’s worse—more insanely racist–than one can imagine:

Black drama students have been pushing back on the school’s classical tradition for the past ten years, according to a school observer. A drama division graduate expressed a typical view. His ‘light’ had been extinguished at Juilliard by having to study ‘about [sic] how great white authors are,’ he told American Theater. This self-pity would have astonished the division’s early leaders. James Houghton, one of those early leaders, expressed his goals for the program: ‘I want to see actors and playwrights coming out of this school with an absolute passion and joy connected to the craft of theater-making.’ That black students should feel oppressed by studying some the greatest drama ever written shows how conclusively Juilliard has failed to articulate what were once its core values. 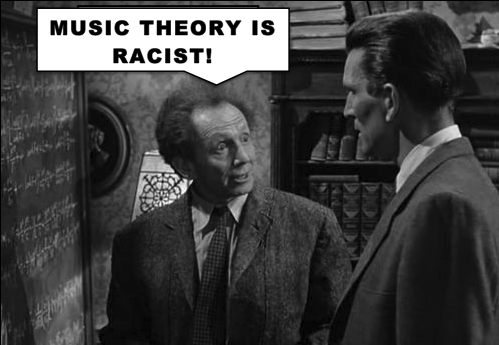 Remember, these are students given the rare opportunity to learn from the best, to study and perform the greatest works human beings have ever created, and having that opportunity, perhaps to be people whose works and accomplishments in acting and the other arts, will be an inspiration to future generations.  We know, for example, math is racist, but now so is music theory, as I explain in Barbarians At The Scores.  A Julliard education used to also offer connections, a foot in the door of the highest levels of art.  But no.  They chose to tear it all down, to leave the future with a period of destruction and emptiness, a bizarre time when those given the opportunity to become great went mad with racism.

Juilliard’s ferment is nothing compared with the theater world as a whole, however (or compared with the classical music world, as described in City Journal’s upcoming summer issue.) During last summer’s George Floyd riots, a manifesto appeared online: “We See You White American Theater” (We See You W.A.T.). Rambling and repetitious, the document justified its redundancies as a ‘reflection of the significance [of those repeated demands] to the constituents’ and as ‘also due to the interdependent functioning of the theatrical ecosystem.’ Its inconsistent ‘tones and formatting styles’ were designed to ‘retain our orality,’ a technique ‘designed to hold the multiplicity and urgency we lay claim to given the persistent devaluation of our voices.’ We See You W.A.T. insisted that ‘radical change on both cultural and economic fronts’ was required to eradicate white supremacy.

No gentle readers, you’re not undereducated, too simple to understand such linguistic brilliance.  What these people are saying, what they’re demanding, is nonsense, utter ignorant stupidity.  They’re bluffing people of genuine intellect and accomplishment who are too intimidated to call their bluff.  Why wouldn’t Julliard’s faculty and administration simply say: “Julliard doesn’t meet your exalted needs?  Very well.  Feel free to withdraw.  There are thousands that would be delighted to take your place.  They understand the value of what Julliard offers.  Since you’re so brilliant and enlightened, I’m sure you can establish your own schools and performance facilities.  Surely if you’re right, there will be no lack of patrons for your brand of art equity.  Don’t let the door hit you on your woke ass on the way out.”  But Julliard is in New York City, and obviously, great talent is not automatically accompanied by courage and foresight. Mac Donald concludes:

This theater veteran knows 40 to 50 theater professionals who have left the profession or are about to do so, ‘so toxic’ has the environment become. Any alternative perspective or criticism becomes: ‘You do not respect us.’ If a voice coach observes that a student’s voice is not coming from his core, the student will respond: ‘That is because I don’t feel comfortable in class with you.’

And why, exactly, should among the greatest teachers of the arts in the world “respect” dim-witted, uneducated loud-mouthed racists?  What have they accomplished?  From whence does their moral authority come?

An arts consultant reports the ‘unspoken fear’ of theater leaders: they will put on quota-filling plays, and no one will come. ‘I have talked to long time audience members who have no interest in seeing much of this new work,’ whose main purpose is to indict white America, the consultant says.

Unexpectedly, audiences don’t want to pay to see poorly written racist screeds that insult them, everything they’ve ever done and believed, and that seek to destroy western civilization.  Who coulda thunk it? 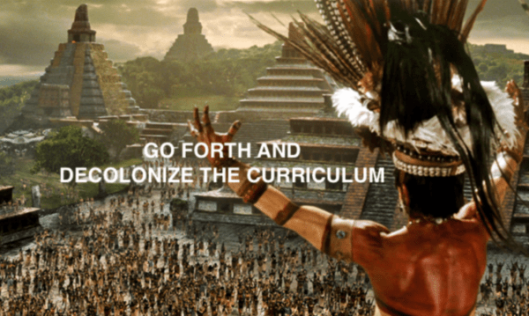 The Black Lives Matter movement in the arts is only nominally about ‘inclusion.’ In fact, it is about exclusion and the power that has motivated every revolutionary mob: the power of negation, the power to tear things down. This purportedly ‘inclusive’ movement will result in a world of constricted imaginative possibility and stunted human growth.

A leader in the arts world, told of Juilliard’s travails, observes: ‘This is a crucial time to stand up and call out what is an overly emotional and irrational attack on the best of what humanity has to offer.’

He would not allow me to reveal his name or affiliation.

It has taken centuries—millennia—to build western civilization to its present pinnacle of excellence, of liberty and prosperity.  The creation of the leisure necessary to produce and enjoy the arts is a monumental achievement of sacrifice–blood, sweat and tears.  And it can all be lost in a blink of an equitable eye.

4 thoughts on “Julliard: In The Blink Of An Equitable Eye”