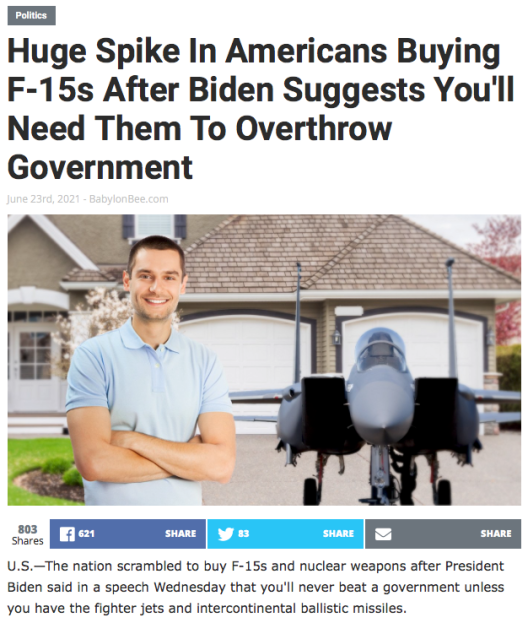 On Wednesday, June 23, 2021, Temporary President Biden gave a teleprompter reading billed as a major speech on crime.  It seems even Democrats/Socialists/Communists are now forced into a corner by the crime they’ve unleashed and encouraged, thus the teleprompter reading.  The solution to crime, it seems, is to greatly diminish individual liberty while greatly increasing the power of government.  Who knew it was so simple, yet so tyrannical?

I’ve been gathering, for some time, information for an article on Biden’s rapidly deteriorating mental condition, which as such things normally go, is also affecting his general health.  We find ourselves in a bizarre situation circa June, 2021—actually for more than the last year.  Democrats, realizing every one of their presidential candidates would be defeated by President Trump (Mayor Pete?  Kamala Harris?), even with the unprecedented level of electoral cheating they had planned, so they stepped up their game.  The media was all in, so was Hollywood and Academia, but for the first time it was necessary to fully expose an ally they kept under the radar for years: big tech.  With all of these resources, and absolutely blatant cheating, they were able—barely—to install the Biden puppet presidency.

They knew then Joe Biden was suffering from progressive dementia, so they hid him as much as possible, and surely filled him full of drugs for the few occasions they could not avoid exposing him to the public—to danger.  Only six months into the puppet presidency, his “aides”—actually, his handlers—are, more and more, keeping him away from the public, and away from any questions.  The drugs aren’t working anymore.  Even D/S/Cs are beginning to speak out about his growing infirmity.

I watched his teleprompter reading.  He is much less capable than even a month ago.  He can barely pronounce consonants, slurs and runs words together, is confused by the names of political figures, and his voice lacks the slightest energy.  He looks, and sounds, old and frail indeed, the rapidly failing grandfather at the dinner table.  Most family members try to pay polite attention, but he’s mumbling nonsense much of the time, and they tune out, leaving him to his rapidly collapsing world.  America’s enemies watched too, and they’re surely not feeling pity.

It was a frightening performance, particularly when he implicitly threatened, just like the idiotic Chinese spy shagger CA Rep. Eric Swalwell, to nuc Americans.  Then again, D/S/Cs have always had trouble knowing who the enemy really is.  It was also frightening because his solution to the crime running rampant in America’s D/S/C ruled cities is to deprive Americans elsewhere of their unalienable liberties: only gun control can reduce crime, that and a few token social justice programs that have universally failed in the past, and can have no effect on people who commit crimes because they want to and because they like it.   That’s most criminals, by the way.  Evil exists.

It was frightening too because our enemies—Russia and China come to mind—are surely calculating conquering us will be easier than they ever imagined.  People like Biden—actually, his D/S/C handlers–will do most of the work for them.

I’ll be writing in detail about Biden’s dementia and its consequences in the near future, but for today, let’s review the gun control/threats against Americans portion of his speech, which to be fair, was most of it.  The Attorney General, Merrick Garland?  He’s a standard, anti-liberty, anti-American D/S/C commissar, and he’s going to do as much damage as he can while he can.  Temporary President Biden began by lying about the origins and reality of the Second Amendment in the colonies, saying individuals couldn’t own cannon, among other weapons.  There is no evidence for that proposition.  Then he said this:

The quote he mangled is from Thomas Jefferson (I’ve included a few additional sentences from the entire letter for clarity):

And what country can preserve it’s liberties if their rulers are not warned from time to time that their people preserve the spirit of resistance? Let them take arms. The remedy is to set them right as to facts, pardon and pacify them. What signify a few lives lost in a century or two?  ‘The tree of liberty must be refreshed from time to time with the blood of patriots and tyrants.’

It’s meaning is as clear today as it was in 1787.  What the quote doesn’t convey is Biden’s confused, slurred, halting delivery.  Biden’s F-15/nuc threat—and yes, that’s exactly what it was—is as ill-advised as it is strategically and tactically stupid.  Would that he were so firm with the Chinese.  The Babylon Bee, as usual, caught the subtext and exposed the irony: 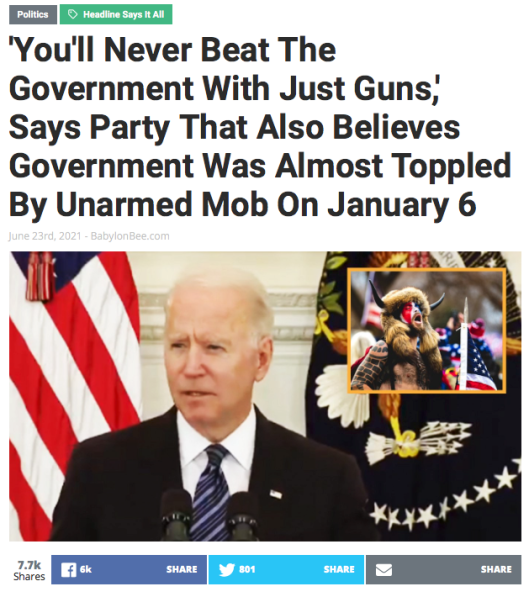 The all-powerful Biden Administration is invincible because they have fighter jets and nuclear weapons, but the entire nation came within a hairsbreadth of destruction on January 6 at the hands of a group of unarmed Americans who went home after a few hours of sight seeing, selfie-taking, some rowdy protest, and professional, but ultimately ineffective, agitation (we won’t mention the probability of FBI agitation–now)?  The lovely and brilliant Dana Loesch made the same point: 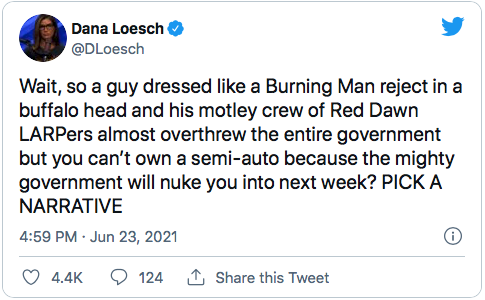 This threat, and the mangling of Jefferson, is not a new theme with Biden.  Note the date on this tweet: 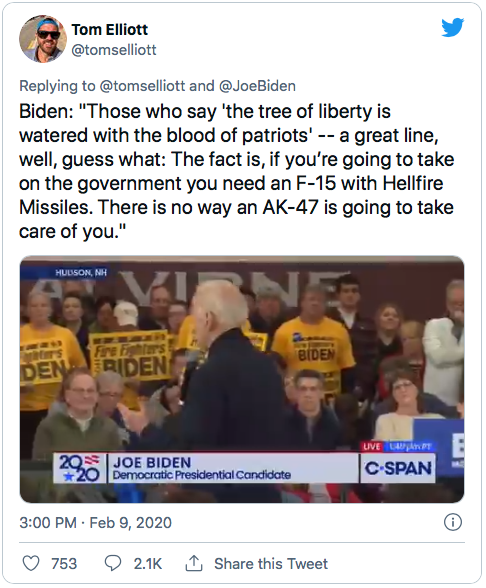 As regular readers know, I’ve reviewed Kurt Schlichter’s Kelly Turnbull novels, which have turned out to be eerily prophetic.  By all means, gentle readers, buy and read all five in print, and look for the 6th, scheduled for release shortly.  Schlichter is a genuine Army officer who understands the strategic, tactical, and unlike Biden’s handlers, the logistical, so let’s avail ourselves of his wisdom, beginning with this: 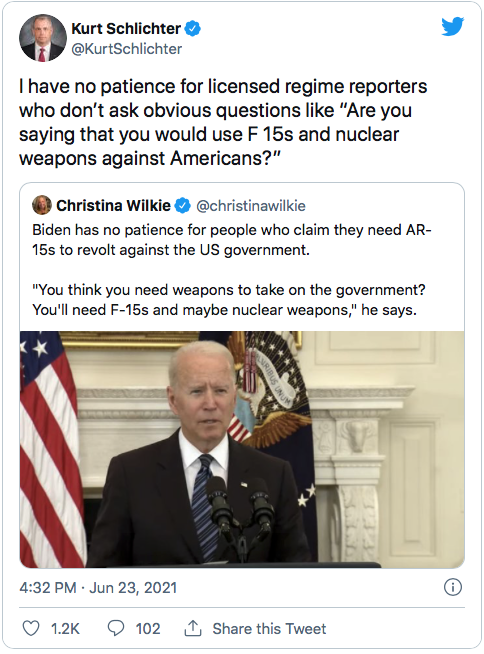 Of course we know why the media won’t ask such questions.  Most aren’t smart enough, and even if they were, they’re D/S/C operatives with bylines.  They aren’t going to do anything to damage the narrative.  This is a really good question:

Did you know the acronym, gentle readers?  Mr. Biden absolutely should know it and its implications, after all, he’s been in this game a half century.  Any bets on whether he knows either? 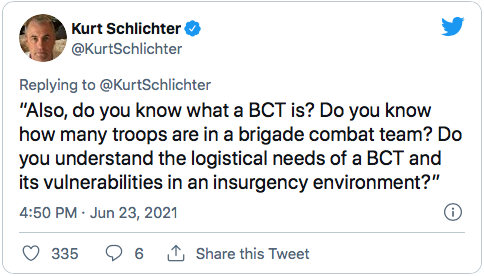 A BCT is normally commanded by a Colonel and commonly consists of something over 4000 troops.  A venerable saying is “amateurs talk tactics; professionals talk logistics.”  Logistics is the art and science of getting a BCT where it needs to fight with all the equipment and other materials it needs to fight, and how to sustain that unit in the short and long terms.  That’s hard.  Battles and wars are won by armies that have mastered logistics.  Any bets on whether Mr. Biden—or his handlers–understands any of that?  Any bets on whether they, in their arrogance and hatred for Normal Americans, care? 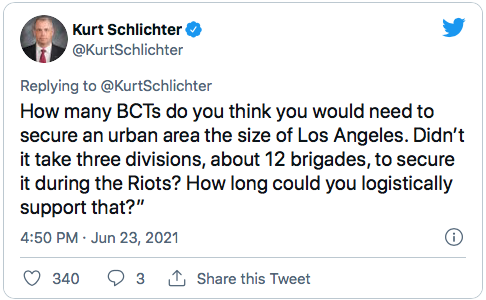 See what I mean?  But Biden has military professionals to advise him!  Unfortunately, as the Chairman of the Joint Chiefs of Staff testified on Wednesday, those professionals are too busy implementing Critical Race Theory indoctrination and purging the ranks of the non-woke. 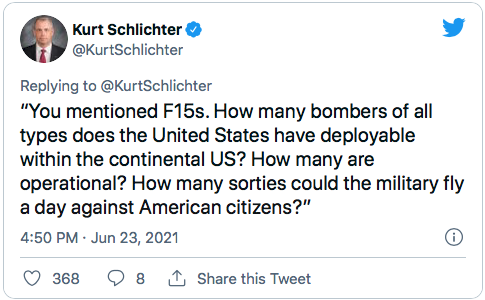 Good questions all.  These are truly momentous questions: 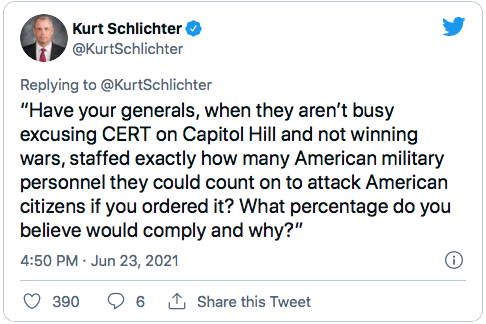 One of the reasons the old Soviet Union stationed its soldiers far away from their homes was it made it more likely they’d kill their own citizens on command.  To be sure, there will be high and lower ranking officers that will attack fellow Americans to preserve not the Constitution they’re sworn to protect, but to keep people like Biden’s handlers in power.  But many will not, and NCOs and the genuinely patriotic Normal Americans that comprise most of our forces, absolutely will not.  This is particularly so for the National Guard and Reserve forces.  They’re going to murder their families, friends and neighbors to establish a socialist utopia?  Are Biden’s handlers really sufficiently stupid—and evil—to believe that?  To issue those orders?  For a genuinely plausible view about how that sort of thing would shake out, I recommend Stephen Coonts’ Liberty’s Last Stand, which I reviewed in 2016. 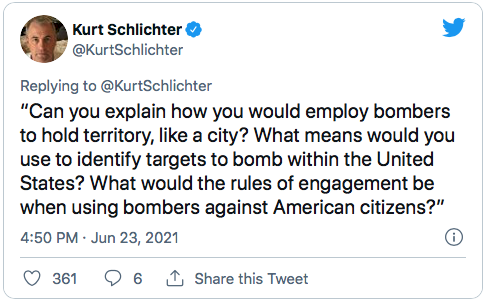 This question reveals the total lack of understanding of the kind of war Biden’s handlers would unleash.  There will be no set piece, army against army, battles on the plains of Kansas, no formations of Americans for D/S/Cs to localize and bomb.  Would they send strikes against individual bloggers?  Non-reliable state governors and legislatures? National Guard units that refused to murder fellow Americans?  What would trigger an F-15 strike?  A word?  Imagined opposition to the narrative?  Or would D/S/Cs just begin nuking red cities and states to eliminate as much potential opposition as possible? 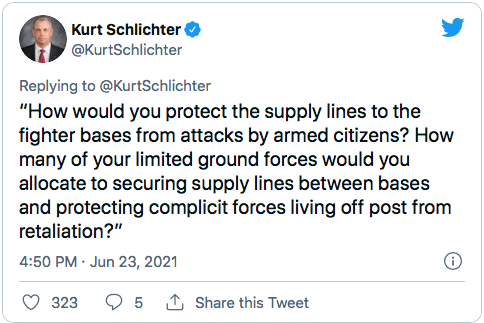 The vulnerability of supply lines, and of fighter pilots, tanks and helicopter crews, and the specialists that maintain and arm those weapons is a major concern for actual professionals.  Once our military begins killing fellow Americans, many of who are military trained and very proficient, there will be no fair play, no quarter given.  This is an issue addressed in Coonts’ book, and in Schlichter’s books as well.

Under those circumstances, Americans wouldn’t leave DC, or the installations and homes of those killing them, alone.  As our enemies in the past have discovered, you don’t want to piss off actual Americans. 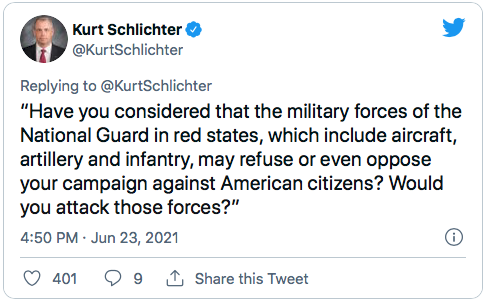 At the very least, many, probably most, of those units would refuse to fight, or simply leave, taking their weapons and supplies with them.  There would be no specific facilities for D/S/C forces to attack.  And if they were so stupid as to attack the remaining posts, they’d be killing people loyal to them. 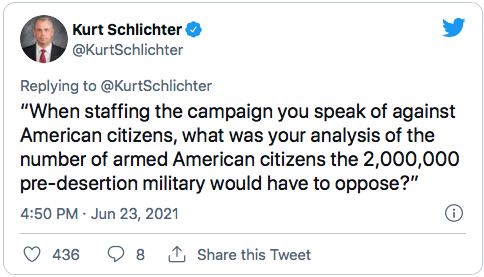 Even if only 10% of Americans resisted, that’s more than 30 million, who as the last paragraph noted, would be armed with considerably more than AR-15s.  This is perhaps the most important question: 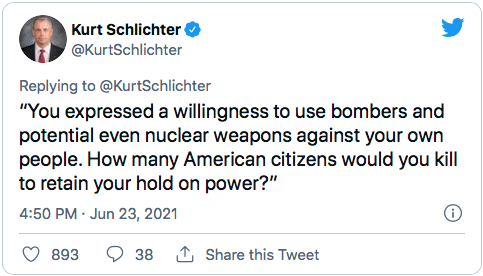 I suspect the answer Biden’s handlers would give is: “as many as necessary.”  Imagine, gentle readers, the response of the media and congressional D/S/Cs if Donald Trump had said anything remotely like what Mr. Biden’s misfiring brain ejaculated forth on Wednesday.  Biden’s determination to dry up Americans’ supply of weapons, and to disarm them is more than bad enough.

When the President of the United States is clearly senile, when he’s threatening wholesale murder of the American people–even implicitly–when any sane American understands a considerable number—if not all—of his handlers are more than willing to carry out his mindless threats, we’re living in, as the ancient Chinese threat said, “interesting times.”