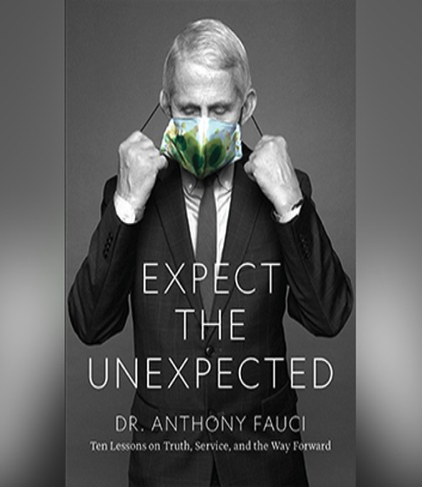 I wonder if he saw this coming…

Imagine, gentle readers, that you are the head of the federal agency responsible for dealing with pandemics and similar emergencies.  You’ve been there 40 years, and you’re not going to be there too much longer.  You want to retire with a magnificent legacy, a testament to your decades of brilliant science and leadership.

Then, to your horror, a pandemic is unleashed on the world.  It’s obvious to you and others in your medical circles it is a human engineered virus.  Worse, you know it came from a level four lab in Wuhan, China. Of course, China denies it and covers up.  What should you do?

As a medical doctor, you’re obligated to do no harm.  Your job obligates you to advise the president and other ranking officials, with the sole aim of protecting the health and safety of the people of the United States.  Initial estimates suggest more than a hundred million people may die worldwide, tens of millions in America.  Obviously, you must gather the best scientific information.  You must see that a complete investigation of the origin of the virus is done, and you must recommend measures that will have the best chance of ameliorating the effects of the contagion.  You must tell the truth.

But you have a problem, actually, several very big problems.  You’ve secretly funded dangerous gain of function research–research aimed at altering naturally occurring viruses so they will be particularly infectious in humans–illegal in the US, through the lab in Wuhan.  You’ve funneled taxpayer money through a conduit to that lab, a lab known for sloppy safety protocols, a lab in a Communist country that is the enemy of the United States, engaged in a massive military build up and directly threatening its side of the world.  And of course, you want to retire, thought of as a sort of medical saint.  What do you do?

You lie.  You lie in ways small and large.  You commit perjury under oath before Congress, denying that a single penny ever went to the Wuhan lab, and certainly, you had nothing to do with it.  You inadvertently tell the truth that masks are essentially useless, but then you lie, saying not only they’re essential, but people ought to wear two or three.

Your lies contribute directly to economic disaster, and to depriving children of a year of education, a year of development that can never be adequately recovered.  You pile lie upon lie, and they become so high and heavy, you can do nothing but keep trying to prop them up with additional lies.

Fortunately, the media is more than willing to prop up your lies.  In fact, they worship you as a sort of saint.  Big Tech is more than willing to help by silencing anyone trying to tell the truth.  The reputations and lives of honest scientists, doctors and citizens are ruined, China benefits and becomes even more threatening.  And miracle of miracles, a complete idiot puppet is installed in the White House to further prop up your lies.  And then, suddenly, it all falls apart.

Even before the rotten edifice of deception collapses completely, most Americans have come to see through the fraud—your fraud.  At Legal Insurrection, “Fuzzy Slippers” explains:

This has been a terrible, horrible, no good, very bad week for the propagandists in the leftstream activist media and the truth-deniers in Big Tech.  First, we learn that, yes, the coronavirus did likely emerge, bio-engineered, from a Chinese lab. Now we are learning what Anthony Fauci knew and when he knew it.

The Washington Post and BuzzFeed obtained via FOIA thousands of emails to and from Fauci regarding the WuFlu pandemic.

By all means, take the link and read the whole article, but I’ll tell at least a part of the tale through just a few of the thousands of e-mails:

Fauci told Senator Rand Paul, a medical doctor, masks were absolute protection, not at all theater.  He lied. 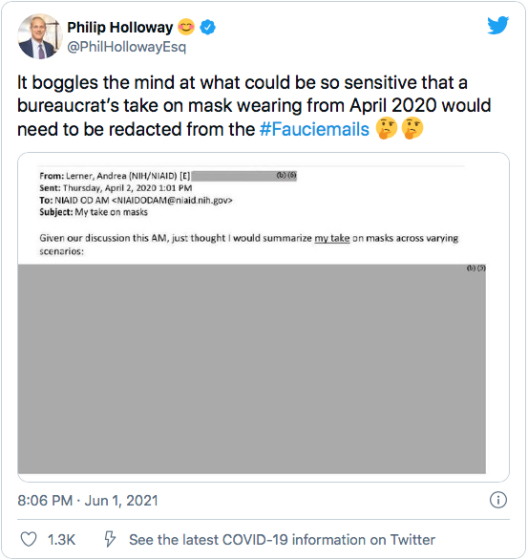 The only reason materials under FOIA can be redacted like this is the law enforcement exception, meaning materials must be kept secret to avoid blowing investigations.  Is Fauci under criminal investigation?  He surely deserves it.  Fauci had no lack of informed sources trying to tell him about China’s lies and cover up.  A noted physicist with real China experience tried to tell him, sending him information.  Here was his reply:

Here’s the truth he refused to tell the public: 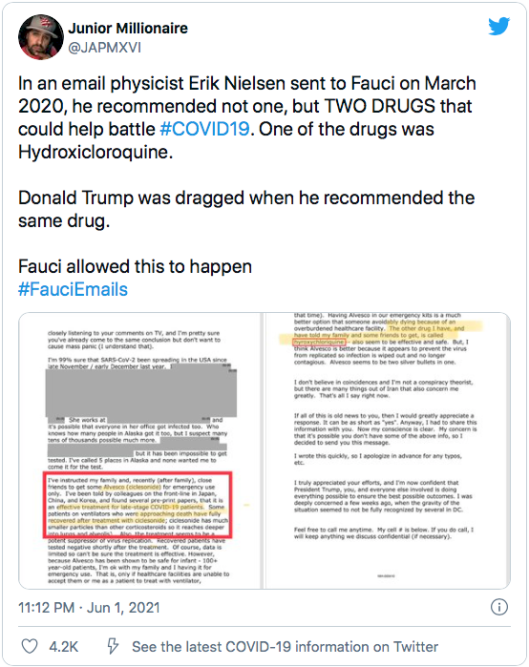 Fauci allowed a great deal of evil to happen.  One wonders how many died because of his lies?

Sometimes there is justice, and Paul’s two-word response is the height of eloquence.  Paul was right, and not just about the uselessness of masks.

How have we come to this?  How have we allowed ourselves to be ruled by bureaucrats, and particularly stupid, weak and evil bureaucrats at that?

Fauci knew this early.  Additional e-mails reveal he, and his underlings, immediately swung into action—to bury it.  Oh yes, gentle readers, Fauci didn’t do it all himself.  A great many in the “health” hierarchy were involved in deceiving the American people and the world, and in contributing to the deaths of hundreds of thousands, likely more.

Indeed, how do we trust any element of the Federal Government? 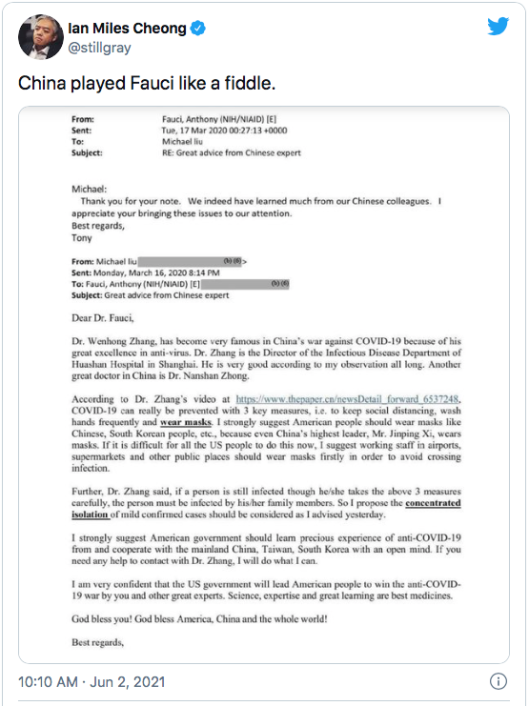 China certainly did, and it continues to play the Biden/Harris/Whoever Administration—Joe Biden, Temporary President—like a harp from Hell.

We learn from Red State, Fauci’s book has, all of a sudden, disappeared.  The publisher has pulled if from presales, and Amazon has disappeared it.  The media is doing two things: sneaking back and stealth-editing its earlier mistakes:

The media is hurriedly sneaking back and stealth editing earlier articles, trying to somehow salvage the tattered shreds of its reputation: 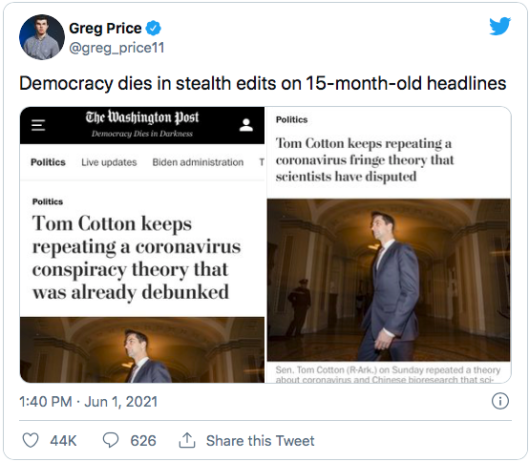 It is also doing what it does best: ignoring anything that damages the narrative:

How is it possible?  This explains:

How do you know when a politician or bureaucrat is a dead duck?  When The Babylon Bee mocks them with particular effectiveness.  Consider these satirical—faked—but entirely plausible, e-mails:

That had to leave a mark. 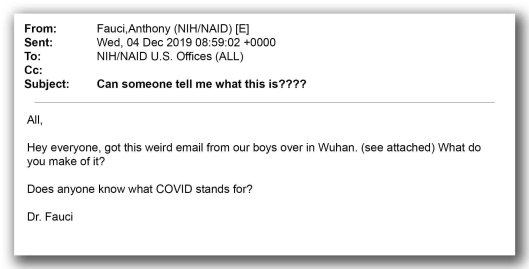 That one definitely left a mark.

They must have paid up.  Matt Margolis at PJ Media reports Fauci may be leaving sooner than he expected, and his canonization has likely been put on pause:

By all means, take the link and read the rest of The Bee’s fake e-mails; they’re darkly hilarious, and some very well may be true.  Truth is indeed stranger than fiction.  I’m sure I’ll have more on this in the future.  For now, it appears some sanity may be rushing back in ways corrupt politicians did their best to prevent.  The science deniers, Covid deniers and skeptics in general were right, because they weren’t denying science, only trying to tell the truth.  I suspect we’re going to discover just about everything we have been told by bureaucrats and D/S/Cs has been a lie.  All those deaths, all that economic damage, all the harms inflicted in the name of “public safety,” all lies.

Somebody, actually, lots of somebodies, need to pay.

3 thoughts on “Fauci: Canonization On Pause”