I last wrote on the Rayshard Brooks case in August of 2020 (the SMM Brooks archive is here).  As I noted at the time, the George Floyd case had overtaken the Brooks case, with Floyd becoming the indispensable, primary holy social justice martyr of the moment.  The thrust of that brief update was the electoral defeat of District Attorney Paul Howard, whose charging of officer Garrett Rolfe was a vain, racist attempt to hang onto his position of power and corruption.  His opponent, and the current DA, Fani Willis, was very critical of Howard’s action in the Brooks case, but has yet to dismiss charges.  Fox5 in Atlanta provides a bit more information:

It appears Fulton County will have its first new district attorney in nearly two decades. Incumbent Paul Howard was beaten by more than 45 percentage points Tuesday in a runoff against Fani Willis.

It appears even D/S/C parts of the country have a limit on the corruption they’re willing to abide.

Howard recently came under fire after the FOX 5 I-Team uncovered the Georgia Bureau of Investigation was looking into allegations that Howard used grant money from the City of Atlanta to nonprofits under his control. One of those non-profits paid Howard at least $140,000 in city grant money. He agreed to pay a $6,500 state ethics fine for failing to disclose his role as a CEO for two non-profits.

The GBI was investigating the way grand jury subpoenas were issued by Howard’s office in the Rayshard Brooks murder case.

In addition, three past or present female employees have filed lawsuits alleging harassment or discrimination.

Those issues have yet to be resolved.

Challenger Fani Willis, who worked in Howard’s office for 16 years and has also been a defense attorney and a judge, raised more money and snagged key endorsements. She received the most votes in the primary but failed to get more than 50%, the necessary threshold to avoid a runoff in the three-way race.

There was no republican running, so Willis won the election.  Rather than do the right thing and dismiss the charges, Willis tried to pass the buck, as WRDW.com reports:

The Georgia attorney general tells Fulton County District Attorney Fani Willis he won’t approve her request to transfer the Rayshard Brooks case out of her district.

Yes he did—see Update 6—which should have caused Willis to dismiss all charges, but she’s Black, this is Atlanta, it’s 2021 in America and race is everything.

‘Matters that are personal to your predecessor in office do not pertain to you or your office. Therefore, from the concerns raised in your letter, it appears abundantly clear that your office is not disqualified from these cases by interest or relationship.’

Your serve, Willis.   And then, in early May:

A fired Atlanta police officer who shot Rayshard Brooks last June was reinstated by the city’s Civil Service Board.

‘Due to the City’s failure to comply with several provisions of the Code and the information received during witnesses’ testimony, the Board concludes the Appellant was not afforded his right to due process,’ the board stated of Garrett Rolfe. ‘Therefore, the Board grants the Appeal of Garrett Rolfe and revokes his dismissal as an employee of the APD.’

The ruling, however, won’t get Rolfe back to work, as he is facing a felony murder charge over Brooks’s death and his bond prevents him from possessing a firearm.

‘He’d essentially be on administrative leave pending the outcome of the charges against them,’ Rolfe’s attorney Lance LoRusso said.

Ah!  So firing an officer long before an investigation has been completed isn’t—what’s the word?–Legal?  That’s the one.  I suppose we should all be grateful for this, grateful social justice did not prevail, at least in administrative law. 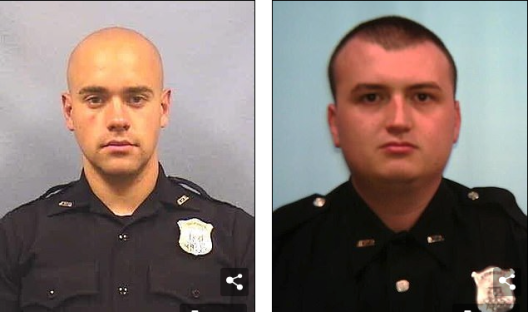 In a recently filed motion to ease bond restrictions, Atlanta police officer Garrett Rolfe’s attorney cites details from the GBI probe into last June’s shooting of Rayshard Brooks that contradict assertions by the former district attorney who charged the 27-year-old officer with murder.

The bulk of the GBI’s findings remain unavailable to the public, and this is the first public disclosure of any details of its investigation. The agency investigates virtually every police shooting in the state and, while it makes no determination of guilt or innocence, the GBI’s findings carry considerable weight with prosecutors.

That motion may be found here.  The motion exposes many of former DA Howard’s lies about the case.  Some excerpts:

On  January  25,  2021,  pursuant  to  OCGA  §15-18-5,  Fulton  County  District  Attorney  Fani  Willis disqualified  her  office  from  handling  the  case  against  Officer  Rolfe.    However, the  Attorney General,  Christopher  Carr,  informed  District  Attorney  Willis  that her  reason  for  disqualification  is not  valid  and  therefore  he  rejected  her  request  to  appoint  a  new  prosecutor.    Thereafter,  District Attorney  Willis  filed  a  special  appearance,  indicating  that  she  is  ethically  prohibited  from  working on  this  case.2    As  this  issue  remains  unresolved,  there  is  currently  no  unconflicted  prosecutor assigned to handle this case.

This, gentle readers, us highly unusual, and is surely the result of a racist DA pushing for social justice—and his own reelection—rather than upholding the law.   This is what happens when cities elect a Black DA rather than a DA who happens to be Black.

Officer Rolfe understands  that  many  people  arrested  for  murder  are  held  without  bond until  trial.   However,  it  is  rare  that  a  person  is  arrested  for  murder,  without  any  law  enforcement  investigation, at  the  direction  of  the District  Attorney  who  conducts  a press  conference  that  not  only  violates  the Georgia  Rules  of  Professional  Conduct,  but also  misinforms  the  public  as  to  the  facts  of  the  case, uses  the  arrest  as  part  of  his political  campaign,  ends  up  being  investigated  by  the  GBI  for  his misuse  of  Grand  Jury  subpoenas  in  this  case,  gets  voted  out  of  office,  and  creates  such  an  ethical mess,  that  the  newly  elected  District  Attorney  decides  to  disqualify  herself  from  the  handling  of the case.

I suspect Willis wants to be disqualified because she knows the only ethical, lawful, thing to do is dismiss all charges.  She surely doesn’t want to be tarnished with Howard’s corruption.  However, she too is Black, and doesn’t want to face mob justice for upholding actual, rather than, social, justice.  Here are some interesting facts from the GBI report that have been, to this point, unknown (emphasis mine):

(1)  Paul Howard stated that Rayshard Brooks was ‘slightly  impaired’  on the night of the incident.   However, GBI crime lab toxicology reports indicate that Rayshard Brooks was under the influence of alcohol and drugs.    Specifically,  his blood alcohol concentration was .102, and drug tests [higher than the legal limit] indicate that his blood contained eutylone [a “designer” drug stimulant] or  an isomer of eutylone, cocaine, cocaethylene [a metabolite of cocaine], benzoylecgonine [an other cocaine metabolite], and midazolam [an anesthetic/despressant].

In other words, Brooks was not only legally drunk, he was high on coke, a stimulant, and a depressant.

(2)  Paul Howard said  he ‘examined’ the two tasers involved inthis  case.    However, he conveniently left out the fact that even after Rayshard Brooks fired  the second taser cartridge at Officer Rolfe (having fired the first cartridge at  Officer Brosnan), Mr. Brooks pulled the taser trigger three additional times, indicating his intent to harm Officer Rolfe.

(3)  Paul Howard alleged that Officer Rolfe failed to provide proper  medicalattention to Rayshard Brooks, and this allegation was repeated to  this Court during the bond hearing by his Assistant District Attorneys.    However, no eyewitness interviewed by the GBI supports this claim. In fact, the  GBI investigative report indicates that several eyewitnesses stated that Officer  Rolfe rendered medical aid to Mr. Brooks.

(4)  None of the eyewitnesses interviewed by the GBI stated that Officer Rolfe  said, ‘I got him’  as alleged Paul Howard to the public and his Assistant District Attorneys to this Court.

(5)  None of the eyewitnesses interviewed by the GBI stated that they saw Officer Rolfe kick Rayshard Brooks as alleged by Paul Howard to the public and his  Assistant District Attorneys to this Court.    Additionally, based on a review of  the videos, the GBI concluded that it appeared.  Officer Rolfe ‘was stepping over’ Rayshard Brooks, not kicking him.

I suspect there is much more in the complete GBI report, but even this much prosecutorial misconduct should be sufficient to dismiss the charges.  Of course, in the current, racialized climate in Atlanta and across much of America, no court would be likely to do actual justice if it means clearing a white police officer in the shooting of a Black felon.  If the assistant DAs lied to the court, as the motion alleges, they should be facing sanctions.  Back to the motion:

In  sum, many comments made by Paul Howard and his Assistant District Attorneys were patently false.   These false statements presented an  inaccurate picture of this case to this Court, an inaccurate picture of Officer Rolfe  to this Court, and an inaccurate picture of the OCGA §17-61(e) factors to this  Court.  On the other hand, the GBI investigative report reflects the reality and accuracy of what was argued to this Court on Officer Rolfe’s behalf.  That, Officer Rolfe acted in accordance with state law and his training, that he was legally  justified in using deadly force, that he  is not a risk of flight, that he is not a  danger to the community,  that he is not a danger to commit additional crimes,  and that he is not a danger to violate any of the other OCGA  §17-6-1(e) factors.  Now that the independent investigation by the GBI has been completed and Paul  Howard is no longer around to misinform the public and this Court about the facts  of this case, it is time for this Court to re-examine the conditions of bond imposed on Officer Rolfe.

Final Thoughts:  So now we know former DA Paul Howard–and possibly some of his assistant DAs–committed all manner of prosecutorial misconduct, denying Rolfe due process.  Not only that, he lied to the public and the court about material facts of the case.  We can be certain the Biden/Harris/Whoever racist Department of Justice will pursue the officers involved like hounds from Hell, regardless of the local outcome.

The Wendy’s where Brooks passed out, caught up in a “mostly peaceful protest.”

And what might that outcome be?  Surely, the only actually just outcome would be the complete dismissal of all charges.  Will that happen?  It appears the Atlanta justice system is taking a holiday.  No one wants to touch this one.  That’s not only incompetent but foolish.  Nothing less than Rolfe’s blood will satisfy the BLM/Antifa/DOJ mob.  Should charges be dismissed, it will not matter whether it’s done tomorrow or a year from now.  The results—“mostly peaceful protests”—will be the same.

In the meantime, during this holiday from justice, we might contemplate how we’ve come to allow Marxist thugs to so control and derange our justice system and to shake the foundations of the Republic.  Rayshard Brooks is no martyr.  He’s among the last people anyone should emulate.  The same is true of Paul Howard.

Americans are becoming tired, very tired, of being called racist, particularly when its on behalf of Marxist sedition and race hustling, all to the detriment of actual public safety and the rule of law.

3 thoughts on “The Rayshard Brooks Case, Update 8: Public Safety And The Rule Of Law”