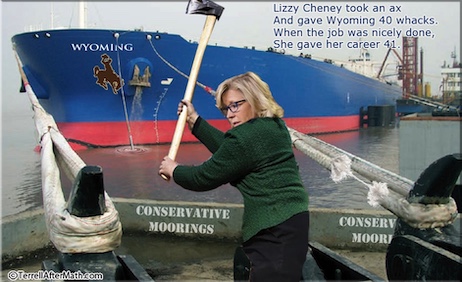 The continuing saga of Wyoming representative Liz Cheney is—continuing.  As regular readers know, I’ve been writing on Cheney’s bizarre attacks on fellow Republicans, particularly Donald Trump, since February of 2021.  To find all SMM articles on Cheney, merely enter “liz cheney” into the SMM homepage search bar.  In my most recent article I wrote, in part:

Uh-huh.  Let me see if I understand this.  Daring to suggest the presidential election wasn’t entirely fraud-free is dangerous.  Cheney wants to know “the truth” about what happened on January 6, but not what happened regarding the election, because that would be ‘dangerous.’  But she has to give some sop to the rubes back in Wyoming, so Pelosi’s ‘Commission’ ought to be bipartisan, you know, just to make everything fair and stuff.

As one of the rubes back in Wyoming, I thought it time to bring Wyomingites, and other Americans, up to date on Cheney’s downward slide to inevitable electoral defeat.  As Brietbart.com reports, Cheney recently attacked Jim Banks (R-IN) as “neo-marxist.”

Banks wrote a letter to House Republican Leader Kevin McCarthy (R-CA) in March, charging that House Republicans must embrace issues important to working-class voters if they wish to take back the House majority during the 2022 midterm elections.

‘President Trump gave the Republican Party a political gift: we are now the party supported by most working-class voters,’ the Hoosier Republican wrote in the memo. ‘The question is whether Republicans reject that gift or unwrap it and permanently become the Party of the Working Class.’

However, not all members of the House Republican Conference agree with Banks’ sentiment.

During a call with the Congressional Institute last week, Cheney rebuked the call for making the Republican Party the party of working-class voters.

‘Cheney argued the GOP is not the party of class warfare and that dividing society into classes while attacking the private sector is neo-Marxist and wrong,’ Politico’s Melanie Zanona wrote.

The Banks memo is here.  By all means, take the link and read it.  It’s an entirely unremarkable, rational suggestion that Republicans realize working Americans support rational, America-first policies, and Republicans would be wise to do the same if they want their votes.  He’s suggesting Republicans ought to court the people that are most likely to vote for them.  Liz Cheney sees this as Marxist class warfare.  Wyomingites don’t.

I’m sure, like D/S/Cs, Cheney is shaking in horror about what the forensic audit of votes in Maricopa County, AZ might reveal.  Breitbart.com has the story:

Representative Liz Cheney (R-WY) said Sunday on CBS’s ‘Face the Nation’ that the 2020 presidential election was not ‘stolen’ from former President Donald Trump.

Hmmm.  Where have I heard that kind of language before?  Oh, right.  It’s standard, false D/S/C talking points.  Gropin’ Joe Biden used it at his faux-SOTU speech. 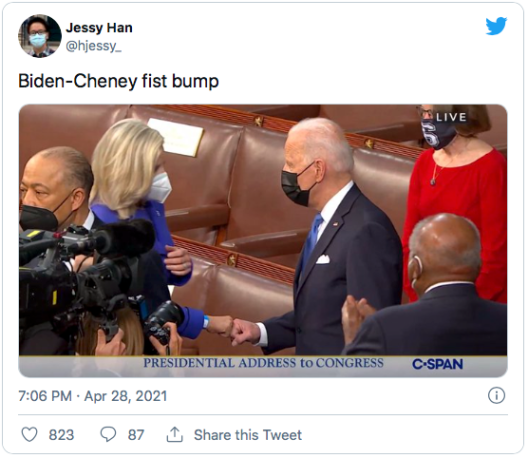 Ah.  That would be the judiciary that refused to take the case?  The one that never allowed discovery or examined any of the evidence, on every level up to and including the Supreme Court?  I’m still trying to understand why Cheney is helping D/S/Cs with the “insurrection” lie.  Is it Trump Derangement Syndrome, or is she really a D/S/C in Republican clothing?  Of course, once one is infected with TDS, there’s really little difference, and very little hope for recovery.

And speaking of lies, The Federalist explains Cheney’s role in keeping alive another outrageous D/S/C lie: 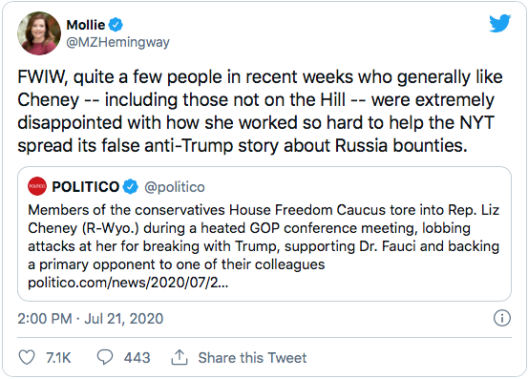 U.S. intelligence agencies debunked on Thursday what was treated as blockbuster election-year reporting last summer of an anonymously sourced story in The New York Times claiming the Kremlin placed bounties on American troops in Afghanistan. 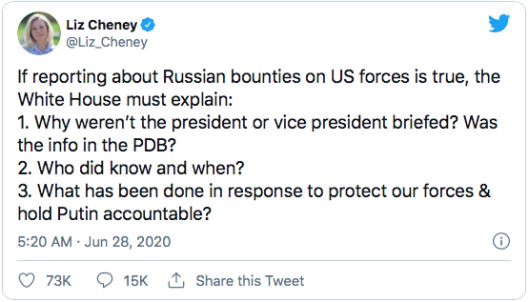 US Intelligence agencies have been revealed as entirely compromised arms of the D/S/C Party.  When you’ve lost them… But Cheney doesn’t give up easily.  In fact, she’s thinking about running for President, apparently on the Republican(?!) ticket, as PJ Media reports:

Less Than Zero isn’t just one of the best ’80s movies about affluent Hollywood teenage angst, it’s also the exact amount of concern Insanity Wrap can muster for Congresscritter Liz Cheney’s (R-Wyo.) hint about maybe running for president in 2024.

Dubbed ‘Lincoln Project Liz’ by Donald Trump Jr., the scion of a double-Bushie holdover doubled down to the Post on her ‘insurrection’ accusation about the January 6 Capitol Building riot.

‘I think we have a huge number of interesting candidates,’ she told the Post, “but I think that we’re going to be in a good position to be able to take the White House. I do think that some of our candidates who led the charge, particularly the senators who led the unconstitutional charge, not to certify the election, you know, in my view that’s disqualifying.’

It was constitutional and has been used semi-regularly by Democrats to try and taint incoming Republican presidents.

So, apart from getting the facts and analysis wrong and weakening her party’s chances in 2024, Cheney is right on the money.

After all that, Cheney has a pony’s chance in an industrial turbine of winning the GOP nod.

It is without guile or snark that Insanity Wrap asks you: Who the hell is ruling in a Liz Cheney presidential run?

Who indeed?  No one I know in Wyoming.  Donald Trump, via Breitbart, provides enlightenment:

‘Liz Cheney is polling sooo low in Wyoming, and has sooo little support, even from the Wyoming Republican Party, that she is looking for a way out of her Congressional race. Based on all polling, there is no way she can win,’ Trump said in a statement. ‘She’ll either be yet another lobbyist or maybe embarrass her family by running for President, in order to save face. This warmongering fool wants to stay in the Middle East and Afghanistan for another 19 years, but doesn’t consider the big picture—Russia and China!’

That had to leave a mark.  And once more from Breitbart, Sen. Josh Hawley also comments on Cheney’s apparent presidential aspirations: 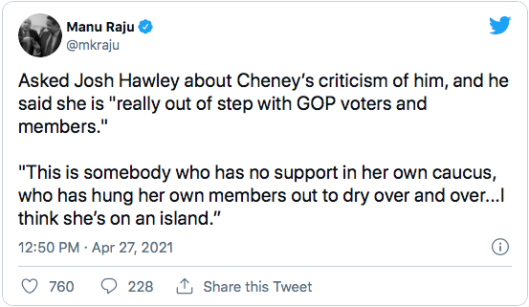 Since voting in favor of Trump’s second impeachment in February, Cheney has repeatedly called for the Republican Party to move on from the former president despite his popularity with GOP voters.

Cheney recently ruled out supporting Trump if the former president opts to run in 2024 and is leaving the door open to mount her own campaign.

‘I’m not ruling anything in or out — I’ve been here a long time,’ Cheney said in an interview with The New York Post when asked about a possible run. 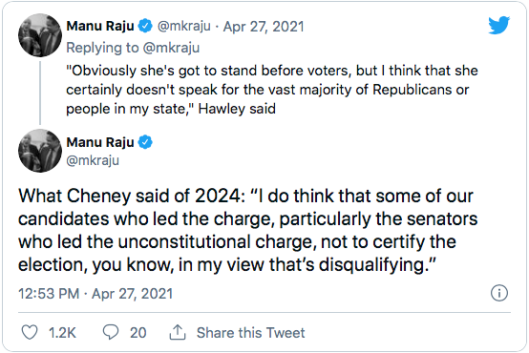 Final Thoughts:  The more I hear from Liz Cheney, the more I realize she’s entirely out of step with Normal Americans.  I’m also puzzled about how she could possibly imagine she could be competitive—in the Republican Party—in the 2024 presidential race.  One doesn’t normally lose their own state–Wyomingites are looking forward to legitimately voting her out of office–and expect to ascend to the White House, and right now, Cheney couldn’t win a race for dog catcher in Wyoming.

One need not be a fan of Donald Trump to reasonably believe the 2020 presidential election was not honestly conducted.  Asking that the highly suspicious contests in the “battleground” states be fairly and lawfully reviewed is not in any way unconstitutional, nor does it represent “insurrection.”  Perhaps Cheney might want to consult a dictionary, or better yet, Federal law, such as 18 USC 2383:

Whoever incites, sets on foot, assists, or engages in any rebellion or insurrection against the authority of the United States or the laws thereof, or gives aid or comfort thereto, shall be fined under this title or imprisoned not more than ten years, or both; and shall be incapable of holding any office under the United States.

It’s rather difficult to reconcile that text with the entirely lawful efforts of Normal Americans to watch vote counting, or afterward, to petition the courts for redress.  Lawfully asking the courts to do their jobs is insurrection?  Not according to federal law.  Not for people not caught up in terminal Trump Derangement Syndrome.  Showing up at the Capital, unarmed, to ask the Congress to do its job is insurrection?  Not under the law, yet Cheney continues to slander Normal Americans and in so doing, helps D/S/C efforts to brand them as terrorists and deprive Americans of their liberties.

Wyomingites, and other Americans, are more than smart enough to know who truly represents them and supports the Constitution.  It’s not Liz Cheney. 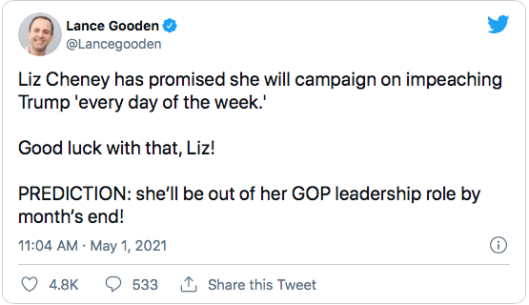