NOTE:  Upon occasion, I postpone my weekly, Monday education article in favor of other timely articles.  So much is going on that has the potential to dissolve the republic, this is one of those times.  I’ll return with those education articles in the near future–hopefully.

It has been some time, gentle readers, since I’ve posted one of these articles.  The stupid is overwhelming, so once again, it’s time.  Yes, in the header, we see Gropin’ Joe Biden going off script and offering to take questions from Nancy Pelosi, which confused her–not difficult to do–left a few seconds of very uncomfy dead air and caused Biden’s handlers to shut him off within seconds.  Now we move on to Biden’s nominee for Secretary of the Interior, one Deb Haaland, who is amazingly stupid, and whose primary qualification seems to be she’s an Indian, of some sort [she was confirmed–of course–shortly after this was written]: 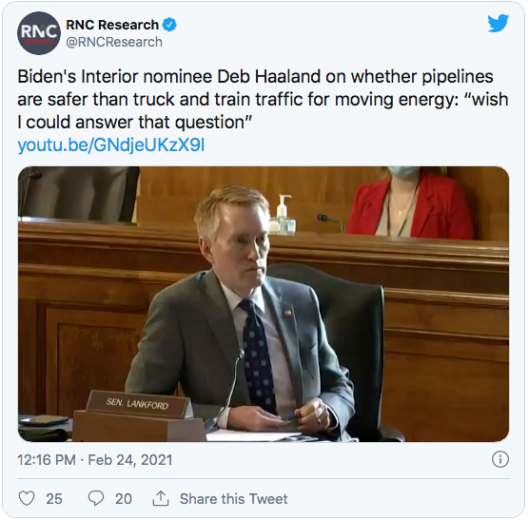 AOC is a never-ending source of example/amusement for this series:

By now, you’ve heard of the canceling of Pepe Le Pew, the cartoon skunk, ostensibly for sexual harassment.  What you’re not being told, what the wokesters don’t want you to know, is the plot device upon which every Le Pew cartoon hangs is the female he’s chasing isn’t a skunk; she’s a cat.  Her recognition that Le Pew is a skunk, and his failure to recognize she’s not a skunk, is what makes the cartoon funny.   It’s not an inherently sexist cartoon.  She wants to get away from him because he’s a skunk!  His amorous pursuit is merely the vehicle used to pursue the inherent tension in the plot device.  If he were a cat, she might be happy to return his advances–woman are sexual beings too.  But of course, humor is no longer allowed…

This one is particularly good, from PJ Media:

According to Bongino.com, ‘a report issued by Special Inspector General for Afghanistan Reconstruction noted that even though the United States spent more than $787 million dollars on ‘gender equality projects’ in Afghanistan since 2002, ‘harmful socio-cultural norms’ kept them [from] making major progress.’ There have been a lot of people around since 2002 who could have told the political elites that spending $787 milllion, or even $1, on ‘gender equality projects’ in Afghanistan would be a fruitless waste of money, but they have not been heeded, and indeed have been dismissed as ‘Islamophobes.’ And now, despite the persistence of those ‘harmful socio-cultural norms,’ those millions are almost certainly going to continue to flow into the ‘graveyard of empires.’

The Bongino report noted mildly that ‘restrictive sociocultural norms and insecurity…continue to impede progress for Afghan women and girls.’

Among these are the fact that ‘girls’ access to education is constrained by the lack of female teachers and infrastructure, and pressures on girls to withdraw from school at puberty’; there is ‘a lack of female healthcare providers’; and ‘gender disparity is still a persistent characteristic of the Afghan labor force.’

Hmmm.  Could the fact Islam sees women as vastly inferior to men and treats them like cattle have anything to do with it?  I can hardly wait to see how much money the Harris Administration wastes on “trans equality projects” in Afghanistan.  Oh, and this is what our military is doing over there?  Tucker Carlson, on Tucker Carlson Tonight on 03-05-21 noted at a meeting of the Joint Chiefs of Staff discussing removing our troops from Afghanistan, the Chairman emotionally said we can’t leave because it would hurt women’s rights.  For this, our soldiers risk their lives.  Take the link and read the whole thing. White House press secretary Jen Psaki said Tuesday now is ‘not the time’ for Latin American parents to send their children north to the U.S. border.

‘Parents should not be sending their kids north right now?’ one reporter asked Psaki. ‘Absolutely not. This is not the time to come– we’ve not had the time to put in place an immigration system, an immigration policy,’ she replied.

‘We don’t have the processing we need at the border, obviously we’re continuing to struggle with facilities to ensure that we’re abiding by Covid protocols,’ Psaki continued.

Which is why they’re releasing Covid-positive illegals into the country.  This one had to leave a mark, and no one is more deserving: 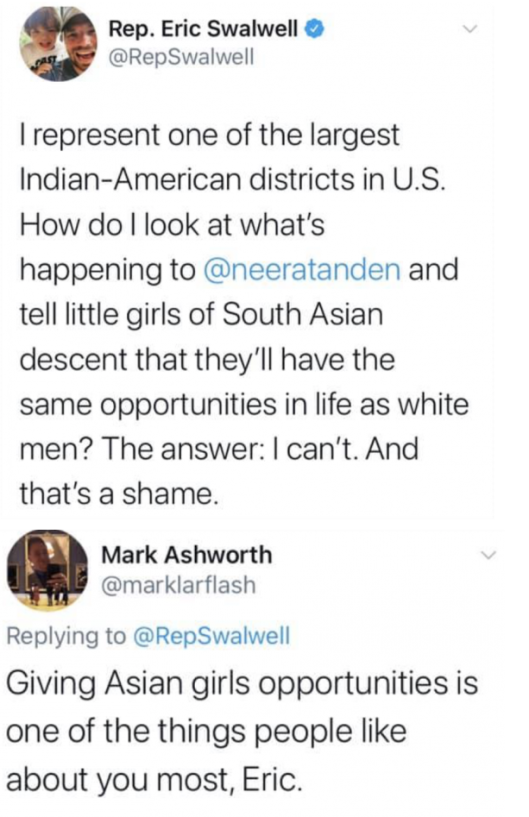 Why aren’t we picking the pockets of people who had nothing to do with slavery to give trillions to people who were never slaves?  Fox explains:

The former president claimed that a reparations proposal didn’t make its way through the lawmaking process during his presidency due to ‘the politics of White resistance and resentment.’

‘And what I saw during my presidency was the politics of White resistance and resentment. The talk of ‘welfare queens’ and the talk of the ‘undeserving’ poor. And the backlash against affirmative action,’ Obama said.

‘All that made the prospect of actually proposing any kind of coherent, meaningful reparations program struck me as, politically, not only a nonstarter but potentially counterproductive.’

Obama went on to say it was ‘perfectly understandable why working-class White folks, middle-class White folks, folks who are having trouble paying the bills or dealing with student loans, wouldn’t be too thrilled’ about the prospect of ‘a massive program that is designed to deal with the past but isn’t speaking to their future.’

Yeah, but up yours racists!  Thank God for term limits.

D/S/Cs biggest concern in life is “Donald Trump’s supporters?!”  But what about Normal Americans? 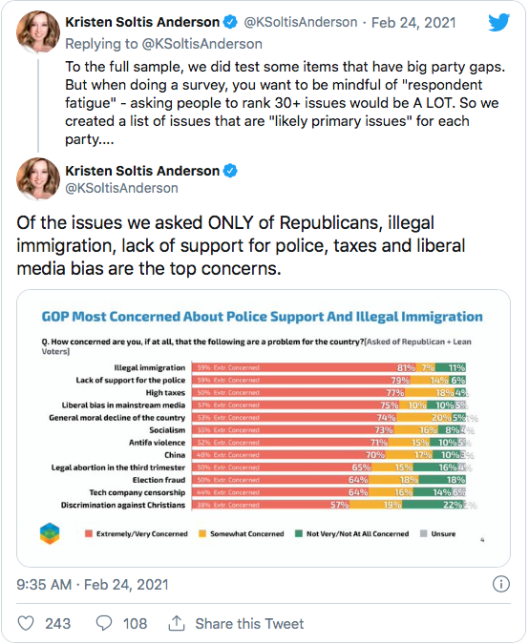 Hmmm.  In other words, the difference is between Lala Land and reality.

If you believed any of this, you’re definitely too stupid to surive:

*Joe biden was not going to ban fracking.

*When Joe Biden says he was going to take your guns, he didn’t really mean it.

*Joe Biden really wants to unify the country, which he loves.

*Joe Biden is a moderate.  When he said he was going to have the most progressive administration in history that was just Joe’s folksy way of expressing moderation.

*Joe Biden said he had a plan to eliminate Covid-19.

The Hill also went weak in the knees over the Vice President Kamala D. Harris.

‘Vice President Kamala Harris is the star of a viral video after being spotted jogging the stairs at the Lincoln Memorial as a Secret Service agent was seen trying to catch up with her,’ the piece said. ‘In the short clip, Harris jogs down and then up the steps at the national memorial. And during her jog, a man in a suit identified by local media as a Secret Service agent could be seen apparently trying to keep up with the vice president, who was noticeably moving faster than him.’

Yes, the 56-year-old woman was even faster than a highly trained and conditioned agent who has risen to the top of the service to serve in the presidential protection division.

Of course she was/is.  She’s the first Black/Indian/whatever/female president-in-waiting. Another of Biden’s cabinet picks is a real winner: 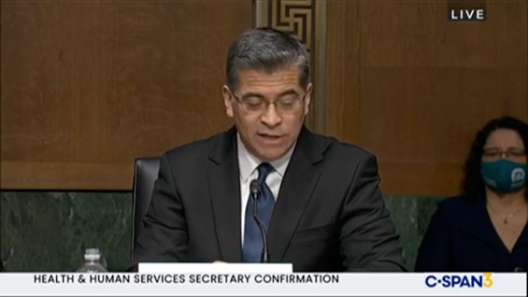 ‘I have never sued any nuns. I have taken on the federal government, but I’ve never sued any affiliation of nuns, and my actions have always been directed at the federal agencies because they have been trying to do things that are contrary to the law in California,’ Becerra said in response to a question from Sen. John Thune (R., S.D.). ‘It’s my job to defend the rights of my state and uphold the law.’

Becerra took legal action on a number of occasions over the course of his tenure as California attorney general that resulted in him facing off against the Little Sisters of the Poor, a Catholic order of nuns. The legal conflicts involved the Affordable Care Act’s contraceptive mandates, which the Little Sisters objected to in court.

So, Becerra was telling the truth, other than lying about suing nuns?  Right.  Some people are entirely incapable of learning from bad experiences, as The Free Beacon reports: 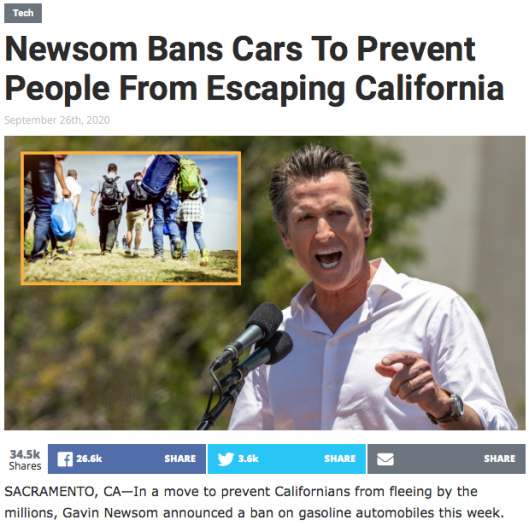 California governor Gavin Newsom held an indoor bill-signing ceremony at a restaurant that is unable to offer indoor dining under the Democrat’s coronavirus restrictions.

Newsom signed a $7.6 billion relief package Tuesday at Solomon’s Deli, a Sacramento-based eatery located just steps from the state capitol. While the Democrat addressed reporters maskless from inside the deli, Sacramento County restaurants are at least two weeks away from being allowed to reopen for indoor dining. Newsom also chose to hold the event indoors despite the fact that Solomon’s advertises outdoor seating and a heated patio. Sacramento residents enjoyed sunny weather with temperatures near 60 degrees during the event.

And we learn, yet again, thinking kids belong in school is racist:

On Tuesday night, the La Mesa-Spring Valley [California—where else?] School Board held a meeting to adopt a plan to reopen schools after almost a year of COVID-19-related closures. Most of the school board members and the superintendent debated reopening, but the board vice-president attacked the very idea of a reopening plan, comparing it to slavery and claiming that such a plan smacks of a ‘very white supremacist ideology.’

Chardá Bell-Fontenot, the board vice-president, dismissed the fact that most families who answered a school reopening survey would like to come back to school. She complained that the other school board members allegedly disrespected her, and she repeatedly resorted to accusations of racism.

Uh, white supremacy is the only reason parents want their children in school?  This is going to be a biiiiig surprise:

It never was about the virus: After a year of job-destroying lockdowns and the inhuman muzzling of every citizen in a panicked effort to slow the spread of COVID-19, a careful review of the data continues to show what was obvious as early as September 2020: Those authoritarian government edicts did nothing to stop or even slow the spread of the coronavirus.

Which is why we have to wear three masks and stay locked down forever, and the governors of any state that don’t agree are Neanderthals.  What edition of TSTS would be complete without Gov. Gretchen Whitmer of Michigan? 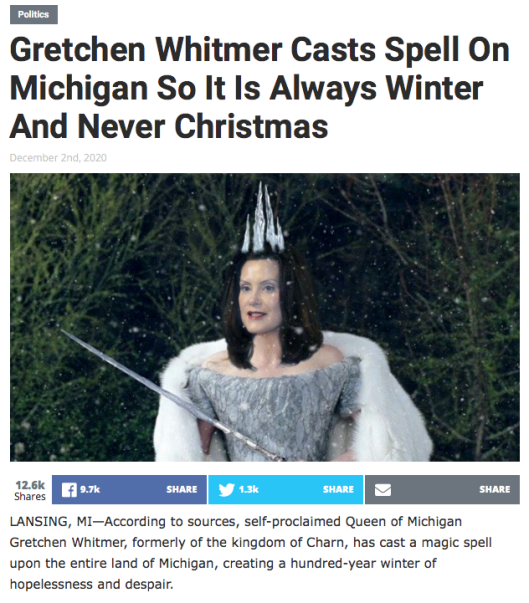 Michigan Governor Gretchen Whitmer has stood out as one of the most vocal opponents of Enbridge Inc.’s Line 5 project, which is the state’s main source of home heating fuels. Now, however, she’s declared a state of emergency amid a bitter cold snap in her state – and is warning that a spike in energy demand for home heating fuels like propane has put a strain on state-wide distribution.

Enbridge Inc.’s Line 5 pipeline delivers about 65 per cent of the propane consumed in the state’s upper peninsula, and 55 per cent of Michigan’s total supply.

Last November, Whitmer moved to revoke the pipeline’s permit, arguing the project – especially a section running beneath the Great Lakes through the Strait of Mackinac – presents an ‘unreasonable risk’ to the state.

Right.  Particularly compared to transporting it by rail or truck.  The D/S/C Party doesn’t care for God?!  No!  Say it ain’t so!

Last Thursday, as the House of Representatives debated H.R. 5, the Orwellian “Equality Act,” a seemingly exasperated Rep. Jerry Nadler (D-N.Y.) arguably revealed the true nature of his party’s radical legislation. In response to Rep. Greg Steube’s (R-Fla.) speech quoting the Bible, Nadler declared that ‘what any religious tradition describes as God’s will is no concern of this Congress.’

Well, no concern to D/S/Cs, to be sure.  It’s never a good idea to taunt God.  Some things tend to come back to haunt us—note the date:

I’ve been wondering that myself…

Too stupid to survive…