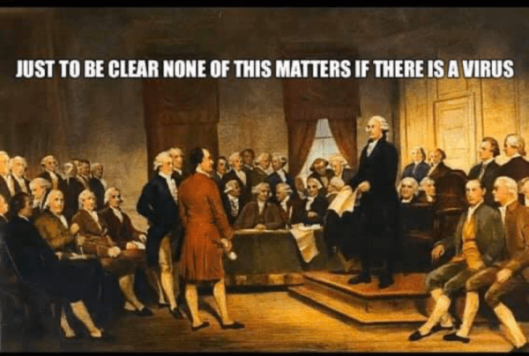 May 25 to September 17, 1787, Independence Hall, Philadelphia.  The indispensable man, George Washington, was unanimously appointed the presiding officer.  Apart from a short speech on the necessity of secrecy that first day, he did not speak again.  His mere presence lent the necessary solemnity and dignity to the proceedings.

We know what happened because James Madison took voluminous notes.  Few Americans have studied the Constitutional Convention, so they don’t know the bargaining that was necessary.  Among the most important bargains was investing in the state legislatures the sole power to conduct elections within their borders.  Absent placing that power close to the people rather than in DC, America would not have been created.  This scheme has worked, preserving our republic, until the 2020 presidential election.  Now, the D/S/C Congress, in the pursuit of raw, never-ending power, will finish the destruction of the republic.

This is a possibility I addressed in The Second Civil War, #18: Three Paths:

Perhaps I’m wrong.  Perhaps D/S/Cs will not do everything they have been telling us, for years, they intend to do.  Perhaps they will suddenly develop a new appreciation for the sanity, peace and prosperity the Constitution, unique in all the world and in all of history, alone provides.  Perhaps they will rediscover a new appreciation for the Founders and for avoiding the tyranny of the majority.  Perhaps they will embrace Normal Americans as worthy of human dignity and rights, but that’s going to be difficult for people who consider them sub-human racists and morons.  More likely, we’re about to experience, good and hard, the unity of tyranny.

Americans that love liberty and the rule of law have much to consider.  This, however, is certain: Americans will not surrender liberty, and those that would take it, are probably too stupid and arrogant to exercise restraint, just as those tyrants that have taken on America in the past were too stupid and arrogant.  All came to grief.

If Americans are forced into a corner, if they have no constitutional means for a peaceful redress of grievances, they’ll do what Americans have always done: destroy their oppressors and restore liberty.  In that, we can take hope.  For the foreseeable future, however, it’s up to D/S/Cs to chart America—and the world’s—path.

The vehicle for the final assault on liberty is H.R.1, the “For The People Act.”  It has passed the House on a party line vote; only a single D/S/C voted against it.  Not a single republican voted for it.  The editors of National Review explain the damage it will do:

It would be an understatement to describe H.R. 1 as a radical assault on American democracy, federalism, and free speech. It is actually several radical left-wing wish lists stuffed into a single 791-page sausage casing. It would override hundreds of state laws governing the orderly conduct of elections, federalize control of voting and elections to a degree without precedent in American history, end two centuries of state power to draw congressional districts, turn the Federal Elections Commission into a partisan weapon, and massively burden political speech against the government while offering government handouts to congressional campaigns and campus activists. Merely to describe the bill is to damn it, and describing it is a Herculean task in itself.

The first target is to wipe out state laws that allow voters to be checked against a preexisting list of registrations. H.R. 1 mandates that states provide same-day registration and allow people to change their name and address on the rolls at the polling place on Election Day, then forbids states from

treating their votes as provisional ballots that can be checked later. It mandates online registration without adequate safeguards against hackers. It mandates automated registration of people who apply for unemployment, Medicaid, Obamacare, and college, or who are coming out of prison. The bill’s authors expect this to register noncitizens: They create a safe harbor against prosecution of noncitizens who report that they have been erroneously registered.

This is why Biden’s handlers have thrown open our borders.  Get illegals into the country, and then let them vote early and often.

H.R. 1 bars states from checking with other states for duplicate registrations within six months of an election. It bars removing former voters from the rolls for failure to vote or to respond to mailings. Outside election observers are an important check on the system; H.R. 1 bars anyone but an election official from challenging a voter’s eligibility to vote on Election Day — thus insulating Democrat-run precincts from scrutiny.

State voter-ID laws are banned, replaced simply by a sworn voter statement. The dramatic expansion of mail-in voting during the COVID pandemic is enshrined permanently in federal law. States are banned from the most elementary security methods for mail-in ballots: They must provide a ballot to everyone without asking for identification and may not require notarization or a witness to signatures. States are compelled to permit ballot harvesting so long as the harvesters are not paid per ballot. Curbside voting, ballot drop boxes, and 15 days of early voting are mandated nationwide, and the bill micromanages the location and hours of polling stations, early voting locations, and drop boxes.

States are compelled to accept voter registrations from 16-year-olds, although they still cannot vote before turning 18 (an amendment to mandate that, too, was defeated). Democrats and their political allies, who rely on the youth vote, traditionally expend extensive resources registering young people. The bill shifts the job of signing up young voters to the federal government, which will pay to teach twelfth graders how to register, create a “Campus Vote Coordinator” position on college campuses, and award grants to colleges for “demonstrated excellence in registering students to vote.” This is measured in part by whether campuses provide rides to get students to the polls and whether they encourage both students and the communities around the campus to get “mobilized to vote.”

Restrictions on felon voting in federal elections in many states are overridden. This exceeds Congress’s constitutional authority over the conduct of elections by directly regulating who may vote, rather than how. In fact, the 14th Amendment expressly permits felons to be disenfranchised — as the Supreme Court held in 1974. State elections officials would be effectively banned from running for federal office by recusal requirements.

Restrictions on felon voting in federal elections in many states are overridden. This exceeds Congress’s constitutional authority over the conduct of elections by directly regulating who may vote, rather than how. In fact, the 14th Amendment expressly permits felons to be disenfranchised — as the Supreme Court held in 1974. State elections officials would be effectively banned from running for federal office by recusal requirements.

Not content to remake the American voting system, H.R. 1 takes the drawing of congressional districts out of the hands of elected state legislatures — who have done the job since the Founding — and turns them over to ‘independent’ commissions, while banning mid-decade readjustments of district lines. It also counts inmates as residents of their last address (even if serving a life sentence), a provision aimed at reducing the representation of rural areas where prisons are located.

These are just the warm-ups. H.R. 1’s crackdowns on political speech are at least as extensive and biased as its changes to election law, and some of the provisions on coordination and foreign-related activity are so complex that even election-law experts warn that their impact is impossible to determine. For example, one provision could be read to bar corporations from political activity if they have even a single foreign shareholder. The new anti-speech laws would generate years of litigation, and many of them would likely be struck down by the Supreme Court.

The bill also requires any litigation over its contents to be heard in the DC Courts, among the most leftist courts in the nation.  By all means, take the link and read the entire article.  The NR Editors are quite correct: the bill is grossly unconstitutional, but they are also quite naïve.  Would the Supreme Court strike down this unconstitutional power grab?  The Court has shown little interest in election law, and they know, beyond any doubt, should they strike down D/S/C’s unlawful power grabs, the court will be packed beyond recognition.  Whether they act out of a lack of personal integrity, a lack of courage, or to try to retain at least a voice of sanity and actual justice on a future court gone mad makes little difference.

The purpose of H.R. 1, which also establishes statehood for DC and Puerto Rico, is to establish a permanent, one-party state, akin to California, but even more totalitarian.  But couldn’t Republicans play the same games?  Couldn’t they ballot harvest and use all the other illegal tricks D/S/Cs use?  They could, but it wouldn’t matter.  Who votes doesn’t matter; who counts the votes does.  Should a republican be ahead of a D/S/C, Republican ballots would disappear, and more than enough D/S/C ballots will be “found,” just as they were in the 2020 election.

A republic can function only if the people have faith in the electoral process.  If they believe their votes don’t matter, if there is no longer any constitutional process for the peaceful resolution of grievances, non-peaceful means are the only recourse.

D/S/Cs are desperate to pass H.R.1 in the Senate.  This bill will give us the opportunity to see if any Senate D/S/Cs are still Americans.  D/S/Cs very much want to eliminate the filibuster.  All that is standing in their way is Senator Joe Manchin.

One might be horrified congress critters would pass a bill that is plainly unconstitutional, but they have demonstrated they have no respect for the Constitution.  They care only about ultimate power.  Republicans predict they’ll regain control of the House and Senate in 2022, and the White House in 2024.  Not if H.R.1 passes.  That’s the point of the legislation, to ensure no Republican can ever again be elected unless D/S/Cs allow it for appearance sake.

Tomorrow, I’ll explain a bill that would all but eliminate our police forces.  It’s the next step in the D/S/C’s plot to turn America into a banana republic.  It’s not quite what you might imagine; it’s much, much worse.