Back in May of 2020 I wrote Connecticut Trans: Mean Girls?  It is the story of three Connecticut high school athletes: Alanna Smith, Chelsea Mitchell and Selina Soule, who filed suit against the Connecticut Interscholastic Athletic Conference.  Why? Because that state organization allows biological males—trans females—to compete against girls in high school athletics.  As a result, Smith, Mitchell and Soule have been consistently beaten by boys masquerading as girls, denying them not only athletic titles, but the opportunity to participate in college athletics.

An excerpt from that article:

Consider too this excerpt from the same article, quoting an article by Brian Joondeph in The American Thinker:

‘As an example, let’s look at the 2016 Rio Olympics and compare the men’s and women’s marathon results, the sport mentioned above where a biological male will be competing as a female.

At the last Olympics, the gold medal winner in the women’s marathon ran in a time of 2:24:04. In contrast, the men’s gold medal winner ran 16 minutes faster, finishing in 2:08:44.  Interestingly both winners were from Kenya, born about a month apart in 1984, taking age and ethnicity out of the equation.  More instructive are the finishing times of the other men in the race. If the gold medal winning woman ran in the men’s event, her time would have placed her in 90th place, far away from the medal stand. Conversely, any of the top 89 finishing males would have won a gold medal if competing as a female in the women’s event.’

The article also chronicled the initial stages of the lawsuit in the court of Judge Robert Chatigny, who is clearly biased against the actual females involved.  I noted:

This kind of politically correct nonsense is distressing, but hardly unexpected.  Notice how the judge has prejudged the case.  It’s not about males competing against girls because they can’t beat boys, and because they are boys, but girls who unfairly say “…that transgender girls should not be allowed to run in girls’ events.”  It’s not a matter of biology and physiology, but mean girls that don’t want to run against poor, defenseless, oppressed boys.  D/S/Cs always seek to define the terms of any debate, to label some words and arguments out of bounds, racist or sexist, hate speech in any event, and even unscientific.

Take the link to read the entire article, where you’ll discover the girl’s attorneys have filed a motion to disqualify Chatigny for his blatant bias.  The judge, of course, denied that motion, forcing the lawyers to petition for a writ of mandamus.  Shortly thereafter, the Federal Department of Education Office of Civil Rights filed a letter in support of the girl’s position.  This in addition to a Statement of Interest in support of the girls filed by the Federal Department of Justice in March of 2020, some five months earlier.  All the legal documents in this case may be found at the Alliance Defending Freedom site here.  As this article is posted, the lawsuit remains unresolved, and boys pretending to be girls continue to deny actual girls the fruits of their labor and dedication in Connecticut sports.

We also learn that Judge Chatigny has additional issues indicating his manifest unfitness for presiding over this case.  Penny Nance at The Federalist, explains:

The year was 2010. President Barack Obama was in office, and Democrats controlled the Senate. Obama could practically get any judge he wanted, but he could not get his nominee to the U.S. Court of Appeals for the 2nd Circuit, Robert Chatigny, confirmed based on Chatigny’s track record of favoring sexual predators over women and children. Now this same judge is prejudicing the case against female athletes by imposing a speech code on their counsel.

Judge Chatigny has a very troubling record. As I wrote at the time, serial killer Michael Ross explained in a documentary how he bound 14-year-old Leslie Shelley, stuffed her in his car trunk, and ‘took the other [14-year-old] girl, April Brunais, out, and I raped her and killed her, and I put her in the front seat.’ Ross said he had killed eight women and girls, ranging in age from 14 to 25, and if he hadn’t been arrested, he would still be killing.

Yet Chatigny said Ross ‘never should have been convicted.’ Chatigny suggested that ‘sexual sadism is clearly a mitigating factor.’ So, according to this judge, sexual sadists deserve less time in prison because they are sick.

There is much more to that story. Chatigny’s actions were so egregious that state prosecutors filed an ethics complaint against him.

The judge also has a track record of leniency on sex crimes. In the case of a 27-year-old man who lured a 15-year-old girl online, the sentencing guidelines called for 57-71 months, but Chatigny gave the man only 36 months because he concluded that the subject was remorseful, and it happened only once.

That’s not all. In the 12 child pornography cases Chatigny heard at the time, he sentenced the perpetrator to less than the minimum recommendation in eight. 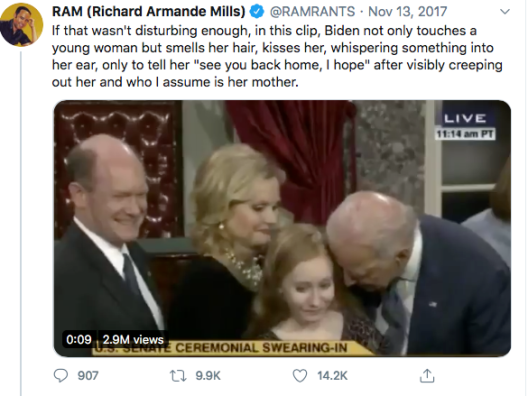 This kind of judicial lunacy should give the sane American pause.  But now, on January 20, 2021, another sexual predator—Gropin’ Joe Biden—on his first half-day of work, wiped away all the good President Trump did in actually restoring the rights of women and girls to be free of men in women’s clothing invading their bathrooms, locker rooms, and sports.  Here’s the justification section from Biden’s executive order:

Section 1.  Policy.  Every person should be treated with respect and dignity and should be able to live without fear, no matter who they are or whom they love.  Children should be able to learn without worrying about whether they will be denied access to the restroom, the locker room, or school sports.  Adults should be able to earn a living and pursue a vocation knowing that they will not be fired, demoted, or mistreated because of whom they go home to or because how they dress does not conform to sex-based stereotypes.  People should be able to access healthcare and secure a roof over their heads without being subjected to sex discrimination.  All persons should receive equal treatment under the law, no matter their gender identity or sexual orientation.

The implementation of this executive order will be extraordinarily destructive, and the D/S/C Party, which has for years been screaming about a Republican “war on women,” has dropped the first nuclear weapons in that war, not on Republicans, but on girls, women, America’s schools, and women’s sports.  “Equal treatment under the law,” for D/S/Cs means trans men get to do whatever they want, and woe to any who even think otherwise.

We do not know what Biden actually thinks—or to what degree he is capable of thinking.  Is this insane and destructive ideology actually a fundamental part of his political philosophy, or he is merely a teleprompter reading, document signing puppet, doing the bidding of his socialist/communist handlers?  Which would be worse for America?

Schools will be forced, under threat of federal investigations, lawsuits and consent decrees, to establish preferential “rights” for trans boys, who will have unrestricted access to any bathroom, locker room, or athletic competition they choose.  Actual girls and their parents will have no rights other than the right to submit.  Some school districts, perhaps even some states, will resist all of this, but in the meantime, the will of the “trans community” will prevail.  Most school districts simply don’t have the money to fight the federal government, and many will welcome this actually misogynistic tyranny.  Biden is certain to eliminate President Trump’s ban on trans military service as well. 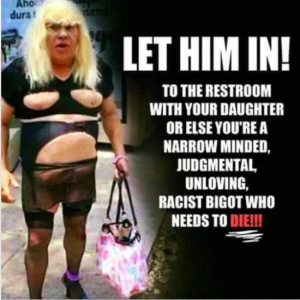 Parents finding the reality of any boy who wants to call himself trans invading the bathrooms, locker rooms and showers of their daughters will have few and expensive choices.  Obviously, they can remove their girls from public schools, thus removing them from athletics, but there is no guarantee a Harris Administration—Biden is merely a temporary placeholder, the bait in a particularly evil bait and switch scam—will not persecute and prosecute private schools to obtain the same perverse ends.

Girls across America can now anticipate the full weight of the federal government will come down on them should they dare to file suit to maintain fairness in girl’s athletics.  Not only with the federal government drop their support of Alanna Smith, Chelsea Mitchell and Selina Soule, they will actively oppose them, and any girl daring to assert a right to fair competition, a right they no longer have.

There is also no guarantee if parents withdrew their daughters entirely from public school/state-organized sports and form entirely private leagues, the government would not litigate and prosecute them out of existence.  Our new masters will brook no dissent in their mania to “unify” us.

Girls will have the choice of entirely withdrawing from organized, school sponsored sports, or resigning themselves to being beaten by boys in female attire, boys whose great courage and superior morality they will be expected to praise.  What sane girl could abide the “guidance” of the kinds of adult educators that support this abuse?

This is nothing short of evil, and will play a role in tearing America apart, which appears to be very much what D/S/Cs intend.  What’s the fun in fundamental transformation if you can’t destroy those you hate along the way?  It begins on the bodies of our young, female athletes.

5 thoughts on “Biden: On The Bodies…”