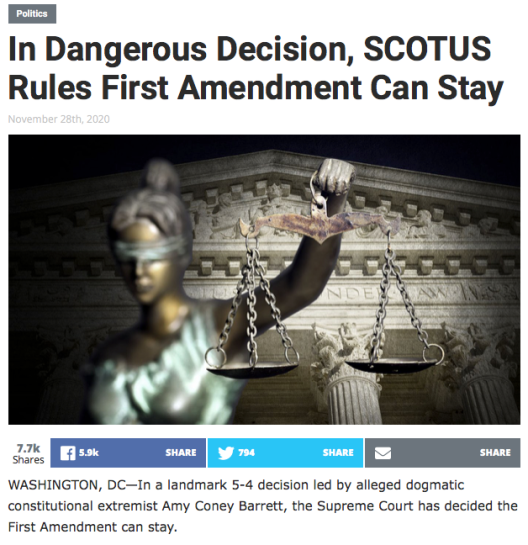 You may have noticed, gentle readers, I’m more or less restraining myself in commenting on the legal maneuvering around the election.  I suppose I’m waiting until we can be reasonably sure who is going to the president—or at least the bait-and-switch president–on Inauguration Day.  To that end, I’m postponing my next education article for a week, perhaps more—we’ll see what this coming week brings—and today, will comment, briefly, on the Texas decision.

As I’m sure you know, the Supreme Court denied the Texas case, saying only Texas lacked standing to bring the case.  Let’s briefly examine three viewpoints. 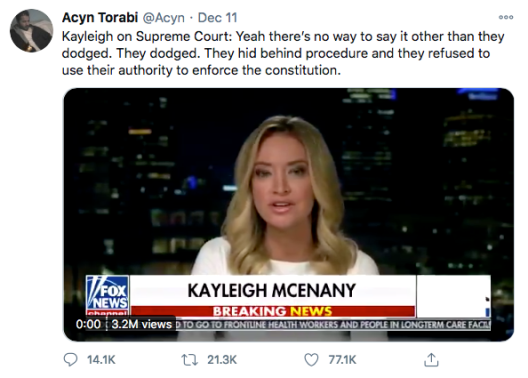 As some legal scholars have argued, no state has standing to challenge the election practices of another.  States are, after all, sovereign under the 10th Amendment.  Let’s ignore for the moment Democrats/Socialists/Communists routinely ignore the 10th Amendment when it’s convenient for them to bulldoze whatever sovereign power the state have, such as when imposing Obamacare, etc.  Actually, it’s virtually always convenient for them to ignore state’s rights.  Hypocrisy, thy name is D/S/C.  Therefore, in any controversy between states, even one that has truly national implications, it is entirely proper, indeed, necessary, for the Supreme Court to ignore that constitutional original jurisdiction nonsense, and let the states fight it out politically.  The Supreme Court shouldn’t sully itself with political controversies, particularly when that would leave some 70 million+ of the country mad at them.  Why, that might cause political consequences to descend on the Court!

Then there is the original jurisdiction argument.  The Constitution gives the Supreme Court original jurisdiction over conflicts between the states because there is no other court with the power to adjudicate them.  That some of these conflicts will be political is a matter of basic logic, therefore, the court should not shy away from them.  In this particular case, Texas and a not inconsiderable number of other states argued that the actions of four states were more than mere differences of politics.  By ignoring not only their own constitutions, but most importantly, the federal Constitution, their fraudulent elections directly impact every state, diluting the legitimate votes of every American and denying Americans equal protection under the law.  They did not demand the Supreme Court decide the election, only that it require the legislatures of those four states to do their political duty and see the elections were conducted under their state constitutions, laws, and the federal Constitution.  Every vote must be equal in effect.  If it is not, no American can be confident in the results of elections, and if that is the case, the very stability of the Republic is threatened.

Let’s take a moment to define terms.  Many are claiming President Trump is trying to ”disenfranchise” voters.  Before various dictionary companies change definitions to conform to D/S/C orthodoxy, let us be comfortable in the certainty that to disenfranchise simply means to deny one the right/ability to vote.   That’s not the problem with this election.  What Mr. Trump, and I suspect about 80 million Americans—that’s probably the number Mr. Trump actually received, not 71 million—are demanding is only legal votes be counted, not illegal votes.  They do not ask that any lawful voter be prevented from voting, or that any lawfully cast vote not be counted.  If one is dead, underage, not a citizen, not registered to vote, does not live in the jurisdiction where they voted, they are not eligible to vote, hence disenfranchisement does not apply.  Those not lawfully eligible to vote cannot be disenfranchised.  The same applies if they vote many times, either by voting in multiple jurisdictions, or because corrupt election officials run their ballot through a scanner 100 times.  The same applies if electronic machines were set to switch votes from one candidate to the other, or were set to give one candidate only .8 of a vote for each vote cast while their opponent got 1.2 votes for each vote cast.

When these things happen, no one has been disenfranchised.  Voters casting lawful votes were allowed to vote.  The problem is many unlawful voters were allowed to cast multiple votes.  Even people who do not actually exist voted, often many times.  We’re talking about state and federal crimes on an unprecedented scale, rampant corruption on a level that could result in the dissolution of our republic, even war.  We’re arguably talking about an equal protection issue, but not an issue of disenfranchisement.

Finally, there is the issue of the Constitution, which gives the sole power to decide how elections are run to the legislatures of the several states.  In this election, state officials unilaterally changed or ignored state election law.  Local election officials did the same, allowing lax standards for mail in ballots—standards that ensured massive fraud–and far more rigorous standards for in person voting.  Everything they did was designed to harm President Trump and help Joe Biden, and it worked, or has worked thus far.  President Trump is not giving up:

But the problem is time.  Those committing election fraud knew time was on their side.  State courts and state Supreme Courts have had it both ways: before the election, no one had standing to bring a case because they couldn’t prove any harm had been done.  After the election, cases were denied because they weren’t brought soon enough.  And some courts dropped cases just because, and there ain’t a damned thing you can do about it, so there, nanner, nanner, nanner.

The Supreme Court may believe it has dodged a bullet.  There is some validity in the argument the Court should not involve itself in political issues.  Let the politicians fight those out.  And perhaps they even believe by avoiding this particular issue, they are protecting themselves, the very institution of the court.

But they may have been too smart by half.  By refusing to uphold the Constitution and demand states follow it in conducting elections, they may have ensured Georgia’s election fraud machine, which worked so well in the general election, receives a massive infusion of electoral steroids for the Senate runoffs, ensuring the fraudulent election of two of the most insane communists to ever be elected in America, and giving complete control of the Congress to D/S/Cs, D/S/Cs that are salivating at the thought of packing the Supreme Court.

If all of this comes to pass, the only thing that might potentially save the republic, or at least slightly delay the apocalypse, is the willingness of some Democrats to honor their oaths to uphold and defend the Constitution.  It should go without saying many congressional Democrats will not, and of course, the Socialists and Communists, who are arguably the majority of that party, are determined to destroy the Constitution.  D/S/Cs generally, particularly since before Trump became president, have marched in lockstep.  Is there any reason to imagine enough of them will suddenly develop the moral compass, the honesty and the courage to do what is necessary to preserve the Constitution, and with it, our republic?

Another possibility is the Supreme Court may be responding to a very real threat: nice little Supreme Court youse got there.  Be a shame if anyting should happen to it, like court packing.  If so, the Court may well be appeasing the alligator now to put off being eaten until later.  With this threat hanging over them, what’s the difference between a non-packed and packed court?  The decisions will be the same.

This is why, gentle readers, the Supreme Court, with two contrary voices, may have destroyed itself, and with it, the republic.  If D/S/Cs are true to their current habits and intentions, they will pack the Court, which would make it precisely what the Court may be trying to avoid: a completely political body, a super D/S/C legislature that will ensure nothing a D/S/C congress does is unconstitutional, because there will no longer be a Constitution, except on paper in the National Archives.

We wait, with trepidation, to see if the Court’s calculation is wise, or one of the gravest mistakes in the brief history of a soon to be dissolved republic.