Where’s the evidence!?  The media indignantly cry, ignoring thousands of affidavits representing eyewitness testimony.  Paul Mirengoff at Powerline, no friend of President Trump, reports that 25 former presidents of the DC Bar—as leftist an organization as is possible to imagine—wrote a Washington Post Op-Ed wherein they whine that by pursuing the legal avenues open to him, and every candidate, to expose vote fraud, President Trump is destroying Democracy!  That’s a bit much even for Mirengoff.

Scott Johnson of Powerline, far more rational where Trump is concerned than Mirengoff, helps provide that evidence, not that the media will report on it, other than in attempts to make what is clear evidence of the worst election fraud in American history seem innocent.

And finally, my pal Andrea Widberg—AKA Bookworm—provides, at The American Thinker, where she does exceptional work, clarification of the video provided by Johnson.

What you’ll see in the video provided by Johnson, and the still frame clarifications provided by Widberg is multiple felonies—state and federal—being committed for the benefit of Joe Biden—actually, his handlers.  What you’ll see is the actual, willful destruction of democracy.  Here’s the story: 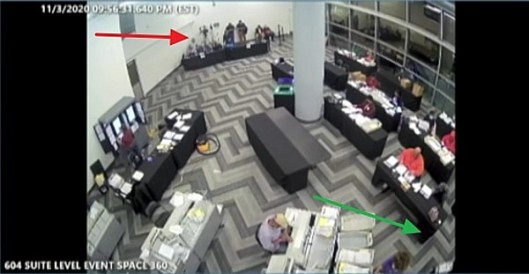 The setting is State Farm Arena, Fulton County, Atlanta, GA, election day, 2020. Two Republican poll watchers arrive at about 0800, but they (red arrow–the green arrow points to where the counting is actually happening) and the press are kept so far away from the actual vote counting—against state law—they were never able to see a single, individual ballot.

Criminals, gentle readers, are dumb, and the criminals stealing the election were stupid enough not to realize there were surveillance cameras everywhere, providing four separate views of the room.  The video was provided by honest Americans only the day before it was revealed to the Georgia legislature.  The real action began at about 2200.

2200: a woman with long, blonde braids, wearing black pants and a white shirt, announced everyone had to leave because the counting was being stopped and would resume the next morning at 0800.  Keep in mind this was the location where D/S/Cs originally claimed there was a water break that forced the evacuation of the building and the cessation of counting.   That was a lie.  That never happened.  In any case, it took until about 2230 for everyone to leave. 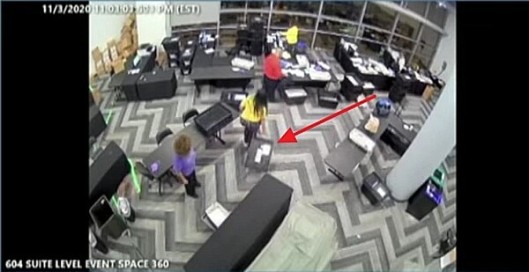 2300:  At about 2300, only four people remained, apparently three women—including the braided blonde– and one man in red.  They began removing four wheeled suitcases (red arrows) from where they had been hidden under a black, cloth-covered table.  From then until nearly 0100, they processed those ballots.

0100:  The Republican observers, having learned ballots were still being counted, returned to the State Farm Center, but were told by custodial personnel everyone left about five minutes earlier.

What happened?  D/S/Cs hid ballots in at least four suitcases under that black table, which had been set up by the woman with the long, blond braids, during the early morning of election day.  They tricked the Republican observers—who were never allowed to observe anything—and the press into leaving at 2200, and from about 2300 until about 0055, they processed those ballots.  How many ballots were processed?  There were at least three machines present, each capable of 3000 ballots per hour.  There is every indication they worked constantly, so 18,000 ballots, minimum, more than enough to overturn the election at this single location.

During those frantic two hours, the four previously mentioned were continuously present, and apparently, two others repeatedly entered and left the room, bringing and removing ballots.  Their identities should be easy to determine.

There is no innocent explanation.  We are entitled to believe we are watching innumerable state and federal felonies being committed.  We are also entitled to believe none of those ballots were rendered for President Trump.  Keep in mind this is merely one egregious incident of fraud in one of the swing states that evening.

Considered from a law enforcement standpoint, this is more than enough evidence to drag in those election workers, who are more than easily identified, and drag the truth from them.  The video alone demonstrates multiple violations of state and federal law.  Were I still an investigator, I’d love this case.  Imagine sitting each of those people in a room and explaining whoever told the truth would be looking at a deal, but the rest would be looking at state and federal felonies, and would be spending the next 30 years or so in prison. Who wants to be first?  Who wants to go down in history as a real traitor, as a degenerate who tried to defraud the American people and throw a presidential election?  How many would really want to do that for Joe Biden? Trump derangement only goes so far.

Now we find out if there are any honest cops in Georgia.  We know the FBI is untrustworthy, and the DOJ, completely coopted.

Left evening, I watched a Laura Ingraham special from Georgia.  She interviewed the Republican Governor of Georgia, Brian Kemp, who is clearly, at best, a coward.  Asked what he was going to do to ensure that at least the Senate run off election was honest, he refused to give a straight answer.  He was going to talk with people about what they might think about doing, but call a special session of the legislature?  Fix the law?  Oh no, he wouldn’t commit to anything like that, but he was sure concerned, and everybody needs to vote!  He presented himself as essentially powerless to accomplish anything.  Not a single Georgia Republican she interviewed had anything like a clear plan to correct the law or ensure electoral honesty, and one young Republican lawyer basically inferred it was impossible to ensure honesty, and the legislature would or could do nothing.

Apparently Stacey Abrams was right: she is the governor of Georgia, or at least her handlers are.

By all means, take the links and see for yourself.  If America is to be saved, the Supreme Court will have to intervene in every swing state and enforce the rule of law.  It’s highly unlikely it will occur in any other way.  But for the moment, we now have incontrovertible evidence of fraud sufficient to overturn the election in at least one state, not that that will matter to the press, or for that matter, to Georgia Republicans “leaders.”

“Fact checkers” are doing their best to “debunk” the story, in stereotypical “who you gonna believe, us or your own lyin’ eyes?” style.  As you read their attempt, keep in mind the Republican observers have signed affidavits affirming they were indeed told the counting was being stopped and everyone had to leave, and were shocked to be later told by the press it never stopped.  Also keep in mind the fact checkers are not, in any way explaining the suitcases, other than by inferring there is nothing unusual about them or anything that happened.  Everything is normal; nothing to see here; you can trust us.  One might also consider one additional fact: at the time nothing was abnormal going on, a mathematically impossible vote spike for Biden occurred. 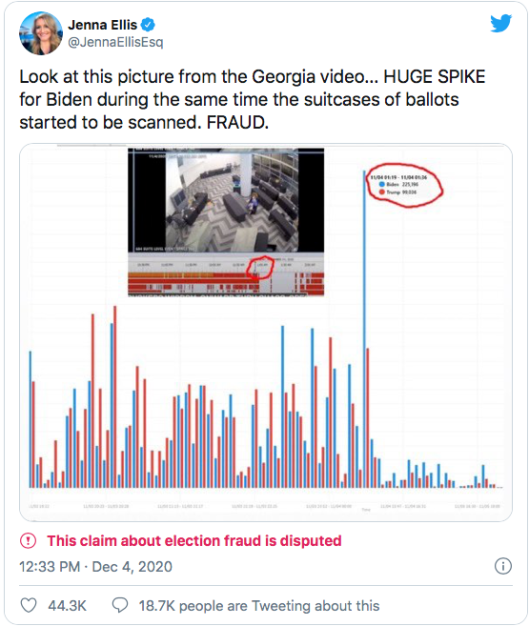 We may, gentle readers, be watching the slow motion destruction, not of democracy, but of our representative republic.  If this national fraud is not fully exposed and prosecuted, if the Georgia run off is not conducted lawfully, no one is ever again going to believe their votes matter–and they’ll be right.

UPDATE, 12-05-20 1315 MT:  As regular readers know, Democratically controlled Nevada is an entirely criminal state.  It now appears the same is true of ostensibly Republican controlled Georgia.  Keep in mind affidavits attesting to the fact observers—and the press—were kicked out of the State Farm Center at around 2200-2230 on election night were filed before the video was discovered.  Then there was this ABC News tweet from that evening:

Note the date and time.  The affidavits also asserted counting continued in secret, and Republican observers, learning of that fact, returned only to find the counters left a few minutes earlier, at around 0055.  Then the video surfaces and fully supports everything in the affidavits.

Now comes the Secretary of State’s office, ostensibly Republican, to tell us no one was ever told to go home, and the wheeled suitcases pulled from hiding weren’t suitcases at all, but the normal ballot receptacles used all the time.  Nothing to see here; everything is normal; move along, move along.

Take this link and read Neo’s article on this debacle.  Also, take this link to Andrea Widberg’s American Thinker article debunking the “fact check.”  And after you do, consider these questions:

If everything was completely normal and above board:

Why were Republican observers and the press–who were never actually allowed to observe anything–told to leave and told counting was suspended and would not begin again until the next morning?

Why did no counting resume until the criminals were certain no one was around (they waited about 30 minutes)?

If the ballots in the suitcases that weren’t actually suitcases were just another batch of ballots counted in the normal course of business, why were they hidden under a table, apparently all day?

Why weren’t they counted earlier in the day/night?

Why did counting stop there, and at virtually the same time in multiple other states?

Why did the counting—at that specific time–produce a mathematically impossible vote spike for Biden?

Who, exactly, were the people in the room from 2200-0055, particularly the woman with long, blonde braids?

If a supposed official of the Secretary of State’s office was there when the secret counting took place, when did he arrive?  Which person is he in the video?  Why would he suddenly show up after 2300 on election night at that particular room in that particular county/city of all counties/cities in Georgia?

There are, of course, many more questions that must be asked and answered, and the longer law enforcement—the Secretary of State’s Office cannot be trusted—waits to ask them, the more likely everyone involved will lawyer up.  And if everyone lawyers up and takes the Fifth, we can only believe they are involved in stealing the election and the whole affair is tainted.

My best guess given the information I have?  In Fulton County, as in Pennsylvania, Michigan, etc.  As 2200 rolled around on election night, D/S/Cs were in full panic mode.  Trump won more than 80 million votes, far more than they had planned for in their initial paper and computer vote fraud calculations.  If something was not done, and done fast, they were going to lose.  So they “shut down” counting, and manufactured ballots as fast as they could, enough to ensure Biden would win.  In Fulton County, they apparently had suitcases full of ballots already prepared just in case, hidden under that table, a table observers were never allowed anywhere near, just as they were never allowed anywhere near actual ballots.  In other states, they weren’t nearly as well prepared.

In Fulton County, did they have enough ballots already filled out so all they had to do was load them into the machines?  Perhaps.  Or perhaps they simply ran the same, smaller stacks of ballots through the machines as many times as necessary to give Biden a comfortable margin. We know one of those two options occurred because of the massive, mathematically impossible spike for Biden that happened at that time.

If this stolen election is allowed to stand, Americans can never again trust an election.  Something more than a third of Democrats believe the election was stolen—Democrats.  If Americans cannot trust elections, America is through, and it’s all over but the shooting and dying.

30 thoughts on “A Smoking Gun–UPDATED”