We hear much these days about “reimagining this” and “reimagining that.”  Such reimagining is being propounded by rebels without a clue.  As the world’s premier technologically advanced society, and as its longest-lived constitutional republic, quite a lot of imagining has already gone into our institutions.  Surely, many could use improvement in a variety of ways, but as we examine the ideas of those demanding reimagining, we quickly discover they not only have no clue what it is they’re trying to destroy and why it exists, but what might replace it.  Notice I did not say: “what might improve things.”  This is not, at its heart, a movement for improvement, but for wholesale destruction and chaos.  In this, dim-witted Marxists, anarchists, socialists, communists, race hustlers and assorted Democrat Party mongrels have found common cause.

Let us, gentle readers, use ubiquitous calls for “reimagining policing” to illustrate the utter lack of depth, intellect, and good will involved.  Policing is ubiquitous, but is generally poorly understood by the public, most of who are not at all sure if the police are part of the legislative, judicial or executive branches.  Answer: they’re part of the executive branch, the branch responsible for seeing the laws are fairly and impartially enforced.

I’ll not go into the origins of the police, except to note they exist because they are absolutely necessary.  We hire them to commit violence on our behalf so we can sleep soundly in our beds at night.  We hire them because we understand human nature, and understanding it, know evil exists and must be confronted, stopped, even destroyed, if we wish to have any semblance of order and safety in our lives.  We hire them to ensure we have law and order.  What is not well understood is we hire them to be the guardians of the Bill of Rights.

They do this in several ways: by ensuring our individual rights are upheld, and by arresting those that would violate our rights.  A police officer refusing to arrest a citizen for violating an unconstitutional law serves a vital public interest, as does a police officer who arrests a criminal for violating any law.

Most importantly, we must never make any law we are not willing to kill to enforce, for that is the final civilizational choice in law enforcement.  If we are unwilling to back up our choice of laws with the force necessary to secure them, including deadly force when necessary, we find ourselves facing cries to defund, abolish and reimagine the police.

There is, of course, enormous virtue signaling and hypocrisy involved:

Take, for instance, this latest development with CNN and its board. James O’Keefe and Project Veritas have been listening in on CNN’s calls for two months. O’Keefe said he’d be releasing these calls over the course of the month and he’s already begun making good on his promise.

This caused CNN to react by publicly threatening legal action and “notifying authorities” about O’Keefe’s exploits, threats that O’Keefe is apparently laughing off.

The funny thing about this is that CNN is the same network that decided it wanted to make the extreme-left in its call to defund the police. It published various articles attempting to pass the idea off as a good one.

Teeing up the narrative, CNN was attempting to pass off calling the police as something only privileged people get to do. 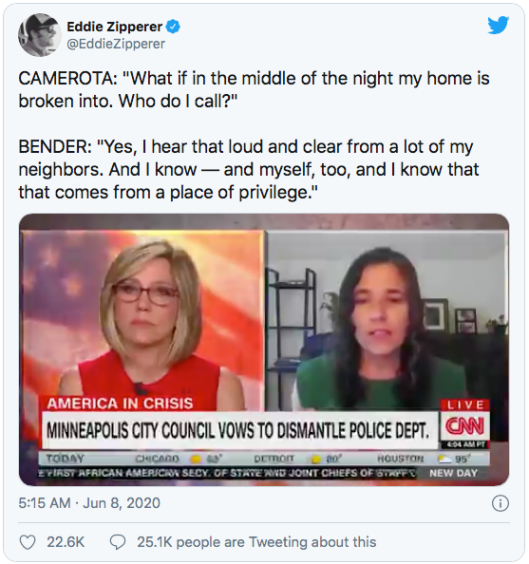 Let us, briefly, return to the mother of all cases that has spurred calls for reimagining the place: George Floyd.  The narrative would have us believe Floyd was an innocent, murdered by police who knelt on his neck, despite his cries that he couldn’t breath, thereby killing him.  His death was racist because Floyd was black, the primary officer involved was white, and because police.  What other reason could there have been for Floyd’s death?

I addressed those reasons in George Floyd: Social Justice, Real Chaos.  Floyd, an experienced violent felon, was caught passing counterfeit money.  Floyd was under the influence of multiple illegal drugs, including meth, and had three times the lethal amount of Fentynl in his system.  He was foaming at the mouth, and consistently resisted the officers.  Long before he was restrained on the ground—he actually demanded officers put him on the ground—he complained of trouble breathing.  The officers did call for medical help—twice–and were just trying to keep Floyd from hurting himself, or anyone else, until medical help arrived.

Take the link for more specific information, however, Floyd was dying before the officers laid eyes on him.  The restraint techniques they used were specifically taught and authorized by the Minneapolis Police Department, and they did nothing to cause his death.  They followed their training, police procedure and the law.  Floyd killed himself by illicit drug overdose.

But because Floyd was Black, his death was useful to BLM and Antifa, the Marxist, Black MN Attorney General, the anti-America establishment, and they made the most of it.  Before we analyze further, let’s return to the Redstate article:

In one article, they carry the water of Black Lives Matter founder and noted Marxist, Patrice Cullors on what they could do if the police were defunded:

Defunding law enforcement ‘means that we are reducing the ability for law enforcement to have resources that harm our communities,’ Cullors said in an interview with, Boston’s public radio station. ‘It’s about reinvesting those dollars into black communities, communities that have been deeply divested from.’

Those dollars can be put back into social services for mental health, domestic violence and homelessness, among others. Police are often the first responders to all three, she said.

Those dollars can be used to fund schools, hospitals, housing and food in those communities, too — ‘all of the things we know increase safety,’ McHarris said.

In the Floyd situation, what police resources, exactly were harming any “community?”  Floyd was a convicted, violent felon, arrested by the police in the commission of a felony.  Cullors would have the police ignore that kind of crime because police stopping it somehow harms their community?

And who would Cullors have responding to “Mental health, domestic violence and homelessness”?  Psychologists?  Sociologists?  Social workers?  I’ve worked with them all; they won’t handle calls like that without the police leading the way.  Many of them may be leftists, but most aren’t stupid.  They know you don’t make progress with such people until they’re in a safe environment where they can’t hurt themselves or others.

As to “schools, hospitals, housing and food,” there is no evidence Floyd missed any meals, was denied schooling or housing or medical care.  His multiple heart conditions were diagnosed, but he ingested meth and Fentynl anyway, knowing they’d kill him.  The looters and rioters that trashed Minneapolis and so many other D/S/C-ruled cities thereafter, were not in the least motivated by Cullor’s supposed social pathologies.

But what about systemic racism in the police?  It’s just not there, but the false narrative certainly is.  It’s an issue I explained in Heather MacDonald: Obliterating the BLM Narrative.  The facts:

*In America’s 75 largest counties, blacks are 15% of the population, but about 60%of all robbery and murder defendants.

*Blacks commit murder at eight times the rate of whites and Hispanics combined.

*Black criminals are far more likely to disobey the police and resist arrest than white criminals.

But what about police reform?  What about it?  Every institution can do better, but there is no institution in America more strictly regulated by law, beginning with the Constitution and working down to local law, and agency regulations, than our police.  Potential individual instances of misconduct are, as a matter of daily policy, thoroughly investigated.  Where this is not true, there are sufficient local legislative, civil and criminal mechanisms in place, if prosecutors are not themselves crazed leftists determined to see the law is not enforced.

Until recently, police candidates were rigorously vetted.  Ironically, constant attacks on the police have made filling police jobs, particularly in our leftist cities, almost impossible.  As a result of that, and “diversity” hiring lunacy, standards of intelligence have been reduced, and people with mental health issues, drug use issues, and substantial criminal records have been hired because they’re the right color, and/or no one sane or qualified wants the job.

If the goal is to ensure no violent Black criminals are ever again killed by the police, by all means, defund and reimagine away.  If the goal is to see that the police never use force against criminals, abolish the police.  Just don’t pretend there is no need of a police force, or that someone else will save lives when evil darkens the doorsteps of the innocent.  In Minneapolis alone, violent carjackings are up 530% over last year.  I suspect what police remain in Atlanta will not be energized to respond to CNN’s complaint, nor should they be.  What police remain are a bit busy, there and everywhere else.