There seem to be two trains of thought regarding the Coronavirus:

(1) As soon as Joe Biden takes office, the coronavirus won’t disappear, but the obsession about it will.  The media will no longer be all coronavirus all the time.  The virus will have served its purpose in destroying orange man bad.  Joe Biden will take credit for any vaccines developed and eagerly distribute them to a grateful nation.

(2) The Coronavirus panic was only the camel’s nose in the tent.  You’re about to get the whole camel in your living room, and it’s not going away.

Let us, gentle readers, briefly review the beliefs of D/S/Cs, for if Gropin’ Joe Biden becomes President, that is what will be driving public policy in America for at least the next four years.  If Harris—Biden won’t be there long—is able to implement the full D/S/C agenda, America will follow California’s lead in becoming a permanent one-party nation.

Even a surface glance at Biden’s “plan” for “defeating” the Coronavirus reveals his plan is nothing more than what President Trump has already done, minus Trump’s ability to mobilize the government and industry to produce and distribute a vaccine in an incredibly short, unprecedented, time.  Worse, the advisors of his Coronavirus task force have already expressed rather novel ideas.  As a group they absolutely want to lock down the nation—again–and mandate masks.  They’re talking from 4-6 weeks, maybe years.  One, Ezekial Emanuel, known as “Dr. Death” for his establishment of death panels in the making of Obamacare, believes life isn’t worth living after 75. Joe Biden is 77, so of course, exceptions must be made for the self-imagined elite.  With that kind of genocidal thinking, it’s not likely Emanuel will be receptive to the idea of providing vaccine to those that most need it: the elderly. After all, they’re sick all the time, and take health care money better not spent on the young and not sick all the time.  I trust, gentle readers, you see the irony in this?  Emanuel is also so over America First:

Emanuel, who served as a key architect of the Affordable Care Act under the Obama administration, co-authored a paper in September in which he encouraged officials to follow the ‘Fair Priority Model,’ which calls for a

fair international distribution of vaccine,’ rather than what he and his co-authors characterized as ‘vaccine nationalism.’

What this means is Emanuel will decide just how much vaccine Americans get, and the rest goes to foreigners.  Maybe Emanuel will get around to letting Americans have a little when he thinks it’s “fair.”  What’s that you say?  A great many Americans will die for lack of a vaccine?  Well, yes, but they’ll be the right kind of Americans: the elderly who aren’t of any use to anyone anyway, and Trump voters who surely deserve to die.  After all, D/S/Cs have lists; they know who their enemies are, and what’s the fun of seizing ultimate power if you can’t destroy your enemies, or let a Chinese-manufactured virus do it for you?

We must ever keep in mind for D/S/Cs, their policies are a religion, which is why they so hate Christianity.  They recognize no power greater than the state, which by virtue of their superior intellects and morality, embodies their thoughts and values—their very persons.

We must also never forget because their policies are essentially holy writ, handed down by those whose intellects and morality cannot be adequately grasped by smelly, toothless, non-college educated, unenlightened, absolutely non-woke WalMart shoppers—they actually work with their hands…eeeuuuwwww!–they are non-falsifiable.  They cannot possibly be wrong.  By the way, they think no more highly of anyone whose degree or degrees come from state colleges, which are surely low class and unable to install the proper beliefs and virtues.

Having non-falsifiable, perfect policies is liberating.  This allows D/S/Cs to claim their policies have the advantage of being backed by “science.”  This is closely aligned with their idea of “truth” which is not actual, backed by evidence truth, but relative, infinitely flexible truth—their truth—which is superior to all other “truths” because it’s theirs, and it’s science.  Their perfection allows them to declare scientific truth, and avoid all of that annoying and time-consuming experimentation.  Even better, they get to declare anyone disagreeing with them—what could Normal, smelly Americans possibly know?—“science deniers.

Senator Chris Coons (D, lunatic) is following up on this position by asking the dim-witted, scraggly bearded Jack Dorsey of Twitter, to ban the speech of climate deniers:

Well, Mr. Dorsey, and I’ll close with this, I cannot think of a greater harm than climate change, which is transforming literally our planet and causing harm to our entire world. I think we’re experiencing significant harm as we speak. I recognize the pandemic and misinformation about COVID-19, manipulated media also cause harm, but I’d urge you to reconsider that because helping to disseminate climate denialism in my view further facilitates and accelerates one of the greatest existential threats to our world. Thank you to both of our witnesses. Thank you, Mr. Chairman.

Because D/S/C’s policies are perfect and incapable of being proved false, this presents a seemingly unresolvable problem when one of their policies inevitably fails.  How can such a thing be explained away if the policy is non-falsifiable?  It’s easy.  The media completely ignores it, and circa 2020, social media bans any mention of it, even between private parties.  But even that isn’t 100% reliable—yet—so they fall back on their usual methods:

(1) The policy hasn’t failed; it’s a brilliant success!  You’re just too stupid to recognize it; you don’t know your own interests, you stupid science denier racist white supremacist!

(2) There hasn’t been enough time for the wonders of the policy to become obvious.  Another century or two should do the trick.

(3) Not nearly enough money has been spent to allow the policy to work properly.  We must raise taxes immediately, again!

(4) The policy hasn’t been applied good and hard enough.  The Normals aren’t writhing in agony yet.  Their lives are only partially destroyed.

(5) Normals have been allowed to survive to oppose the policy, even if that opposition amounts to nothing more than a bit of grumbling.

It must also be understood D/S/Cs believe in equality of outcome, not equality of opportunity, which is what our economic system is built upon.  They want to “equalize wealth,” and everything else, which is what government-run “health care” is all about.  Actually, it’s government- rationed health care, which means a very poor quality of care—when it’s available at all—for everyone except the self-imagined elite and their useful lackeys. 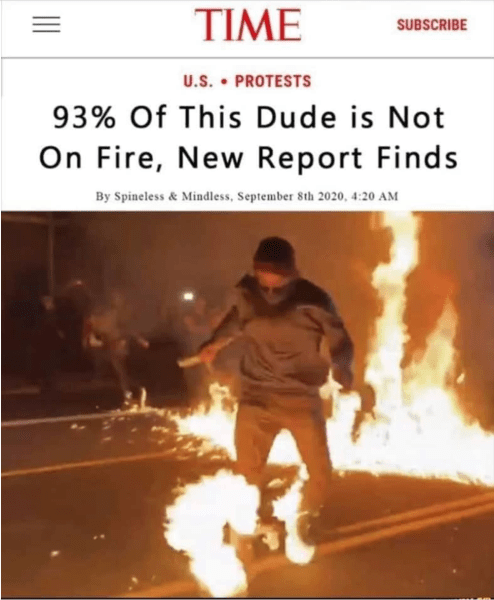 Because they hate Christianity, and of course, the Creator of the Universe, they do not recognize the inestimable value of every human being.  The value of individual lives depends upon their political utility.  This is why the very Christian idea that “all lives matter” does not encompass Black lives, because the Marxist thugs behind Black Lives Matter are politically useful, so their lives matter more than anyone else’s, until their political usefulness ends.  And of course, nothing is more important than the right narratives, and forcing Normals to speak them aloud, but more on this later.

Because their policies—and they—cannot possibly be wrong, the Republican house cleaning in the House of Representatives cannot possibly have to do with them or their policies, it’s a matter of faulty “messaging.”  They just didn’t have a narrative that would fool Normals.  Fix the messaging—Normals are stupid and smelly and drive pickup trucks…eeeuuuuuw!—and Normal will vote for them wholesale next time.  To be absolutely fair, some Democrats—an endangered species in the D/S/C Party—have a more rational view, but they’re not in charge, and even they fall back on #7.

Keeping all of this in mind, where will we be if and when Joe Biden sniffs and gropes his way through inauguration?  The best bet would be to examine the words and actions of Michigan Governor Gretchen Whitmer.  When her executive actions were, amazingly, ruled unconstitutional by the Michigan Supreme Court, Whitmer merely did the same thing—actually making the restrictions even worse just to show Normals and the Supreme Court who is boss—through the State Health Department.  The Legislature apparently wrote law that allows her to get away with that.  Look in the dictionary under “smug,” or “insupportably arrogant” and you’ll find her picture. 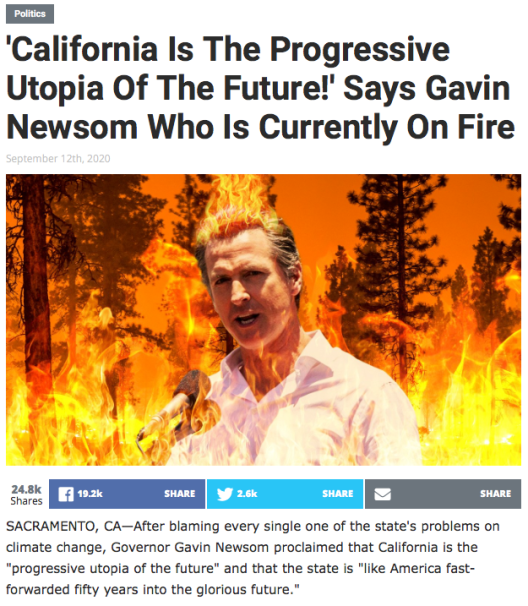 The incredibly greasy—his hairdo is subject to wildfires–and dim-witted Gavin Newsom is about to impose a curfew on Californians.  In a sane state, this would be labeled Martial Law, but remember, we’re talking about California.

When you’re godlike in intellect and morality, when your edicts are perfect, you have no pangs of conscience, no doubts.  You are pure and so are your motives, so why shouldn’t you have absolute power?  In a just world that bends toward social, climate, food, race, etc., justice you are the omnipotent bender, because you’re just that wonderful.  And if you’re that wonderful, it would be wrong to deny yourself absolute power, which you will wield for—against—those too unenlightened and smelly to know what’s good for them, the nation and the world.

What then, can we expect of a Biden Administration?  Vaccine will be rationed, handed out to supporters, not anyone else, and it will absolutely be shipped overseas—our enemies will surely be first in line—and Donald Trump will not only be given no credit, he’ll be blamed for any apparent failures.  Of course, the DOJ will be doing everything they can to put him, every member of his family, and everyone that worked for them behind bars, so that will be the least of his troubles.

Lockdowns, mask mandates, curfews, and similar measures will be imposed, and will not end.  Schools will be closed indefinitely, forget family holidays, and masks must be worn even in one’s own home.  Bidenites are already predicting they’ll have to be in place through 2022, and of course, that will be extended because reasons and systemic racism and TRUMP!  D/S/Cs see the Coronavirus as an opportunity to do many things they haven’t been able to do without the cover of an international pandemic, and they’re not going to let go of the opportunity to circumvent the annoying, outmoded Constitution, which so often thwarts their intellectually and morally superior policies.  They are smelling power, and are out for blood.

And of course, they’re absolutely going to be coming for your guns.

6 thoughts on “Your Biden Coronavirus Future”