I bought my first Glock—a 19—around 1990.  It was everything I had been looking for in a handgun: lightweight, good trigger, concealable, reliable right out of the box, and required no modifications.  Prior to Glocks, virtually every handgun I ever owned required expensive and time-consuming modifications to attain that level of reliability and function.  Indeed, Glocks were not, compared to a Browning Hi Power and many other arms, pretty, but they worked, and at a very competitive price.  Gaston Glock got it right the first time and only improved on his success over the years.

Circa 2020, Glock owns a significant part of the police market—around 65% by many estimates—and around the same portion of the non-police market.  It has dramatically expanded its offerings in terms of caliber and overall weapons size, producing subcompact, compact, duty sized and long slide competition models, while never changing the basic appearance of its handguns, or their technology.  Why mess with success?  If it works, and has market share its competitors would die for, don’t change it.

One measure of success is always the aftermarket.  For Glocks, the aftermarket is full of high-quality accessories, everything from triggers to sights, to barrels and slides, devices that arguably improve function to mostly cosmetic additions.  Every holster maker builds multiple offerings for Glocks, and because virtually all Glocks have accessory rails, a plethora of lasers and lights can be attached.  Lasers and lights are even made for the few Glocks without accessory rails by companies like Crimson Trace.  Mrs. Manor’s and my Glock 43s wear CT LL-803 Laserguard Pro units,  which house a flashlight and laser sight.  My Glock 17 wears a CT Railmaster Pro,  as does my Glock 19. 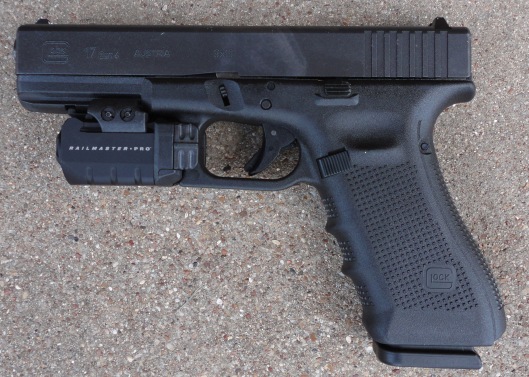 I’ll take a moment here to put in a plug for Crimson Trace, though I gain nothing from the endorsement.  I’ve used their products for nearing three decades, and found them all well designed, well manufactured, rugged and reliable.  They also obviously work to keep that ruggedness and reliability while making their products as small and light as possible.  I do own a few similar products by other manufacturers, but generally consider CT, like Glock, to be the best in their respective fields.

I’ve only had two complaints about Glock: they have yet to market a semiauto, pistol caliber carbine, and a .22 LR pistol.  For years, I couldn’t understand why they would not seize this incredibly lucrative portion of the market.  Their handgun owners would surely vacuum up these products as fast as stores could unpack them, and magazine interchangeability–in like caliber carbines–would be a major sales point.

Fortunately, Glock remedied the .22 pistol gap with the Glock 44.  Many think the Glock 17 is so designated because it has a 17 round standard magazine.  Actually, it was Glock’s 17th patent, and the G44 is Glock’s 44th.  Unfortunately, there is no Glock carbine, and no apparent plans to make one.  It probably took Glock so long to make the 44 because it is difficult to make a reliable .22LR handgun, and because there was likely no pressing need, financially, to do so. 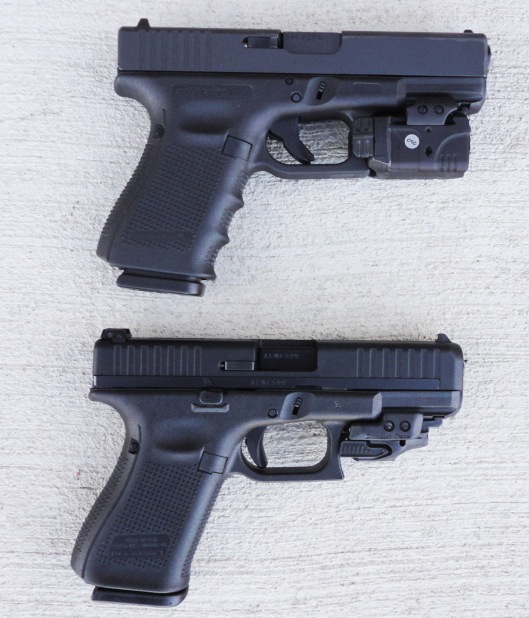 The G44 is not sized in proportion to the .22LR (G19 on top).  It’s virtually identical in size to the mid-sized G19, so virtually all holsters that will fit the G19 will  fit the G44.  Note, however, the finger grooves common to many centerfire Glocks are missing on the G44. Sharp-eyed readers have also detected another significant difference, but I’ll get to that shortly.

As the left side view reveals, it is a standard Glock: no manual external safety, the slide stop, magazine release and take down mechanism are present.

The right side also has the take down mechanism—both sides must be pulled down simultaneously to release the slide—but one difference from other Glocks: an ambidextrous slide stop/release, a concession to left handed shooters.  Whether Glock will add this feature to its other handguns when a new generation is introduced is unknown.

Other than the ambidextrous slide stop, there are only two ways, at a glance, to tell it’s not a centerfire model: the .22 caliber, recessed, muzzle, and the viewport cut into the top of the breech to allow a flash of brass.  I suspect this was

done because on centerfire Glocks, the extractor (right side just behind the breech) protrudes somewhat from the frame when a round is chambered.  This allows the shooter to confirm the chamber is charged merely by feel.  The extractor does not provide that same tactile feedback in the G44, or if so, it is so slight I could not feel it, thus the port in the breech.  Of course, with any semiauto, one can always withdraw the slide just enough to see brass in the chamber, always being sure to confirm the slide is fully in battery thereafter.

Anyone used to centerfire Glocks will think the barrel/breech to be small and light by comparison.  As you can see from the photo, the breech is also quite different by comparison. 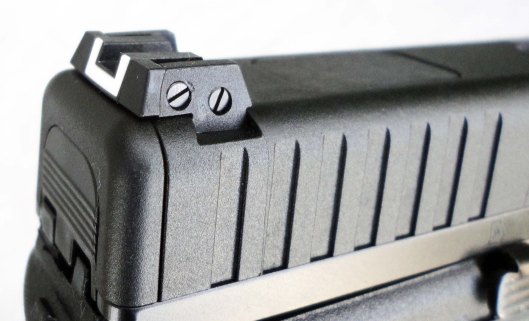 Also somewhat different is the rear sight, which while maintaining the visual configuration of standard Glock sights, is fully adjustable for windage and elevation, though a very small screwdriver is necessary.  It’s difficult to understand why Glock doesn’t include this sight on all of their models.  I’m sure many shooters would pay a few extra bucks for that useful feature.

Also different is the magazine, which features pull down tabs on both sides of the magazine to aid in loading the 10-round capacity magazines.  The feed lips are different than those of centerfire magazines, and instead of numbered windows on the back of the magazine, Glock has molded in numbers for 5 and 10 rounds on the side of the magazine near the open slots on both sides.  Other than that, it is a Glock magazine in materials and general design.  The pull down tabs are handy and the magazines are easy to load.  With .22 LR designs, one must always be careful not to allow the rim of any cartridge to fall behind the rim of the cartridge below it.  This will absolutely cause a stoppage.  But with the G44, I paid virtually no attention to this, and this problem did not develop.  The magazines are also virtually identical in size to G19 magazines, so any carrier that fits them will also fit the G44.

The first thing anyone familiar with Glocks will notice when picking up a G44 is the lack of weight.  All Glocks are light compared with fully metal firearms, but the G44 feels positively featherweight, and the slide, surprisingly so.  Most of the weight in a centerfire Glock is in the slide, which is steel, but not so in the G44.  The .22LR cartridge doesn’t produce nearly the recoil impulse of centerfire cartridges, so to produce cycling reliability, it was necessary to substantially lighten the slide. Accordingly, most of the slide is made of the same polymer as the frame, and only small strips of embedded steel at the bottom of the frame are included to ride on the frame rails.  The G19 with an empty magazine weighs 23.63 ounces.  The G44, 14.64 ounces.

Even so, the G44 feels very much like a G19, only lighter, and the trigger reach, feel and pull weight are essentially identical—about 5.5 pounds with only about a half inch of travel.

A trip to the range produced no surprises.  Using seven magazines–Glock mags are plentiful and inexpensive–I experienced only a single failure to feed very early on, which I suspect was due to a round that did not “tip up” properly in the magazine.  Every round following from the same magazine did not have the problem, and the weapon functioned flawlessly from that point onward.

Recoil impulse is present, but very light indeed, and muzzle flip is almost nonexistent.  It’s very easy to shoot tight multiples with this handgun.  Despite the .22LR cartridge, the G44 is Glock-like in every way.  Magazines fall immediately from the magazine well with no hangup.  Because I use a solid Weaver stance, I experienced no malfunctions due to limp wristing, but I must assume this handgun, as virtually all others, will malfunction if the shooter doesn’t give the handgun a solid grip against which to cycle the slide.

I did not shoot for ultimate accuracy, but it was easy to keep every round within a standard silhouette center circle from 25 yards inward.  It’s not a target pistol like Ruger Mark IVs with an integral barrel/upper frame and attached sights, but as a plinker, and a brilliantly easy way to introduce new shooters to semiautomatic pistols, and particularly more powerful Glocks, it’s a perfect platform, which is yet another reason why I wonder it took Glock so long to produce.  It’s certainly an inexpensive way to shoot a great deal.

The G44 easily breaks down exactly as every other Glock does, and into the same four components necessary for routine cleaning.  The Glock design uses not a single screw, bolt or nut, so it’s very easy to take down, easy to clean and equally easy to reassemble.  There are no tiny springs or other parts, with a takedown for basic cleaning, that can shoot off into the gun parts black hole, never to be seen again.  This is not surprising as the G17 was designed for a military competition.

It’s common knowledge the .22LR cartridge is dirty, but after firing more than 100 rounds, I didn’t find the G44 any more difficult to clean than my centerfire Glocks.  However, the nooks and crannies of the G44 are smaller than on centerfire guns, and nothing is handier in such situations than many Q-Tips.

I also equipped my G44 with a Crimson Trace CMR 201 laser sight.  Crimson Trace lists the little unit at $164.99, though I’ve seen it for as much as $20.00 less from other sources.  However, buying one direct from CT provides free batteries for that unit for life.  The CMR 201 fits all weapons with a standard rail of sufficient–minimal–length.  It has ambidextrous tap on/tap off levers that fall perfectly to the trigger finger just in front of the trigger guard.  It is very small, light, and produces CT’s usual brilliant red beam, which is visible in daylight out to 15 yards under most circumstances.  Lasers are obviously visible at greater ranges indoors and under subdued outside lighting.  Surprisingly, the “iron”—actually, polymer—and laser sights were perfectly aligned at 25 yards.  I’ve never seen that before.

Is the G44 suitable for self-defense?  In that it is reliable and handles like every other Glock, yes.  However, the .22LR cartridge is, in comparison with centerfire handgun cartridges beginning with the .380 ACP, weak.  I’ve always considered the .380 the minimum self-defense cartridge.  Advances in ammunition technology in recent years have improved even that little cartridge, and some manufacturers have begun marketing the .22LR in self defense versions optimized for pistol length barrels.  These cartridges probably perform better than non-optimized cartridges, but I’d still prefer at least a .380.

As with the G17, Glock’s first firearm, Glock got the G44 right.  Mine cost more than $100 less than a centerfire Glock, and of course, .22LR ammunition is inexpensive—if you can find any these days.  It’s a very low cost way to hone one’s skills, and the manual of arms transfers directly to every other Glock.  Besides, it’s plainly fun to shoot, and is a very non-threatening choice for introducing new shooters to the shooting sports.