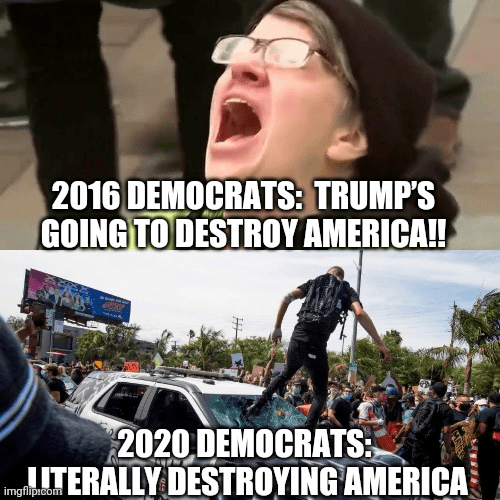 Before launching into the primary topic of this article, just a thought gentle readers.  Once D/S/Cs admit there might be just a tiny bit of electoral fraud, why is the fact such fraud of all kinds virtually exclusively benefits D/S/Cs so seldom mentioned?  Would that not, prima facie, be evidence of systemic fraud?

If it were not, wouldn’t the beneficiaries of fraud be much more evenly distributed?  I’ll be clear: when anomalies/fraud falls entirely, or even outside the realm of statistical probability in the favor of one party, there be crime.

Which brings me to my first career post-military: police work.  I spent many years as an investigator, and while I know I don’t know everything the FBI knows, I’m seeing no evidence whatever of actual criminal investigative work, and in this nationwide situation, we have everything from state to federal felonies, and arguably sedition,  punishable by 20 years.

Were I an investigator on this case, I’d be going after lower level people, flipping them—easy with the kinds of penalties federal law allows—and working my way up the chain. Even at lower levels, documentable evidence of massive fraud would be quickly found and secured.  Few people would be willing to do hard time for Joe Biden, regardless of how revolutionary they are.  Our contemporary revolutionaries think they’re invulnerable because to date, their own revolutionary colleagues in charge of D/S/C cities and states have let them be.  Confront them with the reality of decades in prison and non-consensual rough sex, and they’d fold like a cheap lawn chair.

By now, I’d already be climbing the chain of the conspiracy.  So why am I not seeing any of that?  But there’s no evidence!  Not so, but let’s visit Larry Correia, who is speaking to that. 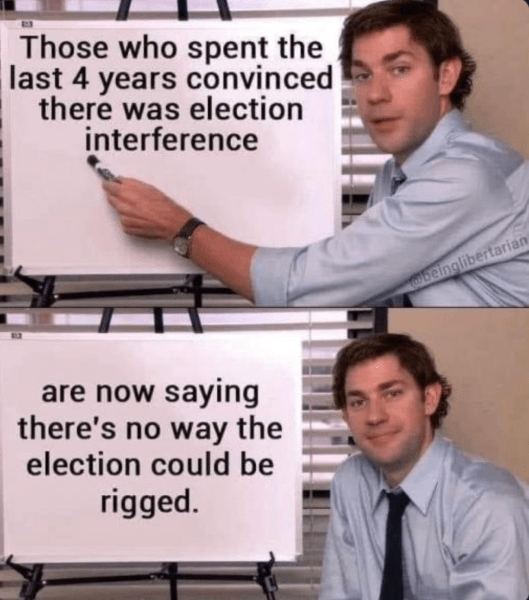 The other possibility, particularly with federal law enforcement, is they do not want to find fraud.  I’m sorry, for the sake of all Americans and for our Republic, to say we can no longer see the FBI and Department of Justice as anything but compromised in the favor of D/S/Cs.  Oh, statistically at least, there are surely some honest people in those organizations, but when one knocks on your door, how do you know which they are?  Should that be the case, and with my admitted lack of knowledge of the overall picture it seems to be, there is no limit to the amount of time that can be wasted ignoring fraud or pretending to investigate without investigating. 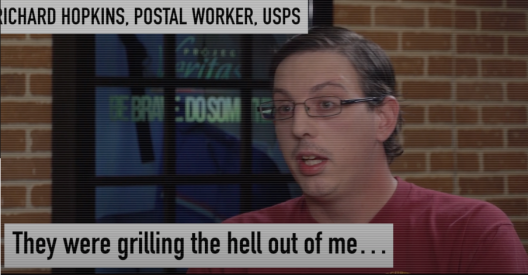 One other quick and related sideline before we move on: Project Veritas’ investigation of genuine whistleblower Richard Hopkins, the Pennsylvania postal worker, a former Marine, who is reporting vote/postal fraud.  Hopkins was told by supervisors to backdate late arriving ballots.  PV called the supervisor involved for comment, and he immediately hung up.  Hopkins has been suspended without pay.

Of course, the media, led by the Washington Post, claimed Hopkins retracted his claims.  But Hopkins not only denied that, he recorded the hostile, three hour plus interview, to which he was subjected by Postal Service Inspectors.  Inspectors Russel Strasser and Charles “Chris” Klein, tried to gaslight Hopkins.  They told him they were there to protect him, and tried cheap psychological tricks to make him doubt his memory.  It didn’t work, and the entire shameful “interview” may be heard here.

Some quotes from Strasser:

‘I believe you. I’m in your corner on this. I want to take care of you. Yes. You believe me on that. I mean, because that’s why I’m here. There we go. OK?’

‘This storm is getting crazy, right? It’s out of a lot of people’s control. And so, the reason they called me in is to try to harness that swarm, try to reel it back in before it gets really crazy.’

‘I am actually, I am trying to twist you a little bit because in that, believe it or not, your mind will kick in.’

‘I am scaring you here. OK. If we are not 1,000% percent accurate with our honesty and it can be argued that money was gained by, I’m going to say assumptions. They’re going to say deceptions.’

Honest, professional investigators do not try to influence or trick witnesses, and particularly not people reporting serious federal crimes.  They do not cover up crimes that could destroy public faith in our Republic.  They ask questions designed to gather evidence, without concern for the outcome.  If there is a crime, they follow it up, if there is not, they kindly explain that to the reporting party.  Strasser, particularly, and Klein are deep state thugs.  They were there to cover up vote fraud and protect the less than stellar reputation of the Postal Service, not to serve the people of the United States, and absolutely not to uphold and defend the Constitution.  The DOJ must immediately open an investigation of them, and see them fired, criminally charged, and if convicted, imprisoned.

Now we turn to the DOJ, and Richard Pilger, the DOJ’s top election crimes prosecutor.  AG William Barr issued a memo to the DOJ reminding them that they should investigate specific allegations of voter fraud.  In so doing, he was only reiterating the law and what the DOJ expects of federal prosecutors: that they investigate federal crimes.  But within hours, Pilger resigned.

Pilger claimed he resigned because Barr was changing DOJ policy:

Pilger acknowledged the abrupt departure from DOJ policy in his resignation letter, saying the attorney general had issued ‘an important new policy abrogating the forty-year-old Non-Interference Policy for ballot fraud investigations in the period prior to elections becoming certified and uncontested,’ per a portion of the letter published by CNN.

Pilger is playing the above reproach patriot, resigning out of conscience when forced to do wrong by evil Trump followers.  Not so much:

But Barr argued in the memo, which was first published by the New York Times on Monday, that concerns such acts could inadvertently impact an election are minimized once voting has concluded and that, in some cases, investigations could not be delayed until the election is certified.

Despite writing that ‘most allegations of purported election misconduct are of such a scale that they would not impact the outcome of an election,’ Barr also contended ‘that is not always the case.’

‘…I authorize you to pursue substantial allegations of voting and vote tabulation irregularities prior to the certification of elections in your jurisdictions in certain cases, as I have already done in specific instances,’ Barr’s memo continued in part. ‘Such inquiries and reviews may be conducted if there are clear and apparently-credible allegations of irregularities that, if true, could potentially impact the outcome of a federal election in an individual State.’

Let me see if I understand Pilger’s argument.  It’s somehow against protocol, and therefor unethical, for the DOJ to investigate grotesquely obvious voter fraud that will destroy public confidence in our Republic until after the damage is done and the evidence has been destroyed?  Yes, I think that’s about right.

Let us keep in mind Barr has the absolute authority to direct his prosecutors to prosecute any class of crime.  A copy of his memo may be found here.  He is the Attorney General, the top law enforcement authority in the country–apart from the President–the man that sets the priorities for the DOJ.  In his memo, Barr is certainly not directing prosecutors to do anything unethical or unlawful.  He is instead directing them to do their jobs and in so doing, to protect the integrity of presidential elections.  Who could possibly object to that?

Prosecutors who do not want to find or prosecute election fraud.  Prosecutors who want to be in the front of the line when Joe Biden—actually Kamala Harris—hands out prominent jobs in the DOJ.  Prosecutors not willing to honor their oaths to uphold and defend the Prosecution.

Pilger is merely being transferred to another DOJ Job.  He deserves to be transferred, with his belongings, to the sidewalk in front of Main Justice headquarters.  Weep not for Pilger.  If Biden is elected, he’ll probably be made Attorney General.

Thomas Lifson at The American Thinker has more on this particular case. Also, a visit to another Larry Correia article will be enlightening. 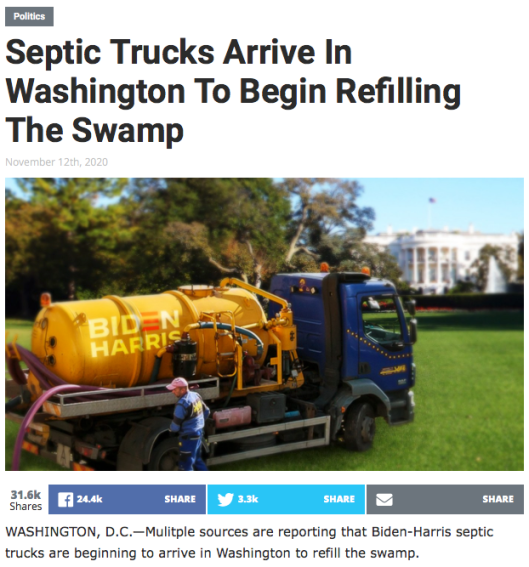 President Trump has made a good start on draining the swamp, but its deep and fetid, and four more years will go a long way toward restoring integrity to our Republic.  That’s why people like Strasser, Klein and Pilger are so desperate to cover up unprecedented election fraud.