What are the primary differences between D/S/Cs and Normal Americans, imperfectly represented by the Republican Party?  The most obvious is D/S/Cs believe in equality of outcome—Kamala Harris made the more than clear a few days ago—and Republicans believe in equality of opportunity.  This is an important distinction in that the former can take place only in a socialist/communist dictatorship, and can never be successful—it only impoverishes everyone but the self-declared elite.  The latter is a foundational principle of capitalism and a liberty-ordered state.  Does this help clarify things a little?

But what about the coronavirus?  Biden has promised to abolish it his first day in office.  If Biden wins, Covid-19 will be ignored if D/S/Cs think it no longer politically useful.  They can declare victory over the virus and claim Trump was wrong.  The most likely probability, however, will be years of lockdowns and other infringements because the virus gives D/S/Cs an excuse for exercising unconstitutional, total power over the lives of Americans.  Any vaccine will be slow rolled, even suppressed, because Trump.  But people will die!  And your point is…?

In PA, GA and NC, President Trump still leads, but his margins are being, little by little, chipped away, as expected.  What is late vote counting for if not to give D/S/Cs the opportunity to make up lost ground?  At the moment, Trump and Biden are on track for a tie.  The outcome will almost certainly be decided in the Supreme Court because corrupt state courts won’t enforce their own laws if they lead to a Trump win. In Nevada, Clark Couty–Las Vegas–is last to add their votes to the total.  Las Vegas, the most corrupt town and county in America, though Michigan, Pennsylvania, and other cities and states are giving them a run for their money. 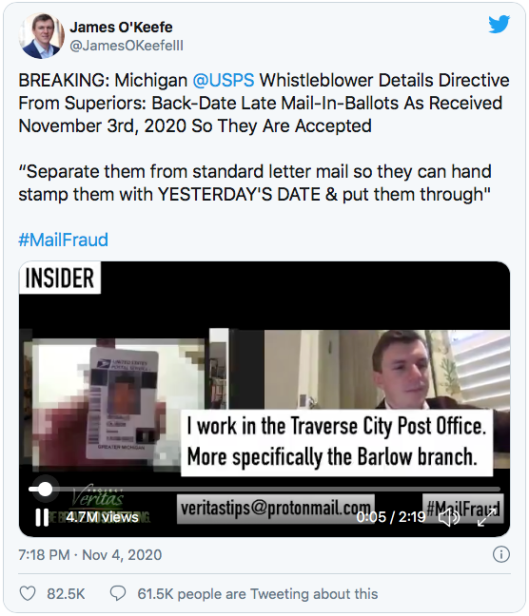 In Michigan, there is at least one honest postal worker, but the rest… Read this report by Andrea Widberg at The American Thinker.

Read too this first person report about how the vote is being stolen in Pennsylvania.

Our system of government is one of checks and balances between the three branches, but adherence to those checks and balances depends entirely on the willing acceptance of those principles, and the limitations on government they impose, by everyone involved.  As long as there is willing acceptance of those limitations, the people, from who all political power comes, can trust the government. 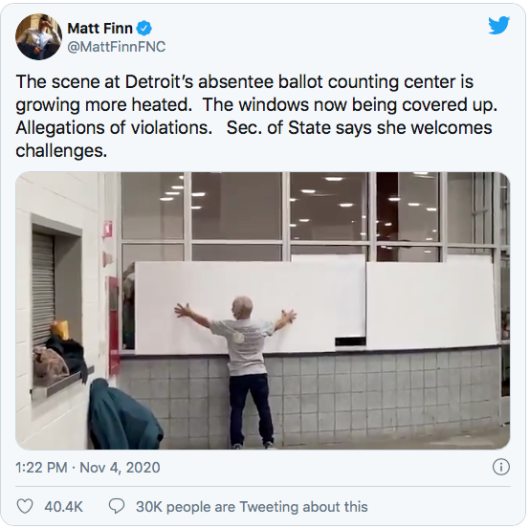 But if any branch of the government, say the executive branch, decides to no longer play by the rules of our constitutional republic, they can unilaterally destroy it, and all trust in the system.  The Supreme Court has no actual coercive power.  It depends entirely on the Executive branch and its law enforcement function, to carry out its decisions.  It has no armed force of its own.

The same is true of the legislative branch.  It has no enforcement power for any law it writes. It must depend upon the executive branch.

Hoping the alligator they created and fed eats them last…

Those that actually pay attention, that are students of actual history, know how this works.  The maximum leader either packs or abolishes the Supreme Court and/or the legislature. Having control of all law enforcement and their guns, that’s not hard.  But American police would never do that!  Most would not, perhaps, but more than enough, understanding what’s happening, would choose to have near absolute power over the lives of others, or at the least, would choose to be on the winning side, the side that gets fed, and has electricity, gasoline, and other necessities.

Most likely, the Supreme Court would be allowed to exist, but would have no power at all.  With the media entirely in the pocket of the Administration, they wouldn’t even be able to inform the public of the truth, which Joe Biden prefers over fact.  The law would be whatever Biden—actually Harris—says it is.  This is not the Democrat Party of even 10 years ago.

Still think it doesn’t really matter who the president is?  Still think our system is strong enough to survive anyone in the presidency?  The seeds of civil war are being planted as we watch.

2130 MT:  Interesting development: even MSDNC and CNN think Trump might win Arizona.  In fact, in the last several hours, he’s gained at least 10,000 votes, and enough remain for him to take the lead—if the count isn’t riven with fraud– unlike in blue states where only Biden is gaining.  And D/S/C Rep. Abigail Spanberger of VA, who hung onto her House seat by her fingernails, was a bit exercised during a D/S/C caucus conference call:

There are signs other D/S/Cs have similar sentiments, and it’s even possible, though probably not likely, Republicans could yet take back the House.  Regardless, they’ve increased, and will continue to increase their numbers, while the opposite is happening to D/S/Cs, who are still stunned their blue wave didn’t materialize.  All the smart people said it would!  The question is have these people, and enough of them, realized the insanity and danger of socialism/communism, or are Spanberger and the rest merely urging a return to stealth, rather than in-your-face-we’re-going-to-put-all-of-you-Deplorables-in-reeducation-camps, socialism/communism?

President Trump also addressed the nation.  Fox carried it, live and completely, while the other networks only covered a little and immediately began to say Trump was lying, dropping any further coverage.  They absolutely don’t want Americans to see and think for themselves.  Powerline has a link to the entire thing. One thing is clear: Trump is not going to give up.

More and more evidence of systemic vote fraud in blue states and cities is coming out by the minute, but we’ll not be getting any definitive news tonight, so one final comment for the evening.  Regular reader and commenter Doug, whose comments we all should consider—SMM, unlike most of the media and many blogs, welcomes polite views of any kind–suggests my assertion that the seeds for civil war are being sewn “idiocy.” 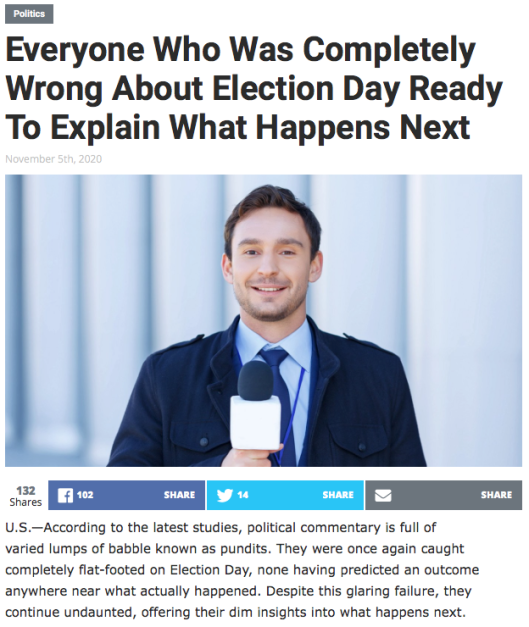 Notice, I didn’t say it was inevitable, only that D/S/Cs, in perpetrating such wide-spread, blatant, arrogant and unlawful fraud were making civil war possible, perhaps more possible than before election day.  As I previously noted, our republic runs on willing compliance–investment really–in our system.  Willing compliance comes from trust, trust in the rule of law, in equality under the law, trust that there is not a two-tiered system of justice, one for normal Americans, and one for the self-imagined elite, and trust their rights will always be respected.  And of course, trust in the integrity of our elections.

Take this several inevitable steps further.   D/S/Cs have already gone overt on their intention to dismantle the Bill of Rights and every part of the Constitution that might impede their turning America into a one-party, socialist state.  We don’t have to infer their intentions, they’re telling us exactly what they plan to do, and if they succeed, America, the rule of law, and Constitution, all of it is gone.

When people tell you, clearly and with red-faced, spitting rage and hatred, they intend to destroy you, it’s wise to listen and act accordingly.

They may be stupid enough, they may be possessed of sufficient idiocy, to imagine normal Americans are going to stand for that.  They are surely stupid enough to think they’ll be able to command our police military to go out into the nation and murder their families, friends and countrymen in general.  Oh, some will, most won’t, and when they abandon the military, they’ll take their knowledge and weapons with them.  A visit to this 2018 Larry Correia article, or to Kurt Schlichter’s Kelly Turnbull novels, will be instructive.

Faced with the actual or functional abolition of the rule of law, the Constitution, America, the red states, and not a small portion of the population of blue states, will form their own union with a stronger Constitution, and they’ll leave the self-imagined elite to starve.  And they will, because they’re not producers.  They don’t know, beyond perhaps designing circuits or calling others racist, how to build or maintain things, and they surely don’t produce food, clothing, motor vehicles and electricity.  They can’t build or maintain homes, highways, bridges, or anything else necessary for civilization.

So no, I don’t think warning if D/S/Cs destroy American’s trust in our elections a civil war is more likely is at all stupid.  Rather, it’s necessary.  As one who has served in our military, as one who has spent much of his life under arms, as one who has seen more death and the horrible things we do to each other than anyone should, I’m the last person on earth that wants civil war.  So I hope to persuade those who don’t have my experiences, who think the only outcome of destroying individual liberty and the nation will be enriching themselves, they’re wrong, and they’ll unleash unimaginable suffering on us all, them most of all.  If they provoke a civil war, the outcome won’t be to their liking.  The only upside for them is they won’t be around long enough to suffer as they deserve.

If we’re to survive as a nation under the rule of law, this election must be corrected—only lawful votes must count–and everyone involved in fraud must be prosecuted.  Social media companies must be liable—suable—for censorship, and if they don’t like it, they can shut their doors.  There will be people able to obey the First Amendment willing to take their place.  Our entire voting system must be immediately reformed to eliminate, to the greatest degree possible, vote fraud.

How did Florida and Texas manage to count and report their vote totals on or about election day?  If they could do it with twice and more the population of the other listed states, why are the rest still counting?  Why do they claim to need all that time?  Obviously, so they can find out exactly how many Biden votes they have to manufacture.

Joe Biden tells us he’s going to unite us.  He’s had a major hand in dividing us, and even if he’s sincere, he’s a 47-year failure at doing just that.  His handlers absolutely don’t have that intention, though they surely intend to “unite” us under the iron hand of despotism.  Besides, even if he’s elected, he’s not going to be President long.  The entire D/S/C campaign is the biggest and most corrupt bait and switch scam the nation will have ever seen.

More in a new article tomorrow…