With only a few days before the 2020 presidential election, which may not be decided for months, let us, gentle readers, take a moment to examine the state of America, and to a lesser degree, the world:

Item:  When we see an American flag waving in front of a home, we can be certain the residents are not Democrats/Socialists/Communists.

Item:  D/S/C ruled cities are either economic ghost towns, in flames, or both.  Philadelphia is the most recent, because the police were forced to shoot a black man attacking two officers with a knife.

Item:  D/S/Cs are not satisfied with the possibility of taking total control of the presidency and Congress.  They want to punish and destroy, in every way possible, their political opponents:

When this nightmare is over, we need a Truth and Reconciliation Commission,’ tweeted Robert Reich, the progressive former Labor Department secretary to former President Bill Clinton and adviser to President Barack Obama. ‘It would erase Trump’s lies, comfort those who have been harmed by his hatefulness, and name every official, politician, executive, and media mogul whose greed and cowardice enabled this catastrophe.’

Item:  The rulers of D/S/C cities, and Washington D/S/Cs, are finally learning they can’t control the monster they created and unleashed:

At the Time Warner Center on Columbus Circle, where the penthouse is going for $62.5 million, managers are deploying off-duty cops with ‘submachine guns’ to stand watch, while other wealthy city enclaves are also beefing up protection for residents.

Twitter briefly suspended the account of U.S. Customs and Border Protection (CBP) Commissioner Mark Morgan on Wednesday after he touted the success of the wall along the southern border, according to The Federalist.

Citing ‘screenshots shared exclusively with The Federalist,’ the organization reported that Twitter locked Morgan’s account for violating its

Item:  In France, the religion of peace continues to peacefully behead innocents:

A knife-wielding jihadi beheaded a woman and murdered two others at a church this morning in southern France.

Item:  Despite the economic damage wrought by the Coronavirus, the economy grew by 33.1% in the third quarter—an all time record. 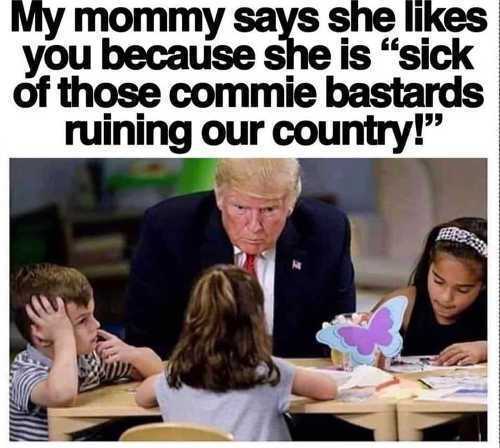 We find ourselves, gentle readers, embroiled in a presidential race that some would have us think is all about the character of the candidates.  Even some Republicans think Donald Trump unfit for the office because he is sometimes intemperate.  He tweets and says mean things, and doesn’t always act “presidential,” “presidential” apparently being defined by Hollywood’s idea of the enlightened morality and intellect of fictional Democrat presidents.  For Never Trumpers, butt hurt by Mr. Trump’s factual denunciations of them, Mr. Trump’s supposed character flaws are so egregious, they’d rather vote for Joe Biden—actually Kamala Harris—knowing his policies would actually destroy America, Israel, and badly damage our allies.  Apparently, they think their new D/S/C rulers would give them some role in ruling the rubble and invite them to the right cocktail parties.  Perhaps they’d even be allowed to publish, providing they said the right—left–things.

I know not what course others might take, but as for me, give me a president that says what he means and means what he says, that fights the enemies of America, that keeps his promises and that actually loves America and Americans.  A president that’s mentally sound might be nice too.

We must remember this election is unlike virtually any in American history.  Contemporary D/S/Cs are not the Democrat Party of the past.  The contemporary Party is utterly dominated by socialists and communists, and they’re hell bent not only on taking power by any means necessary, but on destroying their political enemies, and ensuring they will never again lose political power.  They mean to establish, as in California, a one-party country, which is of course, the nature of communist dictatorships.

Keep in mind when I speak of socialists and communists, the primary difference is communists are socialists in a hurry.  Socialists will destroy your ability to make a living, socially ostracize you, even imprison you.  Communists will do all that, but are just as likely to kill you first to avoid all the trouble.  I’ve included the mention of the jihadist attacks in France because contemporary D/S/Cs are very much the allies of jihadist states and organizations that are also very likely to simply kill those they hate.  Think I’m exaggerating?  Apparently you don’t know much about history. 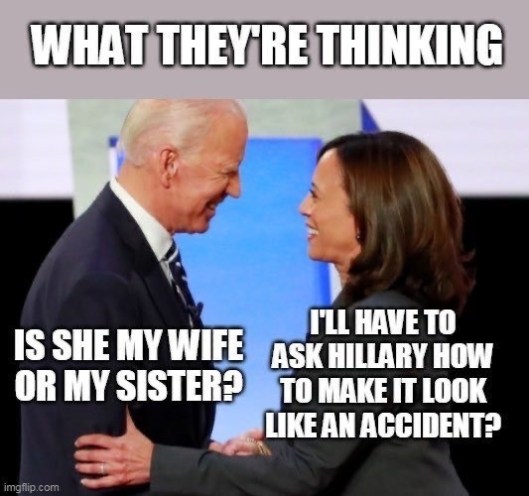 And no longer can Americans believe the candidate running on the D/S/C ticket is actually the candidate that will govern as president.  Joe Biden is the ostensible presidential candidate; Kamala Harris will, in short order, be the president, and she is, in the estimation of the media, the most leftist senator in the US Senate, more socialist/communist then even Bernie Sanders.  Her response to questions about her political philosophy is to cackle nervously and refuse to answer.  Joe Biden has sworn his will be the most progressive administration in American history.  If he remembers that, he may even believe it.  He has no idea how right he is, except he will not be president for more than a few months—perhaps weeks. 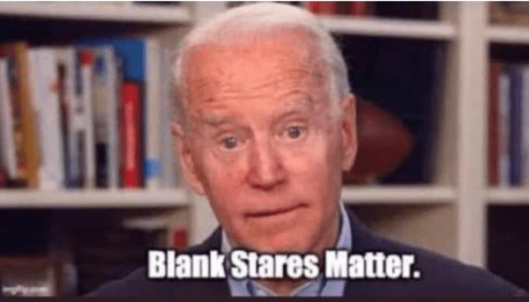 Don’t D/S/Cs know Joe Biden is suffering from dementia?  Don’t they know he’s physically and mentally unfit for the presidency, actually, for any job?  Of course they do, and they’re using him.  His family is using him—his family.  Why do you think he’s been mostly hiding in his basement?  Because it’s a smart tactic?  No, because he’s failing more every day.  Recently, he said he was running against “George.”   His wife Jill, sitting beside him, can be seen whispering “Trump” at least three times before he caught on and corrected himself.

At a rare public appearance, Jill was speaking, and Joe was caught on camera, on stage, wandering aimlessly behind her. 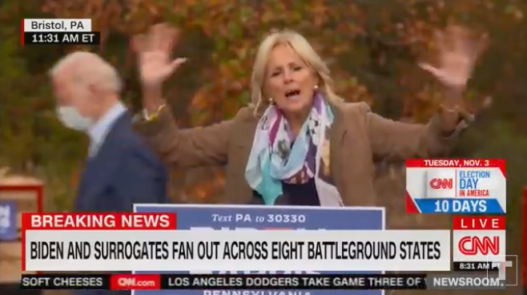 Biden, even if firing on all cylinders, would probably not to go full communist.  That would allow him the benefits of the current status quo.  He could continue to enrich himself and his family and reap all the benefits of the support of the deep state.  But that’s not the plan of his handlers.  They’re going full communist, and Joe will be a 25th Amendment speed bump.  Does he know?  Is he part of that plot?  What difference would it make?

Remember how the Obamites weaponized every element of the federal government against their political enemies?  Remember their failed, yet ongoing coup attempt against President Trump?  Remember what they did to countless honest Americans?  Imagine what they’ll do when they get absolute political power.  Will they suddenly develop a conscience and an appreciation for American constitutionalism?

These terrible people have, for the first time in history, explicitly said what they’re going to do to us.  No one has to guess.  For them, free speech, free exercise of religion, and gun ownership are deadly threats, as is ownership of private property and individual prosperity. People must be categorized and dealt with according to those categories.  Black lives matter, but all lives do not, because individual liberty, the foundation of our representative republic, is a direct threat to the power of the state.  The idea of politicians having power only by the will of the people is anathema to them.

I’ll not go in depth into the economic disaster awaiting us.  Go here for a reasonable, and if anything, understated, explication of that.

We can be sure if Harris is elected, governmental regulations will expand exponentially.  The borders will be thrown open and illegals will be given free everything.  Spending will bankrupt the nation.  The destruction of the fossil fuel industry will plunge us into a depression, enrich and empower our enemies, and directly threaten national and world security.  Gas prices will become unaffordable, as will heating and cooling prices, which will scarcely matter, because electricity will become a rare commodity, and a weapon to use against those that oppose the government.  So will access to health care.  Unemployment will skyrocket, and we’ll all share in the economic misery, but as is always the case in communist countries, the self-imagined elite will live like kings. On the positive side, we’ll have far fewer choices to make in stores—those that remain.

Oh, but they’re only going to tax the wealthy!  That will solve everything!  Joe won’t raise taxes on anyone making less than $400 thousand a year; he said so.  Nonsense.  The middle class is where all the money really is.  If you want to see the reality of D/S/Cs schemes, visit this classic 2011 Bill Whittle video.   It’s prophetically accurate for 2020, and clearly explains why D/S/C tax and spend schemes are doomed to failure.  Circa 2020, the numbers are surely larger, but the reality remains.  And the Green New Deal that Joe says he doesn’t support but his website does?  It’s not just about climate.  It’s a D/S/C wish list, a totalitarian wet dream for absolute state control of every facet of American life. 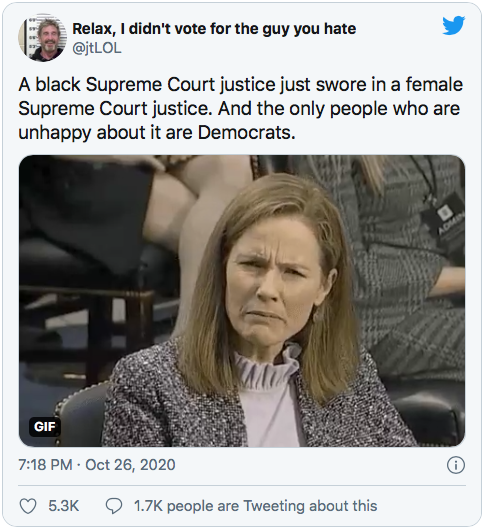 To be able to do all of this destruction and more, they’ll need to make good on their campaign promises, perhaps the first time D/S/C’s have ever intended to honor them.  They’re going to abolish the Senate filibuster, which will allow them not only to pack every federal court, including the Supreme Court, but to pass every insane and ruinous policy they’ve ever dreamed of.  They make Puerto Rico and DC states, giving them four more senators and an eternal lock on the senate.  They’ll abolish the Electoral College, ensuring no Republican, or any other political philosophy can ever win again, and denying much of the country any role in federal politics.  They’ll lower the voting age to 16, ensuring emotional rather than considered votes.

Even these few measures will ensure the destruction of our constitutional system, and that’s before they eliminate the First and Second Amendments.

Civil war?  Bloodshed?  Oh yes, that’s in our future.  They are indeed sufficiently arrogant and stupid to provoke one.  The best outcome of such a conflagration would be the splitting of America into two countries, one that honors a newly strengthened Constitution, and one that descends into communist degradation and insanity, just as Kurt Schlicter describes in his series of novels.

We have a choice of crystal clarity on November 3rd, or whenever things are settled by the Supreme Court:

Choice A: retain the most prosperous and free nation in history, the nation that has repeatedly saved the world and lifted untold millions out of poverty.  Retain the constitutional republic that secures our liberties and rights to property, and above all, the right to be left alone by government.  Retain the nation that allows us to live in peace with our neighbors and that recognizes the dignity and value of every life. Retain the system that allows everyone to succeed on merit, on their own abilities and determination.  Reinvigorate the rule of law so no one has to worry about riots and looting.  Retain a president whose policies have not only produced unprecedented opportunity and prosperity, but have established genuine peace in the Middle East, and has not involved us in new wars.

Zenkus is a Columbia University professor

Choice B: Throw that all away and embrace the political/economic ideas that have not only spectacularly failed wherever and whenever they’ve been tried, but have cost hundreds of millions of lives.  Embrace truth and reconciliation commissions, which are the instruments of Marxist oppression, and will be only the beginning of the horrors to come.  Elect a candidate that is, in his words and being, a lie, and let D/S/Cs get away with playing bait and switch with the presidency.  Oh yes, and allow the deep state to not only get away with trying to depose a lawfully elected president, but to solidify their grip on power, power they’ll use as such people do in all communist dictatorships.  Elect people who hate America and Americans, who think us all racist and every “ist” one can imagine, and who are absolutely going to punish us in every way they can imagine for our imagined faults.

It shouldn’t be a difficult choice.