Traditionally, Americans have looked for an “October Surprise,” which is some sensational—we now call them “bombshells”—story about whichever presidential candidate the media disfavors.  Circa 2020, the media are the propaganda arm of the D/S/C party, and “bombshells” are exploding virtually daily, always against President Trump, and always amounting to less than popcorn farts.  Professor Jacobson at Legal Insurrection reports:

The media attacks on Trump have followed a pattern for years: A bombshell media report implicating Trump in wrongdoing, often dropped just before a weekend, which creates a media feeding frenzy for 2-4 days before it is completely disproven or seriously cast into doubt. As that crisis news cycle peters out, another bombshell is dropped, rinse and repeat.

It’s what I called in 2018 the Permanent Crisis New Cycle:

Since Mueller was appointed in May 2017, after James Comey was fired as FBI Director, we have been in a perpetual 3-5 day ‘scoop’ news cycle based on the Mueller probe.

For over a year barely a week goes by that some publication doesn’t publish a ‘scoop’ about what Mueller is thinking, who his team is talking to, what they might do or might not do, and so on. The Mueller probe is the media gift that keeps giving, usually based on anonymous sources.

Just as each breathless and frequently demonstrably inaccurate media firestorm has died down — Wait, another Big Scoop. Let’s start a new news cycle. It never ends ….

This permanent crisis news cycle reporting is reflected in an article in The Atlantic, conveniently dropped just before a long holiday weekend, which follows on the heels of a bombshell and since discredicted CNN report that Trump suffered ‘mini-strokes’. As the ‘minti-stroke’ feeding frenzy was petering out, The Atlantic’s Editor-in-Chief Jeffrey Goldberg reported Trump: Americans Who Died in War Are ‘Losers’ and ‘Suckers’. Based entirely on anonymous sources identified only as former Trump administration officials, the heart of the controversy is Trump supposedly canceling a trip to an American military cemetary during a trip to France in 2018:

‘When President Donald Trump canceled a visit to the Aisne-Marne American Cemetery near Paris in 2018, he blamed rain for the last-minute decision, saying that ‘the helicopter couldn’t fly’ and that the Secret Service wouldn’t drive him there. Neither claim was true.

Trump rejected the idea of the visit because he feared his hair would become disheveled in the rain, and because he did not believe it important to honor American war dead, according to four people with firsthand knowledge of the discussion that day. In a conversation with senior staff members on the morning of the scheduled visit, Trump said, ‘Why should I go to that cemetery? It’s filled with losers.’ In a separate conversation on the same trip, Trump referred to the more than 1,800 marines who lost their lives at Belleau Wood as ‘suckers’ for getting killed.’

Goldberg claims four anonymous sources.  And why did these brave patriots wish to remain anonymous?

This is what we’ve come to in 2020?  Americans afraid of “mean tweets?”  I was about to ask: “what has become of journalistic standards and integrity?” but that can be nothing more than a rhetorical question these days.  Jacobson provides a partial answer:

Why would Jeffrey Goldberg risk completely trashing The Atlantic’s reputation? What reputation? The Atlantic is now owned by Steve Jobs’ widow, who has donated at least a half-million dollars to Biden.

It’s also suspicious that an anti-Trump group Vote Vets had polished ads on air within hours of the story breaking. It smells like collusion.

It is collusion, and we’re going to be seeing it daily until and after election day. Goldberg would do this too because D/S/Cs need to try to harm Trump’s popularity with the military, who well know the difference between someone who uses them–Obama–and someone that actually loves them–Trump.  I wasn’t going to write this story.  The bombshell was revealed to be a dud almost immediately, but I collected a good bunch of tweets, which tell the story well, and I needed to get them off my computer desktop:

Schlichter is surely correct.  This is nearly the best evidence the story is a hoax:

John Bolton is no friend of Donald Trump.  His honesty in setting the record straight is powerful evidence the story is fraudulent.  And so is this: 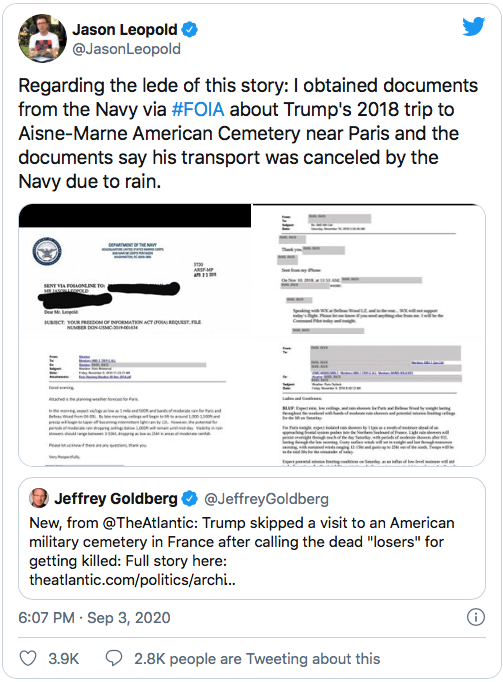 Checks of weather records also prove the story fake.  Some are claiming the President could have driven the 90 or more minutes to the cemetery, but that too is grossly misleading.  The President of the United States does not travel, and certainly not by car on two lane roads in a foreign country, without months of advance work necessary to ensure his safety.

Are there non-anonymous sources, people that were actually present when the decision to abort the cemetery flight was made?  Why yes, yes there are:

Oh.  This is also convincing:

At last count, at least 15 people who were actually present, and/or have first hand knowledge of exactly why the cemetery trip was cancelled have gone on the record.  I’m sure the number is even larger now.  I don’t know about you gentle readers, but unlike D/S/Cs who believe truth over facts, as Gropin’ Joe Biden said, I tend to like the fact stuff.  And if you’re still a bit truthy, consider this from Matt Margolis at PJ Media:

Jeffrey Goldberg, the editor-in-chief of The Atlantic, admitted that a key detail of his article about Trump could be wrong during an interview with CNN on Sunday. [skip]

At least fifteen Trump administration officials who were with Trump on that trip have now disputed the Atlantic report, including former national security adviser John Bolton.

FOIA documents have also definitively proved that Trump’s visit to the cemetery was canceled due to weather. When Goldberg was asked about evidence that the cancelation was due to inclement weather, he admitted that it was likely true. 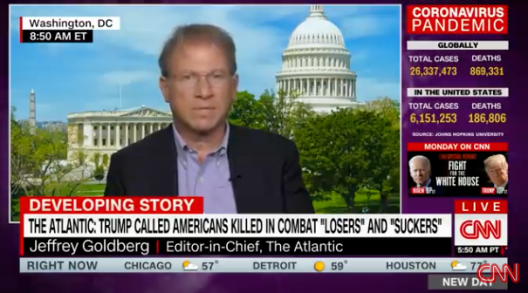 ‘I’m sure all of those things are true,’ he told CNN.

Uh, I’m not a highly professional, erudite journalist, but if the central claim of this story—that President Trump canceled the trip not because of the weather, but because he hates dead troops—is fake, does it matter how many anonymous sources claim otherwise?  I know since Rathergate, the media’s standard is “fake but accurate,” but geez…

Despite this, Goldberg still defended his article, claiming that ‘the public’s interest in meeting this information outweigh the ambiguities or the difficulties of anonymous sourcing.’ Goldberg also said he would continue to publish similar stories.

Let me, gentle readers, refresh your memories regarding “fake but accurate.”  Dan Rather, then of CBS, went on air with a breathlessly bombshell story that George W. Bush, while serving in the Texas Air National Guard, somehow didn’t do his duty, and as evidence, presented various documents said to have been written by Bush’s then-commander, then conveniently long deceased.  Within hours, bloggers were able to prove the documents were contemporary forgeries, not produced on the IBM typewriters of the time, but on contemporary computers using Microsoft Word. Rather held out for about a week before he was forced to admit the couldn’t prove the story, which is when he called the documents “fake but accurate.”  A number of CBS hoaxters were immediately fired, and Rather was allowed to remain employed for a few months before “retiring.”  To this day, he maintains the story was fake but accurate.

“Fake but accurate” has since become the media’s standard: “OK, so it’s all a lie, but it ought to be true because that’s the way reality would be if our ideology reflected reality, which it doesn’t, but it ought to.”  In other words, fake news is true because it’s fake, and don’t bother us with the facts.  Circa 2020 the media just knows Trump is Hitler and worse, so anything alleged about him is truth, and the facts don’t matter.

Expect much more “truth” between now and election day.

8 thoughts on “Trump: A Fake But Accurate Popcorn Fart”