Last week, in School Secrets, I wrote of a Philadelphia English teacher upset with new webcam learning requirements.  He didn’t want parents to know instead of teaching English, he was teaching leftist propaganda about race, gender and sex.  I also noted I was sure such things were going on elsewhere, suspecting I would not have long to wait to find some of them.  The Tennessee Star vindicates that expectation:

Parents of students who attend Rutherford County Schools (RCS) must agree not to monitor their child’s online classroom sessions.

Officials at all county schools are asking parents to sign forms agreeing not to watch these virtual classes.

The Tennessee Star received a copy of such a form this week.

‘RCS strives to present these opportunities in a secure format that protects student privacy to the greatest extent possible, however because these meetings will occur virtually RCS is limited in its ability to fully control certain factors such as non-student observers that may be present in the home of a student participating in the virtual meeting,’ according to the form.

‘RCS strongly discourages non student observation of online meetings due to the potential of confidential information about a student being revealed.’

The form asks parents for their signature and warns that ‘violation of this agreement may result in RCS removing my child from the virtual meeting.’

Were I a parent in that school district I’d eliminate the necessity of “violation of this agreement,” by immediately removing my child from that district.  What’s obviously going on is this school district doesn’t want parents seeing what’s happening in classes.  Unfamiliar with this particular school district, I don’t know if that’s because they are leftist propagandists rather than educators, they’re simply incompetent, imagine they’re the masters of the public rather than their employees, or some combination of the three.  Stung by reasonable public outrage, their “explanation” is revealing:

RCS spokesman James Evans addressed the matter in an email to The Star this week.

‘We are aware of the concern that has been raised about this distance-learning letter that was sent to parents. The intent was not to prevent parents from being involved with their children during distance learning, but it was intended to protect the academic privacy of other students in the classroom who are visible during certain virtual class sessions,’ Evans said.

Oh really?  And how would one tell the difference?

‘We have issued new guidance to principals that parents can assist their children during virtual group lessons with permission of the instructor but should refrain from sharing or recording any information about other students in the classroom.’

Evans did not elaborate.

No.  I imagine not.  This is utter nonsense.  Have you noticed, gentle readers, they’re not really addressing the issue, nor are they saying they were wrong in making demands for parent’s signatures.  Notice too, they haven’t rescinded that demand.

It’s true schools have legal responsibilities to safeguard student records from those not lawfully allowed access to them, but incidentally showing a given student’s face or their participation in a lesson broadcast over the Internet does not normally invoke those protections.  Were this not so, schools could not publish yearbooks, or allow any member of the public to attend pep rallies, school plays, musical performances or athletic contests, where the exposure of students would be arguably greater than the exposure they’d get by being present in a classroom where a lesson was being broadcast.

Evans and his “superiors” are apparently an all-too-common breed of educrat: they think themselves superior to the public, their masters rather than their employees, and they become indignant when mere parents question their morally and intellectually superior policies.

Distance learning for children in K-12 has caused some significant changes for parents, children, and teachers during the pandemic. For many parents, it has also raised some concerns over classroom content. This story from a school district in Tennessee should set alarm bells ringing.

The social-justice movement has been pretty successful in pushing its curriculum down to the lowest grades. A startling example of this was shared by one of the founders of the news website Breaking911.com. After his daughter’s first day of 2nd grade, he announced on Twitter that she would not be returning to her school.

His tweets gained some traction, and he interviewed with 99.7 WTN in Nashville, where his daughter’s school was located. Here’s why those tweets gained traction:

I’ll give those “educators” a likely undeserved benefit of the doubt.  Perhaps they really believed this kind of curriculum served some vital educational purpose, though it’s hard to imagine what it might be, after seeing something like this: 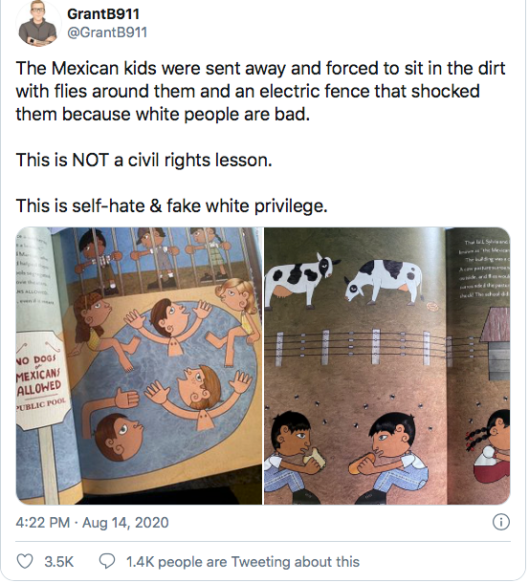 Where, pray tell, in 2020 America, are children of any race denied entry to a public pool or public school?  What then, could the purpose of that kind of racist propaganda be?  To tell children being white is evil?  This is the kind of moral, intellectual superiority educrats imagine they possess?  No wonder they don’t want parents knowing what they’re up to.

I occasionally dealt with misguided parents who didn’t really know what I was teaching or how, and fortunately, after showing them exactly what I was doing and why, they were satisfied.  Parents, whose property taxes pay educator’s salaries, have every right to know exactly what their children are being taught and how.  When educrats don’t want parents to know what they’re doing, that’s a sure sign they’re doing something very wrong.

“Distance” or “Online” learning are poor substitutes for competent in-class instruction, and they’re going to do a great deal of damage to kid’s educational opportunities, but if they make more parents aware of the kind of evil leftist propaganda that is taking the place of instruction in some schools and some school districts, something good may come out of a politically motivated response to Covid-19.  Parents with children in those schools and districts definitely must not shut up.