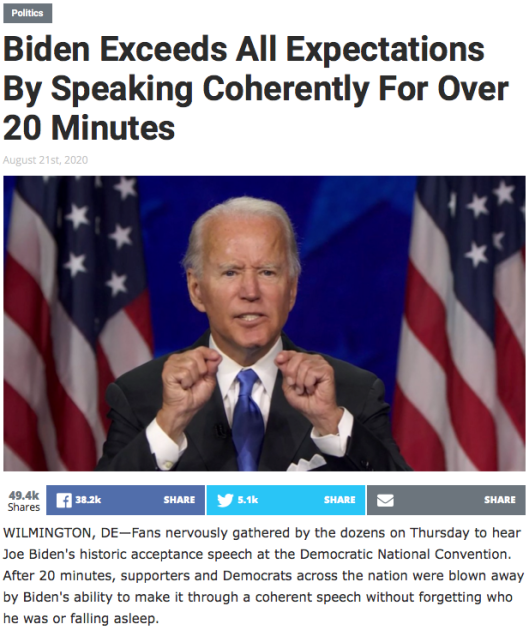 Well gentle readers, the 2020 Democrat/Socialist/Communist Convention has finally, mercifully, sputtered out.  I’ll begin with a brief—briefer than planned—recap of the third night, and conclude with, mostly, a critique of the Biden speech, which talking heads are calling among the great speeches of humanity.  I’ll include live blogged comments from the PJ Media crew, and information from other sources.

The first two nights of the convention carefully avoided any specifics about D/S/C policies, and the final two nights were no different.  What they did do was attack fundamental liberties, including the Second Amendment, prosperity, national security, and other evil concepts.

No one at the convention has, in any way, acknowledged the mob violence wracking D/S/C controlled cities, and they certainly haven’t denounced it.  After all, Antifa and BLM are their troops.

They have, however, been harping on Covid-19, which is Trump’s fault, of course. Kerri Washington, was the moderator of sorts on the 3rd night, whoever she might be.

Mastery of irony and logical consistency are not their strong suits:

Yes.  They’re serious.  This is what passes for heroism among high-level D/S/Cs:

Well, he is their messiah…

Hillary Clinton gave a little talk, reminding everyone just how lucky we were to dodge that particular bullet.

Unfortunately, we haven’t yet dodged the Pelosi bullet…

The D/S/Cs are not exactly burning up the airwaves…

A little about Obama’s speech. He hasn’t learned anything.  He talks, but provides no substance.  His arrogance is insufferable, and it’s clear how very disappointed he is in us all.  He spent most of his mercifully short speech attacking Trump, and talking about how wonderful Barack Obama was/is.  He said Trump has “shown no interest in putting in the work.”  This from the laziest, least hard working president in American history.

Towards the end, he got around to talking a little about Gropin; Joe:

And then there’s this:

Followed by these good points:

See what I mean by arrogance?  He didn’t stop the seas from rising or heal the planet, and now Gropin’ Joe is going to save the planet?

This is truly scary:

I’ve previously mentioned the poor production values.  Cheering “Comma-La’s” acceptance speech was a montage of ecstatic followers, except there were apparently so few, they had to duplicate some of them: 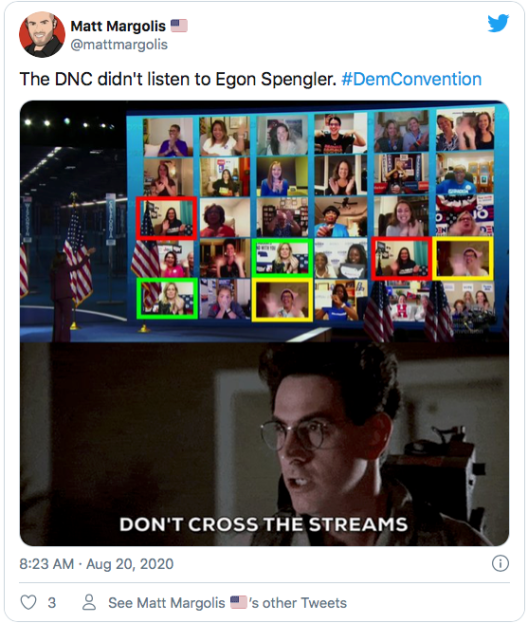 Lisa Boothe sums up the convention to date:

Yes, and Obama, Clinton And Harris on integrity in office.  The final night of the convention was marked by a number of odd attempts to insert a few religious messages, on the part of people who have no religious devotion and absolutely despise those that do, like one Sister Simone Campbell, an “activist” nun, who called God “oh divine spirit.”  Equally oddly, Gropin’ Joe is promising a medical miracle:

As I mentioned, the talking heads are praising Joe’s teleprompter reading:

Even Fox’s Chris Wallace proclaimed that because Joe mostly didn’t dissolve into a morass of dementia onstage, that proves he’s not really suffering from dementia—or something—and will somehow be a formidable speaker in the future.  Joe is still refusing to be interviewed by Wallace, which Wallace didn’t’ mention.  The truth is, Wallace and others are praising a very, very low bar performance that will not in any way help Biden in the future when he has to speak without a teleprompter, or answer actual, unscripted and rehearsed questions.

I’ve often observed this, but President Trump does not look his age, and speaks extemporaneously with fluidity and ease.  Joe Biden looks much older than his age.  His forehead is unnaturally tight—Botox?—and was all but immovable throughout the speech. He frequently tried to frown, but seem unable to move his forehead, and looked constantly strained. His hair looked as though he’d been wearing a baseball cap all day, flaring outward above his ears.  At least once, he tried to brush it out of the way.  You can view the whole thing here and see what I mean.  He is wearing heavy makeup, his eyes are squinty, appear dull, and he speaks in a slow, unnatural voice, as though very carefully pacing himself, showing little emotion, vocal variety or variation in pace.  His speaking is littered with micro pauses between words, phrases and sentences, and despite the lies of those trying to call his speech brilliant, whenever he forgot his obviously carefully rehearsed pacing, and took his eyes off the teleprompter, he gaffed:

There’s never been anything we’ve been able to accomplish when we’ve done it together.

Mr. Biden’s eyes were essentially glued to the teleprompter, and his affect was curiously depressed.  He looked tired indeed.  One wonders what cocktail of drugs he was on?  Only at the very end did he begin to speak loudly and with a watered down version of passion.  One imagines the TP screen read “louder and passionate!”  The speech was very obamaesque: long on “soaring” rhetoric, and utterly devoid of substance.

Joe is going to unite everyone, apparently by raising taxes, destroying America’s energy independence, legalizing millions of illegals and throwing open our borders, taking away our firearms, packing the Supreme Court, and ensuring no one is allowed to speak or vote the wrong way in the future.  He was all about hope (and change—haven’t we heard that somewhere before?) and we learned that compassion, democracy, character, decency and science are all “on the ballot.”  He’s all about the Green New Deal, which will create millions of jobs, with tax cuts somehow thrown in.  No.  It made no sense.

The speech tried to, on one hand, depict America as a horribly racist nation that needs to be saved:

We can lay down the burden of hate,

while simultaneously calling it a great country.  Interesting who is demonstrating a burden of hate that needs to be laid down.  It isn’t normal Americans burning D/S/C controlled cities.

Barack Obama was the “lightbringer” or “lightworker,” whatever those might be, and that mantle is falling on Joe:

The current president has cloaked America in darkness for much too long. Too much anger. Too much fear. Too much division.

Here and now, I give you my word: If you entrust me with the presidency, I will draw on the best of us not the worst. I will be an ally of the light not of the darkness. …

For make no mistake. United we can, and will, overcome this season of darkness in America. We will choose hope over fear, facts over fiction, fairness over privilege. …

May history be able to say that the end of this chapter of American darkness began here tonight as love and hope and light joined in the battle for the soul of the nation.

“Season of darkness?”  We’re locked down and wearing ineffective masks because D/S/Cs think that will help them win the election.  They’ve badly damaged our cities and economy, and it is their shock troops in the streets. Even so, Mr. Trump’s policies are helping us rebound with unprecedented speed.  From where does this “darkness” emanate?  Biden’s comments on Covid-19, apart from being entirely lies, suggest strongly his solution is eternal lockdowns and masks.  He also said if “scientists” said so, he’d lock down the entire country.

Of course he would.

The job is about a lot more than a paycheck.

Apparently his speechwriters don’t know Mr. Trump is not accepting a paycheck, and has lost about a billion dollars thus far.

So we have a man who spent a half-century at the highest levels of government now telling us he’s finally going to fix everything, everything he didn’t fix all those years.

The convention ended with fireworks in the back parking lot of the convention center, with a few cars scattered about, their emergency flashers flashing.  Throughout the entire convention, we learned Donald Trump is bad, very bad, so bad you can’t believe it, and he’s going to destroy the universe.  We’re all racist, sexist, homophobic, transphobic, and in general, terrible, terrible people in a horribly racist nation, that only D/S/Cs can heal.  Biden spoke not a word about the mob violence his party supports, manipulates and hopes to profit from.  He spoke not a word about China.  For 50 years he has been wrong on virtually every foreign policy issue, even killing Bin Laden, and he continues to reveal himself as a fundamentally unserious person.

But what, exactly, will Joe’s policies be?  Apart from bringing hope, love and light to the darkness?  Oh yes, and taking our guns and making us shut up?  We’ve no idea.  They really don’t want us to know exactly what they’re going to do to us, though their unguarded rhetoric throughout the last year is surely a good indication.  It has nothing to do with Democracy, and would transform America into something resembling Venezuela and every other failed socialist/communist dictatorship.

What remains to be seen is what they’ll do with Joe now.  Despite their praise for what is really only a “C” level teleprompter reading, his handlers know he’s not up to answering the kind of tough, unscripted questions President Trump fields every day.   They also know he’s absolutely not up to two hours on a debate stage, regardless of how much the D/S/C moderators try to help him.  Will they try to keep him under wraps as they have to date, or throw him out there as though he were a normal, mentally capable candidate?  If Joe can emerge from his basement, doesn’t that mean people can go to the polls, and the whole ”vote by mail” wail is a scam?

Surely, they’re calculating the damage dropping out of the debates would do, as well as the damage refusing to submit to normal interviews would cause.  Or perhaps they’ll let him spectacularly flame out so they can, at the very last minute—that may be the October Surprise—replace him with a savior, like say…Michelle Obama?  Didn’t all the talking heads say she’d be a better president after her little speech?  Why, I believe they did.