There are many beliefs and habits that separate D/S/Cs and normal Americans.  Mark Twain anticipated this ever-widening chasm separating red and blue America with this aphorism:

Nothing so needs reforming as the habits of others.

I’ve often written about enlightened D/S/Cs who venture out into deepest, darkest Flyover Country to spend time on a sociological/political/archeological expedition among the strange and unfathomable natives.  Usually, they have good intentions, and try—in their fashion–to find at least some good among Deplorables.  But inevitably, after observing, even interacting with the animals in their native habitat, they just cannot reconcile the beliefs of people that believe in liberty, prosperity, free speech, private property, the Constitution, justice for all, faith in God, and limited government—oh yes, and pickup trucks–with their intellectual and moral superiority.  Two examples may be found here and here.

Probably the practice of normal Americans that disgusts and repels D/S/Cs most—after gun ownership, of course—is the keeping and bearing of pickup trucks.  They believe anyone that would so much as think of owning a pickup surely shops at WalMart, smells, has regular sex with farm animals and close relatives, is missing teeth, and worse—shudder—votes for Trump.

I last wrote on this topic in January of 2018 in The Pickup Habits Of Others:

OK, so the F150 is the most popular vehicle in America, and other vehicles aren’t even close. But surely reporters and other elites don’t still harbor such pajama boy ideas today? National Review explains:

It’s been five days, and 2017 already has its first big debate about journalism, courtesy of a tweet by Decision Desk HQ’s John Ekdhal: The top 3 best selling vehicles in America are pick-ups. Question to reporters: do you personally know someone that owns one? — John Ekdahl (@JohnEkdahl) January 4, 2017

It’s telling that such a seemingly innocuous question has sparked heated responses from so many of the reporters of which it was asked. Ekdahl’s point was that for a journalist to not know a single person who drives the country’s most purchased automobiles suggests that they live and operate in a cultural bubble. As Kevin Williamson and Jon Gabriel have pointed out, almost every community in America is unique, making it a cultural bubble in one way or another. But given that we’ve just emerged from a presidential campaign that the national media got wrong at nearly every turn, this particular cultural bubble would seem to be due for some self-examination.

The true journalistic sin is not a lack of friends with pickup trucks, but a lack of curiosity about the millions of Americans outside of major cities who own them, if you’re going to be writing about those Americans.

Many in the media responding to Ekdahl’s innocuous question belched a torrent of raging anger, obscenities and venom.  Such was their opinion of the pickup habits of others.  Such people assume they are intellectually and morally superior to normal Americans, and anyone that does not think, act, speak and live as they do must be a lower form of life, fit only to be forced to think, act, speak and live correctly.

Unfortunately for them, only about 5% of Americans commute to work on public transportation.  They are not the norm, not by any stretch of the imagination.  And here’s the really bad news.  According to Car And Driver, the top three best selling motor vehicles in America in 2019 were—drum roll Maestro, please—pickup trucks!

Numbers four and five, with 448,071 and 384,168 units respectively were small SUVs, the Toyota Rav4 and Honda CRV.  One doesn’t find a traditional four-door sedan until 8th place, the Toyota Camry, with 336,978 units sold.  Ford F-series trucks have been the number one seller for many years.  Is it possible all of those pickup owners are doing the nasty with farm animals?  Where are the farmers?

Circa August of 2020, the sensibilities of D/S/Cs are rubbed rawer than usual by the refusal of normal Americans to do what’s best for them, and in that spirit, one Ryan Cooper of The Week, has discovered the real reason for the marketing and sale of “mega-pickups”: the wholesale slaughter of innocent pedestrians, as Powerline reports:

I know there are thousands of crazy Tweets available every minute of the day, but this thread, from a certified blue check marker (a ‘national correspondent’ for The Week), is certifiably demented:

Here’s the news story behind it. By the way, only ‘hundreds’ of conservatives buying pickups? Um, I have some news for Mr. Cooper (or is it Ms. Cooper?).

It’s mister–sort of.  I’ve helpfully provided that glimpse of reality a few paragraphs earlier.  And what is the evidence of this newly discovered evil?  Is there actual, verifiable, replicable data and other evidence that not only proves American car manufacturers are producing these vehicles with the intention of servicing a segment of Americans whose fondest wish is to run down and kill unwary pedestrians?  Has there been a dramatic increase in the number of people run down by “mega pickups?”  Are pedestrians, intimidated, fleeing, horrorstruck, at the mere sight of pickup trucks?  Uh, no, no and no.  Are “mega-pickups” whatever they might be, some new phenomena?  A dangerous new manifestation of the Age of Trump?  Some new horror for which he, setting an atmosphere of running down pedestrians, is responsible?

The news story to which Powerline alludes is full of the same kind of armchair, neophyte psychosexual analysis that holds gun owners choose their weapons as substitutes for tiny, flaccid penises. But you could see that coming, couldn’t you, gentle readers?  Imagine how inadequate Deplorables must be if they need a “mega-pickup.” It’s rather short on what former newspapers once called “proof,” quaint and unnecessary as that concept is now seen to be.  Mr. Cooper, as one might expect, has like-minded support:

Though not everyone is amused:

And some are engaging in proper mocking: 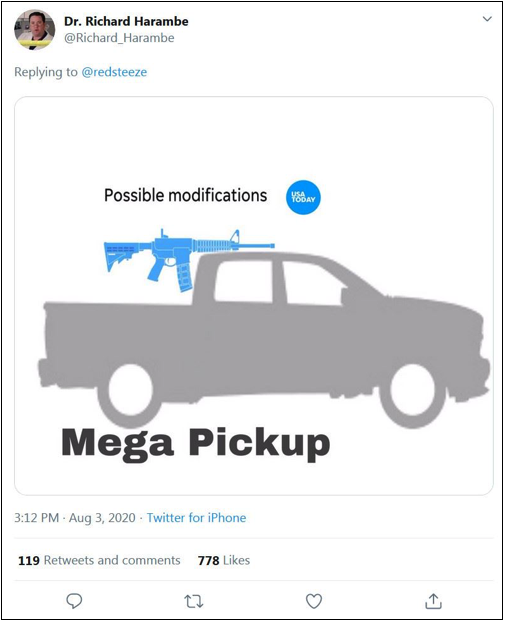 But because I am fair minded and actually seek out evidence, I must provide full disclosure: yes, Mrs. Manor and I keep and bear a 2016 Ford F-150, four wheel drive pickup truck.  We actually bought it in 2017, and because it was one of the few remaining new 2016 models on the lot, got a very good deal, but we still ended up paying more money than I ever imagined paying for a motor vehicle.  It’s well designed, flexible, relatively luxurious, comfy, with pretty much any feature you could find on a luxury SUV or sedan, gets good mileage, handles well, and is fun to drive.  In fact, Mrs. Manor drove it until recently just because she wanted to, and her sexual function is just fine, thank you.

Why would we want such a dangerous, intimidating and downright maniacal vehicle?  As homeowners, we often have large and heavy things to haul, and when we bought it, we knew we were retiring in Wyoming in a few years.  Wyoming is a place that actually has seasons, including winter, which includes snow, so 4WD is handy.  Mrs. Manor now drives our new little Ford Ecosport SUV, which has all wheel drive and is even more fun to drive, just because she wants to.  I’m smart that way.

Until Mr. Cooper’s assertions, I had never heard of a mega-pickup, nor, to my knowledge, have I ever seen one.  On-line dictionaries have no definition, and consulting Google revealed only references to Cooper, and photographs of all manner of trucks, from jacked up four wheel drives, to 1951 2 wheel drive models, to customized, but not generally intimidating, pickups.  To be sure, I’ve seen Ford F-250s, and even F-350’s, which are larger, and generally somewhat taller versions of the more common F-150.  They exist not to run people over, but to provide greater hauling and towing capacity, which some pathetic denizens of Flyover Country seem to think they need.  Some of these vehicles might have raised suspensions for greater off-road capability, which would make them taller than average, but I remain unaware of just what a “mega-pickup” might be.  Could it be the “assault weapon” of the pickup world?  Must it, like “assault weapons,” be banned for the safety of the public? Has the federal government suddenly decided to allow such deadly vehicles on the road?  Didn’t the Obama Administration deal with this menace?!

To be scientific about it, even realizing math is racist, I decided to take some measurements of my F-150, which is a bit taller than an F-150 without 4WD.  The top of the hood reached a lofty 3’10”, which is substantially shorter than the menacing 6-foot tall fronts of the wary and seldom seen mega-pickup.  I stand 6 feet tall, and lo and behold, the roof of my truck is about 6’ 4” tall, but no one drives sitting on the roof, so that can’t be what Cooper is talking about.  I suppose I may have seen a truck with a hood 6 feet high, but if so, it would have been a rarity, a home made “jacked up” 4WD, not something one buys off a showroom floor, and certainly nothing marketed for that feature.

Having enjoyed our copy of the most popular motor vehicle in America for some three years, I can certify Mrs. Manor and I are no more homicidal than before we owned it.  For some reason its magical powers to compel mortals to murder have had no effect on us.  Nearby farm animals fear us not, and neither do our close relatives.  We do shop at WalMart from time to time, but we regularly bathe and are missing no teeth of which we’re aware.

This appears to be the automotive version of Gersh Kuntzman, the something less than manly reporter traumatized and horrified–he claimed to experience PTSD–by firing an AR-15, the most popular sporting rifle in America.  Pity Mr. Cooper and those like him.  They really cannot imagine why anyone would want a pickup truck, and cannot think too poorly of those that do.  They truly see us as maniacal, homicidal lunatics, driven to bloodlust by guns and pickups.  They not only live in an alternate reality, they really, really hate normal Americans.  As Kurt Schlichter wrote, act accordingly.

What must it be like to spend so much of one’s time obsessing over the habits of others?  Pickup truck bans: coming soon in a fundamentally transformed America?

19 thoughts on ““Mega-Pickups”: Obsessing Over The Habits Of Others”