Prior to the “defund the police” lunacy, the occasional small law enforcement agency has told the public to arm themselves.  This was so because of budget shortfalls, or occasionally, because a rational police executive, usually a county sheriff, decided telling people the truth was preferable to the usual political deception.  But one thing they have not done—until now—is to tell citizens to surrender to criminals.  The Minneapolis Star Tribune, a certified propaganda organ of the D/S/C Party, provides surprisingly accurate background information:

Minneapolis police are down at least 100 officers since the killing of George Floyd — more than 10% of the force — straining department resources amid a wave of violence and adding extra urgency to the political debate over its future.

Over the past two months, 40 cops have resigned, been fired or are in the process of leaving the force, and another 75 have taken a medical leave for post-traumatic stress disorder they say was caused by the riots that followed Floyd’s death. Dozens more are expected to file for leave in the coming months.

MPD officials not authorized to speak publicly estimate the department, which is budgeted for 888 officers this year, could lose as much as a third of its workforce by the end of the year.

A lost of even 10% of the manpower of any police force is dangerous.  A loss of 1/3 is catastrophic.  As I’ve previously written, most of any law enforcement agency’s budget is personnel.  An understaffed agency inevitably runs up huge overtime bills, much greater medical/sick leave bills, and can provide only sharply curtailed services.  Of course, the Minneapolis City Council wants to entirely abolish the police force.

Though total reported crimes were down 31% in June and 4% by July’s end, gunfire incidents, which tie up multiple squads, soared 224% and 166% during the same period, according to MPD records.

Any reduction in “reported crimes” is likely either a lie by a city administration desperate to conceal its fecklessness, or due to citizens just not bothering to report lower level crimes because they know the police can’t—or won’t—respond.

Meanwhile, police stops are down more than 50% each of the last two months.

Department officials declined to make Arradondo or Assistant Chief Mike Kjos available for comment Friday, but a spokesman insists that the department has enough officers on the streets to adequately patrol the city.

‘Right now we have reduced numbers of sworn people due to COVID, midyear retirements and medical leaves. The vacancies are being filled by other sworn personnel,’ said spokesman John Elder. ‘Whereas we have less sworn people than six months ago, we are not seeing staff shortages on any sort of a routine basis.’

Nonsense.  No police agency is ever truly adequately staffed.  Lose 10%–probably more—of any police force, and it’s impossible to “adequately patrol the city.”  Absolutely essential functions are going to be sharply curtailed or ended.

The decreased staffing levels among the MPD’s five precincts is a dilemma for the department, as it grapples with COVID-related budget cuts and sinking officer morale. For instance, a recent Monday night found just six officers patrolling the 14.5 square miles of the Third Precinct, according to MPD officials.

That would be the Third Precinct boy Mayor Jacob Frey abandoned to the mob, which immediately and gleefully burned down the station house.  As always, D/S/C policies hurt those they pretend to most care for: poor minorities:

After months of what they saw as neglect by City Hall and the police, Maria Gali and her neighbors blocked off their street and organized armed patrols in an effort to take back their block from the drug dealers and prostitutes who seem emboldened by the lack of police presence.

‘Sometimes they showed up after one hour. Sometimes they didn’t,’ said Gali, who isn’t part of the suit. Alondra Cano, the council member who represents the area, told residents and business owners in the 2900 block of S. 18th Avenue that officers were deliberating bypassing the area to protest a proposal to dismantle the police and replace it with a new public safety system.

More likely the officers are prioritizing and trying to handle the worst of the worst calls.  People like Cano want to give it to citizens good and hard.  With no police, Minneapolis residents will have a new appreciation of “good and hard.”

For a preview of what “good and hard” is really going to look like, Alpha News explains:

Police in the city’s Third Precinct alone have received more than 100 reports of robberies and 20 reports of carjackings in just the last month.

Officials are now telling residents to be ready and willing to comply with the demands of criminals in an email sent to Third Precinct residents.

‘Be prepared to give up your cell phone and purse/wallet,’ the police said in their email, a copy of which was obtained by Alpha News. The email said citizens should listen to criminals and ‘do as they say.’

The message warned that ‘some victims have been maced, dragged, assaulted, and some threatened with a gun.’

Consider, gentle reader, what the Minneapolis police are saying.  Do whatever criminals want.  They’re in charge.  Give them your money, your goods.  Submit to rape?  Mayhem? Mutilation?  You might be hurt.  No.  What they’re saying is “don’t you dare hurt our precious criminals.”  Honest Minneapolis residents surely understand should they harm a criminal, particularly one whose life matters more than those of any other race, it will be they, not the criminal, facing harsh social justice.

Oh and “memorize your license plate number”?!  the police have computer access to car registration databases.  No rational officer would trust a citizen’s memory of their plate.  With their name, they can have complete and accurate vehicle information within seconds.

In the fall of 1993, Jeffrey R. Snyder published A Nation of Cowards.  It is an essay with which every American should be familiar, particularly in these crazy times.  Consider this excerpt:

And yet, while people are encouraged to revel in their individuality and incalculable self-worth, the media and the law enforcement establishment continually advise us that, when confronted with the threat of lethal violence, we should not resist, but simply give the attacker what he wants. If the crime under consideration is rape, there is some notable waffling on this point, and the discussion quickly moves to how the woman can change her behavior to minimize the risk of rape, and the various ridiculous, non-lethal weapons she may acceptably carry, such as whistles, keys, mace or, that weapon which really sends shivers down a rapist’s spine, the portable cellular phone.

Now how can this be? How can a person who values himself so highly calmly accept the indignity of a criminal assault? How can one who believes that the essence of his dignity lies in his self-determination passively accept the forcible deprivation of that self-determination? How can he, quietly, with great dignity and poise, simply hand over the goods?

The assumption, of course, is that there is no inconsistency. The advice not to resist a criminal assault and simply hand over the goods is founded on the notion that one’s life is of incalculable value, and that no amount of property is worth it. Put aside, for a moment, the outrageousness of the suggestion that a criminal who proffers lethal violence should be treated as if he has instituted a new social contract: “I will not hurt or kill you if you give me what I want.” For years, feminists have labored to educate people that rape is not about sex, but about domination, degradation, and control. Evidently, someone needs to inform the law enforcement establishment and the media that kidnapping, robbery, carjacking, and assault are not about property.

Crime is not only a complete disavowal of the social contract, but also a commandeering of the victim’s person and liberty. If the individual’s dignity lies in the fact that he is a moral agent engaging in actions of his own will, in free exchange with others, then crime always violates the victim’s dignity. It is, in fact, an act of enslavement. Your wallet, your purse, or your car may not be worth your life, but your dignity is; and if it is not worth fighting for, it can hardly be said to exist.

In Democrat-ruled cities, human dignity is a political commodity.  Antifa, BLM, and all their associated thugs and miscreants have the highest value—their lives matter.  Honest, law-abiding citizens, particularly white citizens because of their “privilege” matter not at all.  Poor black citizens matter only slightly more, because they’re just not politically useful, and they complain about the crime their D/S/C intellectual and moral superiors create, support and encourage.

Could Minneapolis Chief Arradondo be defying his political masters?  In Democrat-Ruled cities, one does not become Chief of Police without being, first and foremost, politically reliable.  Thereafter, being black, female, or lesbian—as the Minneapolis Chief prior to Arradondo was (she was also Indian)—are top, essential qualifications.  Issue public pronouncements that contradict the current narrative, “go native” by actually acting like a police officer, and they’re on their way out the door.

Of course, every Minneapolis police officer will be on their way out the door of the City Council has its way.  One might have some small respect for a police agency willing to be completely honest with people, but consider how far Minneapolis has fallen, how utterly deranged it’s “leaders” for the police to issue such a missive.  It’s an admission of a complete breakdown in law and order, an all but complete abandonment of the social contract, a surrender of all norms of civilization to the most uncivilized—including the City Council.

I’ve often written we get the politicians, and the police, we deserve.  Minneapolis is about to get it—good and hard.

PRE-POSTING UPDATE:  As one might—hopefully—imagine, the backlash on the MPD’s surrender message was swift and brutal: 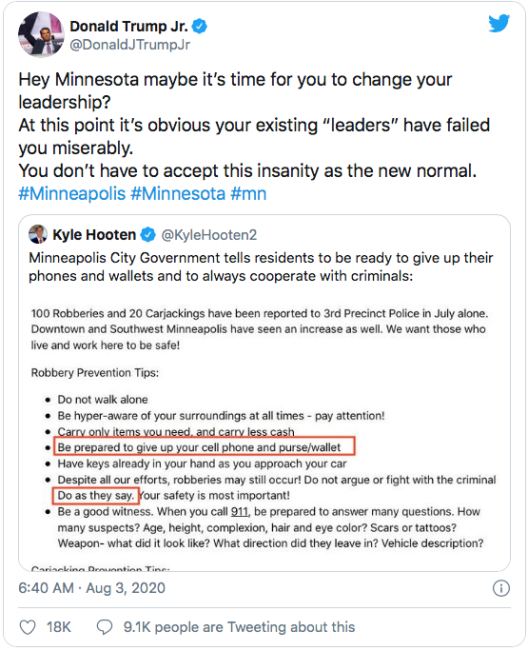 Here’s the walk back attempt from an MPD PR flack: 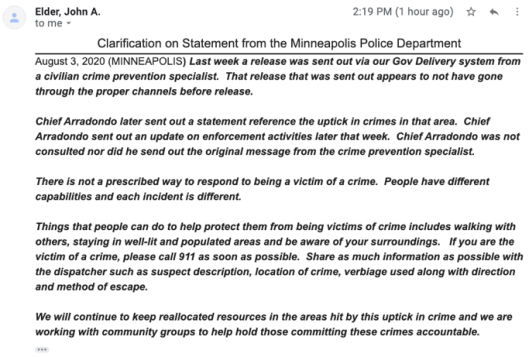 “That release that was sent out appears to not have gone though the proper channels before release.”  “Appears”?!  The MPD doesn’t know?  They have no means of internal communication?

Notice too this was a modified, limited walk back.  They did not tell anyone to fight back.  They did not say citizens have a right to self-defense.  But by golly, they’re going to work with community groups to help “areas hit by this uptick.”  I just hate upticks; you?

Aren’t you glad you don’t live in Minneapolis, gentle readers?

12 thoughts on “Minneapolis: Getting It Good And Hard”