Gropin’ Joe Biden recently, in a classic gaffe, exclaimed D/S/Cs believe in truth over facts.  Facts tend to be stubborn things, and aren’t easily bent to conform to ever-changing leftist narratives.  Reliable history, for example, is made of facts, and any narrative claiming to be history fails if it is based on a foundation of lies—truths rather than facts.  One can claim Abraham Lincoln was a racist who fought to preserve slavery.  One can claim that is “a history,” but the unchanging facts of the Great Emancipator are something else entirely.

A contemporary case in point is The 1619 Project, for which “journalist” Nikole Hannah-Jones won a Pulitzer Prize.  Packaged as history and the truth about America, The New York Times has relentlessly promoted it as school curricula.  You can find my writings on it by entering “1619 Project” in the SMM homepage search bar.

Consider this excerpt from The 1619 Project: Academic Fraud, which I posted in February of 2020:

Anyone that knows anything about this issue and the founding understands that’s just not true.  The issue was far more complex, and many of the Founders abhorred slavery, eventually freeing their slaves, but knew it was not politically possible to immediately end it.  Had they insisted on immediate abolition, the United States likely would not have been born, and the nation instrumental in ending global slavery would have been stillborn.  Hannah-Jones appears to be a stereotypical race hustler:

Ultimately, Hannah-Jones’ hope is that the 1619 Project would make it impossible for white people not to see their privileged status in American society. On the Karen Hunter show, she said getting a reparations bill passed may not be a realistic goal, ‘but it feels more realistic than, like, can we get white Americans to stop being white?’

‘So I don’t know that this project can get white people to give up whiteness,’ Hannah-Jones said, ‘but it can certainly expose for them what whiteness is.’

And what, pray tell, might “whiteness” be, exactly?  This is the woman some school districts think fit to teach American History to children.  Again, gentle readers, read both articles, and be aware this is the type of thing being pushed on schoolchildren throughout America.  Academic fraud—the real thing—is, sadly, alive and well.

Now we discover The 1619 Project was never history, except its pusher has always claimed it is–until now, sort of:

New York Times magazine staffer Nikole Hannah-Jones claimed this week that her infamous 1619 Project is not actually a work of history, but rather an ‘origin story.’

Do the schools that have incorporated the project into their history curricula know about this?

On Monday, Willamette University Professor Seth Cotlar said in praise of the project that it ‘is not about history. It’s about memory; about what parts of the nation’s past we should hold in our memories going forward & about how we tell the story of the nation to our children.’

Uh, don’t we study history that we might remember the facts rather than politicized lies?  Don’t we want to know actual, rather than political, truth about our past?  If history isn’t a factual matter, a production of professional, unbiased scholarship, why won’t any folk tale do?  Why can’t our children remember that America was founded by Luigi Guacamole, the inventor of the Italian taco, in 1527 in Buffalo, Wyoming?

Hannah-Jones, who founded and heads the project, which posits that America’s true founding dates back to the year that slaves were first brought to its shores, was pleased to hear him describe it in such terms.

‘He is right: The fight over the 1619 Project is not about history. It is about memory,’ she responded on social media. ‘I’ve always said that the 1619 Project is not a history. It is a work of journalism that explicitly seeks to challenge the national narrative and, therefore, the national memory. The project has always been as much about the present as it is the past.’

Nice of her to finally admit this is about contemporary political revisionism aimed at seizing political power.  Among the first thing all totalitarians do is rewrite history.

…if the project ‘is not a history,’ then what are we to make of the schools that have updated their history curricula to make way for its faulty central claims? Practically speaking, how does one incorporate the 1619 Project into a straightforward history curriculum?

One doesn’t if one cares about accuracy, fact and not lying to children. 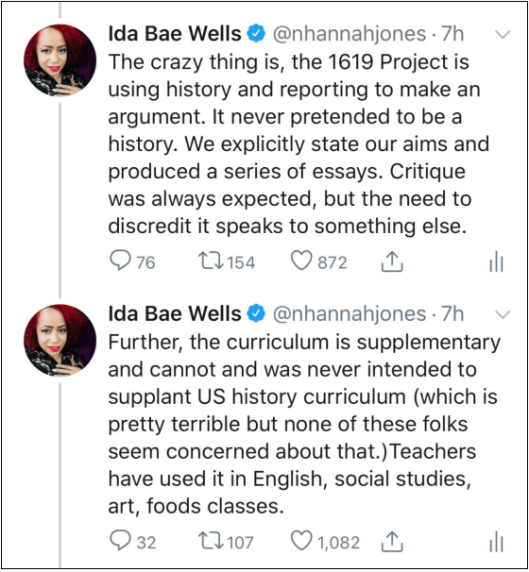 The project, its founder stressed, ‘never pretended to be a history.’

This seems an odd thing to assert now, considering Hannah-Jones herself claimed previously that the project is ‘American history, not black history.’ There is also the rather awkward fact that she and her cohort have spent no small amount of energy boasting about the number of historians who have contributed to the effort, whether with essays or fact-checking. In retrospect, I suppose it was stupid to assume that an initiative bragging of the number of involved historians was also a work of history.

Hmmm.  If it’s not history, why has the NYT prepared and marketed materials for school history classes? 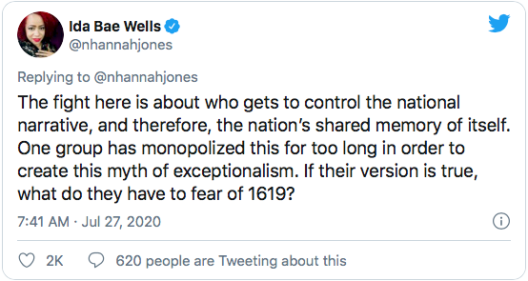 The fight here is about who gets to control the national narrative, and therefore, the nation’s shared memory of itself,’ she continued this week. ‘One group has monopolized this for too long in order to create this myth of exceptionalism.’

Ah.  Finally a bit of truth.  America is not exceptional; America is evil, and slavery and whiteness are at the root of America’s evil.  What do we have to fear?  Lies sold as historical truth?

I am not sure what is confusing about this, she continued, responding to critics who were reasonably confused by her description of the project and its stated goals. ‘I am not an historian. I am a journalist. The 1619 Project involves historical research, reporting, and argument to tell a story about the modern legacy of slavery. Historiography does something completely different.’

I’ll try to translate this into rational English.  Reporting on things that didn’t happen is fake news—a lie.  Arguing for the truth of lies is dishonest and immoral.  Hannah-Jones is indeed “telling a story,” alright, and it’s a whopper.  Consider this definition of Historiography:

1) the body of literature dealing with historical matters; histories collectively.

3) the narrative presentation of history based on a critical examination, evaluation, and selection of material from primary and secondary sources and subject to scholarly criteria.

Hannah-Jones is even trying to lie about the term.  Note the definition emphasizes “scholarly criteria.”  At one time, that would have meant a search for objective, supportable, replicable truth based on “primary and secondary sources” rather than telling a false political narrative.  Sadly, scholarship isn’t what it once was.  You might wish to take the link to my aforementioned article to see that point explained in some detail.

Uh just a moment, please.  Claiming the central point of America is slavery, and its true founding was in 1619 is not “the origin story,” merely just another story?  If that’s the case, what’s the point of The 1619 Project?

Hint:  It’s not history, and it’s not fact, which leaves…?

2 thoughts on “The 1619 Project: The Non-History History”