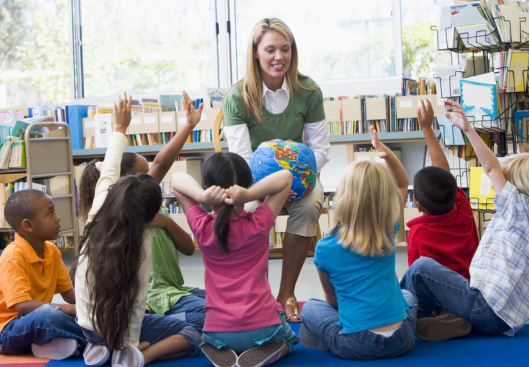 Schools across the country—yes, I’m being optimistic—may be opening within a month, but the D/S/C left, which includes teacher’s unions, is resisting opening schools.  Every sentient educator knows “online” or “distance” learning for K-12 is a fraud.  It’s all but worthless, and kids learn little or nothing, if they bother to participate at all.  Yet, the Left is determined not to let this particular crisis go to waste, as Kemberlee Kaye at Legal Insurrection reports:

In California, the United Teachers of Los Angeles have an even lengthier list of demands. From Capital Research:

Conveniently, the United Teachers of Los Angeles (UTLA), the teachers union in Los Angeles Unified School District, has all but admitted this—minus favorable reference to the missing-presumed-dead Hoffa. In a report titled “Same Storm but Different Boats,” the union demands, among other things:

*An additional $500 billion in federal funding,

*Government-run Medicare for All,

*An increase in the California state income tax,

*A ban on new charter schools, and

*Public benefits for illegal immigrants as part of the plan to reopen schools.

But it’s For The Children™, right? 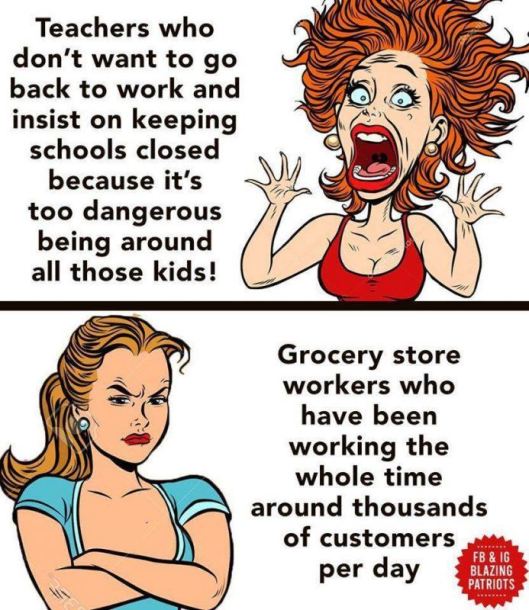 Oh, of course it’s for The Children.  I’m sure people like this argue children can’t learn without social justice.  This is not only nonsense, it’s educational fraud.  Even my high school students knew virtually nothing about politics.  In fact, I was controversial for a day or two in Texas:

Did you know, gentle readers, I was once accused of political bias in the classroom?  It’s true. It was quite the story for a day or two in the Dallas/Ft. Worth Metroplex.  What did I do to be so newsworthy?  Did I make kids worship Donald Trump?  Praise Barack Obama as a messiah?  Write mean texts to Hillary Clinton? I presented, in one 40-minute lesson, the differences between Republican and Democrat policies.

Contemporary teenagers, you see, know virtually nothing about those differences.  Most have no idea whether their own philosophies– if they have any philosophies at all–are more Republican or Democrat.  I’ve therefore found it necessary to provide that small bit of information prior to dealing with the media–a state requirement–the Constitution and Declaration of Independence.  That’s what kind of evil, political partisan I am.  In that tempest in a teapot controversy, I understood what President Trump means by ‘fake news.’

That attempt to gin up controversy failed.  My principal and superintendent realized I was doing exactly what any competent teacher should do.  They didn’t bother to tell me not to do it again, and I did, as usual, without any additional publicity.  The point is, if even high school kids are clueless about political issues, kids in the lower grades are even more clueless, and even more intellectually, developmentally unable to deal with such abstract concepts.  Wasting class time on political indoctrination is educational malpractice of the worst kind because it denies kids the educational opportunity they are due.

My favorite Bookworm has some thoughts on the issue:

I can think of three short-term reasons for leftists, in the form of teachers’ unions, to wage war on public schools:

The people who are mad with fear about the virus are also the people who think that Biden can actually make it all better. They’re true believers and they’ll accept without a trace of cynicism that the day after Biden’s election the madness will stop, not because this was all a political game but because the evil Trump will have been defeated.

It is indeed a political game, and D/S/Cs think they can win it, but only if they can seize ultimate political power, and trying to harm Americans as much as possible seems to them like the path to that power.  Consider this from Powerline:

It seems almost incredible that in a number of states, serious consideration is being given to keeping the public schools closed in the Fall. Given that the coronavirus is rarely dangerous to children–less so, in fact, than the average seasonal flu–it is hard to understand the rationale for continued school closures.

The most commonly offered excuse is that the children may infect teachers. Presumably that is possible, but a U.K. epidemiologist said yesterday that “Scientists are yet to find a single confirmed case of a teacher catching coronavirus from a pupil anywhere in the world.”

Teachers’ unions are the main proponents of continued school closings, apparently because some teachers and administrators would like to be paid in full for working relatively little. The impulse is understandable, if not commendable. As usual, teachers’ unions are happy to throw kids under the bus.

How much of American education is under the sway of teacher’s unions?  It’s harder to know than one might imagine.  The National Center For Education Statistics takes a stab at it, and notes the results of a 1999-2000 school year survey, which indicated about 77% of teachers were in a union or an “employee association.”  This is not actually revealing.  Twenty-seven states are “right to work” states, which means no school district in those states can be forced to recognize or deal with a union unless it wants to.  In those states, and others, only employee associations exist.  These are organizations that, for a fee, provide legal advice and help, as well as lobbying support in the legislatures.  They cannot collectively bargain, and have no ability to force their will on school districts.  Knowing teachers will have legal representation does tend to have the salutary effect of preventing unethical educrats from denying teachers due process.   However, unions, and employee associations are two very different animals.

The Bureau of Labor Statistics tells us local governments are 39.4% unionized, which includes teachers.

In 2019, the percent of wage and salary workers who were members of unions–the union membership rate–was 10.3 percent, down by 0.2 percentage point from 2018, the U.S. Bureau of Labor Statistics reported today.

And consider this from USA Today (to whatever degree anything they write can be believed):

In 2014, about 49% of teachers, or about 2.5 million, were covered by unions, down from 50% in 2013 and 53% just a decade ago, according to the federal Bureau of Labor Statistics. In 1984, teachers union coverage was 64%. A teacher in a unionized school district can get some benefits without joining the union.

I seriously doubt those numbers.  We can be certain union influence is very high in blue states, and low in red states, but we cannot be certain just how pervasive it is.  The D/S/C media tends to report favorably on anything going on in blue states, or at the least, covers up the bad, so we find ourselves thinking unions have more power than they actually do nationwide.  However, even if only 25% of American schools are unionized, that’s a great deal of potential damage.

We also cannot be certain of the actual medical risks because the media exaggerates the danger, partly because they tend to push sensational headlines—“if it bleeds, it leads”–and partly because they’re doing everything they can to harm President Trump.  The invaluable Heather MacDonald provides perspective:

It was already clear when these crushing mandates started pouring forth that shutting down every corner of the country was a reckless overreaction. By mid-March, two weeks before the Imperial College model was published, Italian health data showed that the coronavirus was terribly lethal to a very small subset of the population—the elderly infirm—and a minor health problem to nearly everyone else who was not already severely ill. The median age of coronavirus decedents in Italy was 80, and they died with a median of nearly three comorbidities, such as heart disease and diabetes. The lead author of the Imperial College model has admitted that up to two-thirds of all coronavirus fatalities would have died from their comorbidities by the end of 2020 anyway.

We haven’t heard much about that reality, have we gentle readers?

By now it is impossible to attribute the media’s failure to publicize the facts about the coronavirus to mere oversight.

Every story that does not mention, preferably at the top, the vast overrepresentation of nursing home deaths in the coronavirus death count—above 50 percent in many countries and 80 percent in several of our states—is a story that is deliberately concealing the truth. Casual readers and viewers have been left with the false impression that everyone is equally at risk, and thus that draconian measures are justified. 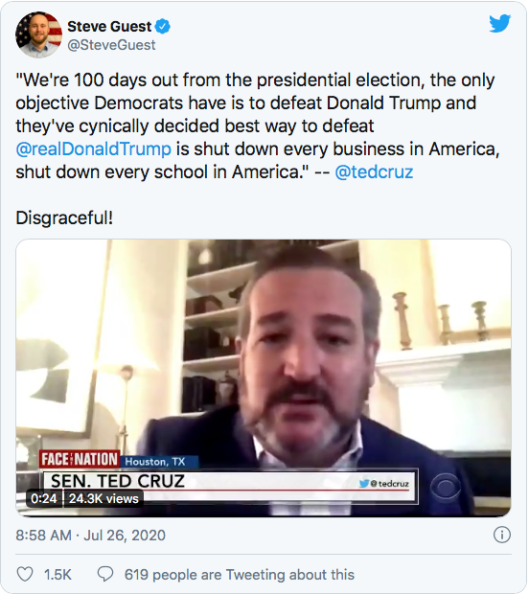 Keep in mind a substantial portion of teachers, and educrats particularly, everywhere, are members of the D/S/C continuum. In blue states, the proportion is higher, and actual learning is often a distant second to political indoctrination.  In red states, the proportion of D/S/Cs in education is lower, but never zero, and the focus is much more on learning.

Why do unions—and keep in mind they are exactly in lock step with the D/S/C Party—want to keep schools closed?

1) They’re not letting a manufactured crisis go to waste.  They think they can use it to harm President Trump, which means harming Normal Americans for daring to oppose them.

2) They know 2020 might be their last chance for a long time to gain ultimate political power, and with it, the ability to ensure they never again lose federal power.  Absolute Democrat rule has worked so well in major cities, they want to take it national.

3) Unionized teachers in blue states often tend not to be—what’s the term? Hard workers?  Yes.  That’s it.  They’re quite comfortable with getting the same wages—or more—for much, much less work.

4) They really do hate Normal Americans, and that means the children of Normal Americans.  I’ll give the an undeserved benefit of the doubt and say they do care about children, they just care so much more about their political goals and principles, and they can’t stop themselves from trying to impose them on everyone—especially children. 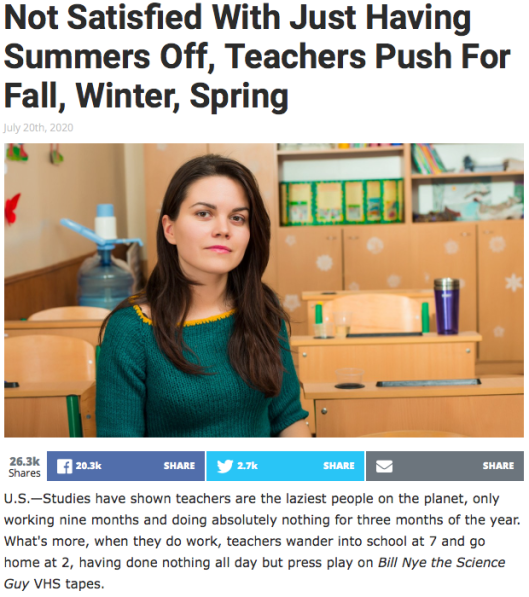 Perhaps I’m being too hard on these people.  Perhaps they really do care deeply for The Children.  They just care much, much more about their social justice, anti-America agenda, which tells you pretty much everything you need to know.

1 thought on “School Closures: Everything You Need To Know–UPDATED”