Nation:  a territorial division containing a body of people of one or more nationalities and usually characterized by relatively large size and independent status…

Anthem:  a song or hymn of praise or gladness; a usually rousing popular song that typifies or is identified with a particular subculture, movement, or point of view…

Spiritual: of or relating to sacred matters; ecclesiastical rather than lay or temporal; concerned with religious values…

Why the definitions?  Because the NBA has gone full woke.  Never go full woke.  The New York Times celebrates: 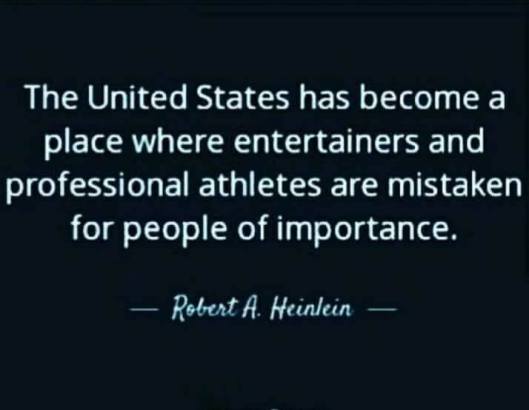 The NBA’s plan to highlight social-justice issues when play restarts reportedly will start from the ground up.

The courts that will be used for games at the ESPN Wide World of Sports Complex near Orlando, Fla., will have ‘Black Lives Matter’ painted on them, ESPN reported Monday.

The NBA will use three arenas at the Disney site as 22 of the league’s 30 teams conclude the regular season beginning July 30.

NBPA president Chris Paul, an Oklahoma City Thunder guard, recently told ESPN that the players got permission from the league to wear words promoting social justice in place of their names on uniforms. [skip]

According to Paul, phrases such as ‘Black Lives Matter’ or ‘I Can’t Breathe’ or the names of George Floyd, Breonna Taylor or Ahmaud Arbery could be seen on uniforms.

I can just see the play by play:

Former ball player #1:  “And that’s another three pointer by “up yours pig!”

The WNBA is following suit:

The WNBA also might follow the NBA’s lead and put ‘Black Lives Matter’ on its courts at the IMG Academy in Bradenton, Fla., for its 2020 season, according to ESPN.

The NFL will reportedly play ‘Lift Ev’ry Voice And Sing,’ which is also known as the black national anthem, before every Week 1 NFL game in the 2020 season, according to ESPN. [skip]

According to the ESPN report, the song will be played before ‘The Star-Spangled Banner.’

This is a real surprise:

Many players have been vocal about their stance on this topic. Washington Redskins running back Adrian Peterson, Arizona Cardinals quarterback Kyler Murray, and Cleveland Browns quarterback Baker Mayfield already have said that they will kneel for the national anthem.

Like the NBA, that’s not nearly enough of a poke in the eyes of fans:

The league and the NFL Players Association are also contemplating listing the names of victims on uniforms through decals on helmets or patches on jerseys, ESPN reported. The NFL also may produce educational programs about victims. They also have other plans that haven’t been identified.

The league hopes it demonstrates ‘a genuine commitment to the public, players and coaches and that player voices continue to be heard,’ according to ESPN’s source.

Of course, because there’s not nearly enough of that.  The poor players have been prevented from speaking at ever turn…what’s that?  They haven’t?  Oh.  The NFL Commissioner, and obviously, the owners, are trying to go beyond full woke: 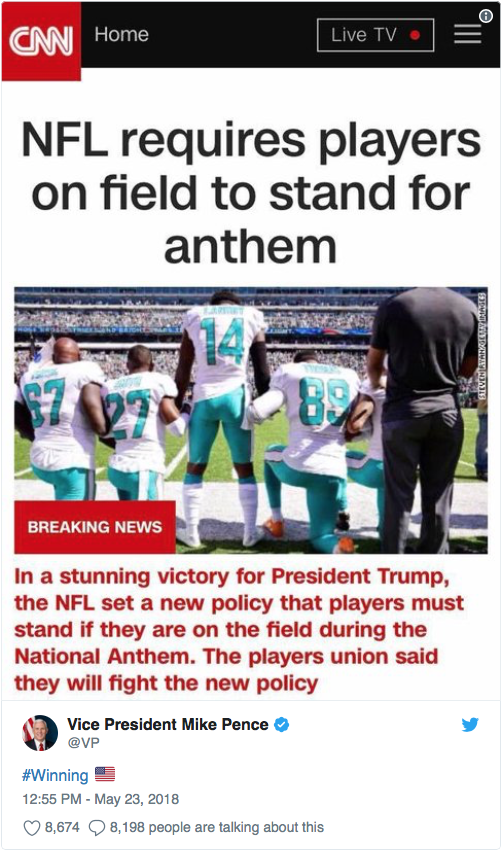 Guess this one is out the window…

NFL Commissioner Roger Goodell put out a video last month admitting that the league was wrong for not listening to their players when they knelt during the national anthem to protest racial injustice and police brutality.

‘We, at the National Football League, believe Black Lives Matter,’ Goodell said in the video. ‘I personally protest with you and want to be part of the much-needed change in this country.’

Uh, the NFL didn’t think the lives of black people mattered before all the racial agitation?  Is that why black players have been, for a very long time, paid millions and lauded as national heroes and role models?   Because they didn’t matter?  This is all so confusing.

‘Without black players, there would be no National Football League and the protests around the country are emblematic of the centuries of silence, inequality, and oppression of black players, coaches, fans, and staff. We are listening, I am listening, and I will be reaching out to players who have raised their voices and others on how we can improve and go forward for a better and more united NFL family.’

Now I’m really confused.  Besides the players, coaches, fans and NFL staff have been oppressed for centuries?  Where do I go to get that kind of oppression?

If you’d like to hear “Lift Ev’ry Voice And Sing,” here it is.  Here are the lyrics:

Lift ev’ry voice and sing,
‘Til earth and heaven ring,
Ring with the harmonies of Liberty;
Let our rejoicing rise
High as the list’ning skies,
Let it resound loud as the rolling sea.
Sing a song full of the faith that the dark past has taught us,
Sing a song full of the hope that the present has brought us;
Facing the rising sun of our new day begun,
Let us march on ’til victory is won.

Stony the road we trod,
Bitter the chastening rod,
Felt in the days when hope unborn had died;
Yet with a steady beat,
Have not our weary feet
Come to the place for which our fathers sighed?
We have come over a way that with tears has been watered,
We have come, treading our path through the blood of the slaughtered,
Out from the gloomy past,
‘Til now we stand at last
Where the white gleam of our bright star is cast.

God of our weary years,
God of our silent tears,
Thou who has brought us thus far on the way;
Thou who has by Thy might
Led us into the light,
Keep us forever in the path, we pray.
Lest our feet stray from the places, our God, where we met Thee,
Lest, our hearts drunk with the wine of the world, we forget Thee;
Shadowed beneath Thy hand,
May we forever stand,
True to our God,
True to our native land.

The version is the Mormon Tabernacle Choir with a full orchestra.  It’s a highly stylized, up tempo, choral version of the original, simple hymn.  In the third verse/stanza (it was written as poem and then put to music), the arranger turns closer to the work’s roots with a moving acapella rendition, before returning to a Broadwayesque, sledgehammer finish.  In racial terms, it’s about as white an arrangement/performance as one might imagine, so it must be–of course and inevitably–racist, and also cultural appropriation.  You can, of course, find a wide variety of versions of the original hymn, one even by Ray Charles, which is presumably not racist, though it’s certainly not hymn-like either. 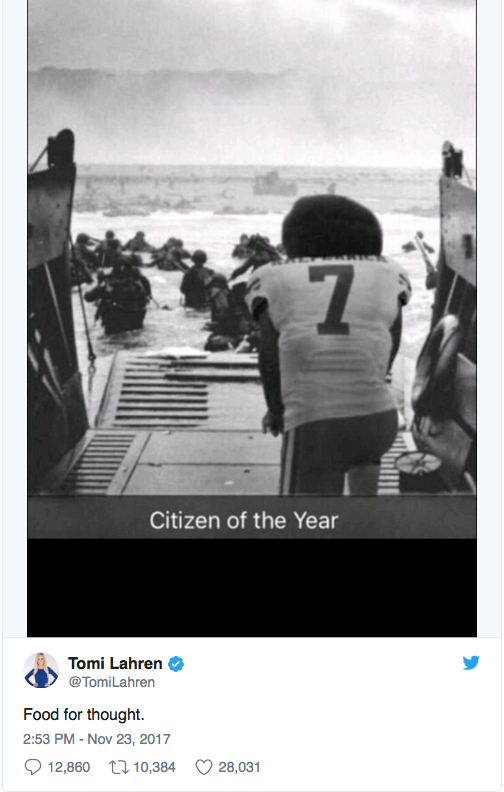 I do have a few questions: If this is “the black national anthem,” to which nation does it pay homage?  Does it have a flag, or is it sort of sharing one it often denies, burns and defaces?  One can easily identify the work with black people, but it’s really a hymn, or in its jazzier versions, a spiritual rather than an anthem in the vein of well-known national anthems.  So is it an anthem because someone is trying to claim nationhood or supremacy over others?  Isn’t supremacy or “mastering” bad?  Or is it a hymn, in which case it’s not secular, or a spiritual, which bears the same characteristics?  Even musically, I’m a bit confused.

Here’s a big one: have these painfully woke people considered they’re in business to provide entertainment to a rather specific audience?  Have they considered that audience, which did not for a minute appreciate football players behaving dishonorably toward the actual national anthem/flag, is really not going to like this wokey woke move?  Have they considered they will not see this as an attempt at diversity or equality, but as a purposeful and rather nasty “up yours” to the people who pay the bills?  Have they considered this will mean less profit—a lot less profit—which means lower or no salaries for the people without who there would not be an NFL?  Wouldn’t having to lay people off or lower the compensation be oppressive?  Or are they so dedicated to their cause–whatever it might be at the moment–they’re willing to endure any amount of sacrifice–other than actually shutting up and playing football, I mean?

One sort of wonders why they just don’t shut up and play football.  They’re getting paid enough, aren’t they?  Oh, I forgot; that would be oppressive and ancient history.  It’s so much better this way…