Mt. Rushmore holds special significance for me.  I was born in Rapid City, and like my father before me, served in the Air Force at Ellsworth Air Force Base, though he was in the Army Air Corps during WWII.  I served my final days as a police officer in the Rapid City Police Department.

I’ve seen Mt. Rushmore countless times, and liked the facilities better when they were closer to the land, less like pseudo-ancient Greek/contemporary DC architecture, but one thing remains: whenever I stand in the presence of those great men, when I look up at Gutzon Borglum’s monumental achievement, I experience a thrill of patriotic pride, and I’m indescribably glad to be an American.

Among my duties at the RCPD was SWAT, and on several occasions, when there were potential threats against Mt. Rushmore, we suited up and joined federal agencies in protecting the monument.  We didn’t  hang out at the visitor’s center, but faded into the mountains and woods surrounding it.  It was duty every one of us took deadly seriously.  As South Dakota’s Governor Kristi Noem recently said:

We may not have said exactly that, but not one of us doubted we’d do whatever was necessary to prevent any harm to “The Shrine of Democracy.”  There was no way to know, of course, just how serious the threats to which we responded were, but on our watch, all those years ago, Mt. Rushmore endured.

Then came 2020 and the Democrat/Socialist/Communist Party, which is far more Socialist and Communist than Democratic, and this threat:

The tweet was up only a short time, and of course, Twitter would never think of removing anything D/S/Cs have to say, but the backlash was so immediate and severe, the D/S/Cs quickly took down the tweet.

This is hardly the first time D/S/Cs have attacked Mt. Rushmore as racist, a monument to white supremacy.  I wrote on that topic in August of 2019 in Mt. Rushmore: Racism And Endurance.  A visit to that article may be worth your time.

Everything about it, including the periods, is a lie.  Mr. Trump has done nothing to restrict the voting rights of eligible voters.  Illegal immigrants, felons, non-citizens, the dead, those he doesn’t want to vote, nor should any American.  Every fake ballot dilutes the ballots of eligible Americans, and badly damages our system.  If American’s can’t be reasonably sure elections are honestly and lawfully conducted, all faith in our republic is lost, and the only resort left is to force.

OK D/S/Cs, let’s see the evidence President Trump “blocked critical pandemic relief.”  I suspect it will not be forthcoming.  Apparently they’re not aware we have a Bureau of Indian Affairs, which includes an extensive Indian health system.  Were Indians in any actual way being denied medical care, my experience in that part of the country tells me we’d be hearing about it loudly and clearly.  We’re not, and we’re not going to.

What Mr. Trump is doing is appearing at Mt. Rushmore for the Fourth of July.  The President of the United States is going to the national monument most identified with America to celebrate Independence Day.  Which part of that, I wonder, is “glorifying white supremacy”?  Does every American that celebrates Independence Day glorify white supremacy?

And what of the great men depicted on the mountain?  Which of them was a white supremacist?  Abraham Lincoln?  Does fact matter anymore?

So Mt. Rushmore is “desecration of stolen land.”  What does the D/S/C Party have to say about the Crazy Horse Monument, not far from Mt. Rushmore, also on “stolen land”?  Or is that allowable because it depicts an Indian?  What about the Indians of all the other tribes in that region that warred on each other?  Don’t they deserve a monument too?  Who is going to build that one?

There is one thing about which we can be certain this Independence Day: D/S/Cs are entirely insane, and they hate America and Americans.  I fear Jason Rantz is right:

A happy and reflective Independence Day to you all, gentle readers, a few days early.  God help us stave off chaos for another four years.

These are issues I addressed in Mt. Rushmore: Racism and Endurance.  To whatever degree you care about what The NYT has to say, take the link.  Donald Trump Jr. well addressed the issue: 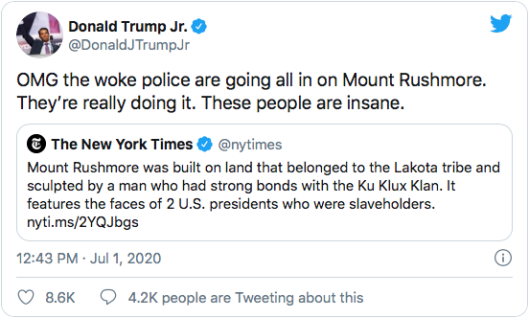 And Buck Sexton made perhaps the most pertinent point.  It’s lunacy to suggest wrongs committed centuries ago by people to whom contemporary Americans have only the most tenuous genetic linkage, or none at all, are actionable, morally, legally or practically, against them.  Suggesting otherwise indicates dishonesty in the extreme.

To whatever degree land “belonged” to an Indian tribe, ownership was determined by the strength and viciousness of whichever tribe could kill all others to take it.  If, gentle readers, you want to read about a president that actually used Mt. Rushmore, and every other national park, for crass, even cruel, political purposes, take this link to Mt. Rushmore’s Underwear from October of 2013.  An excerpt from that article:

Barack Obama has not only closed off the Mt. Rushmore parking lot and memorial–any two-bit deranged politician could do that–no, our political lord and savior is actually trying, by blocking off roadside parking areas, to keep us from looking at and taking pictures of Mt. Rushmore.  And of course, he has charged patrolling park rangers to prevent Americans foolish enough to have voted for him from stopping and so much as looking at the monument.

How empty the souls of those that can’t allow honorable Americans to enjoy the monumental accomplishment, the extraordinary beauty, the patriotic stirrings and the appreciation for those who have sacrificed so much to preserve liberty that is embodied in Mt. Rushmore.