The only complaint I have about Kurt Schlichter’s Kelly Turnbull series is I didn’t write it first.  Schlichter is an Army Colonel, attorney, author and commentator.  He post articles at Townhall.com on Mondays and Thursdays, which you should bookmark.

The four book series—I reviewed the first three here–is set in a near future America where the red and blue states have split.  Red America’s capital is Dallas, and the Constitution is very much in effect, with some interesting alterations, such as no one has the right to vote without honorably completing military service.  The blue—The People’s Republic—which is the title of the first novel in the series, is a third world disaster, beholden to the most insane, yet logical, manifestations of social justice and political correctness.  Kelly Turnbull, an Army officers, specializes in behind the lines missions of recon, or getting people out, back to liberty.  From my review:

The world Schlichter creates, set in the near future, is an entirely logical extension of what is likely to happen as Socialists continue to reject American constitutionalism, and in the process, demonize everyone that does not slavishly support their deranged, murderous, socialist worldview…

The People’s Republic is a standard, one each, socialist worker’s paradise. Everyone has varying personal pronouns.  The wealthy elite live behind walled, guarded compounds.  They have all of the things middle class Americans have always had, and more. Everyone else is a communist worker. Grocery store shelves are mostly empty, there are virtually no choices, toilet paper is rare, everything is broken down and falling apart, and food is scarce and rationed.  Everyone must carry ID, which identifies their privilege level. There is a federalized police force composed of criminal thugs–all the real police fled to the red states at the split–and a secret police force, charged primarily with keeping everyone in line.  Education is political indoctrination–lies about history and the reality of red America. There are reeducation camps, ubiquitous government brutality and oppression, summary executions, all the delightful trappings of every socialist state that has ever existed.  Schlichter didn’t need to make anything up, merely mirror the realities of socialism and take political correctness a very few steps beyond its current state.

Actually, since I wrote that review, PC and social justice have absolutely fulfilled Schlichter’s vision.  I continued:

Red America is very much like the constitutional America envisioned by the Founders, but there are several significant changes: immigration is strictly enforced.  No one gets in unless they are a net benefit to the nation; there is no welfare for immigrants.  No one is allowed to vote unless they serve in the military.  Food, gas, electricity, toilet paper, running water, all the trappings of modern civilization, unlike the People’s Republic, exist as they do now—in most of America.  As one might imagine, Red America is mostly Flyover Country, the traditional red states, while the always leftist coasts are the People’s Republic.

In this Second Civil War series, an always open question is what would it take to provoke a second Civil War?  What would cause the nation to split into blue—Democrat/Socialist/Communist—and red—American constitutionalist—states?  Since the death of George Floyd while in police custody, we’ve come closer still to an answer. 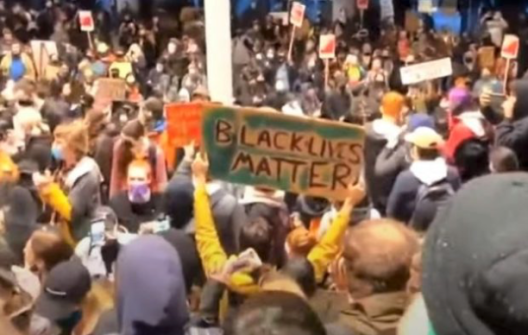 The already tenuous trust between Normal Americans and government has been further damaged by the resultant rioting, looting, arson, and violence, including murder not only of citizens, but police officers.  A large part of that loss of trust is the final realization the Coronaviris lockdown was a hoax, a political power grab.  It had little to do with public safety.  Anyone not staying home, wearing a mask and social distancing was, according to the self-imagined elite, at the very least complicit in murder—unless they were rioting, looting, etc.  Then, not only were they not killing society, their noble protest was saving us from ourselves.  Odd.  I’ve never thought of arson, assault, homicide and other related crimes quite that way, but hey, it’s for our safety.  They were mostly wearing masks, but they did that before wearing masks was cool, the better to get away with their crimes.

But it is not only the rampant lawlessness, but the feckless response of so many D/S/C politicians.  The worst of the rioting is, of course, in D/S/C ruled cities, which apparently have the worst systemic racism.  I joke.  The worst rioting is taking place in those desperate cities as I write because rioters know the chance they’ll ever be held accountable for their crimes is virtually nil.  In Minneapolis, the boy mayor ordered the police to abandon a precinct, which was immediately burned to the ground.  D/S/C politicians, and not a few fellow traveler RINOS like Mitt Romney, from the Congress to city councils, have spouted every D/S/C platitude and advocated every D/S/C lunatic policy, beginning with defunding or abolishing the police.

But the best indicator of how to start a Civil War is in Seattle, where Antifa, Black Lives Matter, and pretty much every thug available—I know, they’re the same thing—have seized and occupied a six block area of the downtown, including a police precinct, which like Minneapolis, was abandoned on the order of the D/S/C mayor.

Then, in a stunning turn of events, the City of Seattle made the decision to abandon the East Precinct and surrender the neighborhood to the protesters. ‘This is an exercise in trust and de-escalation,’ explained Chief Carmen Best. Officers and National Guardsmen emptied out the facility, boarded it up, and retreated. Immediately afterward, Black Lives Matter protesters, Antifa black shirts, and armed members of the hard-Left John Brown Gun Club seized control of the neighborhood, moved the barricades into a defensive position, and declared it the Capitol Hill Autonomous Zone—even putting up a cardboard sign at the barricades declaring ‘you are now leaving the USA.’

On the new rebel state’s first night, the atmosphere was festive and triumphant. Hooded men spray-painted the police station with slogans and anarchist symbols, renaming it the ‘Seattle People’s Department East Precinct.’ Raz Simone, a local rapper with an AK-47 slung from his shoulder and a pistol attached to his hip, screamed, ‘This is war!’ into a white-and-red megaphone and instructed armed paramilitaries to guard the barricades in shifts. Later in the night, Simone was filmed allegedly assaulting multiple protestors who disobeyed his orders, informing them that he was the ‘police’ now, sparking fears that he was becoming the de facto warlord of the autonomous zone. A homeless man with a baseball bat wandered along the borderline and two unofficial medics in medieval-style chain mail stood ready for action.

Various thugs are now armed with AR-15s, and are demanding ID of the thousands of citizens that live and work in the seized area.  There are reports of thugs extorting money from merchants, and of restricting the movements of residents.  Among the first things the thugs did was erect barricades—a wall.  Seattle’s political leadership has not been an example of strength:

The city government has not developed a strategic response to the takeover of Capitol Hill. According to one Seattle police officer with knowledge of internal deliberations, the city’s “’eadership is in chaos’ and ‘the mayor has made the decision to let a mob of 1,000 people dictate public safety policy for a city of 750,000.’ The officer said that Chief Best had dispatched high-ranking police officials to the autonomous zone to establish a line of communication, but the officials were immediately sent away by armed paramilitaries at the barricades. ‘The tide of public opinion is on the side of the activists and they’re pushing the envelope as far as they can,’ said the officer. ‘It’s not hyperbolic to say the endgame is anarchy.’

Politically, the Seattle City Council has already begun to champion the protesters’ demands. Socialist Alternative councilwoman Kshama Sawant declared the takeover a ‘victory’ against ‘the militarized police force of the political establishment and the capitalist state.’ Three councilmembers have signaled support for a 50 percent reduction in the police budget, with additional councilmembers likely to support a similar policy in the coming weeks. Sawant also opened Seattle’s City Hall—which had been closed by the mayor—to protesters, who immediately occupied the building. 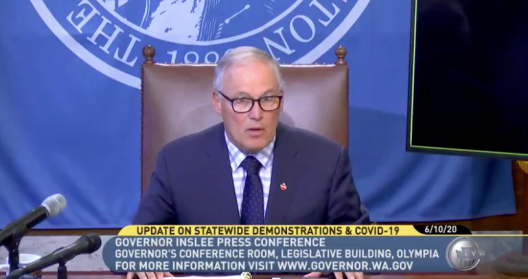 Washington’s Governor, Jay Inslee, claimed not to have heard of the seizure of a substantial portion of Washington’s largest city:

A reporter asked Inslee about the Capitol Hill Autonomous Zone during the governor’s press conference on Wednesday, noting that the Antifa militants had shut down part of the city and were ‘not allowing people to come and go freely.’ He did not mention the fact that antifa had commandeered the Seattle Police East Precinct.

‘That’s news to me. So, I’ll have to reserve any comment about it. I have not — I have not heard anything about that… from any credible source,’ Inslee said, with a chuckle. ‘Not that you’re not credible, it’s just before I espouse and opinion I should know of which I speak.’ He laughed again after giving this response.

Seattle Mayor Jenny Durkan said it is illegal and unconstitutional to put down the insurrection in her city, and compared it to a block party.

Again, it is significant the lawlessness is primarily confined to D/S/C ruled cities and states.  However, the issues, particularly those raised by the anarchy in Seattle, further inflame our increasingly strained union.   President Trump has noted he has the authority to restore order, and under the Constitution and various laws, he does, but it is an authority to be wielded carefully, and so he has. 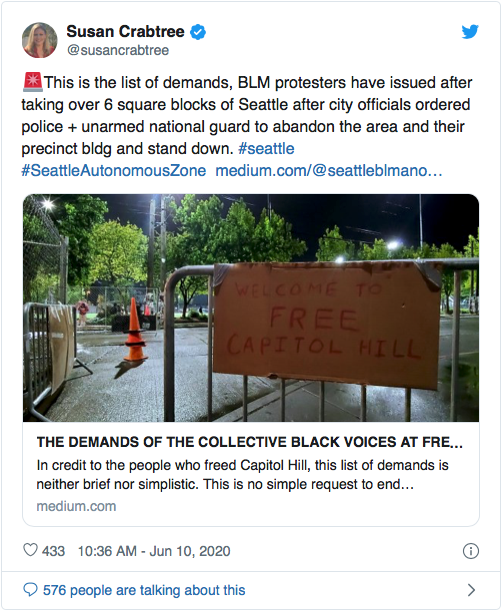 Keeping order and enforcing the law are primarily the responsibility of the states, so when politicians solemnly intone “we’re all in this together,” responsible Americans living in cities and states that do not countenance this kind of anarchy think, “no we’re not.”  The Seattle Anarchists will almost certainly get almost anything they want, including amnesty for their crimes.  Seeing this, why wouldn’t Normal Americans think: “To hell with them.  They’re getting what they deserve.  They’ve raised and nurtured these thugs.  They’re just getting what they wanted, good and hard.”

One Seattle statute “protestors” have not, and will not, touch…

According to credible news reports—I know: practically an oxymoron—rather than supporting law and order, many Seattle residents have donated money, food and other supplies to the anarchists, so they can spit in America’s eye a good, long time.

Why wouldn’t Normal Americans, Americans who, while understanding that some police agencies need improvement, support the police, the rule of law, equal justice for all, and American Constitutionalism in general, be happy to see such people split from the union?  Let them make their own socialist utopia, the blue states, the People’s Republic of Schlichter’s fictional, but all too accurate, world.

The first responsibility of any mayor, governor or president is the safety and security of Americans.  Their duty is seeing the laws are faithfully and equally enforced.  When well funded and organized domestic terrorists seize a significant portion of a major city, including a police station, and local politicians not only refuse to respond, but enable and support the criminals, the rule of law is degraded, and Americans rightly worry about their security and the viability of the nation.

Should President Trump use his lawful powers, powers other presidents have used, to restore order in Seattle and elsewhere, he’ll be branded a dictator.  Should anarchists die in an attempt to resist and kill police officers or soldiers restoring the rule of law, the media will be only too glad to brand Mr. Trump a murderer.  After all, he’s been Hitler for years.  But if order is not restored, Americans can rightly wonder whether justice for all is nothing but an outdated slogan.

Americans are tired of being labeled White Supremacists and racists.  If you want a Second Civil War, if you want a split country, is this, finally, the way you do it? 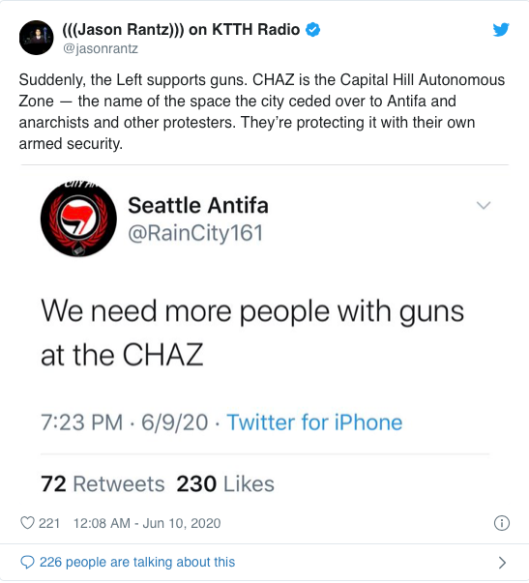 Mayor Durkan is on the case.  Here’s her response to President Trump: